Review: The Cartographic Imagination: Art, Literature and Mapping in the United States, 1945-1980

Review: The Cartographic Imagination: Art, Literature and Mapping in the United States, 1945-1980

Explicitly interested in interdisciplinarity, the two-day Cartographic Imagination conference brought together scholars of art, literature, photography, film, and architecture, facilitating energised conversation about what it means, and has meant, to ‘map’. Papers were impressively varied in reach and scope, covering landscape photography, the New York art scene, the refugee crisis, and maps of Disneyland. Though focused on the post-war period in the U.S., discussions, it seemed, could not help being drawn towards the present moment. This led to an animated debate about how cartography speaks to and shapes the theoretical and physical landscape of the contemporary moment. 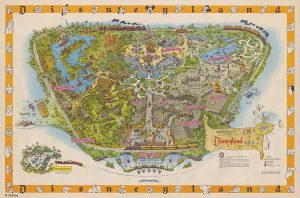 Links between the arts and social justice were apparent throughout a number of papers, most visibly in the two keynote addresses. Lize Mogel, the first of the keynotes, introduced her work as a counter-cartographer by talking through the political impulse behind her cartographic projects. These included a re-mapping of the UN logo, a community-led city map project in Sharjah, and the beginning stages of an ‘embodied mapping’ project, which uses people as figures to map the water system of New York City. Her focus on social justice set the tone for the conference, which considered both the conceptual resonance of cartography and the practical applications of rethinking the map. The second, jointly presented, keynote picked up these themes, framing cartographic social justice in terms of activism and the refugee crisis. David Herd (University of Kent) and Stephen Collis (Simon Fraser University) explored the way cartography plays into, but may also help to work us out of, the refugee crisis by way of a consideration of the Declaration of Human Rights, Charles Olson’s work, and the Anthropocene. Drawing together this network of texts, they offered a spatiotemporal analysis of what it means, and has meant, to be ‘human.’ They gestured to how the ‘nonhuman’ is figured within the declaration, and discussed how this categorisation affects and is affected by the delineation of borders. Interrogating this term, Herd and Collis increased the scale of their discussion to consider the ways cartography may be mobilised as a way to rethink our understanding of the ‘human’ into the future.

The keynotes posed questions about the artistic and pragmatic implications of both traditional and radical cartography, concerns which permeated every panel. Particularly striking were the responses to the panel I presented on, which discussed the cartography of contested landscapes of the American southwest. My paper discussed Rebecca Solnit’s textual remapping the nuclear landscape, while Louise Siddons’ (Oklahoma State University) discussion of Laura Gilpin’s photographs of the Navajo in the early twentieth century spoke to the ways Gilpin’s photographs of the Southwest reflect the land as understood via Navajo worldviews. Both papers were interested in the movement between social justice and figurative uses of cartography, and we talked in the Q&A about the ways histories of oppression and dispossession are both visible and concealed in the land and on the map via the ‘layers’ of the landscapes to which these texts refer. 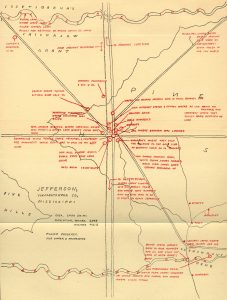 The relationship between map and territory was further discussed in ‘Cross-readings: Fictions, Arts and Maps in Dialogue,’ which spoke to the ways representations – of maps, of landscapes – may alter or lay claim to spaces. Fernando Quesda’s (Universidad de Alcala) discussion of performance and space in the 1970s considered the (re)claiming of architecture in urban spaces for theatre. Laurie McRae Andrew’s (Royal Holloway) paper read Thomas Pynchon’s The Crying of Lot 49 (1965) in relation to Sam McKim’s 1958 Disneyland map, and gave rise to a discussion about the didactic storytelling quality of this kind of map. She linked it back to the medieval mappa mundi, exploring the narrative function of cartography. In a similar way, Tatsiana Zhurauliova (University of Chicago) created a map of her own to discuss the beat generation’s New York via Tchelitchew’s Hide-and-Seek (1942) and Burroughs and Kerouac’s And the Hippos Were Boiled in Their Tanks (1945).  Onto a digital map of New York City, she plotted the geographical differences between the murder of David Kammerer and the fictionalised account of this murder in the text. Zhurauliova gestured towards the ways fiction alters or utilises the geographies of real events, considering this in terms of queer narratives and spaces by identifying the movement of the fictional crime to Greenwich Village, thus refiguring, or remapping, the real event.

Alongside the relationship between the map and the territory came discussion of that between map and text. In ‘The Cartographic Survey’ panel, Doug Haynes’ (University of Sussex) paper on levity and gravity in Pynchon’s Mason & Dixon (1997) discussed the verticality of space. Taking as a starting point de Certeau’s discussion of New York seen from above and on street level, Haynes highlighted how vantage points may alter an understanding of space and render it somehow textual. James R. Swenson (Brigham Young University) then discussed the Rephotographic Survey Project, via a history of landscape photography in the American west, considering how photographers played with the history and topography of both the land and their photographic source material to ‘remap’ a changing landscape. Yuko Yamamoto’s (Chiba University) reading of Faulker’s Yoknapatawpha County map interrogated the mapping, ownership, and the alteration of fictional space, gesturing towards Faulkner’s playful involvement with mapping his fictional county. The Q&A considered the potential for new or alternative cartographic methods borne out by the humour or playfulness each paper drew out of the (re)mapping they considered.

A panel on poetry and cartography, unified in its focus on ekphrasis, furthered the discussion of the relationship between map and text. Tara Stubbs’ (Oxford University) discussion of maps and postcards as poetics objects gave rise to a similar consideration of the relationship between image and text. Neal Alexander’s (Aberystwyth University) discussion of geology in Lorine Neidekker’s ‘Lake Superior’ considered the ways the literal rocks of the landscape are rendered within the poem to give an impression – a map – of place. And Daniel Katz (University of Warwick) offered some archival material on Jack Spicer’s map poems that also spoke to ekphrasis, by showing the link between numbered poems and page numbers on maps found among Spicer’s papers. By linking poetry to cartographic images, these papers gestured towards the ways these poets were able to invoke a temporal and spatial relation to place that connected their work to their world – as Katz put it, ‘the work never stands alone.’ 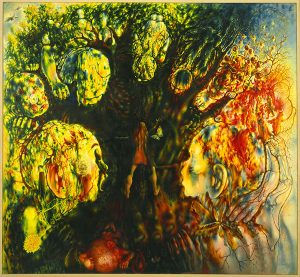 The closing roundtable served to galvanise the debates, asking how the formalist or aesthetic critiques of the map and the political or radical potential of cartography might be negotiated, leading to a broader discussion of how cartography may be mobilised in both senses. Through discussion about the increasingly hegemonic power of Google maps, conversation turned to how digital cartography simultaneously homogenises and individualises our experiences of place. Re-enacting or re-emplacing a sense of community thus became one suggested function for a new cartographic project, and gestured back to Mogel’s counter-cartography that began the conference.

As Will Norman commented at the conference’s close, the panels culminated in a kind of ‘productive disorientation’ in which we moved away from familiar maps in order to consider cartography – as method and as text – anew. Looking to the ways we are ourselves implicated in the power structures of the western cartographic tradition, there was a general sense in the room that only by reconsidering the power structures that underlie our very understanding of the map might we hope to rethink it and its place in both the aesthetic and activist character of the humanities.

Review of Culture and the Canada-U.S. Border 2014 Conference
Book Review: Against Self-Reliance: The Arts of Dependence in the Early United States by William Hun...
July #Bookhour: The Gringo Champion by Aura Xilonen (trans. Andrea Rosenberg)
Trauma, Code and 9/11: Reading Vulnerability in a Digitized Present
Emily Dickinson and the Nineteenth-Century Women Poets: The Poetics and Politics of Reticence
Review: ‘Collaboration in America and Collaborative Work in American Studies’
Conference Review: APG/BAAS Annual US Politics Colloquium
The Importance of Sherry Receptions; or, Where Are All The Women In This Archive? First Impressions ...