Chaired by the University of Oxford’s Research Fellow, Sonia Tycko, ‘Teaching Histories of Race in America to UK Undergraduates’ hosted virtually by the Oxford Rothermere American Institute (RAI) invited scholars and academics of racial history to attend a review panel characterised by a discussion on a pre-circulated collaborative bibliography, ‘America and Race: A Bibliography for UK History Undergraduates.’ This event provided an interrogation of key issues in pedagogy on the history of race among early American and US historians based in the UK.

The Black Lives Matter movement and the murder of unarmed African Americans including George Floyd and Breonna Taylor at the hands of the police within Trump’s America amidst a backdrop of institutionalised racism, has sparked the latest conversation for the need of social and education change. The official and unofficial removal of colonial and slavery statues across the globe has additionally triggered the need to redress and revaluate our understandings of our racial past. This webinar provided an opportunity for a re-evaluation and re-envisioning of what it means to teach race and the complications inherent in such a crucial and politicised topic. Drawing upon a wealth of knowledge and experience, the review panel which consisted of Dr. Uta Balbier (King’s College London); Yasmin Dualeh (University of Cambridge); Dr. Rachel Herrmann (University of Cardiff); Associate Professor Lydia Plath (University of Warwick); Professor Barbara D. Savage (University of Pennsylvania) and Professor Emily West (University of Reading) discussed both the problems and complications, as well as some solutions to, teaching race in today’s educational climate. 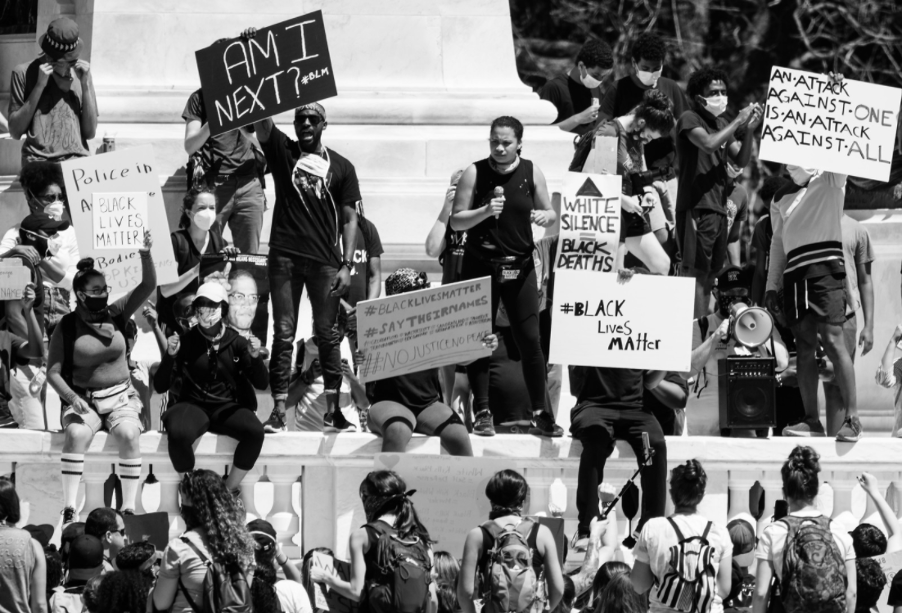 The review panel brought to light many key issues surrounding teaching histories of race within UK academic institutions. In particular, Emily West focussed the discussion on the stark inequalities present within UK academia. Many of the scholars agreed that the difficulty of teaching histories of race to undergraduates derives from a lack of racial and ethnic learning within narrow national school curriculums. From the omission of Black Tudors to the absence of the atrocities of the British Empire, and the UK’s involvement and profit from the enslavement of Black people, many students enter university unaware of both Black British and transnational racial history.

The literal “white washing” of history is further compounded by a lack of racial and ethnic diversity within university intuitions at an undergraduate, postgraduate and staff level. Yasmin Dualeh raised the issue of a lack of representation at university which became an important focus of the review panel who discussed the far-reaching consequences of a lack of racial modules available to students. The appointment of Olivette Otele, the UK’s first Black female history professor in 2018, demonstrates the lack of BAME representation among senior staff in universities and indicates the lengths still needed to achieve equal scholarly representation. Academia which is still heavily dominated by white males from the upper echelons of society will continue to create a barrier and challenge attempts to incorporate racial learning and other intersections of gender and class.

However, it was agreed that the facilitation of undergraduate racial dialogues provided students with a unique and important opportunity to interrogate our history and to debate how to best respond to the past in order to shape our future and inclusivity within the university community. Dr. Uta Balbier noted that the examination of similar and competing reworked definitions of race provided students with the opportunity to engage in critical conversations surrounding both the construction of race and critical race theory. It was suggested amongst the panellists that awareness of the lack of racial diversity within the classroom could be fostered through discussions relating to social constructions of whiteness to heighten their understanding of theoretical issues of race.

Questions from the audience raised an important discussion relating to how academics can connect learnings of America to British structural racism across geographical and chronological boundaries. The review panellists discussed the importance of transnational comparative work through the focus on the movement of people through immigration and connections forged through shared forms of resistance against systematic oppression and violence. Other questions emerged related to the difficulties associated with teaching undergraduates during the ongoing Covid-19 pandemic. The panellists stressed the importance of continued group work via social distancing or through virtual means in racial studies to spark respectful conversations and understanding amongst students.

There was an overwhelming consensus among the review panellists who stressed the importance of creating antiracist curriculums and reading lists to foreground teachings of race. Material representation may help combat a lack of education surrounding the UK’s intertwined past with race and the importance of digitised primary sources was equally acknowledged. Engagement with primary records, as stressed by Prof. Barbara Savage, provides students the opportunity to discover the history of racialised peoples more broadly. During a time of restricted social movement, sources obtained through virtual means can continue to foster awareness and more importantly ground an understanding into the institutionalised nature of racism.

The webinar ended with a discussion and review of what promises to be a critical new resource for undergraduates and teachers of race; the newly drafted ‘America and Race’ bibliography, directed by Sonia Tycko and coordinated by Amelia Hart. This collaborative project asks: What readings are most effective for teaching UK history undergraduates about race in America? The document aims to provide accessible historical insights into conceptions of race, the social construction of difference and resistance struggles in the combat against white supremacy and racist institutions. The bibliography draft which is organised chronologically and thematically from early America to contemporary United States, will be made publicly accessible on the Bodleian LibGuides website and represents a promising step forward in the attempt to diversify university learning. While important issues surrounding the bibliography were probed – such as the accessibility of the work for an undergraduate readership and whether it offers a truly complete learning of racial histories as a whole – the general attitude of the panel was one of positivity. Overall, the webinar highlighted the dire need for uncomfortable but important conversations within academic institutions to address the pervasiveness of race more broadly. The collaborated bibliography will make available for the first-time a student focused antiracist curriculum aimed to help address the many deficiencies present within university institutions today.

Erin Shearer is a PhD researcher at the University of Reading and the University of Cardiff, funded by the AHRC South West & Wales Doctoral Training Partnership. Her research focuses on enslaved women’s violence as a form of resistance in the antebellum United States South, highlighting in particular the need to challenge outdated perceptions surrounding female dissidence on slaveholding sites.
View all posts by Erin Shearer →
Tagged  Event review, History, Review.
Bookmark the permalink.