Review: Seventeenth Annual Conference of the Scottish Association for the Study of America

Seventeenth Annual Conference of the Scottish Association for the Study of America, University of Stirling, 5 March, 2016

Snow dusted the horizon on 5 March, 2016, as the Scottish Association for the Study of America –affectionately known as SASA – gathered at the University of Stirling for its seventeenth annual conference. Promoting the research of all forms of Americana, the SASA conference this year showcased the broad range of American Studies, History, and Literature, undertaken by doctoral, early career researchers, and established academics throughout Scotland and beyond.

SASA 2016 was focused around six panels, with a total of fifteen papers covering a variety of subjects. The organisers structured the running order to enable attendees to be present at both the first and last sessions, providing a pick of further panels across the remainder of the day. All delegates – both those presenting papers and the many people who attended – listened collectively to, and engaged with, exciting work-in-progress presentations. This structure reflected SASA’s ethos as a supportive community of Americanist scholars all eager to listen, share and discuss the research of peers.

The morning session began with a panel on, ‘Slavery, Racism and Segregation in America’, featuring papers focused on classical influence on proslavery thinking, African American abolitionist public speaking tours in Britain, and the complexities of streetcar segregation in Louisiana. All three papers utilised different primary sources; from classical literature to contemporary photographs and newspaper accounts. The most innovative presentation was delivered by Hannah-Rose Murray (University of Nottingham), who discussed her investigations into British audience responses to lecture tours given by former slaves from America. Attendees were particularly impressed with the way the paper complemented her work on Frederick Douglass and his antebellum lecture trips to Britain and Ireland, more of which can be seen at the ‘Frederick Douglass in Britain’ website Murray has established.

The mid-morning and early afternoon sessions were divided into more established American Studies and American History outlooks, reflecting the predominate disciplinary focus of this year’s papers. Attendees were treated to a choice of panels on either ‘American Literature’ – with insights into American satire and David Foster Wallace – or on ‘Cultural Memory and Identity in America’. Papers in the latter ranged from cultural memories depicted in the Confederate Veteran magazine to critiques of Native American cultural representations. The latter presentation, delivered by Dr. George Toth (University of Stirling), examined how Native Americans became icons who crossed the transatlantic cultural landscape through films, television and books, especially in West and East German depictions. Dr. Toth also introduced attendees to the sounds of Native American hip-hop, which became the topic of much lunchtime conversation.

The best presentation slide of the conference, courtesy of Dr. Malcolm Craig (University of Edinburgh)

The afternoon panels included papers on the themes of ‘Religion and Theology in America’ and ‘America in the Eighteenth Century’. Insights into 1700s America looked at colonial responses to piracy and the friendships of John Adams. The paper that created the most interest was Jonathan Singerton’s (University of Edinburgh) timely entitled presentation, ‘The (Habsburg) Empire Strikes Back!’ He took a sci-fi twist whilst drawing out the connections between Habsburg Austria and a galaxy far, far away, concluding with the bold suggestion that John Adams was the Yoda of his age.

On the concurrent panel there was more sci-fi in Benjamin Huskinson’s (Queen’s University Belfast) presentation, ‘Mormons and Time Lords: Redefining God in Religion and Science Fiction’. That such a paper could appear alongside presentations on the birth of Pentecostalism and Pro-Abraham Lincoln Irish Presbyterian sentiment indicates SASA’s all-embracing attitude towards American Studies. As their call for papers states each year, SASA conferences have no specific set themes but welcomes research on ‘literature, history, international relations, politics, religious studies, music, film studies’ and other related disciplines. This ethos, and the semi-informal feel of SASA gatherings encourages postgraduates and established academics alike to test their research and inter-disciplinary collaborations, such as those between history, religion, sci-fi, and diplomatic politics between countries and inter-galactic alliances.

The final panel brought all attendees into the twentieth century as SASA embraced its Scottish connections in the form of Laura Harrison’s (University of Edinburgh) paper. It posited new suggestions about the continual and historically inaccurate links between Scotland’s Declaration of Arbroath and the Declaration of Independence, North America’s passion for Tartan Day (6 April), and Scottish American identity. The day’s presentations were rounded-off by Dr. Malcolm Craig (University of Edinburgh), who managed to make nuclear weapons programme history both witty and informative.

The plenary lecture this year was delivered by Professor Brian McAllister Linn (Texas A&M University), current Fulbright Distinguished professor at the University of Birmingham. His engaging keynote paper, ‘Elvis’ Army: A Military Revolution in 1950s America?’ was premised on the question: ‘what the hell kind of army has Elvis Presley in it?’ He explored the transition of the US Army in the 1950s as it took on a new military identity readying itself for potential nuclear escalation. In particular he discussed how, “the army became the school of the nation” and a place for young American men, most especially in terms of gaining specialist technical education in communications and transport. Elvis’ presence as a draftee helped the public image of the military but also turned the singer/actor into a respectable all-round American icon. Conference attendees particularly enjoyed the accurate Elvis impression Professor McAllister Linn gave in his thanks at the end of his paper! 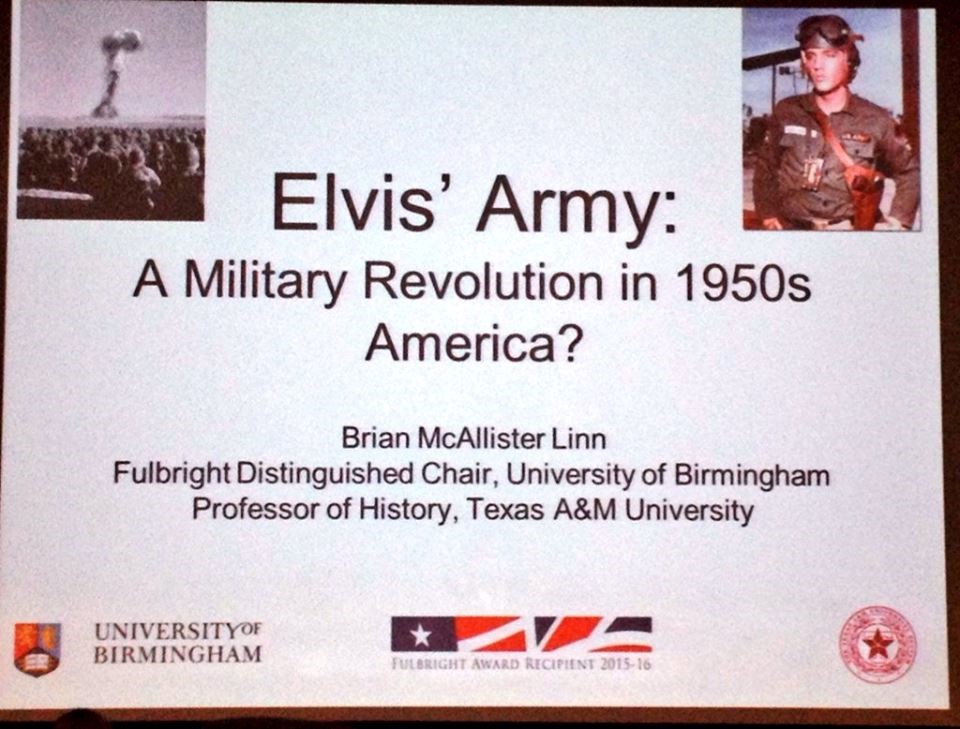 The conference this year also included extra guest speakers during the society’s AGM meeting. Principal Officer Susan A. Wilson of the U.S Consulate General in Edinburgh highlighted the connections between the consulate and those studying America in Scotland, as well as aiding American academics working in the country. A passionate historian herself, Wilson’s presence throughout the day and enthusiastic support for SASA were a boost to the society. Attendees also received a demonstration talk by Adam Matthew Digital on the use and access to their online American history primary sources. Adam Matthew also sponsored this year’s SASA essay prize for the best paper presentation delivered at the conference. The quality was so high that the award was divided between two excellent papers – Laura Harrison was the runner-up and Hannah-Rose Murray the winner.

In sum, ‘#sasa2016‘ was an overwhelming success. Speakers and attendees came from across Scotland, the rest of the U.K. and Ireland, highlighting the society’s reach and aim, ‘to reflect the range and vitality of American Studies in Scotland and beyond’. Those interested in seeing more of the events of the day can view a snapshot of social media coverage here. To find out more about SASA and to see the society’s day-to-day promotion of American scholarship, follow them on Twitter @ScotAmStudies. Many thanks to this year’s organisers at the University of Stirling for a fantastic day of American Studies and American History intellectual nourishment. Attendees left Stirling already looking forward to SASA’s eighteenth meeting next year.

Dr Catherine Bateson is a Lecturer and Tutor of American history at Durham University, where she teaches African America, Native America, slavery, political, social and cultural history. She specialises in the history and study of American Civil War song culture, particularly in relation to Irish American Civil War songs and music and their dissemination beyond the Irish American diaspora. She is also the Vice-Chair of the Scottish Association for the Study of America (SASA) and a co-founder of the War Through Other Stuff Society. Follow her on Twitter @catbateson.
View all posts by Catherine Bateson →
Tagged  C20, C21, Literature, Popular Culture, Presidents, Religion.
Bookmark the permalink.