Review: Scottish Association for the Study of America Annual Conference 2019

Review: Scottish Association for the Study of America Annual Conference 2019

After falling victim to the 2017 Beast from the East at St. Andrew’s, this year’s Scottish Association for the Study of America (SASA) conference was held in a thankfully snow-free Edinburgh and celebrated a special anniversary. Twenty years on from the society’s 1999 founding in an Edinburgh pub, SASA has become a highlight for those working in the fields of American Studies and American history both in and around Scotland. From its humble beginnings to an ever-expanding organisation and conference that brings together scholars from many nations at various career stages, and covering a plethora of interdisciplinary topics, SASA 2019 did not disappoint. With forty-two speakers and fifteen panel sessions, this year’s conference saw the largest number of presenters and papers, along with one of the highest attendance records. This not only shows the breadth of research being carried out, but is also testament to how special SASA is as a conference. 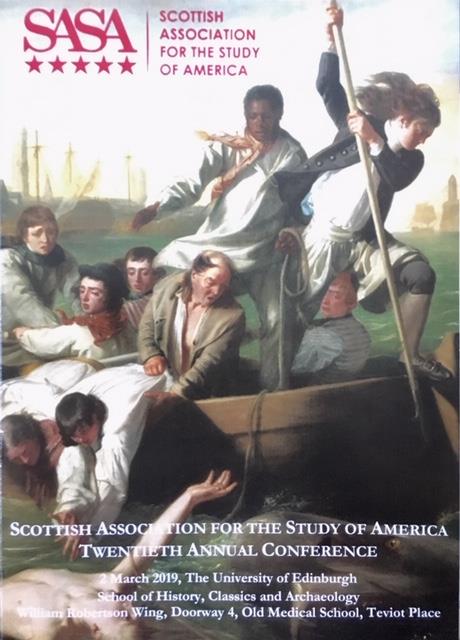 Indeed, there was a wealth of American studies and histories on display, particularly from this year’s largest contingent of postgraduate speakers. For example, Maria Marshall (University of Edinburgh) discussed the way American Civil War Lost Cause memory was reflected in Joel Chandler Harris’ stories, while Francesca Vavotici (University of Edinburgh) presented her paper on Maya Angelou’s radical feminism in her 1969 autobiography, I Know Why the Caged Bird Sings. As has perhaps become the norm at recent American studies and history conferences, Donald Trump was not too far away, and Ben Quail (Strathclyde University) analysed the president’s relationship with the media and advent of ‘fake news’. Respectively, Tim Galsworthy (University of Sussex) and Amanda Stafford discussed how the Gettysburg Address was used to shape American Civil War memory at the time of the 1964 Civil Rights Act and how regional identity impacted Georgia’s New Left 1960-1970s radical press. Several speakers combined race relations and politics to discuss various engaging topics, such as Maren Schafer (Heidelberg Centre for American Studies) talking about populist anti-authority rhetoric in American political discourse alongside Paul Young (University of Edinburgh) discussing black radical resistance. These issues were also under investigation in Kristyna Divisova’s (Charles University) paper on American presidential discourse. Virtually all presentations spoke to contemporary American politics, culture and society while also using the past to show that there is much to learn from previous histories and examples. If this is a small reflection on the state of academic discourse developing within wider American studies work, then SASA highlighted excellent current conversations. 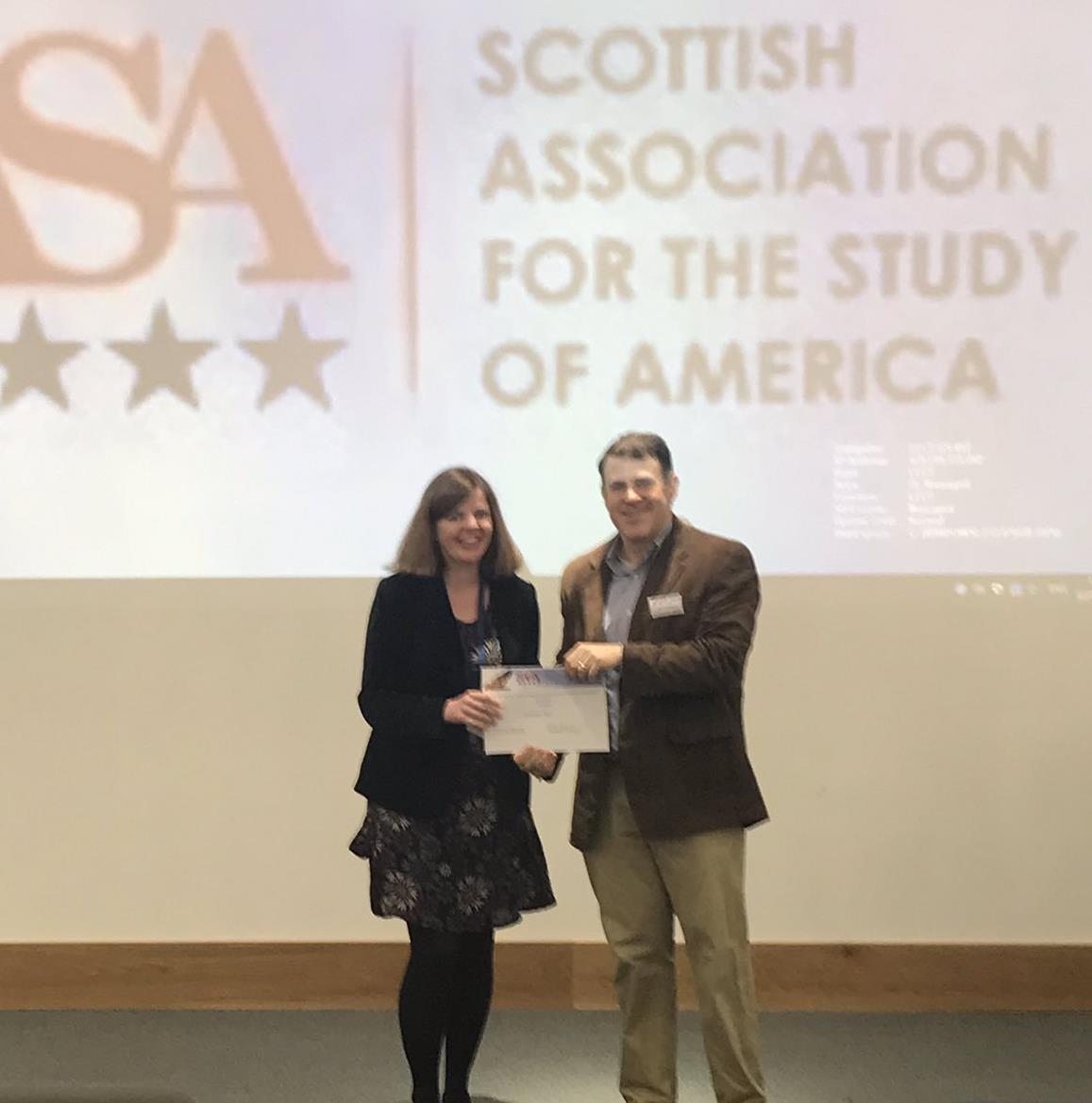 As ever, postgraduate attendees had the option to submit their presentations to SASA’s conference essay prize. This year it was awarded to Katherine Reed (University of Manchester) for her excellent paper on the contested citizenship of Italian-American anarchist, Michael Stoppiello, and discussion of Italian-American immigrant identity in the first decades of the twentieth century. Congratulations to Katherine and to all those who submitted work this year – the quality of entries reflected the high level of  papers heard at the conference. At the society’s AGM, the SASA committee announced that later this year another essay prize will be launched to enhance and celebrate scholarship on American gender and BAME topics – more details of this will be promoted in the autumn on the society’s continually updated Facebook and Twitter pages. The AGM also discussed SASA’s recent sexual harassment policy publication, approved by all committee members and conference attendees.

In celebration of SASA’s twentieth anniversary, a special roundtable discussion was convened at the conclusion of the conference to reflect on the last twenty years of the society. Past and current chairs and co-founders talked about SASA’s founding, its present incarnation and future directions, along with wider comment on the place of American Studies scholarship in Scotland and how the conference attracts those from far further afield. The roundtable was led particularly by SASA president Rhodri Jeffreys-Jones, who not only delighted the audience with discussion about the society’s founding and constitution writing, but also highlighted (with visual examples) how much the conference itself had changed in terms of size, breadth and programme length. He again reinforced just how far SASA has come, how it continues to promote and encourage American studies scholarship of all kinds, and how it is working to widen participation and inclusion at the society’s events for scholars of all levels. 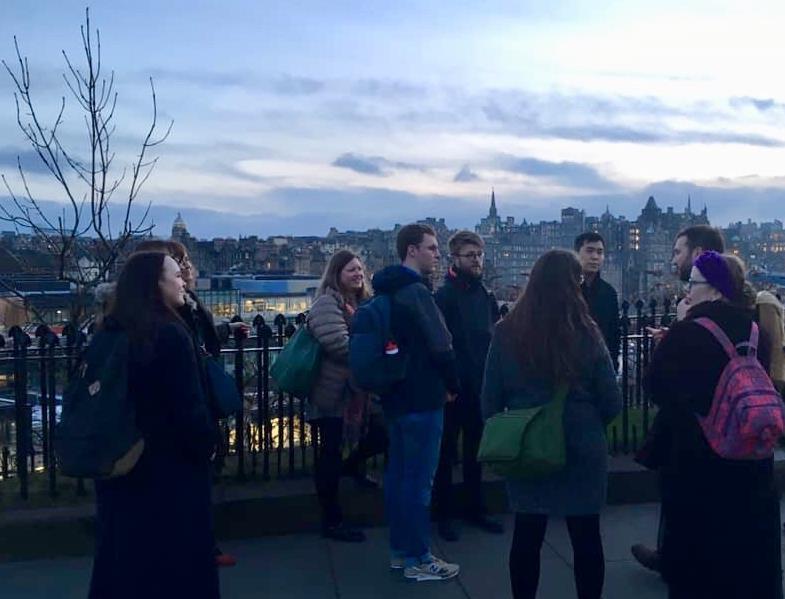 The Edinburgh African American Abolitionist Walking Tour, led by Nick Batho (University of Edinburgh), which attendees of the SASA Postgraduate Workshop enjoyed on the eve of the conference

On the latter point, SASA placed particular emphasis on postgraduate attendees and on graduate and early career realities in the British and American job market. The conference was able to offer several postgraduate travel bursaries this year thanks to a welcome donation from the St. Andrew’s Society of Hawaii. In addition, on the day before the conference the society’s Social Media Secretary Krysten Blackstone (Univeristy of Edinburgh) held a well-attended and useful Postgraduate Student Workshop, building on one run by the society in 2017. Attendees heard former and current SASA committee members discuss their own experiences of navigating the world of academic publishing, network creation, fellowships and funding, as well as a helpful question and answer session about pursuing American studies and history scholarship and careers beyond the PhD. The workshop ended with a brilliant walking tour of Edinburgh’s American abolitionist history led by Nick Batho (University of Edinburgh). This was much enjoyed by participants and helped to promote the university’s ongoing research into African American abolitionist history in the city, Scotland and wider British Isles.

There can certainly be no doubt after this year’s special anniversary conference, and the postgraduate workshop events, that SASA is in good health and reaches out to a range of scholarship and exciting scholars working on American studies and history in Scotland and beyond. We can only hope this legacy continues for the next twenty years and more. A massive thanks to the organisers of the workshop and the conference, in particular Krysten Blackstone, and to the University of Edinburgh for hosting this year’s events. Upcoming details on SASA 2020 will be on the society’s social media pages in the next academic year.

Review: 'American Communities: Between the Popular and the Political'
Review: Russia in American Literature
"Be broad, be bold and be aware": Review of the 2014 HOTCUS Postgraduate and Early Career Researcher...
Review: Quill Project Launch and Digital History Conference, Pembroke College, Oxford
Review: European Association for American Studies Conference 2016
Edith Wharton Workshop
Review: Bluecoat 300: Charity, Philanthropy and the Black Atlantic
Review of the 1st Americas Postgraduate Conference at the UCL Institute of the Americas

Dr Catherine Bateson is a Lecturer and Tutor of American history at Durham University, where she teaches African America, Native America, slavery, political, social and cultural history. She specialises in the history and study of American Civil War song culture, particularly in relation to Irish American Civil War songs and music and their dissemination beyond the Irish American diaspora. She is also the Vice-Chair of the Scottish Association for the Study of America (SASA) and a co-founder of the War Through Other Stuff Society. Follow her on Twitter @catbateson.
View all posts by Catherine Bateson →
Tagged  C19, C20, C21, History, Politics, Transnationalism.
Bookmark the permalink.