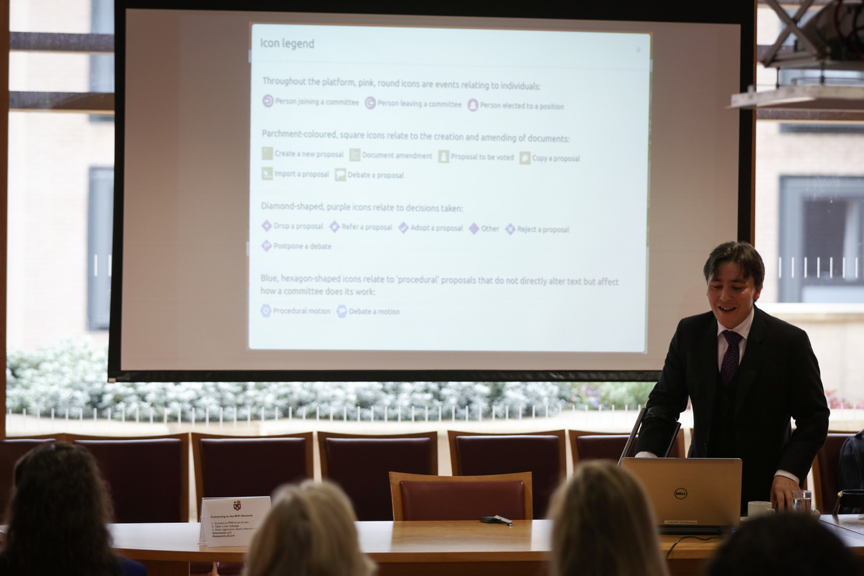 Last Friday, Pembroke College, Oxford hosted a conference to mark the launch of the Quill Project, a digital humanities project which aims to capture how committees negotiate texts. The launch showcased the project’s first endeavour: a model of the Federal Convention of 1787, which negotiated the United States Constitution. With an innovative software platform to present and explain, the day itself was a mixture of launch-event and academic conference. As a research assistant on the project, I was given a half-hour slot in which to talk about entering the data, using Max Farrand’s 1911 edition of the Convention records, and reconstructing the events of the Convention from the challenging sources left to us.

The day was opened by Dr Nicholas Cole, Quill’s inventor, who outlined the historical problems that the system intended to solve, the technical foundations of the platform itself, and sketched out the reasoning behind this new representation of the documents.

Understanding exactly what the process of negotiating the constitution entailed is a daunting task.  The platform was initially designed to handle a few hundred events.  An academic who is a world-expert on these records guessed that we had modelled about 800-1,000.  In fact, the model we presented contains close to 4,000 individual events.

‘Impact’ with a wider public, as well as providing a new tool for researchers, is one of the Quill Project’s central aims. It is a well understood problem that the more readable Federalist Papers are much more cited than surviving records of the Convention as a guide to America’s founding moment.  Quill hopes to make the Convention records at least as accessible, offering a search tool, document comparison, keyword links between moments in the Convention, external links to the manuscript sources, and, most importantly, the ability to let the reader see “the plan” as it lay on the secretary’s desk on any given day, or indeed any given moment within each debate, between 25 May and 17 September 1787.  It is a reconstruction made possible by the formal nature of the debate process itself, the pedantic detail of the surviving records (at least when read as a corpus) and the ability to adapt techniques from computer science to address the problem of reconstruction. 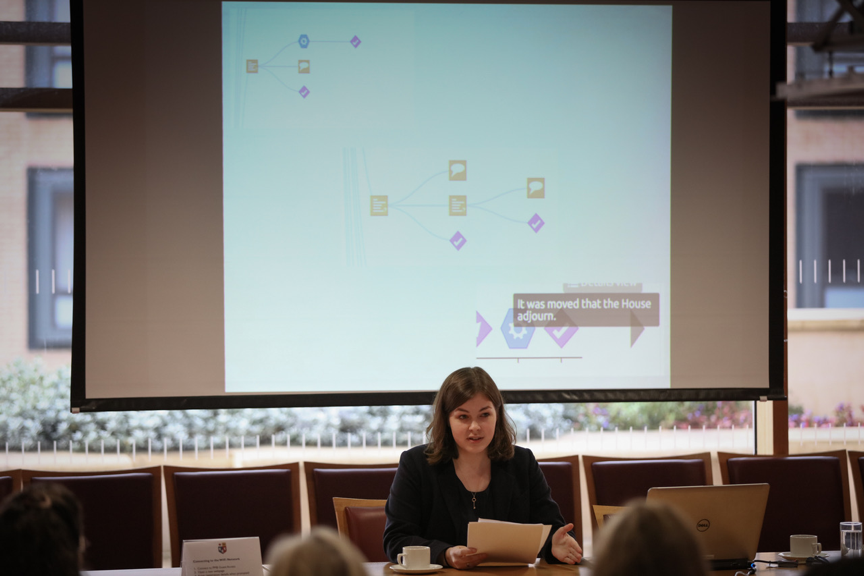 My talk explored the intricacies of data entry and the problem of using the sources, not simply to extract quotations or concepts, but to reconstruct an historical event in minute detail. I emphasized, in particular, the centrality of the Official Journal to our reconstruction, contrasting its dry but detailed account of collective procedure with James Madison’s Notes, which focused on the roles of particular individuals. Following the New York delegate Robert Yates, who wrote that he rarely expressed his opinions in speeches, “but constantly in giving my vote”, I stressed the value of the voting record, and the way that Quill offered up this most useful, yet underused data to the historian in new ways.

Next came a presentation from Julie Silverbrook, executive director of the DC-based Constitutional Sources Project, or ConSource. Drawing on her experience in manuscript digitization, she highlighted Quill’s potential significance in the context of civic education. A shocking statistic stuck in the mind: that only one third of Americans could name all three branches of government. While her remarks were aimed at conservative American audience members deeply concerned with the promulgation of ‘American values’, these fears over civic education also struck home among British audience members, whose faith in democracy had been sorely tested in this turbulent year. The Quill Project software had been designed from the start to integrate with platforms such as ConSource, and the two projects are working closely together.

Next came Dr Lynn Uzzell from the University of Pennsylvania, with a rousing defence of James Madison’s intensely scrutinized record of the Convention. Doubts over the veracity of Madison’s account resurfaced last year in the form of a Bancroft-winning book, Madison’s Hand, from Boston College professor Mary Sarah Bilder: Bilder revived claims that Madison’s later revisions of his 1787 notes had falsified the record, hence his request that they be published only posthumously. Dr Uzzell, by contrast, emphasised Madison’s desire to leave an accurate record, even to his own detriment.  Stirring as this rebuttal was, several audience members expressed concern at her peculiar faith in the infallibility of Madison and his apparently Rankean commitment to historical objectivity. 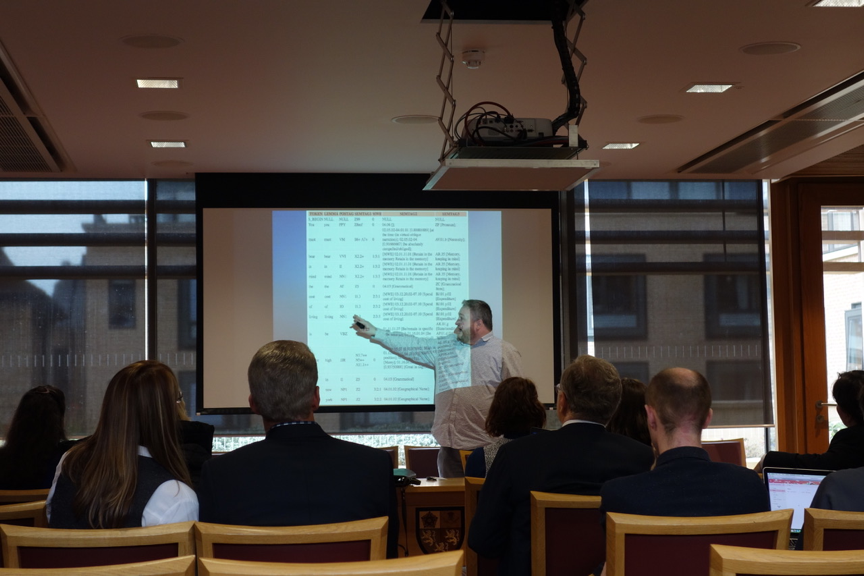 After lunch, the conference moved away from the Constitution and the Convention records, to place the Quill Project in the wider digital history project milieu. First came Professor Marc Alexander of the University of Glasgow, who demonstrated his application of semantic analysis to the Hansard Corpus with a presentation that was both fascinating and laugh-out-loud funny in a way that the subject matter might not immediately suggest. Professor Alexander took his work on the Historical Thesaurus of English and applied it to the Hansard corpus through semantic tagging, or the hierarchical linking of words by their relative meanings, in order to make searching through the corpus easier for scholars and readers.  Next on this panel came Dr Robert McNamee, director of the Electronic Enlightenment project, which, as part of Oxford’s own Bodleian Libraries, tends a vast online collection of personal correspondence, dating from the early 17th to the mid 19th century. This panel offered an opportunity to discuss the problems of making large datasets useful to both researchers and a wider audience.

Two early-career scholars now added their voice to the discussion. First came Dr Tom Cutterham, from the University of Birmingham, who provided a brief historiographical overview of the supposed conflict of interest between the Declaration of Independence and the Constitution. Moving on, Dr Daniel Peart, at Queen Mary, University of London, brought the debate forward into the nineteenth century by exploring the voting habits of and the varying roles played by different political organizations in the 1820s. In particular, he showcased research completed using online voting records. This tied into the conference’s focus on political practices, be they the ingrained habits of parliamentary procedure which the delegates carried to Philadelphia in 1787, the habits of political organization showcased in Peart’s study of Illinois before parties took hold of election campaigning, or the apparent decline of political participation in our own day.

To end the day’s talks, Professor Cole Durham of Brigham Young University, Utah, brought the focus back to the present day, drawing on his experiences as an advisor on international constitution-drafting projects in Nepal, Thailand, and Iraq. He demonstrated how Quill could be used, not simply to input historical sources, but to model the process of drafting a document in real time, allowing for a meticulous record of all of the changes to a text.

As a whole, the day aimed to confront the possibilities and limitations of digital platforms, both for scholarship and for broader public education, as well as setting the Quill Project’s presentation of these particular records in to three distinct contexts. Firstly, the current ecosystem of publications that present eighteenth- and nineteenth-century legal texts (an ecosystem addressed by ConSource, Marc Alexander and the Electronic Enlightenment); secondly, research questions in early American History; and lastly the challenge of engaging with a broader public and with younger scholars.

In general, the conference achieved a balance between historically rigorous research, an emphasis on digital innovation, and a concern for the present state of constitutional understanding.

Grace Mallon is a recent graduate of the University of Oxford. She is now studying for a masters in US History at University College, Oxford, and continues to work as a research assistant for the Quill Project at Pembroke College, Oxford. She hopes to focus her research on early American political history and international receptions of American political thought. Her other interests include the history and culture of German-speaking peoples.
View all posts by Grace Mallon →
Tagged  C18, Constitutional History, Digital Humanities, United States Constitution.
Bookmark the permalink.