From 24-25 April the Irish Association for American Studies (IAAS) held their annual conference at Trinity College Dublin.  The reviews are organised into two parts. The first is a reflection of the opening day of the conference, and the second reflects upon the closing day.

“Conferences are usually really intimidating. Everyone is ready to pounce if you make a mistake. It’s not like that here. I’ve never met academics who are so excited to hear one another’s research, instead of waiting to correct it.” These words were shared with me by an international doctoral student during pre-conference drinks at The Duke in Dublin. I quickly replied telling him that most conferences I have attended have been met with good cheer and great interest. Yet it got me thinking specifically about the IAAS annual conference. This year’s theme, focusing on sight and vision, reminded me how hard it often is to see eye-to-eye with those you work with, and how seamlessly the hard work that is integral to this conference is carried out by those behind the scenes. During the breaks I often heard the excited discussions between attendees and finished panellists. It is not too far an assertion to say, however, that at ‘Sight Unseen’ this year, those who moved invisibly behind the curtain were the real stars of the show. 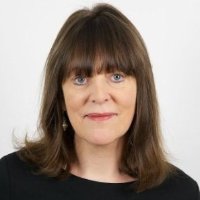 Dr. Lee Jenkins (University College Cork) was this year’s Alan Graham Memorial Lecturer. Her keynote was entitled,  ‘the seer and the spectacle’: the visual aesthetic of American modernism.

Usually in conferences, there are one or two panels that do not quite fit the theme. Not this year. Tied together by an excellent plenary from Dr. Lee Jenkins (University College Cork) it demonstrated the power that sight, surveillance, and vision possess on a multi-disciplinary scale. Jenkins’ Alan Graham Memorial lecture focused on sight in modernism. Specifically, how Ralph Emerson’s ‘transparent eye’ has shaped modernist philosophy on not just seeing, but incorporating the world around us into our true selves. Whether Charles Demuth’s I Saw the Figure 5 in Gold (1928), Marcel DuChamp’s Nude Descending a Staircase (1912), or the ever watchful decaying eyes of Dr. T.J Eckleberg in F. Scott Fitzgerald’s The Great Gatsby (1925), Jenkins demonstrated how sight philosophy shaped modernist art. In particular, how art shaped the visual interpretation of humanity’s surroundings. The themes unpacked by the plenary were reflected in the rest of the conference. The panels served to inform and educate on how we see sight itself – as a signifier, a privilege and, in the case of contemporary surveillance, both a safeguard and a threat.

Beginning on Friday 24th April with concurrently running panels, the only fault that could be found with the conference – and an indication of its success – was the impossibility of hearing every paper. To choose between a panel on ‘Spectacular Violence’ or, ‘Gender/Identity’ was not an easy choice. Opting for the latter, it soon became clear that what united this panel of disparate texts was themes of gendered passivity, fetishization, the male gaze and sexual obsession. Clare Hayes-Brady (University College Dublin) introduced ideas of female objectivity, and love versus possession in her discussion of The Virgin Suicides (1999). Applying these notions of consumption and gender to the theatre, Gavin Doyle (Trinity College Dublin) brought into question the uneasiness of gender ambivalence for the watcher of Patrick Shanley’s play, Doubt: A Parable (2004). Much like Sister Aloysius in Doubt, the reader/audience is the ever-watchful eye striving to define gender identity in the contemporary era. The theme of passive surveillance continued with Laura Byrne’s (Trinity College Dublin) expert identification and pursuit of voyeurism in Nabokov’s Lolita (1955). 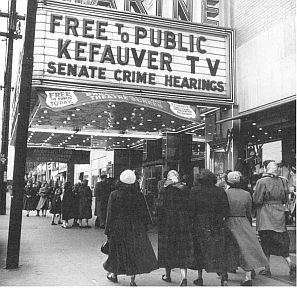 ‘[…]the Kefauver Crime Committee – the first hearings to be televised – was a testament to the impact media involvement in the political sphere has on public life.’
(Photo – M. Rougier/Life).

The quality of the opening panel reflected the high level of academic thinking at the conference. This was, however, at the crux of a repeated dilemma – which panel to attend next. In hindsight I was sorry to miss papers discussing, ‘Visualizing Texts’ which, I am told by my colleagues, included a stimulating analysis by Shiamin Kwa (Bryn Mawr College) of Michael De Forge comics. ‘Visualizing the Political’ however, was as equally thought-provoking. It gave historical insight into the influence visuals have on shaping political power. Indeed, Nerys Young’s (University of Ulster) paper on the Kefauver Crime Committee – the first hearings to be televised – was a testament to the impact media involvement in the political sphere has on public life. As a public spectacle, Young demonstrated how the hearings resulted in a public shutdown, with shops closing, housework ceasing, and films being cancelled in favour of viewing the committee meetings. The media’s impact on the political was a sentiment reiterated by Young’s fellow panellists, Gavin Wilk (University of Limerick) and Niall Gillespie (Trinity College Dublin) demonstrating that whether at home or abroad, America’s political landscape was undoubtedly shaped by the pressure of the public eye.

It is rare to attend such a multi-disciplinary conference and yet still find such strong a recurrent themes; race, sex, gender, class, and of course, the visual. My own paper was presented on Saturday’s panel ‘Writing the Self’, and it was a privilege to contribute to a conference which provided such engaging and diverse discussion of its central theme. The impact of sight and seeing on American culture both past and present is perhaps to be expected, however the conference highlighted just how implicit the visual is to humanity. Whether overt or covert, internal or external, surveillance is truly at the essence of the human experience, and I will, for one, certainly look forward to seeing my fellow colleagues again next year in Belfast.

Carolann North is a PhD researcher at the University of Ulster, currently completing her thesis on The Mythology of Us: Gender in Chuck Palahniuk’s Postmodern Fiction. She has spoken at a number of national and international conferences, most recently in Palma, Majorca presenting her paper Sister of the Mirage and Echo: Abjection, Nature and Patriarchal Distance in Graves’ Goddess Poetry. She has been recently published academically in Emerging Perspectives, and has contributed poems annually to Reflexion. In 2014, she curated the inaugural international conference Gender in the Twenty-first Century, hosted at the University of Ulster. Her previous research interests have included gender, postmodern America, Celtic mythology and North Korean Juche Literature.
View all posts by Carolann North →
Tagged  C19, C20, C21, Cultural History, Gender and Sexuality, Masculinity, Media, Politics, Surveillance, Television, Visual Culture.
Bookmark the permalink.