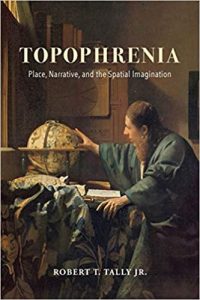 Cultural geographer Robert T. Tally Jr. publishes widely and frequently on many aspects of literary geographies, including the myriad forms of map-making. This book comprises his latest research and presents an excellent introduction to his work. Tally Jr. espouses the cartographic imperative: simply by being in the world, he argues, we map and reference our surroundings in an infinite variety of ways. Some material in this work, his latest essay collection titled Topophrenia: Place, Narrative and the Spatial Imagination, has been published before, but the sections on literary cartography and geocriticism have been extensively updated. As in his previous works, Tally aligns himself with canonical cultural geographers such as Yi-Fu Tuan, Edward W. Soja, Frederic Jameson and Henri Lefebvre. This study deserves credit not only for its illuminating critiques of their spatial theories, but also for its thoughtful consideration of the interplay between ‘objective’ space and ‘subjective’ narrative. The essay collection’s title, however, offers a clue as to what constitutes this work’s most important scholarly contribution: Tally’s apposite development of the concept of topophrenia.  By extending Yi-Fu Tuan’s oft-quoted idea of ‘topophilia’ (an individual’s joyous attachment to a specific place) to a more comprehensive concept that recognises the antagonistic, or uneasy relationships that exist between individuals and place, Tally Jr. arrives at topophrenia. This is a placemindedness that includes, by Tally’s definition, aspects of ‘dis-order’ and ‘dis-ease’ (9).

Topophrenia is divided into three parts. In Part I, Tally Jr. debates Bertrand Westphal’s tenets of geocriticism as formulated in Westphal’s Geocriticism: Real and Fictional Spaces (New York: Palgrave Macmillan, 2011), a work that Tally Jr. translated from the original French into English. In his discussion, Tally Jr. takes great care to distinguish his own use of the term from the geocritical approach espoused by Westphal and points out the latter approach’s limits: that a fixed focus on place complicates or prohibits the selection of works to be surveyed, and that a neutral, unproblematic focus on place is impossible, as each place is conflicted and marked by a variety of opinions and views.  Yet the value of geocriticism as an interdisciplinary research field, endures: ‘The shifting territories of the present’, Tally Jr. is convinced, ‘call for new maps, and new maps call for new readings’ (10). It is at this stage that Tally Jr. introduces Eric Prieto’s work to demonstrate what forms such new readings might take. ‘[B]y examining the ways that certain kinds of social space come into being as places for interpretation’, Tally writes, ‘this sort of geocriticism offers intriguing opportunities for understanding how literary representation and spatiality interconnect’ ( 63). Prieto’s research into emerging, often heavily frequented but neglected spaces such as public buildings, transport hubs and other spaces that fall in between defined categories, places he terms ‘entre-deux’ is indeed exciting, as entre-deux enquiries lead to what we can now call topophrenic spaces. For this purpose, reading Prieto’s full-length work, Literature, Geography, and the Postmodern Poetics of Place (New York: Palgrave Macmillan, 2013) alongside Tally Jr.’s Topophrenia is recommended.

Part II of Topophrenia teases out the relationships between place, space, and mapping by taking the reader on an eclectic journey of world literature throughout the ages. Miguel de Cervantes’ Don Quixote (originally published 1605) is surveyed alongside J.R.R. Tolkien’s The Hobbit (1937) and Daniel Kehlmann’s Measuring the World (2005), for example.  Particularly intriguing in this section is Chapter 6, where Tally Jr. compares and contrasts empirical and abstract knowledge in order to demonstrate the similarities between seemingly impartial maps and aesthetically constructed works of literature. The reasoning behind his approach to demonstrate similarities is clear: ‘Only the novel’, Tally Jr. contends, ‘projects, describes and figuratively maps the social spaces depicted and in some sense created in its pages. In a way, the novel is a sort of map, one that enables readers to orientate themselves and the characters, events, settings and ideas of the novel in the world’ (95).

Part III of Topophrenia progresses this argument further by considering the spatiality in fantasy and utopian literatures. It makes the case for an immersion into speculative fiction, coupled with the adoption of a geocritical approach, to arrive at a greater understanding of the worlds we do already know, as well as those still unmapped. In Tally Jr.’s words, such work ‘may thus embrace the strangeness of the contemporary world system, imagine radical alternatives, and descry – if only in uncertain, tentative and momentary glimpses – the features of other worlds’ (168). The narrative form of the novel is, of course, perfect for endeavours into unmapped territories as many novels subsequently inspre theatre productions, films, or graphic novels.

To scholars of the spatial turn, cartography, or literature, Topophrenia: Place, Narrative and the Spatial Imagination offers multiple perspectives into a subject that continues to intrigue the cultural imagination and produces exciting scholarship. As further reading, work by other twenty-first century cultural and urban geographers such as Jason Finch, Lieven Ameel and Amy Wells equally deserves a mention in this research area.

Christina Westwood is a PhD candidate at Keele University. Her research is in the field of spatial theories and literary geographies. Her areas of expertise and interest include the postmodern novel, American literature and literary geographies.
View all posts by Christina Westwood →
Tagged  Cultural History, Environmental History, Geography, Literary Criticism, Literature, Maps, Spatial Studies.
Bookmark the permalink.