Review of “The Market Logics of Contemporary Fiction” by Paul Crosthwaite 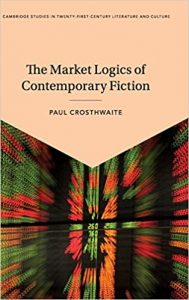 In The Market Logics of Contemporary Fiction, Paul Crosthwaite examines how contemporary fiction has ‘increasingly internalised the structures, dynamics and demands of market systems’ (2) at the same time that the contemporary literary marketplace has become inexplicable from the financial market and the global economy. The most striking aspect of Crosthwaite’s latest monograph is the delicate balancing of complex interpretations of the relationship between fiction and the market, and accessible, colloquial examples and frameworks through which the reader is invited to analyse this relationship. The result of Crosthwaite’s success in negotiating this balance is that Market Logics is an attractive and engaging read for both newcomers to the economic humanities and experts alike. This cross-applicability is evident from the opening lines of the introduction, where Crosthwaite uses the example of Tao Lin – a Brooklyn-based novelist who, in 2008, sold ‘shares’ in his then unfinished novel in order to generate publicity and comment on the marketability of contemporary fiction – to outline the overall premise of his wider argument regarding the subtle connections and exchanges evident between contemporary fiction and the market. (Despite commentators questioning the legitimacy of the transactions, and whether investors were actually getting anything for their money, all ‘shares’ in Lin’s book sold within 6 days).

Crosthwaite’s identification of a continuity of financial concerns in fiction, rather than points of break or rupture, throughout the various specific focuses of each chapter, also sets this work apart from other texts that tackle similar themes. Unlike other New Economic Critics, who argue that the rise in financial fiction is specific to certain, isolated moments across limited histories, Crosthwaite argues that finance and fiction have always been connected, and in ways that vary according to both the particular moment of financial history and the form of writing most popular at that same time. In doing so, Crosthwaite works to unite the claims of other, temporally-limited works into a cohesive timeline of financial fiction. Moreover, the use of this continuity to support claims regarding contemporary fiction allows Crosthwaite to explain, explore, and contextualize the key theories, critics, terminology, and financial innovations that build to inform the present moment. Again, this investigation of key ideas – such as Adam Smith’s invisible hand, the gold standard, fiat money, Jacques Derrida’s Specters of Marx (1993), neoliberalism, and the efficient market hypothesis – make Market Logics an ideal gateway text for new scholars interested in New Economic Criticism.

As a whole, Market Logics appeals to both ends of the academic spectrum, and excels in providing rigorous criticism of contemporary fiction, the financial market, and market metafiction (as the place where the two collide), without excluding newer scholars from its argumentative process. Moreover, the detailed history and explanations provided actively encourage new researchers into the field of economic humanities. The text’s key aim, which is, in Crosthwaite’s words, ‘to demonstrate that today’s widespread deployment of “market metafiction” did not come from nowhere and can be connected to important precedents and antecedents in the recent past’ (39), is met with clarity and an obvious sense of how these conclusions will positively impact the study of transatlantic literature and the economic humanities more widely.

The history of financial fiction that Crosthwaite plots builds to the monograph’s key focus on ‘market metafiction’, defined by Crosthwaite as:

a mode, evident across a varied array of narratives, which is concerned less with the fictionality of the text as such, and more with the ways in which that fictionality solicits or spurns the approval of the literary marketplace. Time and again in such narratives, this self-consciousness about the text’s market positioning is articulated via a profoundly ambivalent reckoning with the power of stock markets, currency exchanges, hedge funds, and trading algorithms – the most spectacular manifestations today of the market mechanisms that contemporary authors must learn to navigate. (3)

It is this examination of market metafiction as the collision-point between literary postmodernism and the ever-encroaching influence of the financial market that makes Market Logics stand out on the shelf, and which will sustain expert readers already familiar with the core aspects of financial history. Split into thematic chapters, Crosthwaite’s analyses covers the successes and failures of market realism, the emergence of avant-pop, so-called ‘literary’ genre novels, ‘systems’ novels, and literary occultism, with examples taken from the works of Bret Easton Ellis, Thomas Pynchon, Kathy Acker, Anne Billson, David Foster Wallace, Colson Whitehead, Teju Cole and Nell Zink, to name but a few. These literary phenomena – and persona – are, in turn, contextualised against their corresponding financial backdrops, with the shifting demands of the post WW2 literary marketplace, the post-credit-crunch rise of market deification, and the impact of mass data, all factored into Crosthwaite’s examinations. This analysis, in addition to focus-chapters on Iain Sinclair, Don DeLillo, Hari Kunzru, and Barbara Browning, appeals directly to scholars of transatlantic literature and provide critical readings of core texts that are otherwise missing from the wider canon of criticism.

Amy Bride completed her PhD in American Studies at the University of Manchester in 2019. Her thesis examined the intersection of race and finance in American gothic monster fiction of the twentieth and twenty-first centuries. Her recent publications include articles on Late-Capitalist Hyper-Gothic in the work of Bret Easton Ellis and archival research on the corpse-values of African American slaves. Her other research interests include technogothic, gothic transhumanisms, and financialized body parts.
View all posts by Amy Bride →
Tagged  American Studies, C21, contemporary literature, Economic history, Fiction.
Bookmark the permalink.