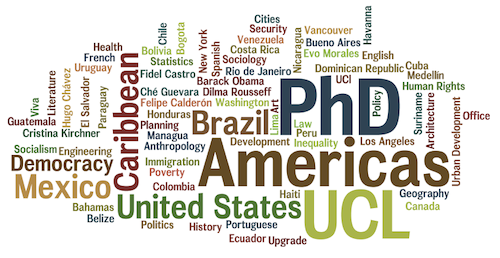 On 30 April and 1 May 2015, University College London’s Institute of the Americas (UCL-IA) hosted its 1st International Postgraduate Conference, organised by the UCL Americas Research Network. Established in 2013, the Network exists to facilitate interaction between postgraduate students working on any aspect of the Americas, with the aim of creating a dynamic, interdisciplinary community that can enhance the level of scholarship on that region. After successfully running a monthly seminar series throughout 2013-14, the Network planned the 1st Americas Postgraduate Conference for 2015. This two part conference review offers both an attendee’s review of the event and follows with a reflective post from the organisers. Together these two posts outline the research presented at the inaugural conference and what we can expect from the Network in the future.

This inaugural two-day conference organised by research students at the Institute of Americas (UCL) was a multi-disciplinary affair covering the whole of the American hemisphere with richly divergent papers addressing the widest parameters of the conference title. This was reflected not only thematically, but also geographically with sixty delegates from across Europe, a testament to the diversity of the conference program and theme.

With such wide-ranging discussions over the whole conference it was at first difficult to discern a cohesive theme, but as the second day came to an end a unifying motif emerged. Gramsci and his ideas around Social Hegemony hovered around many of the discussions, providing a connective thread. The form that control and power, exerted by the dominant culture, took and how it manifested within social and political system and the challenges to this, was revisited through many diverse approaches and academic disciplines.

In the panel ‘Political Power of Economic Ideas’ the delegates took as a central position the history and form of American capitalism, and the intrinsic power of ideologies and how these interacted with agents both of change and reaction. Many interesting questions were raised about causative factors and the role of contesting economic ideologies in creating a climate for political change, whether in the Guilded Age with the sway of protectionism over free trade (Peter Bent Oxford) or in the contribution of Walter Heller in promoting the validity of Keynesian measures to restore economic and fiscal vibrancy (James Hillyer UCL).

In ‘Minority Challenges and Cultural Resistance’ in the United States the papers provoked a wide-ranging discussion on how various civil rights movements overlapped and influenced each other and how the vocabulary of one movement transcended through the decades only to be met with a reformulated resistance. James Heath’s (Warwick) perspective on massive resistance to civil rights focused on South Carolina and its Senators’ procedural fights against the Supreme Court. Anthony Castet (Tour Univ) detailed how the campaigns and tactics employed for same sex marriage and the clashes between advocates on both sides of Proposition 8 in California illuminates how the Culture Wars as a concept retains potency. Challenges to street renaming in honour of Martin Luther King revealed the residual social power and symbolism in owing public places and how power resides in social inclusion and the owning of shared spaces (Martina Schafer Freie Univ Berlin).

‘Foreign Policies of Hemispheric Hegemons’ showcased the richness and variety of foreign policy studies and the academic response to the shifting and changing power structures of international relations within the hemisphere. The delegates used differing perspectives in exploring Obama’s foreign policy. This ranged from a discussion of the role of perceptions in understanding the level of terrorist’s threats (Anthony Teitler UCL) to that of Inter-American Studies in framing the changing relationship between the US and Latin America (Andras Lenart Univ of Szeged).

The closing panel was ‘Gender in the Performing Arts’ with Emma Horrex (Hull) looking at representations of female gangs through an appreciation of Mi Vida Loca, Eszter Hidasi (Eotvos Lorand Univ) on the iconography of Calamity Jane and Jennafer Small (Central Lancashire) exploring the career of Aida Overton Walker thorough the intersectionality of race and gender. The speakers thematically wove together the omnipotence of masculinity in defining control and power. Through cultural representations the overweening pull of normative vernaculars is challenged through a feminist critique from the screen and stage to form a vital contribution to a gendered culture of resistance to cultural hegemony. The ideas of Foucalt over power residing in what is allowed, acknowledged and appropriated by the mainstream was unmistakable.

The closing address by Professor Francisco Panizza (LSE) was a perceptive and wide ranging gaze across South America and its political direction during the last decade leaving the audience with many intriguing observations about the increasing (if uneven) democratisation and affluence of the region and what this might mean for the future. This was a fitting and very appropriate close to a conference marked by a wide-ranging remit held within what many of the delegates felt to be a very welcoming and friendly atmosphere.