Home » Reviews » Book Reviews » Review of Historians on Hamilton: How a Blockbuster Musical is Restaging America’s Past, edited by Renee C. Romano and Claire Bond Potter

Review of Historians on Hamilton: How a Blockbuster Musical is Restaging America’s Past, edited by Renee C. Romano and Claire Bond Potter 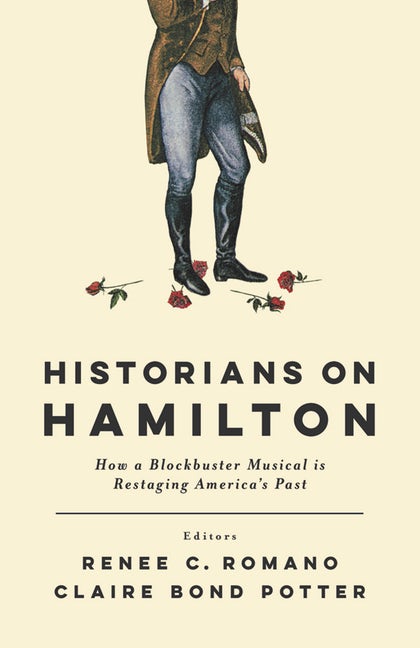 This collection of fifteen essays brings together a range of specialist academic perspectives on the remarkable cultural phenomenon that is Hamilton: an American Musical. It will be of interest to a wide range of people: fans of the show; professional scholars from a range of disciplines; and the general reader. It is an essential library purchase for anyone considering teaching courses which include this musical.

The collection is divided into three sections – on the script, the stage and the audience. In the first two parts there is a nice balance between historians of the genre and of the period in which the musical is set. The third section is especially notable for several essays effectively using a personal experience with the musical as a jumping off point for wider exploration.

The first two sections are underpinned by two general criticisms of the work: namely that Hamilton is less revolutionary than its public reputation suggests and, where it could be characterised as revolutionary or radical, it is so in ways more problematic than is generally acknowledged. Many of the early American historians, from different perspectives, argue that the musical perpetuates a flawed interpretation of the history of the revolutionary period, one encapsulated in the descriptor “Founders Chic”. This interpretation prioritises the history of elite white men, downplays the deep and long-standing history of racism (as well as the perpetuation of other inequalities) in the United States, taking overall a too-optimistic view of the creation of the American republic. The theatre historians argue that the musical builds on a variety of predecessors and therefore, in a number of key respects, does not offer anything radically new. Indeed, the increased casting of African Americans and Latinx performers in a wider range of roles (not simply those of enslaved people, for example), as well as the economic and popular success on Broadway of shows with such ensembles and the adoption of musical genres such as hip-hop into the Broadway musical, have set a precedent for Hamilton which has been under-acknowledged. I particularly enjoyed essays which shed light on aspects of the musical’s world about which I knew less – Leslie M. Harris on New York City’s relationship to slavery, Michael O’Malley on the changing representation of American history on the country’s banknotes, Catherine Allgor on the inequality of women during the revolutionary period.

The third section of the book, dealing with the audience, is more varied in tone and approach. It includes Jim Cullen on the experience of teaching the musical in high school, Patricia Herrera on her horror when her “Latina daughter want[s] to be Angelica Schuyler, a slave owner” (261) for Halloween, and Claire Bond Potter on the remarkable relationship between social media, the show’s creators and the audience – an area which does seem to support claims for the musical’s revolutionary qualities. However, I was most struck in this section by the contributions of Joseph M. Adelman and Renee C. Romano both trying, it seemed to me, to draw something positive from the musical’s popularity in contrast to a suspicion of its success discernible in other contributions. Adelman suggests that professional historians seeking (sometimes with difficulty) to reach a wider audience may have something to learn from the approach of Miranda and his collaborators. Romano notes the way the musical has appealed to folks across the political spectrum, and considers that, particularly in the context of the present political moment, there may be a positive dimension to this broad appeal.

Two things might have strengthened this excellent collection further. One is my own personal bugbear. When I saw the musical, and on a number of occasions as I read this book, the point of comparison that came to mind was Sherman Edwards and Peter Stone’s 1969 musical, 1776. This connection is infrequently referred to by the contributors (with the exception of Waldstreicher & Pasley), but 1776 touches on many points raised by this volume and a more extensive parallel consideration of the two would be fruitful. Secondly, a number of these essays make clear that a strong strand of counter argument by conservative academics exists to many of the issues discussed in the volume. It is a missed opportunity not to have included at least one essay from that school. A footnote led me to a blog post by the African-American linguist John McWhorter questioning whether the claimed weaknesses of the musical in relation to slavery are as problematic as some, including contributors to this volume, argue that they are, and I would have been interested to see him explore his position in a full-length essay.[1]

Overall, this is a wide-ranging, accessible and thought-provoking collection. All of the contributions are worth reading, and the volume will be of value to students and scholars in a variety of contexts.

Review of Culture and the Canada-U.S. Border 2014 Conference
BOOK REVIEW: HILLBILLY ELEGY: A MEMOIR OF A FAMILY AND CULTURE IN CRISIS, BY J.D. VANCE
Book Review: Why the Right Went Wrong: Conservatism – From Goldwater to the Tea Party and Beyond by ...
Book Review: Phantoms of a Beleaguered Republic: The Deep State and the Unitary Executive by Stephen...
Book Review: Remaking a Life: How Women Living with HIV/AIDS Confront Inequality by Celeste Watkins-...
Review: BAAS PG Conference 2017 - Post-Truth and American Myths (Day One)
Review of "Created Equal?" IAAS Annual Conference 2014
Panel Review: 'Lineages of Black Activism', BAAS Annual Conference 2021 (Online)

Finn Pollard is currently Acting Head of the School of History & Heritage at the University of Lincoln. His most recent publications were on Elizabeth Monroe as first lady and George Washington's standing in surveys of presidential popularity. He is currently working on P.G. Wodehouse and Anglo-American relations.
View all posts by Finn Pollard →
Tagged  African American History, Black History, C18, Cultural History, Literature, Music, Popular Culture, Race.
Bookmark the permalink.