Review: ‘Mothering Slaves: Motherhood, Childlessness, and the Care of Children from Slavery to Emancipation’

‘Mothering Slaves: Motherhood, Childlessness, and the Care of Children from Slavery to Emancipation’, University of Reading, 19-21 April 2016.

Following events at the University of Newcastle and the Universidade de São Paulo, this third meeting of the Mothering Slaves Research Network sought to bring together experienced and new researchers, from a wide range of disciplines and several continents with a shared focus on the intersections of trans-Atlantic slavery and motherhood. The Atlantic framework encouraged scholars to think more comparatively about the concept and practice of motherhood within enslavement. The three-day conference adopted a fresh outlook to topics such as abortion, childcare, childhood, childlessness, infanticide, rape, and reproduction, to name but a few. Over the three-day period, scholars came together to share research into the lives of women, mothers, and children from across the Americas. 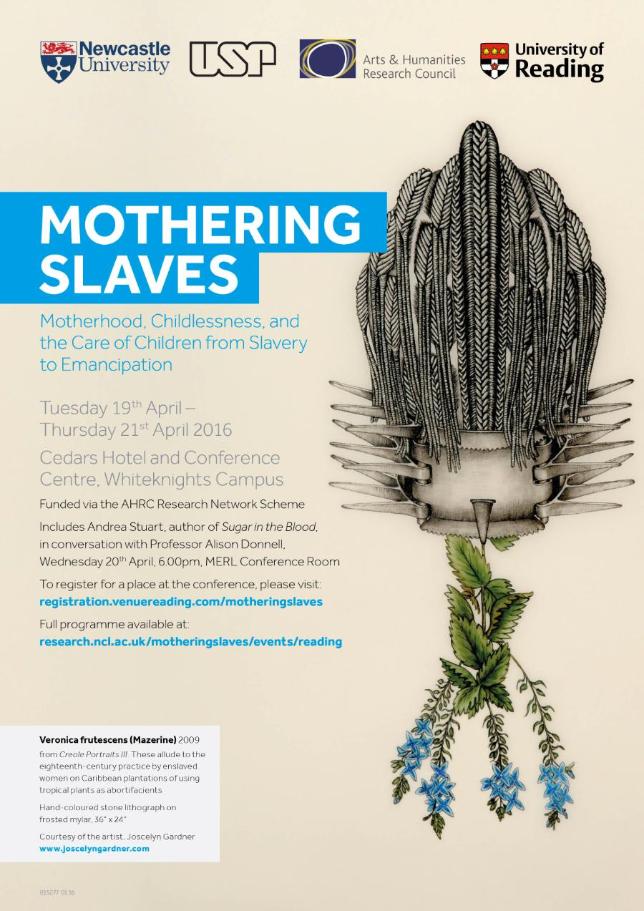 While the great majority of papers looked to North America, predominantly the antebellum South, there was an impressive representation of Brazilian coverage and several insightful papers that looked to the Caribbean slave islands. Such a comparative approach enabled scholars, focussing on different geographical and temporal scales, to share interesting suggestions and findings from their respective areas of research. The papers presented did not only speak to one another within panels, but also across panels. One theme that repeatedly came to light and generated lively discussion was the lexicon employed within nineteenth-century slave societies. Specific examples included Stephanie Jones-Rogers’ (University of California, Berkeley) presentation ‘Black Milk’ that looked at U.S. newspaper advertisements; highlighting how contemporaries employed a specific vocabulary when describing enslaved black wet nurses and the manner in which these contributed to the objectification and commodification of slave women’s bodies and emotions. Thus, we learned how one prospective employer searched for a wet nurse who would “if possible be free from the sulk” (City Gazette & Daily Advertiser, June 16, 1792), demonstrating how these women’s emotions were subordinated to their role as commodity: an object that was denied human emotions, in this example melancholy. Similarly, discussions of enslaved children in the antebellum South illustrated how white society described young blacks as akin to animals or agricultural stock. These labels and classifications of enslaved women and children further contributed to the discursive creation of difference between enslaved and free across the slaveholding Americas.

The selection of presented papers sheds light on the variety of sources with which scholars of trans-Atlantic slavery work and their respective limitations. For instance, many of the Brazilian papers demonstrated scholars’ tireless efforts to work through quantitative archival records, such as baptismal, marriage, and death certificates in addition to slave owners’ probate records. In contrast, scholars of North American slavery spoke of their experiences with the wealth of qualitative sources, the Works Progress Administration interviews and the slave autobiographies being the two principal sources here. Employment of a refreshing visual bank of sources came from Kimberley Wallace-Sanders’ presentation on ‘Slavery and Other Mothers,’ which centred on the visual representations of enslaved black nannies and white children in the nineteenth century. Her assiduous trawling through the archives of the former antebellum South, to procure a vast database of photographs, will surely act as an inspiration for fellow scholars to turn to visual imagery for their personal research. These methodological differences rendered visible areas which have been, thus far, largely overlooked in terms of scholarly attention, and were the source of much animated discussion. This often spilled over into the refreshment breaks and reflected the relevance and timeliness of the conference. 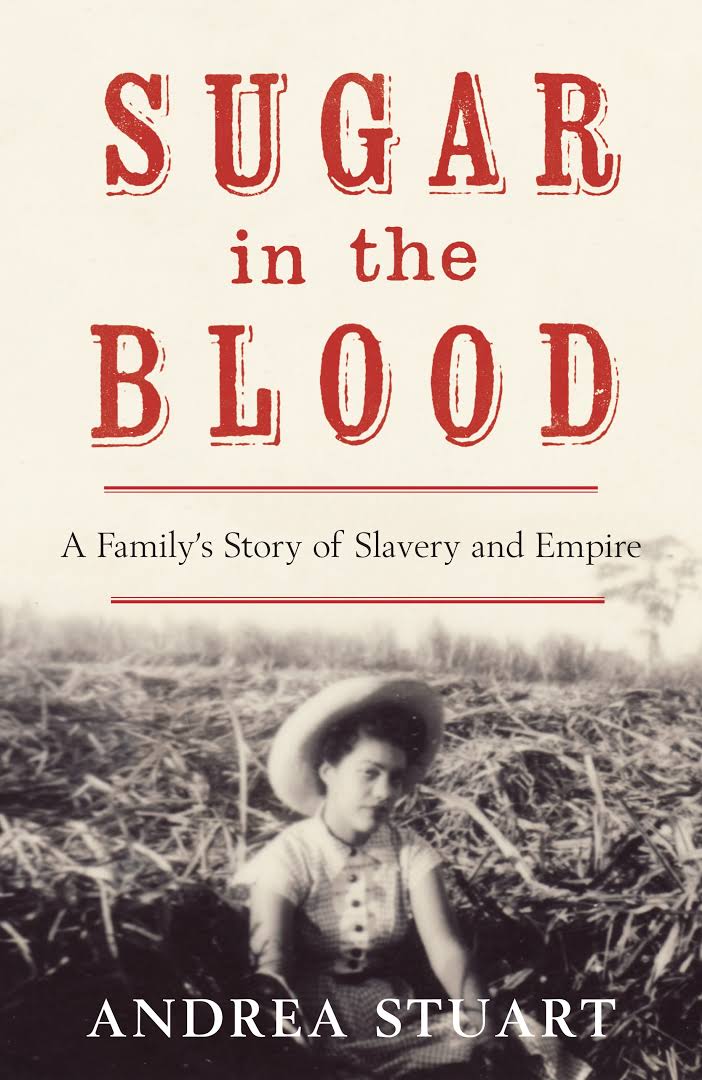 An interview between Professor Alison Donnell, from the University of Reading’s School of Languages and Literature, and author Andrea Stuart was, for many, the highlight of the conference. Following a wine reception, this unusual keynote session enabled participants to converse with the wider public, as many members from the Reading Group of Friends of Barbados were also in attendance. Indeed, Reading is referred to as ‘Little Barbados’ due to the town’s strong Barbadian presence. Born in Jamaica of Barbadian parents, with ancestral roots from both Africa and Europe that came together through the trans-Atlantic slave trade, Stuart was a fitting choice for keynote speaker. She embodies the cosmopolitanism that came to be through the transformation of the Atlantic world – the result of the forced migration of thousands of enslaved Africans to the Americas. Stuart discussed her book Sugar in the Blood (2012), based on the stories of her ancestors, and its beginnings in her discovery of a relative’s account records, marking him as a slaveholder. She also spoke of how an interest in studying the lives of the subaltern motivated her research. This was perhaps where Stuart’s lack of academic training as a historian was most apparent: she remarked how ‘History’s built around the history of great people. Nobody collects the stories of everyday people.’ This statement was certainly true before the mid-twentieth century, but failed to acknowledge the great progress that scholars have striven to make in this respect, in particular concerning social history.

Perhaps the point to underline here is to extent to which the ‘everyday histories’ of everyday peoples still fail to reach the general public. Consequently, Stuart’s comments highlight the importance of ensuring that academic scholarship reaches public knowledge. In speaking of her book and her personal experiences, Stuart skilfully captured the complex webs of racial relations across Europe and the Americas. Most striking were her recollections of personal experiences living as a black Caribbean migrant in England. Initially Stuart felt very isolated when she moved with her family to England, a sensation that was exacerbated through being the only blacks in their community. She spoke of how researching and writing her family’s story enabled her to view her time in England in an unexpectedly positive light. For Stuart, the book showed her all for which ‘blacks worked and bled and died for’ to make ‘Britain great.’ Perhaps most touching was how this experience ultimately culminated in Stuart feeling ‘so proud to be black and to be Caribbean’, yet beginning to refer to herself as being British, something that she had been unable to do prior to this watershed moment.

To conclude, the final instalment of this three-part symposium illuminated several key concepts. First, the discussions highlighted the complexity of mothering and motherhood from across the slave societies of the Americas. Second, we see with greater lucidity how motherhood as an identity and a practice was vital to the institution of slavery. Third, while motherhood among the enslaved was often a site of trauma it could also be, and indeed was, a space of joy. Like freed women, enslaved women sought to fulfil their maternal instincts, to protect and care for their children, and to take pleasure in watching their infants grow and develop. Given the great success of this symposium, one very much hopes that there will be a follow-up project. One possibility for a future event that came out of the conference is that of enslaved children, particularly in the engaging panel entitled “Children in Slavery and Freedom” speaks to this notion. This would be a fascinating and logical next step and could encourage scholars of slavery to look in greater detail at the child experiences of slaves across the Atlantic world. Two leading academic journals – Slavery & Abolition and Women’s History Review – have granted special editions to the Mothering Slaves Research Network and will publish a selection of papers from the three conferences. Both publications are expected to provide some of the most ground-breaking comparative scholarship on motherhood and slavery to date.

Trump and the Republican Party—Precessors and Limits
“I’d Rather Vote for a Tuna Fish Sandwich”: Never Trumpers and the 2020 Presidential Election
Panel Review BAAS 2022: 'Rethinking Identity and Place in the South: Cultural Production and Communi...
Book Review: A War for the Soul of America: A History of the Culture Wars by Andrew Hartman
Review: BrANCA Reading Group: "Hope/Pessimism"
William Faulkner by Kirk Curnutt
Political Identity in the Crossroads of America: Swing States, Campaign Presence, and Presidential O...
American Studies in Europe: Interview with Angela Santese, University of Bologna

Rachael Pasierowska is a PhD student at Rice University (USA) and has just completed a year at the Universidade Estadual de Campinas (Brazil), as part of the dual doctoral degree programme. She is currently conducting dissertation research in Rio de Janeiro. Her research focuses on the relations between slaves and animals in the Atlantic world, with a focus on the nineteenth-century slave societies of Brazil, Cuba, and the U.S. South.
View all posts by Rachael Pasierowska →
Tagged  Andrea Stuart, Childlessness, Emancipation, Gender, Motherhood, Mothering Slaves Research Network, Race, Slavery, Transatlantic.
Bookmark the permalink.