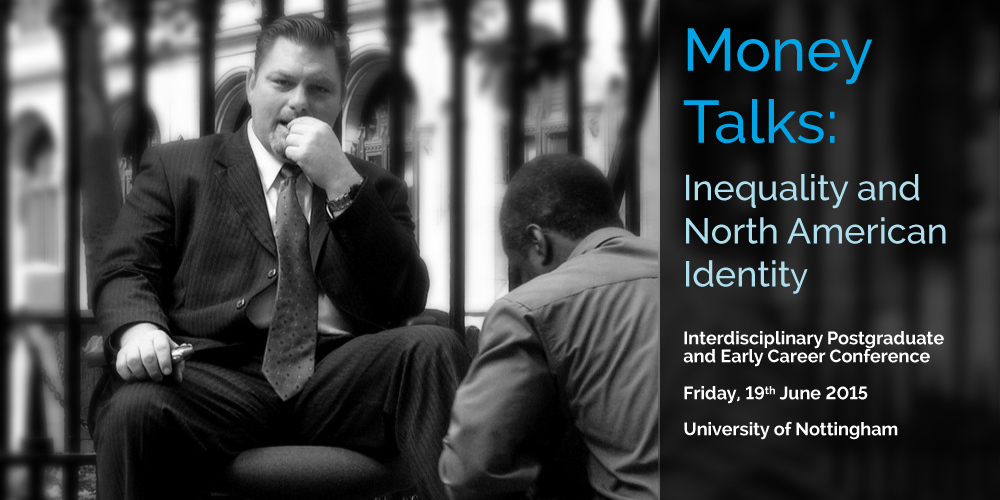 The 2008 ‘Great Recession’ forged a rift in the North American economic identity so deep that its effects are still being felt and divulged seven years on. The disparity between the supremely rich and the devastatingly destitute is familiar in the minds of American Studies scholars. It returns to form with every economic cycle, and is, in Obama’s U.S., far more publicized and seemingly extreme than before. The logical academic conclusion is that if this rift is as ground-breaking and ubiquitous as it appears, it must have an examinable effect on identity construction, artistic output, and social relations between those at opposite ends of the U.S. economic spectrum. Examining this conclusion was the focus point of ‘Money Talks: Inequality and North American Identity’, a conference organised by the 49th Parallel in joint collaboration with the University of Nottingham and the University of Birmingham.

Alice Lilly (Nottingham) and Peter Bent (Oxford/Massachusetts) discussed legislative prioritising of business interests over the worker during 1990s prosperity and 1890s hardship. Also considered was the construction of ‘the poor’ as a definable identity that could be contained by governmental economic policies. This theme resurfaced in a later panel on ‘Drugs and Money’, which focused on the construction and reconstruction of identity by those experiencing an economic imbalance, rather than the governing institutions. Marta Gara (Roma Tre) and Ellis Jones (Leeds) discussed the economic status of poor white heroin addicts and ‘coke rappers’ respectively. They illuminated how this status has been interpreted and projected by these groups as a major contributing factor to the construction of their public identities. Gara discussed recession and depression as fuelling and maintaining the perception of white heroin addicts as an ‘addicted community’ in the 1970s. This linked damage to the physical body with the decreased wellbeing of the economic body. The correlation was also prominent in Dr Victoria Carroll’s (Kings College London) paper, which discussed the use of the physical body as a symbol of community damaged by both AIDs and the drug AZT in the satirical cartoons of AIDs activists in the late 1990s. The damaged body in this context was discussed as a cash cow through which its economic counterpart – both providers of AIDs drugs and those legislating their use amongst marginalized communities – experienced a boost at the expense of those physically suffering. 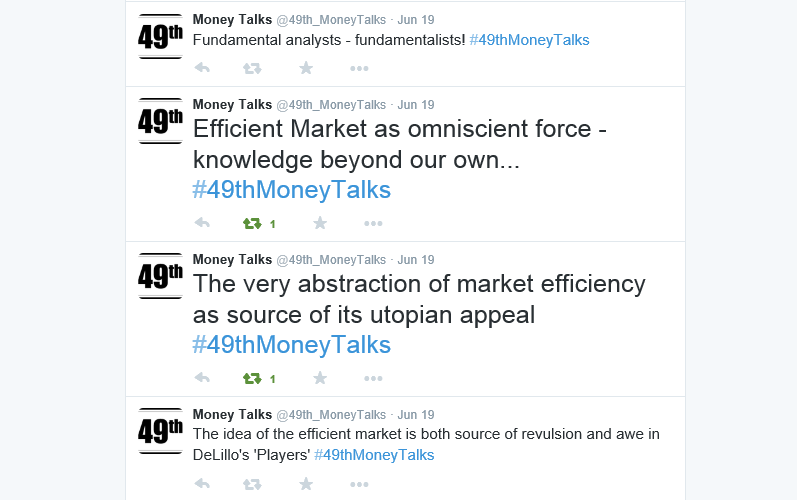 Conference organisers were live-tweeting throughout the event; see @49th_MoneyTalks and #49thMoneyTalks for their view on the day.

These readings of money’s effect on the individual were contrasted throughout the day by a number of papers examining the effects of finance on U.S. culture and identity. None more so than Dr Paul Crosthwaite’s (Edinburgh) keynote address, which discussed a duality of ‘awe and revulsion’ in contemporary financial rhetoric. One that culminates in an interpretation of ‘the market’ as a simultaneously God-like and monstrous force, an idea fed by the Efficient Market Hypothesis (EMH). The EMH claims that every piece of information that may contribute to a change in commodity price has in fact already been accounted for by the seemingly all-knowing and omnipotent market; in short, ‘the price is always right’. Crosthwaite’s discussed the belief in this hypothesis as a fantastical compensation for the individual’s lack of autonomy within the market, and later as a capitalist-utopian ideal. This was situated against readings of Don DeLillo’s Players (1977) and Tom Pynchon’s Bleeding Edge (2013) as explorations of the market’s power in comparison with the individual’s.

Crosthwaite’s analysis echoed a number of earlier papers that dealt with figurative representations and effects of money and finance on personal enfranchisement. In particular, Timo Schrader’s (Nottingham) paper on activism in the Puerto Rican community of Lower East Side New York in the 1960s. He examined how these activists fought for equal social funding for the construction and maintenance of the residential, recreational, and educational buildings within the community. This equal funding was interpreted as economic agency and thus equivalent to a tangible self-identity for Puerto Rican New Yorkers. Christine Okoth (Kings College London) and Pat Massey (Manchester) also discussed how economic status validates identity. Okoth did so by exploring the need for monetary empowerment to exercise elevated social status in Teju Cole’s Open City, and Massey questioned the authenticity of the title character in Dave Eggers’ Zeitoun. Whom, in the literary version, is dependent on an entrepreneurial spirit for his ‘heroism’. 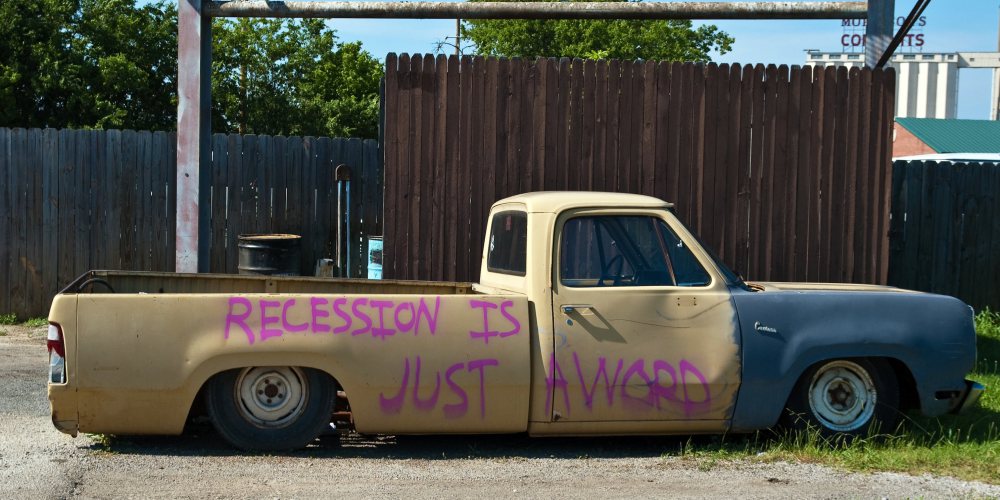 Papers also discussed figurative formations of ‘money’, and how these are represented through literature and film.

The question of heroes – or lack thereof – in literary depictions of money was raised in the panel on ‘Postmodern Capitalism’. Its conclusion centred on the incorporation of money into the construction of identity, which results in an unnatural or extrasensory extension. This offered a balance to Schrader, Okoth, and Massey’s papers on the lack of money as equating to a lack of personal subjectivity. Julia Nikiel’s (Maria Curie-Sklodowska) reading of William Gibson’s Hubertus Bigend as ‘an entity rather than an individual’ was mirrored in Crosthwaite’s reading of the market as a force rather than a system. This was encapsulated by David Hancock’s (Kingston) paper on the formulation of the frontiersman myth in the attempted construction of capitalist heroism in American cinema. It frequently results in the immortalization of characters over and above their evidenced moral capital. The creation of fictionalized versions of these already fictional beings spoke to my own paper on the existential panic felt by Patrick Bateman of Bret Easton Ellis’s American Psycho. Bateman’s experience of financial hysteria and his subsequent creation of an alternate persona was read against the excess and abstraction of his economic environment. This is a factor that all panellists agreed contributed to the inflation of both literary figures and the market beyond the confines of physical realities.

As a whole, ‘Money Talks’ succinctly explored the conceptualization and effect of money within U.S. culture. One opening remark declared that the idea for the event was born from a ‘shared ignorance as well as a shared interest’ surrounding money, and therefore a desire to discover more about the topic within American studies. The lack of discussion regarding Mexican or Canadian economic formulations in the listed papers suggests that, even amongst financial scholars, this ignorance is yet to be met with a cohesive inquiry into all fractions of North American culture. That said, the papers demonstrated an acute understanding of industry-level perceptions of economics and how these transpose onto those effected by them. ‘Money Talks’ presented an open platform on which to explore financial, historical, social, and cultural formations of money in equal value and measure.

49th Parallel will be producing an upcoming issue based on the themes of the conference. The CFP can be found here: http://49thparalleljournal.org/submissions/call-for-submissions/

Sea Birds, Castaways, and Phantom Islands off Newfoundland
My Research: Juliet Williams
The Cold War and the Origins of US Democracy Promotion
Queer Clout – Chicago and the Rise of Gay Politics by Timothy Stewart-Winter
Reconstructing the American Gothic in The Chilling Adventures of Sabrina
An Epidemic of Presidential Ignorance: The AIDS Crisis and the US Presidency
The NED in Action: US Democracy Promotion in Chile and Nicaragua, 1988 – 1989
The Lady Vanishes: American Women Writers and the Noir Canon

Amy Bride completed her PhD in American Studies at the University of Manchester in 2019. Her thesis examined the intersection of race and finance in American gothic monster fiction of the twentieth and twenty-first centuries. Her recent publications include articles on Late-Capitalist Hyper-Gothic in the work of Bret Easton Ellis and archival research on the corpse-values of African American slaves. Her other research interests include technogothic, gothic transhumanisms, and financialized body parts.
View all posts by Amy Bride →
Tagged  American Working Class, C21, Finance, Politics, Popular Culture, Visual Culture.
Bookmark the permalink.