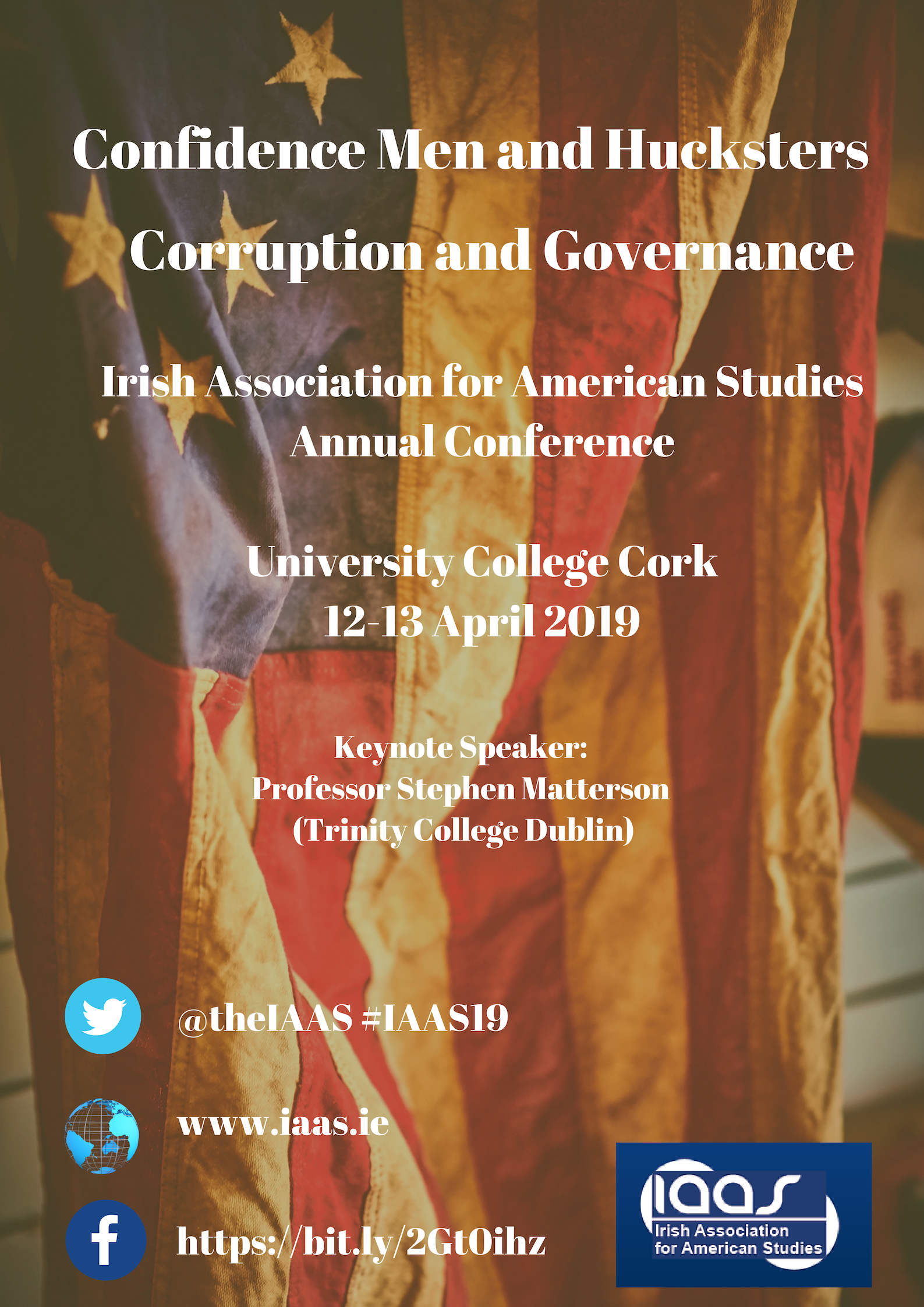 Interested in the parallels between Donald Trump’s presidency and the 2004 novel The Plot Against America, in January 2017, The New Yorker (https://www.newyorker.com/magazine/2017/01/30/philip-roth-e-mails-on-trump) contacted acclaimed Jewish-American novelist Philip Roth for comment. His response? Donald Trump is ‘just a con artist.’ For Roth, Trump is more aptly captured in Herman Melville’s The Confidence Man, a novel which  ‘could just as well have been called ‘The Art of the Scam.’ Indeed, it is this meeting of fact and fiction described here by Roth – recent political developments along with Melville’s complex and remarkably prophetic 1857 novel – that motivate the theme of this year’s Irish Association for American Studies Annual Conference, held in University College Cork, Ireland from the 12th-13th April, 2019.

Roth’s remarks were recalled by Professor Stephen Matterson (Trinity College Dublin) during his keynote paper for the Alan Graham Memorial Lecture. As Matterson informed us, the confidence man is a term Melville borrows from the New York Herald’s 1849 report on scam artist William Thompson. Thompson would approach unknowing victims, convince them that they were in fact acquaintances, and appeal to their confidence that he could be entrusted with the care of their (subsequently stolen) watches. Why were these affluent strangers particularly susceptible to Thompson’s deception? Matterson insightfully noted that trust demands reciprocation: ‘I feel I know this man,’ ‘and to say I know him, means I must reciprocate.’ 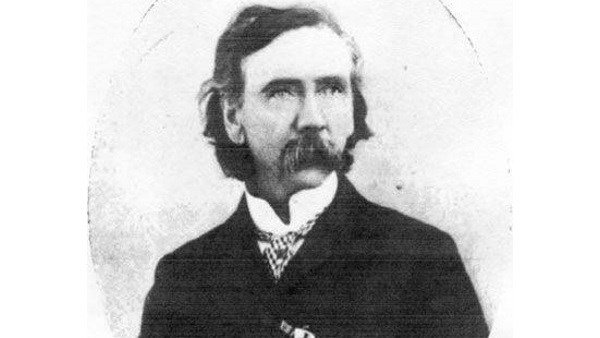 The making of the confidence man is thus the building of what Matterson termed a relational identity: the ability to build a relation based on observation and improvisation. Such an identity, he argued, embodies core American values, and can be traced throughout the American literary tradition, from Jay Gatz of  F. Scott Fitzgerald’s The Great Gatsby to Patrick Bateman of Bret Easton Ellis’s American Psycho. This evolving sense of identity was a thematic recurrence throughout the conference; according to Michael Patrick Cullinane (University of Roehampton), Hamilton has changed the way we think about one of the founding fathers. This development kick-started Cullinane’s paper on theatrical depictions of the twenty-sixth U.S. president, Theodore Roosevelt, leading him to conclude that theatrical adaptations have evolved from monolithic expressions of Statespeople to those who, as Walt Whitman would have it, contain multitudes. 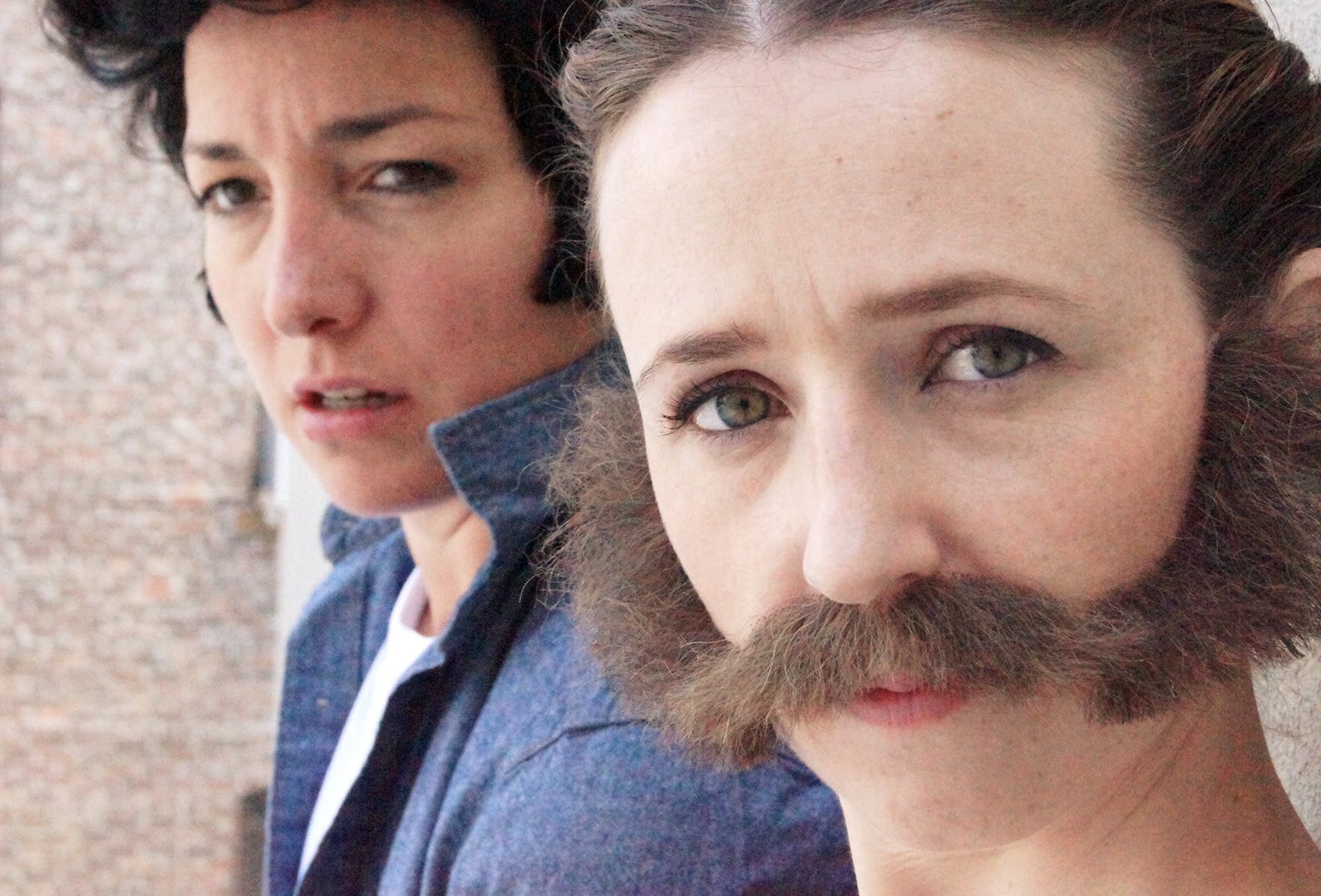 This malleable identity extends to the figure of ‘the author as confidence man.’ Professor Matterson noted that, for Melville, each novel is an opportunity for self-reinvention; similarly, James Hussey (Trinity College Dublin) discussed the regenerative quality of Thomas Pynchon’s work.  Hussey argued that the authorial impetus for Pynchon’s short story ‘Entropy’ is the author’s ignorance on the subject. Pynchon emerges, therefore, as the cartographer of his own intellect, with his novels and short stories working to shore up these gaps in his knowledge. Gillian Moore (University of Cambridge) also offered a compelling examination of the author and of self-help in contemporary women’s writing. For Moore, Sheila Heti’s Motherhood is a performative thought experiment that questions the extent to which artistry can be separated from self-absorption, work from play, and triviality from importance. The effective management of time, which Heti has spoken about in relation to David Covey’s 1989 bestseller The Seven Habits Of Highly Effective People, promotes a North American self-reliance that is perpetuated by the precarious gig economy, and which is questioned in Heti’s novel with its redemptive focus on wasteful, banal time. Motherhood, despite its misleading title and the focus on maternal issues from its critics, emerges as a novel primarily concerned with the temporal choices of women writers, how these are negotiated between work and leisure, and how that navigation leaves room for what Moore calls ‘accidental inspiration.’ The act of writing itself, therefore, may be understood as a metamorphic process, prone to expansion and transformation.

To return to the keynote paper, which cogently tied together several of the conference’s discursive strands, we may ask, what lies behind the mask of the confidence man? Matterson answered that identity is a series of performances behind which there may be no concrete actuality. This inability to uncover the truth was explored in Dara Downey’s (University College Dublin) paper, ‘Lies, Disguises and Hypnotisers in Margaret Atwood’s Alias Grace.’ Discussing this work of historical fiction, Downey addressed the construction of the eponymous Grace, an Irish-American servant and suspected accomplice to murder. Irishness is, for Grace, a masquerade, with its advantageous connotations of purity and innocence (as per the Rose of Tralee contest, about which there was an engaging discussion). Claiming that the newspapers know more about her than she knows about herself, Grace is reminiscent of Henry James’s Daisy Miller, the tragic subject of his 1879 novella, whose every move is desperately studied by Frederick Winterbourne. Atwood’s Grace similarly invites obsessive speculation, despite the absence of any concrete evidence.

The potential nothingness underlying artifice was further considered by Sean Travers (University College Cork), who began by tracing the connections between postmodernism, with its scepticism towards metanarratives such as history or religion, and nihilism. In a search for meaning, the traditional archetype of the psychopath, a confidence man who is meticulous in planning action, is replaced by the postmodern psychopath, embodied in figures like The Dark Knight’s Joker, who ‘just [does] things.’ These existentially potent types are instead motivated by pure curiosity. So too, Travers argued, are consumers of metafictional videogames, who are critiqued for their morally questionable actions in playing and replaying Toby Fox’s Undertale. 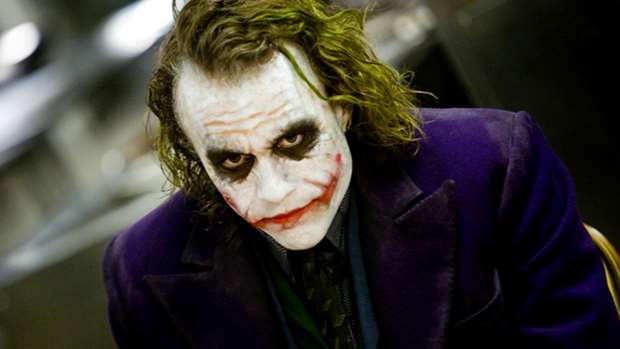 The Joker, played by Heath Ledger in The Dark Knight (2008), is a ‘postmodern psychopath’

As David Coughlan (University of Limerick), pointed out following a session entitled ‘Listening to the Huckster: Faith and Advice,’ the fantasy constructed or implied in the figure of the huckster, or indeed, in the opportunistic ideology of American national identity more broadly, inevitably leads to costly realities. The darker implications of the confidence man were teased out expertly by, amongst others, Anna-Grace Scullion (University of East Anglia). Examining Ojibwe writer Louise Erdrich’s 2001 novel Four Souls, and using William Faulkner’s Thomas Sutpen as a comparative point of analysis, Scullion illuminated how the confidence man is a product of settler colonial corruption. The archetypal confidence man, which encompasses a marketable, fabricated identity, is more easily attained in the less fixed social hierarchy of the U.S. South, but Erdrich belies this image of the wealthy European Settler.

Alex McDonnell (Durham University), former winner of the Adam Matthew Digital Essay Prize, also discussed identity in relation to colonialism, focusing on The Confidence Man. The American psyche compartmentalises national expansion: just as the confidence man’s various disguises are illusions, so too is the State’s status as a noble institution. As Melville’s Indian-hating section makes clear for McDonnell, this perception of the nation as exceptional can only be another masquerade, given the bloodshed that it is founded upon. Like Scullion, McDonnell related the opportunism of the confidence man to the social mobility of industrial expansion, but he also extrapolated the parallels here with the projected self in a late-capitalist present. This is a cultural moment that Donald Trump has certainly capitalised on, particularly given how he marketed himself as a figure of authenticity in opposition to presidential candidate Hillary Clinton.

Despite a considerable number of papers on The Confidence Man itself, the conference revealed an ambitious scope in the texts and methodological approaches that unfolded over the course of two days. From canonical texts that catalysed the very study of the Americas, to postmodern video games, comics, and theatrical adaptations, the quintessentially American figure of the confidence man lives on, and does so dangerously in the form of Donald Trump. America – famously known as the Land of Opportunity – might be more accurately categorised, based on the conference’s findings, as the House of Mirrors.

Sarah McCreedy is a third-year PhD candidate at University College Cork, supervised by Dr. Alan Gibbs. Her thesis, which explores the resurgence of American literary naturalism in 21st-century American fiction as a response to neoliberalism, is funded by the Government of Ireland Postgraduate Scholarship. She is also a postgraduate representative for the Irish Association for American Studies.
View all posts by Sarah McCreedy →
Tagged  History, Literature, Politics, Presidents.
Bookmark the permalink.