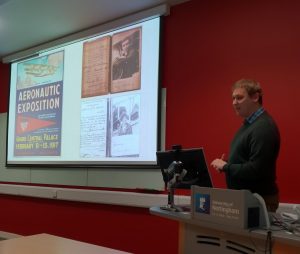 Dr Alex Bryne presenting his research on Pan-Americanism and aviation.

At the inaugural HOTCUS work-in-progress meeting, two developing journal articles were discussed: Dr Miguel Hernandez’s (University of Exeter) paper, ‘”The Menace of Modern Immigration”: Nativism and Violence in the 1920s Ku Klux Klan’ and Dr Alex Bryne’s (University of Nottingham) ‘The Potential of Flight: Pan-Americanism and U.S. Aviation during the Progressive Era’.  As is typical of such sessions, the papers were circulated in advance, and briefly introduced by the authors.  The chair of the meeting, Mark Eastwood (University of Nottingham), explained that the impetus for trialling work-in-progress sessions came from HOTCUS members: ‘in particular those at an early career stage, who wanted a forum for sharing and developing their ideas and research beyond the confines of a conference paper.’

An advantage of this format, for the audience, was the chance to hear more about the inspiration and development of the research.  Bryne explained how his article had developed from the fortuitous discovery of a telegram about Pan-Americanism and aviation in the Library of Congress.  Affection for the subject matter, the early aviators whose planes were like “bicycles with wings”, was palpable in his introduction. Furthermore, the format allowed for more in-depth consideration of methodological challenges in research than is common in a conference presentation with Q&A.  For instance, Hernandez’s paper sparked an interesting discussion of the issues involved in identifying and evaluating archival source material for the Ku Klux Klan, especially given the secrecy surrounding much of its membership and activities.   Hernandez explained some of the strategies he plans to deploy to address this gap, for example using Spanish-language sources to trace Mexican-Americans’ interactions with, and reactions to, the Klan. 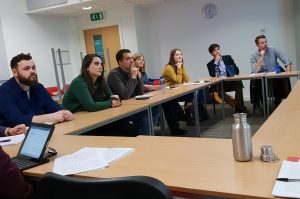 It was illuminating to see ‘behind the scenes’ of academics’ research and writing processes. Seeing these processes first-hand takes away some of the mystique, and the intimidation, of writing for publication. The discussion also raised wider questions, pertinent to any piece of academic writing, including the most basic yet unanswerable: how can you tell when it’s ready to submit?  While both articles were beautifully written and had already gone through several drafts, I was struck by how malleable the material remained, as the discussion ranged over the broader themes, ideas and arguments.  For example, Hernandez asked the group for advice on what to cut back, as various threads were jostling for space.  It was generally agreed that his submission might work better as two articles rather than one, or indeed as the beginning of a larger project.  Hernandez argued persuasively for the importance of researching the KKK in the 1920s on a broad national scale, rather than as local studies.  Yet there was also a rich thread in his article relating to a case study of the KKK and Mexican immigrants, which had potential as a separate paper. 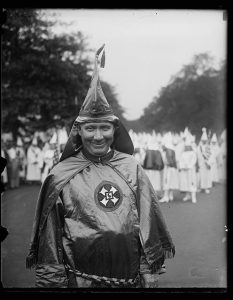 The overall discussion suggested a tension, or need for balance, between the attractions of making a bolder claim for the significance of one’s research, and the rigours and nuances of more micro-level work, especially within the confines of an article.  Bryne’s paper used aviation history as a lens to re-examine Pan-Americanism and U.S.-Latin American relations in the Progressive Era.  He asserted the subtleties of this: that while arguing that aviation associations in this era embodied genuine attempts at cooperation, he was not attempting to overturn the historiography of pan-Americanism as fundamentally dominating and imperialist.  As was to be expected, the tone of the work-in-progress discussion throughout was collegial and constructive.  A commendable feature of this was the way that the chair encouraged the writers to ask advice of the group, rather than the flow of questioning being all one way.

The value of the work-in-progress format for those presenting was summed up cogently by Bryne: ‘WIPs provide a great opportunity to test the clarity and validity of arguments and readers are excellent at spotting potential avenues of further research or other issues that your research might be able to engage with. These sessions allow you to discuss the intricacies of your research in more intimate ways that are often impossible to replicate in formal conference paper presentations.  A good way to view a WIP session is to consider it as a quasi-peer-review process.  Although I am fortunate enough to have colleagues who will always be happy to read my work, WIP sessions offer a way to widen the scope of this kind of academic support, which is essential for early career researchers.’  Concurring with this, Hernandez added that the work-in-progress session was ‘an excellent opportunity to help develop my perspectives on how to structure, re-conceptualize and rein in my work for greater effect.  The audience was friendly and varied, which provided an open and inviting forum where participants with different expertise provided constructive feedback.’

The work-in-progress meeting was also judged a success by the HOTCUS committee who plan to arrange future sessions. The postgraduate secretary Mark Eastwood, who chaired the session, noted afterwards:  ‘We were particularly pleased with the mix of senior academics and postgraduates in attendance who all contributed excellent ideas and suggestions for both papers whilst also being able to offer more concrete advice about the future development of the wider projects and publication routes for the papers. A special thanks to Alex and Miguel for volunteering to be the first presenters at these sessions. We hope the success of the evening will encourage more colleagues, from any career stage, to apply to present their work at future meetings.’