“What did slavery mean in the life, ancestry, environment, imagination, and career of William Faulkner?” This was the guiding question posed by the Call for Papers of this year’s annual Faulkner and Yoknapatawpha Conference, centered on the theme “Faulkner and Slavery,” and held at the University of Mississippi. As more work is undertaken across the globe to re-contextualize historical monuments, and to recover subjugated narratives, critical re-evaluations of the past are central to current scholarship; the time to critically re-assess Faulkner’s relationship to slavery is now. 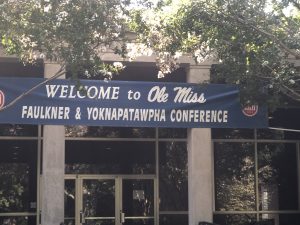 While on the surface, Faulkner’s own interaction with “the peculiar institution” might appear somewhat secondhand – the author was born in 1897, thirty-two years after the Emancipation Proclamation – the specter of slavery was never far from his life. Through his African American “Mammy”, Caroline Barr (born an enslaved person somewhere around 1840), slavery was always in close proximity to Faulkner, who believed that the ripples it created left a lasting impression. As the conference made clear, Faulkner grappled with the legacy of this subjugation, using the trope of slavery to reflect on the contemporaneous racial issues he saw around him, such as the desegregation of schools and other public locations, and the burgeoning seeds of the Civil Rights movement (Faulkner died in 1962).

Dr. Ed Baptist (Cornell University), author of The Half Has Never Been Told: Slavery and the Making of American Capitalism, gave the first keynote of the conference, providing attendees with great historical overview of the slave trade, and the forgotten voices of subjugated labor. Baptist’s talk laid terrific groundwork for Dr. John Matthews’ subsequent keynote the following day, which examined  how slave capitalism functioned, and is expressed, in Faulkner’s work specifically. Dr. Tim Armstrong’s (Royal Holloway) evocatively titled paper “Playing Monopoly with Mr. Faulkner,” discussed shape in texts such as Go Down, Moses, Intruder in the Dust, and Faulkner’s last (and comparatively less discussed) work The Reivers, playing with the all-too-familiar image of a Monopoly board to guide a discussion about the square plots of land in Faulkner, and their inescapable capitalist motives. Lastly, Dr. Stephen Best (University of California, Berkeley) guided us through a talk very much on the pop-culture pulse.He examined the recent Marvel film Black Panther and discussed the racial limitations he sees expressed in the symbolism of Wakanda and  more contemporaneous portrayals of African American experiences. 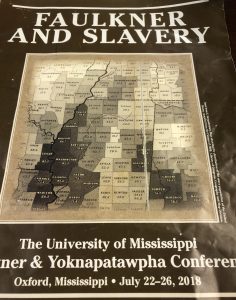 Two days at the Faulkner Conference began with “Teaching Faulkner” sessions, designed to help educators and students alike, while daily lunchtime lectures provided a more casual way to participate in scholarship. As part of the first lunchtime lecture, Seth Berner, a rare bookseller, and frequent attendee of the conference, discussed the joys of collecting Faulkner first editions, mass market paperback runs, and printer error copies of Faulkner’s fiction, while his impressive stash of Faulkner collectibles was available to peruse and even purchase in the book room for the event.  On Tuesday, the Digital Yoknapatawpha project presented an annual update on their work. This web domain – run largely from the University of Virginia but also subsistent on contributions from outside individuals – is a fantastic multimedia space, demonstrating that Faulkner studies continues to maintain relevance as scholarship moves increasingly toward digital humanities and electronic forms of learning. Guiding listeners through the many functionalities of the site, the project coordinators (Jennie Joiner, Erin Penner, and Stephen Railton) cleverly tied the digital mapping of Faulkner’s works to a central thread running through the conference; thinking through notions of mapping, territory, and ownership as they relate to ideas about enslavement and the enslaved.

Finally, the library lecture held on campus on Wednesday was offered by Richard Cellini. He is a founding member of the Georgetown Memory project, an endeavor that seeks to unearth the lives and legacies of a group now dubbed the “Georgetown 272” – named so after 272 enslaved individuals who feature on a bill of sale from Georgetown to a plantation in Louisiana – as well as other slaves who stayed behind in Washington D.C. to build the Jesuit institution. The Memory Project serves not only to excavate the histories of these individuals, who have otherwise been forgotten, but also to reunite descendants, creating living stories for them, and providing a kind of reparation – a subject at the forefront of discussions among institutions and companies who benefited from the subjugation and labor of slaves in the past. 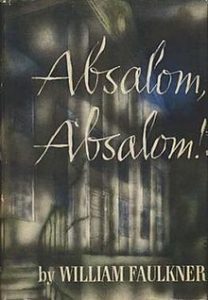 Most discussed of all Faulkner’s texts was Absalom, Absalom, though other prominently featured works were The Sound and the Fury, Light in August, and Go Down, Moses. Particularly fascinating was the discussion by Dr. Amy Foley (Bryant University) regarding the windowless and doorless spaces of Faulkner’s slave quarters, and a paper given by a graduate student in Social Work – Amber Zinni (Smith College School for Social Work) – who read the relationship between Quentin Compson and Rosa Coldfield in Absalom through the lens of psychologist/analysand. A talk regarding the African American benefactors listed in Faulkner’s last will and testament given by Drs. Garry Bertholf and Zoran Kuzmanovich (both Davidson College) was also extremely pertinent, as Bertholf shared with us how he had used his time in Oxford, MS to touch base with relatives of the tenants of Faulkner’s Greenfield Farm property, and taken a tour of the otherwise quite disused area, with the aim of incorporating oral histories into his research project.

On Tuesday, the day’s events concluded with a brief cocktail party at the University Depot, a repurposed space perfect for such get-togethers, in what was originally the train station for Oxford, a location that scholars recall from its mention in Faulkner’s 1931 novel Sanctuary. One of the most memorable highlights also has to be the buffet supper at Rowan Oak – Faulkner’s family home – on the first night of the conference. An absolutely spot-on way to kick off proceedings, this meal featured family style catfish, sweet tea, and cobbler in the grounds of Faulkner’s estate. Attendees enjoyed an evocative panel featuring faculty members from the hosting University’s departments of History, Sociology, Anthropology, and Southern Studies. These speakers provided a series of talks about the work they have been doing as part of the University of Mississippi Slavery Research Group, including digging through archives at the University and surrounding areas to re-contextualize the houses and environs in those places as a way of giving voice to a history of slavery otherwise willfully ignored.

A number of talks from the conference will now be published in the accompanying volume to the proceedings, as part of the Faulkner and Yoknapatawpha series out of the University Press of Mississippi, and the excited and intrepid Faulknerians among us look forward both to this publication, and next year’s conference, which takes as its inspiration “Faulkner’s Families.” Commendations should go out to Jay Watson and the rest of the conference committee and Faulkner Society, as well as Mary Leach, Drew Windham, and Griffin Stroupe from University Outreach for bringing the whole thing together. As William Faulkner famously remarked: “The past is never dead. It’s not even past.” By exploring the influence of slavery on the life, ancestry, environment, imagination, and career of William Faulkner, attendees and presenters at this year’s Faulkner and Yoknapatawpha conference gave life to the histories of subjugation and enslavement so often left to the annals of the unknown.

“Be Curious, Not Judgemental.” Influences of Positivity and Kindness in Ted Lasso
Book Review: Masculinity in Contemporary New York Fiction by Peter Ferry
Review: Pursuing the Rooseveltian Century
Counterpublics and the New Dynamics of Contemporary Conservatism: From the Tea Party to the Trump Mo...
Review of the 1st Americas Postgraduate Conference at the UCL Institute of the Americas
‘The speed of every incident is unbelievable’: Writer Muriel Rukeyser and the Spanish Civil War
Veiled Interpretations of Du Bois’s 'The Souls of Black Folk' (1903)
“Atomic Ayatollahs”: The ‘Islamic Bomb’ in 1980s American News Media

Laura Wilson is a fourth year PhD candidate at the University of Mississippi, having moved to the United States from Oxford, England to pursue research in William Faulkner. She presented a paper on Shreve McCannon as narrator in Absalom, Absalom!, at the 2016 Society for the Study of Southern Literature conference in Boston, and the material culture of Booker T. Washington in 2018. This summer, Laura was awarded a BAAS bursary at the inaugural Faulkner in the UK Colloquium, for her presentation on the controlled illegalities of Sanctuary; she also gave a paper on excavating slavery in “The Fire and the Hearth” at the 2018 Faulkner and Yoknapatawpha conference. Laura’s dissertation will examine the transfiguring power of capitalism in twentieth-century Southern literature through the work of William Faulkner, Eudora Welty, Zora Neale Hurston, and other contemporaries.
View all posts by Laura Wilson →
Tagged  African American Culture, C20, Literature, Race, Slavery.
Bookmark the permalink.