The second biennial Ex Re(y) conference, organized by Dr Izabella Kimak and Mgr Julia Nikiel, brought together the Department of American Literature and Culture with the Video Games Center. Its focus was the topics of exhaustion and regeneration in American and Canadian literature and visual cultures, including but not limited to film, visual arts, video games, and television from the year 2000 to the present day. 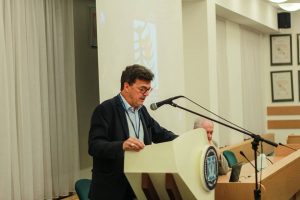 Amfreville built upon the author’s questioning of existence and the ambivalence of the American subject. He framed this questioning in context with a reflection on the language of trauma and redemption, and the personal depression of the author as a literarized feature of the broken heart. He discussed the various meanings of facelessness and mask-wearing as concealing as much as revealing. His exposé of the forms taken by guilt and melancholy in Moody’s work served as the perfect introduction to the conference, which was centered on the mental, physical, moral, and artistic exhaustion of contemporary America.

Climate change, food and energy shortages, and the development of new systems of knowledge were topics at the center of several panels. Dr Michał Łuszczuk (Polish Academy of Sciences in Warsaw) discussed sustainable design in the context of the environmental problems in Alaska today. He drew on the concept of Traditional Ecological Knowledge (TEK) to illustrate how artistic processes are used by Alaskan Native populations to bridge the gap between Native and Euro-American knowledge systems. Dr Tatiana Prorokova (University of Marburg) also examined the dangers of climate change, drawing on Larry Fessenden’s 2006 movie The Last Winter. She presented oil drilling in the Arctic as a pre-apocalyptic horror scenario, in which the ghosts of fossil fuels come to fight resource extraction workers. She associated the industry of oil drilling with a new form of vampirism. Nature, originally an innocent victim, is sired and becomes monstrous. For Prorokova, this new representation of wilderness serves as an example of eco-horror, attempting to explain the history of colonization and exploitation in the United States.

Paula Wieczorek (University of Rzeszów) also discussed climate change as a crisis of both culture and imagination. She used the example of Barbara Kingsolver’s cli-fi (climate fiction) novel Flight Behavior (2012) to discuss environmental injustices in the context of the ‘capitalocene’, a term offered by Jason Moore to define the climate change period of the anthropocene within the frameworks of capitalism and neoliberalism. To Wieczorek, the novel serves to illustrate the invasion and exploitation of natural and cultural processes originally based on local knowledge and sustainability. This fed into discussion of the changing relationship between the human species and the natural world. The prevalence of contemporary human-centered politics, and consequences for American fiction, were key topics of the audience’s comments. While most agreed on the role of science-fiction as an expression of a crisis and as social and political commentary, some questions remained unanswered. Can we really consider the invasion of virtual cyber-space, or Mars, as colonization, if there is no one there to subdue and eradicate? The debates passionately continued in the hallways during coffee breaks. 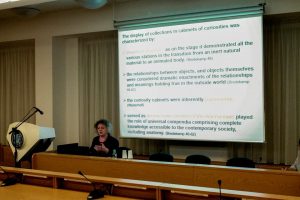 Second keynote speaker Dr Zofia Kolbuszewska (University of Wrocław) discussed the intellectual inquiries and political aesthetics which led to the genre we now know as neo-baroque. According to her, however, we never actually parted with baroque in the first place, and are still living in the curious reality of the Wunderkammer, the cabinet de curiosités. She took the example of the film “Wonderstruck” (Todd Haynes, 2017) to explain neo-baroque premises and contemporary interest in alterities, and explained our desire for awe as a quest to know what it means to be in the world. The aesthetics and strategies of growth, change, proliferation, disruption, and decay resonated in the presentations which followed in the afternoon as well.

Dr Ewa Antoszek (Maria Curie-Skłodowska University) showed paintings and installations from Mexican-American artist Consuelo Jiménez Underwood’s series Borderlines, which explores the seamlessness and inbetweenness of the U.S.-Mexico border. Building on the multiple meanings of la frontera, as a line (not) to be crossed, borderland, or threshold, Antoszek reminded us of the hybridity and instability of human-built borders.

This idea of crossing borders as an act of negotiation between different perspectives aligned well with Gianfranco Languasco (University of Illinois), where his talk on Digital Capitalism explored the exhaustion of human as well as natural resources. He focused on sci-fi movie Sleep Dealer (Alex Rivera, 2006), a post-apocalyptic depiction of the U.S./Mexico border, where identity is hybridised to the extent of a literal physical split of characters’ bodies. Languasco analysed the ecstasy of unlimited growth through the half-human, half-machine protagonist. Hybridised to the extreme, these characters interrogate the new limits between object and subject, between assimilation and representation. 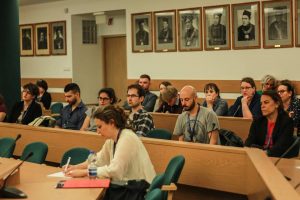 Branching out from more traditional media, Dr Małgorzata Olsza (Adam Mickiewicz University) discussed the tension that binds images in Adrian Tomine’s comic book Killing and Dying (2015). She explained the changes in rhythm, the thinning of the gutters, and the intrusion of formal structure which picked up again at the end as a metaphor for the normalisation and the acceptance of abuse and violence in American society.

Another original topic was chosen by Dr Urszula Niewiadomska-Flis (John Paul II Catholic University). She suggested that ‘Soul Food’ (traditional African American Southern cuisine) was a semiological system capable of carrying the cultural memory of slavery. Recipes and cooking practices transmit the construction and reproduction of personal memories and familial identities throughout generations. Enslaved people depended on very rich one-pot meals and leftovers. As such, traditional soul food is typically very rich and these recipes often contribute to lowering life expectancy of modern African American families. Niewiadomska-Flis argued that a new genre of rap records—such as Goodie Mob’s ‘Soul Food’ and Dead Prez’s ‘Be Healthy’, both advocating for healthier vegan Soul Food—celebrate African American heritage while educating children on the dangers of fast and unhealthy food.

Marta Usiekniewicz (University of Warsaw) also focused on eating, discussing unusual consumption patterns in John Layman and Rob Guillory’s graphic series Chew (2009-2016) as new representations of masculinity. She associated capitalism with cannibalism, in a universe where eating is perceived as a sign of weakness, a poor work ethic, loneliness, and celibacy. During panel questions, references to the racialization of cannibalism and the exoticization of Asian foods were made in relation to other American series which also center on consumption and/or cannibalism, such as the TV series iZombie (2015- ) and Hannibal (2013-2015). The treatment of non-White characters and the new stereotypes of masculinity portrayed in these shows through their food and eating habits captivated the audience. Fittingly, these discussions continued during the conference dinner, along with the millennial and post-millennial appetite (no pun intended) for zombie shows and post-apocalyptic predicaments. 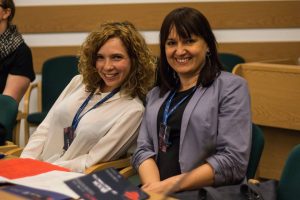 While some presentations could have been more in depth, the panel questions and remarks never failed to bring about innovative insights and constructive criticism. The thematic panels worked well to encourage such discussion. Throughout the conference, conviviality was not only facilitated by the core number of delegates and the location on campus; the dynamism of the organizing committee, and the dedication of local student helpers, made for smooth logistics and great comfort. New ideas were welcomed and praised, discussions encouraged, and every delegate left with the promise to come back for the next event. Excitement and Recreation? Extraordinary and to be Remembered? See you in Lublin in 2020!

Léna Remy-Kovach is a doctoral student at the University of Freiburg, Germany. She holds B.A.s in both English and Italian Studies and an M.A. in American History from the Université de Strasbourg, France, as well as an M.A. in Indigenous and Canadian Studies from Carleton University, Canada. Her current research projects include the commodification of Indigenous monsters in Euro-American horror TV series, the use of classic European monsters in Indigenous literature about colonialism, and the imagery of hunger and cannibalism in recent Young Adult fiction by Indigenous writers. Her Ph.D. thesis focuses on the notions of healing and (re)conciliation in contemporary Gothic Indigenous literature from Turtle Island (Canada and the United States.)