‘Civil Rights Documentary Cinema and the 1960s: Transatlantic Conversations on History, Race and Rights’, The British Academy, 24-26 May 2016. 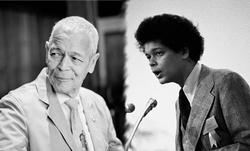 Hosted by the British Academy, this interdisciplinary conference brought together scholars and filmmakers from across the globe to engage in a transatlantic exchange of ideas around film production, activist subjects, and historical research in the context of civil rights cinema, history, and cultural memory. Anne Morrison (Chair of BAFTA) and chief organiser Sharon Monteith (University of Nottingham) opened the three-day event by highlighting the importance of collaboration, framing the conference as a forum for organic discussion. In a refreshing change to the conventional format, the conference was structured around screenings of documentary films and emphasis was placed on audience participation. The event was held in honour of Julian Bond, former chair of the National Association for the Advancement of Colored People (NAACP) and founder of the Student Nonviolent Coordinating Committee (SNCC). Bond was set to play a central role in the conference, but tragically passed away in August 2015. The end of the first day saw a fully booked event in celebration of Bond’s life, including a screening of Julian Bond: Reflections from the Frontlines of the Civil Rights Movement (2012), an intimate biographical documentary by independent filmmaker Eduardo Montes-Bradley. The vibrant and poignant conference was a fitting tribute to one of the key figures in American civil rights.

The remarkable collection of films shown throughout the conference demonstrated how documentaries could intervene in the historiography of the civil rights movement. The makers of these films, often in collaboration with historians, used their documentary films to question dominant narratives, uncover unknown stories, and expose overlooked figures in the civil rights movement. ‘A Bridge to Freedom’ (1987), arguably the most significant episode in the seminal civil rights television series Eyes on the Prize (1987-1990), served as an appropriate starting point. Both The March (2013) and At The River I Stand (1993) challenged the King-centric accounts of the March on Washington in 1963 and the Memphis Sanitation Strike in 1968; emphasising grassroots organisation through varied testimonies in the former and attention to the role of other leaders in the latter. Ballots and Bullets (2015) and Scarred Justice (2010), the two films shown on the final day, continued to demonstrate the medium’s ability to enrich the historiographical debate surrounding civil rights. Focusing on the black landowners’ support for civil rights workers in Mississippi and the 1968 ‘Orangeburg Massacre’ in South Carolina respectively, these films illuminated two unfamiliar stories of grassroots civil rights activism and confronted the persistence of inequality in the United States. 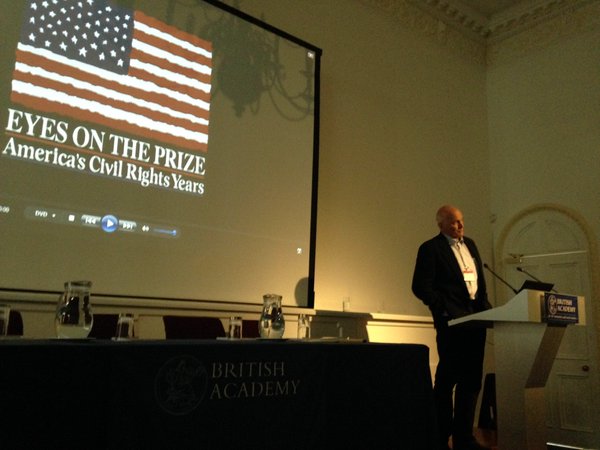 John Else, Series Producer of Eyes on the Prize, introduces the episode ‘The Bridge to Freedom’. Source: @Raceandrights Twitter

In the context of these film screenings, the ‘Role of Academic Consultant and Researcher’ panel discussed the practicalities of collaboration between filmmakers and historians. Addressing the tension between accurate reporting and interesting viewing, this panel dealt with the challenges of documentary filmmaking. ‘False memories’, marketability, and gaps in coverage were all raised as potential issues, reinforcing the importance of cooperation between filmmakers and historians. Further examples of practical limitations were also evident in the ‘Eyes on the Prize / At the River I Stand’ panel, which saw excited discussion after Judy Richardson revealed the difficulties faced when licensing footage, especially of Martin Luther King whose image is guarded by his descendants.

The importance of particular conventions to the production of a documentary film, capable of intervening constructively in the historiography, was considered throughout the conference. When discussing their films, Jon Else, Allison Graham (University of Memphis), David Schulman and Judy Richardson all prized narration as an essential tool to anchor complex and multi-layered narratives. Graham argued that the presence of a narrator strengthened documentary films as it allowed for more intricate explorations and guarded against Hollywood-style binaries that pit heroes against villains. Matthew Graves (University of Mississippi), who propelled his examination of the 1962 integration of Ole Miss with talking heads alone, challenged this point during the panel discussion that followed the screening of his film. Although delegates agreed that testimonies from scholars and contemporaries were a vital element of documentary films, there was a consensus that Graves’ film suffered from a lack of narration, which would have been valuable in contextualising the rioting at the University of Mississippi and the students’ recollections of it. Rebels: James Meredith and the Integration of Ole Miss (2012) raised further issues concerning the narrative arc of documentaries, the presentation of events in isolation, and the pitfalls of tidy conclusions that imply redemption. In addition, whilst the majority of the filmmakers stated that they read widely and liaised with academics before embarking on the production process, Eduardo Montes-Bradley saw the creation of the documentary itself as a learning process. He saw no need for extensive preparation and preferred to allow the documentary to develop organically. This refreshing take on filmmaking invigorated debate and intrigued filmmakers in the audience. 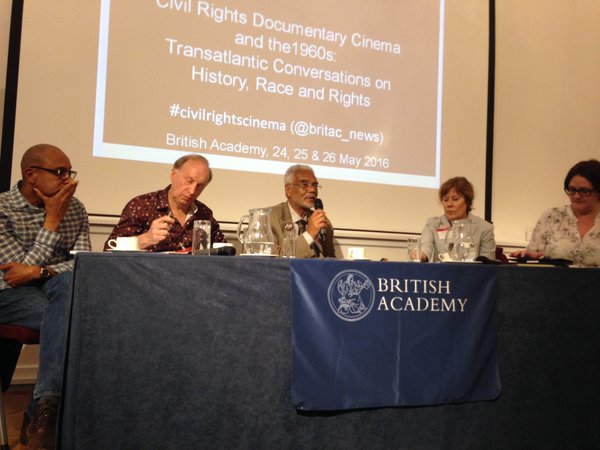 While the practicalities of documentary filmmaking were a significant focus, the event married these discussions with academic perspectives. Stephen Tuck’s (Pembroke, Oxford) opening lecture, ‘The Other Special Relationship’, was a prime example of this, spotlighting two of the conference’s key themes: the links between civil rights activism in the UK and the US, and the need for a nuanced understanding of segregationists. Both topics are underrepresented in accounts of the civil rights movement. The tendency for scholars to concentrate on the US civil rights movement was one of the most salient points in Tuck’s discussion and was addressed on the second day during the ‘Bridging the UK and US’ panel. The session focused on civil rights activism in the UK, beginning with excerpts from four documentaries produced by the Black Audio Film Collective (BAFC), which investigated black identity and culture in Britain and emphasised the transatlantic exchange of ideas between academics, activists, and filmmakers. The clips displayed the range of topics covered by BAFC and their experimental approach to cinema. It was clear that the Hackney-based group were seeking to push the boundaries of documentary filmmaking; they adopted an artistic style, a poetic tone, and made unconventional use of archival footage. After the excerpts were shown, two co-founders of BAFC, John Akomfrah and Reece Auguiste (University of Colorado), discussed the BAFC’s films. Extending to the audience, the conversation considered the collective’s relationship with Channel Four, the emergence of innovative independent filmmaking in the 1980s, and how their films explored ‘blackness’ as a marker of identity and a claim to political visibility. Their ideas resonated with Stuart Hall’s ideas of identity as a continuing process of cultural retrieval. 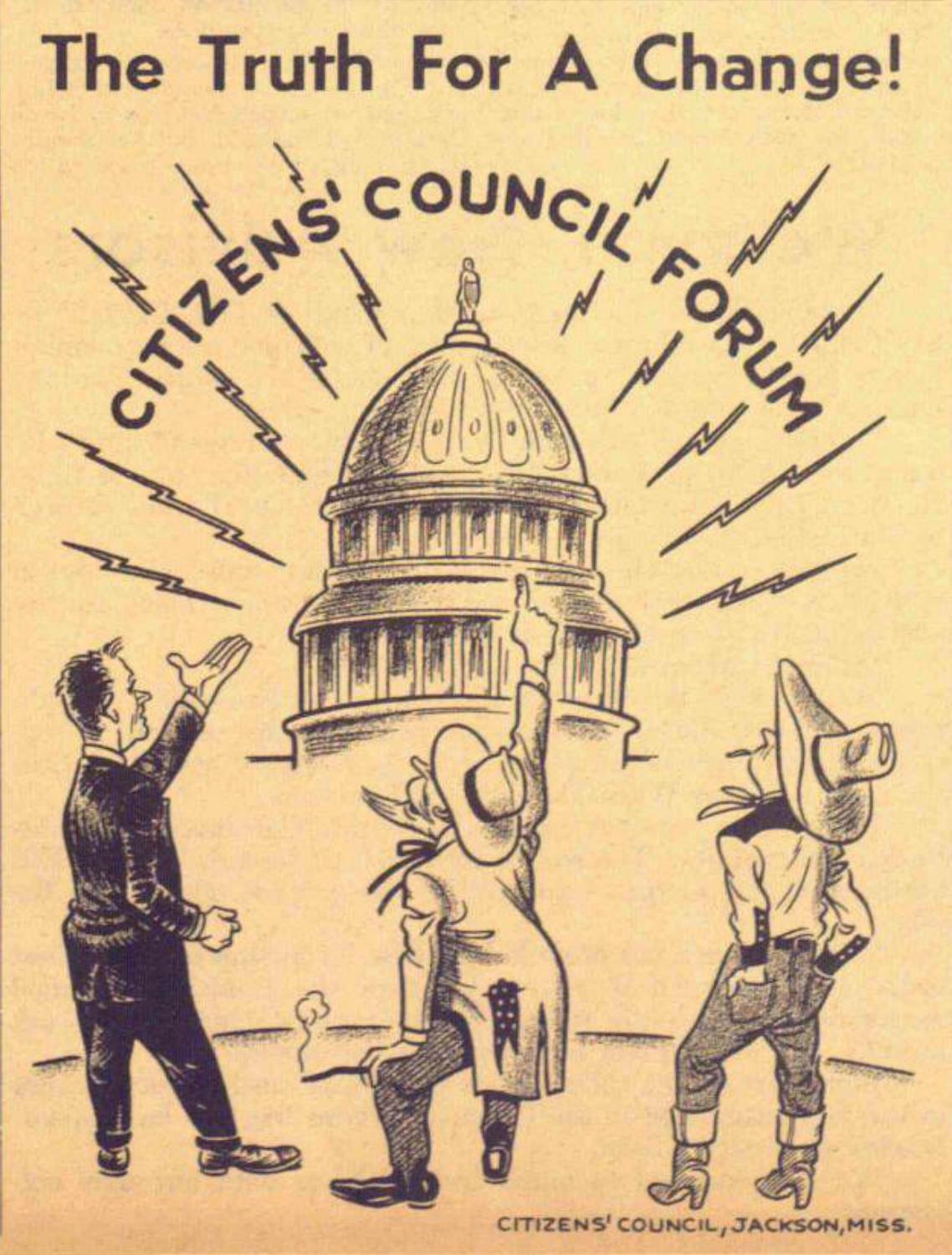 Advertisement for the Forum in The Citizens’ Council newspaper Source: www.citizenscouncils.com

Segregationists, the second theme addressed by Tuck, was the focus of the ‘How Segregationists Used the Media’ panel, which successfully complicated assumptions about segregationists in popular memory.  Scott Weightman’s (University of Leicester and University of Nottingham) paper focused on the Citizens’ Council Forum (1957-1966), a segregationist television series. He revealed the Forum’s sophisticated tactics, as well as its failures, and exposed a much-neglected aspect of the opposition to the civil rights movement.  Documentary filmmakers expanded this discussion to address the difficulties faced when attempting to attain first-hand testimonies from segregationists.  Matthew Graves revealed that he had been unable to find segregationists willing to be interviewed for Rebels, and the total absence of segregationist women in the documentaries was raised during the ‘Uncovering Civil Rights Histories’ panel. Jon Else (UC Berkeley) noted that the Eyes documentary used all-white crews to interview segregationists and sought to allow them to ‘be their best selves’. Providing leeway for segregationists to reinvent their past, though necessary to encourage them to speak, emphasised issues pertaining to what extent they should be allowed to present their version of events without challenge or contextualisation. This panel reinforced discussions of both the strengths and limitations of documentaries in uncovering hidden narratives and highlighted an area of civil rights history that warrants further investigation by scholars and filmmakers.

Coming full circle, Sharon Monteith closed the conference by reasserting the importance of collaboration—both interdisciplinary and transatlantic—in exploring aspects of the civil rights movement which remain hidden. Citing the conference as an example, she underlined the demonstrable benefits of cooperation between academics and filmmakers, particularly in the changing cultural context within which civil rights documentaries are being produced. Her final remarks focused on the future, encouraging continued exploration of collaborative methods for compelling scholarship and documentary cinema, with talk of another meeting and the possibility of an edited collection. The vibrant discussions, along with the ties forged between delegates and speakers, ensure the legacy of this momentous conference. You can keep up-to-date via the Centre for Research in Race and Rights’ Twitter feed and website.

Scott Weightman is a Midlands3Cities AHRC funded History and American Studies PhD student based at the University of Leicester and the University of Nottingham. His research project assesses the use of mass media by segregationists in their effort to defend the continuation of segregation during the 1950s and 1960s. For more information see: http://bit.ly/1iTqPmJ
View all posts by Scott Weightman →
Tagged  1960s, Black History, C20, Cinema, Civil Rights, Documentary Filmmaking, Race, Transatlantic.
Bookmark the permalink.