BrANCA’s first reading group of 2015 was hosted by Dr. Ed Sugden and took place at King’s College, London on 26 June. The selected text for the reading group was Sutton Griggs’s novel Imperium in Imperio (1899). Griggs’s self-published text has often been described as utopian, envisioning an all-black nation within Texas. The aim of the reading group was to explore Griggs’s little-read novel under the rubric of “Hope/Pessimism.” It was read alongside four theoretical texts which set out some of the key terms in the two critical fields of enchantment and “Afro-Pessimism.” Our discussion aimed to explore the ways in which these two critical reading strands contrast and overlap.

Following introductions from the thirteen participants, which included academics from universities spanning the UK, we began our discussion by focusing on Griggs’s text itself. Each of the group were asked to explain how they had first come across the novel, a discussion which highlighted its prevalent exclusion from the literary canon. Popular perceptions of Griggs as a poor prose stylist were also explored, grounded in a discussion regarding whether or not reading the novel had been an enjoyable experience.

While the novel has often been described as utopian, one of our key discussions concerned whether there were grounds for a slightly more conservative reading. We explored the rhetorical framework in which the novel operates, highlighting the American concept of emancipation and the representation of a model that was based on the American Revolution. This was used to authorise the aims of the clandestine group of the Imperium to establish an all-black nation within Texas. To do so we examined the tension between conservatism and radicalism within the novel, which emphasized the difficulty in retrospectively applying such a framework on a text whose mode of writing or speaking was always already limited.

We also questioned accusations that Griggs’s prose style is weak. We explored whether the causally unlinked events, the disjointed narrative temporality with its retroactive explanations and the new sets of premises that each chapter introduces, was an expression of Griggs’s sensitivity to the status of national citizenship for black Americans at this time which was definitional-ly uncertain. Such a reading would indeed justify Imperium in Imperio’s mode of modelessness. Our two hour discussion also touched upon the ways in which female characters can be read as driving the novel’s plot. This led to debates concerning the text’s emphasis on the lack of employment opportunities for educated black Americans, and the increasing violence evident in representations of literal holes in floors. It was also noted how this undermined and undercut events in the narrative.

Following a short break, we turned to the critical texts selected for discussion: Nancy Bentley’s, ‘In the Spirit of the Thing: Critique as Enchantment’, (2013) Robyn Wiegman’s, ‘The Ends of New Americanism’, (2011) Anne Cheng’s Introduction to, Second Skin, (2013), and finally, Fred Moten’s, ‘Blackness and Nothingness’ (2013). Selected to interact with both each other and Sutton Griggs’s novel, the essays all share a critical desire to come to terms with a perceived crisis in the Humanities. After the long reign of critique as dominant academic practice, where does one turn when the hermeneutics of suspicion seem to fall short of its goals? 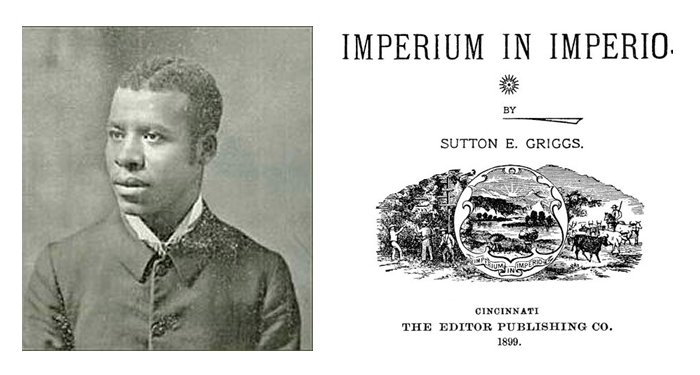 Introductory comments were then given regarding the political implications of advocating for enchantment or pessimism in light of the terrorist attacks in Charleston and the murders of Martin, Garner, and Brown. Afterwards, our discussion turned towards Nancy Bentley’s text and the relationship between enchanted critique and surface reading. Considering Stephen Best and Sharon Marcus’s argument that critique has run its course and must be replaced by new modes of reading, participants questioned how this practice may affect pedagogy. Although both enchantment and surface reading are assertive in their desire to move away from post-structural critical practice, neither approach is able to provide the tools to undo critique. As such, we discussed how these reading modes may function in practice and whether they are challenged by texts and archives that seem to demand critique, such as Griggs’s Imperium in Imperio. Two possibilities stood out as alternatives to paranoid reading: reassessing the contribution of pleasure and earnestness in scholarly reading, and questioning the position of history and the legacy of new-historicism. The latter enables enchantment to imagine alternative histories whilst questioning the primacy of context.

Although all participants were sympathetic to these calls for a modification of critique, we also questioned whether the strategies of Wiegman’s ‘New Americanists’ were guilty of missing their political mark. Wiegman provided a useful counterpoint to Bentley’s work as her essay acknowledged the desire of the critic to feel political which has, in turn, led to a proliferation of criticism in which recognising hegemonic structures is the primary objective of academic work. In our discussion, we found that the common thread of these texts was their questioning of the critic’s dominant position in relation to the object of study; both Wiegman and Bentley express a desire to change the power dynamics of this relationship. Particularly due to the ineffectualness of poststructuralist’s political ambitions, we discussed that enchanted critique may recognise these failings and demand a humbling of the critic. At this point the discussion turned towards the novelty of the approaches articulated in our readings. Throughout our conversation we expressed that the discussions at hand were part of a cycle of new historicism and new formalism. In many ways, even Wiegman’s ‘New Americanists’, who hailed their work as innovative and radical, are indebted to tradition and a part of a repetitive cycles of criticism.

We concluded the afternoon’s discussion with a reading of Moten’s piece as a performance of the criticism it seeks to achieve. His meditation on nothingness and the break demonstrates how poesies can be used as a mode of critical engagement, particularly when the object of study lives outside of the social. When read alongside Griggs’s utopian novel which resists enchanted critique, Afro-pessimism demonstrates the continued necessity of politically motivated scholarship. Subsequently we, as critics, must recognise that the problem with critique is not that is has proven ineffectual, but that its work is not yet complete. Therefore, any usefulness of strategies such as Bentley’s may be limited to scholarly disciplines that do not confront processes of racialization and racial violence.

Overall, attending the first of BrANCA’s 2015 reading groups was an enjoyable and enriching experience and it was a wonderful opportunity to meet academics from across the United Kingdom who share similar interests. We are very much looking forward to attending the second reading group which is to take place at the University of Nottingham on 18 September, 2015. We would like to thank the BrANCA committee and organisers and particularly Dr. Ed Sugden who organised such a lovely day at King’s College, London. If you would like to attend the next reading group you can follow @brancaUK on Twitter or visit www.branca.org.uk.