Nestled amongst picturesque grounds, the American Museum in Britain resides in Claverton Manor. Its authentic, period display rooms were shipped from America and reassembled in the museum, including a farmhouse tavern from eighteenth century Massachusetts and a spectacular New Orleans bedroom from the 1860s. Aside from the remarkable rooms, the museum boasts chronological galleries dedicated to periods of American history leading up to the Civil War.

Officially launched on 19 March, the museum’s latest exhibition is, ‘An American Toy Story’. From Mickey Mouse to James Bond, the exhibition showcases vintage toys and memorabilia from an eclectic range of films. As explained by Chief Curator Kate Hebert, the exhibition celebrates toys whilst embracing the sense of nostalgia that one feels when recognising a beloved childhood relic. In my case, this emotional response was triggered by the section dedicated to Disney Princess dolls. Beyond the emphasis on gender stereotyping – there is a pink design painted on the display’s wall – there is a further emphasis on the role the dolls performed in a child’s playtime.

A panorama of the exhibition. Photo credit: Alex Dixson

This sense of separation is a prominent theme of the exhibition. The toys on display are divided by genre, and range from the 1930s toys depicting Shirley Temple and Charlie Chaplin to modern classics such as Star Wars. The ‘Classic’ genre area features toys from the early film-making era, the earliest of which is a Felix the Cat plush doll from the 1920s. Such toys demonstrate how those once marketed to children have now become collectible in their own right. The notions of ‘value’ and ‘collectability’ repeated throughout the exhibition – an idea that is, to a certain extent, up to personal interpretation. Age plays a vital role in this distinction (often earning the label “vintage”) making a toy both valuable and collectible. Modern uses of the term ‘collectible’ also regard age but increasingly revolve around phrases of ‘limited edition’ or ‘mint-in-box’, relating to the toy’s physical condition. Personal interpretations of value, on the other hand, depend upon an immediate response to the role that toy played in childhood.

The ‘Animation’ section relies heavily on Disney feature films, giving particular notice to Mickey Mouse, Snow White and the Seven Dwarves (1937), and Toy Story (1995). The significance of the latter was made particularly prominent. The exhibition makes reference to Toy Story by highlighting its importance as the first full-length feature film starring toys. Specifically, the film embodies how, ‘the toy and film relationship went full-circle’[1] by featuring well-known toys, such as an Etch-A-Sketch, and confirming its intertextuality with the toy industry.  It must also be noted that a large proportion of pieces on display are now attached to the name ‘Disney’ after the corporate takeovers of Pixar, Lucasfilm and Marvel, despite this not being the case when the toys were released.

The exhibition also deals with the development of movie merchandise away from toys-for-play towards toys-for-emulation, allowing audiences to ‘become’ their favourite characters. The ‘Action’ segment is devoted to James Bond, and as a result displays toys aimed at boys wanting to perform their inner-spy. A ‘James Bond, Secret Agent 007 Action Pak’ is specifically telling in this regard, offering a secret writing pen, message carrier projectile, alert whistle and disappearing paper — everything an aspiring spy could want. 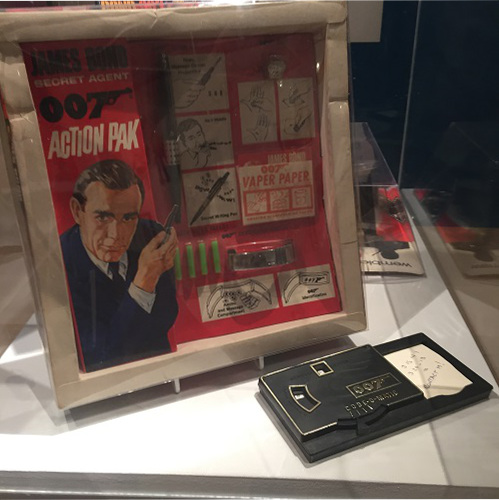 ‘Sci-Fi’ is the final section of ‘An American Toy Story’, mainly focusing on the Star Wars franchise. Action figures of principal characters and models of the ‘Millennium Falcon’ take centre stage amongst larger figures of recognisable characters from a galaxy far, far away. This area also includes examples from E.T. The Extra-Terrestrial (1982) and The Terminator (1984). Perhaps playing with ideas of masculinity this section presents Lego products and dolls which are exclusively male, against a blue and starry backdrop creating a contrast to the pink designs showcased in other parts of the exhibit. The ‘Action’ toys are also located in a blue section which, when compared to the pink and other blue areas, further emphasise gender stereotypes enforced by the toy industry.

In discussing the exhibition, Hebert described the challenge in deciding what was to be included and what was not. Ultimately, the pieces harmoniously (and somewhat chronologically) track the development from toy to collectible. Of course, adding more films and their toy counterparts would enhance the exhibition, but it is obviously impossible to feature every one of these instances due to the sheer size of film and toy industries. That is not to say, however, that the collection is lacking — far from it.  All pieces on display effectively emphasise the commercial imperatives of film studios acting synergistically across a variety of forms.

The exhibition is on display at the American Museum in Britain until 30 October, 2016.

Alexandra Dixon is an MRes student in the American and Canadian Studies department at the University of Nottingham. Her thesis explores the relationship between movies and their inclusion in a theme park landscape. Foregrounded in debates of a ‘post-classical’ Hollywood film style, the thesis aims to examine the cinematic conglomerate era that promotes film texts across a variety of platforms. Films derived from theme park attractions (such as Disney's Pirates of the Caribbean franchise) will then be considered in relation to these ideas in order to illustrate and evaluate the importance of the theme park connection in contemporary filmmaking.
View all posts by Alexandra Dixon →
Tagged  C20, C21, Celebrity, Media, Popular Culture, Transatlantic.
Bookmark the permalink.