HOTCUS 2015 was hosted by the University of East Anglia, tucked away in the wilds of the Norfolk countryside. Historians of the Twentieth Century United States (HOTCUS) gathered from the UK, and as far afield as Canada, the U.S. and Spain. Now in its eighth year, the HOTCUS Annual Conference has established a tradition of presenting leading, exciting, and important research by post-graduates and academics alike. 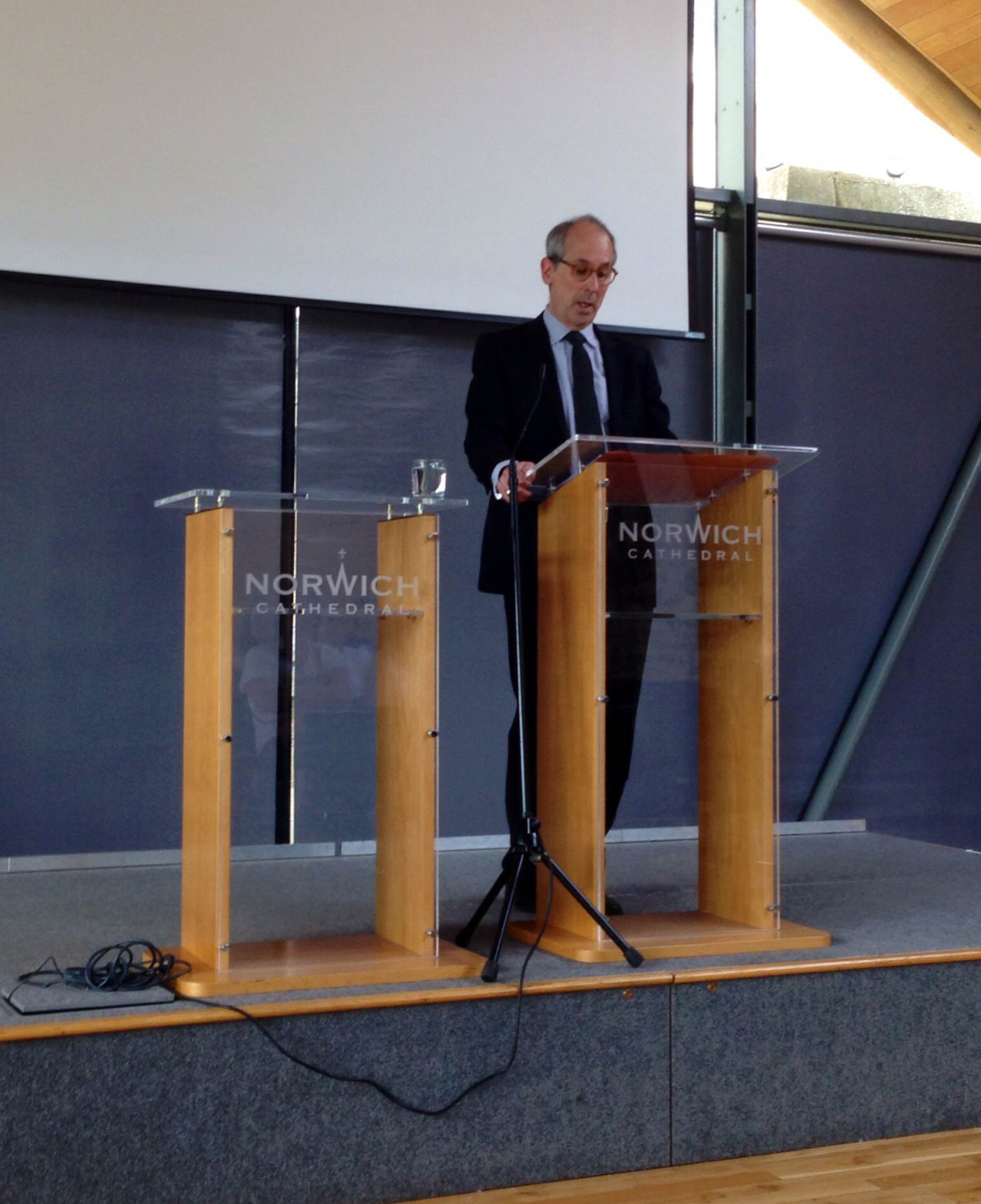 Professor Gary Gerstle giving his plenary lecture, ‘Colossus with Feet of Clay: The Troubled State of Government in Modern America’.

The conference began with Professor Gary Gerstle’s (University of Cambridge) plenary lecture, ‘Colossus with Feet of Clay: The Troubled State of Government in Modern America’. It was a tour de force of fundamental questions of America’s history: from territorial expansion, to liberty, race and immigration, and even national security. This comprehensive address of the foundational issues of the United States served to create a cohesive umbrella under which many of the weekend’s panels would fit. On a personal note of interest, there was a discussion of incorporation, or not, of territories into the Republic, depending on location, race, religion, and security. The rest of Friday evening was spent sipping wine in Norwich Cathedral cloisters, and dining at the conference banquet.

Saturday morning gave host to panels on the Cold War, conservatism, race, protest and the South. The ‘New Perspectives: the U.S. Cold War and Southeast Asia’ panel was connected chronologically and thematically through nation building, destruction, and the malaise of U.S. foreign policy. The diplomatic history of Donald Heath’s attempts to keep France committed to Indochina in the early 1950s fed into a later focus on the legacy of CIA agent Edward Lansdale. Specifically, how he has become representative of larger trends in U.S. foreign policy. Non-domestic strategies of the U.S. was taken further in a military reanalysis of rejected planning proposals during the Vietnam War, and a consideration of whether it was an inevitable defeat. The following Cold War panel, ‘New Perspectives on the Cold War’, neatly fused issues home and abroad, with discussion on anti-colonialism, captivity in war, civil defence against nuclear weapons, and a paper on interwar political conflict and anticommunism.

The afternoon offered an opportunity for a complete change of pace with ‘Travel, Race, and Social Change’. It provided a discussion concerning the culture of engagement in holidays in the American countryside. Particularly, how vacations were commonly orientated towards ideas of the frontier, reconnecting with nature, going back to basics, and how the trend moved towards the futuristic holiday complex and resorts during the affluent boom decade of the 1950s. This was followed by an examination of the impact of WWII on racial segregation on public transport. Not just the growing rejection of segregation at home whilst fighting fascism abroad, but the confidence offered African Americans, who in uniform, were empowered to challenge the engrained segregationist attitudes. 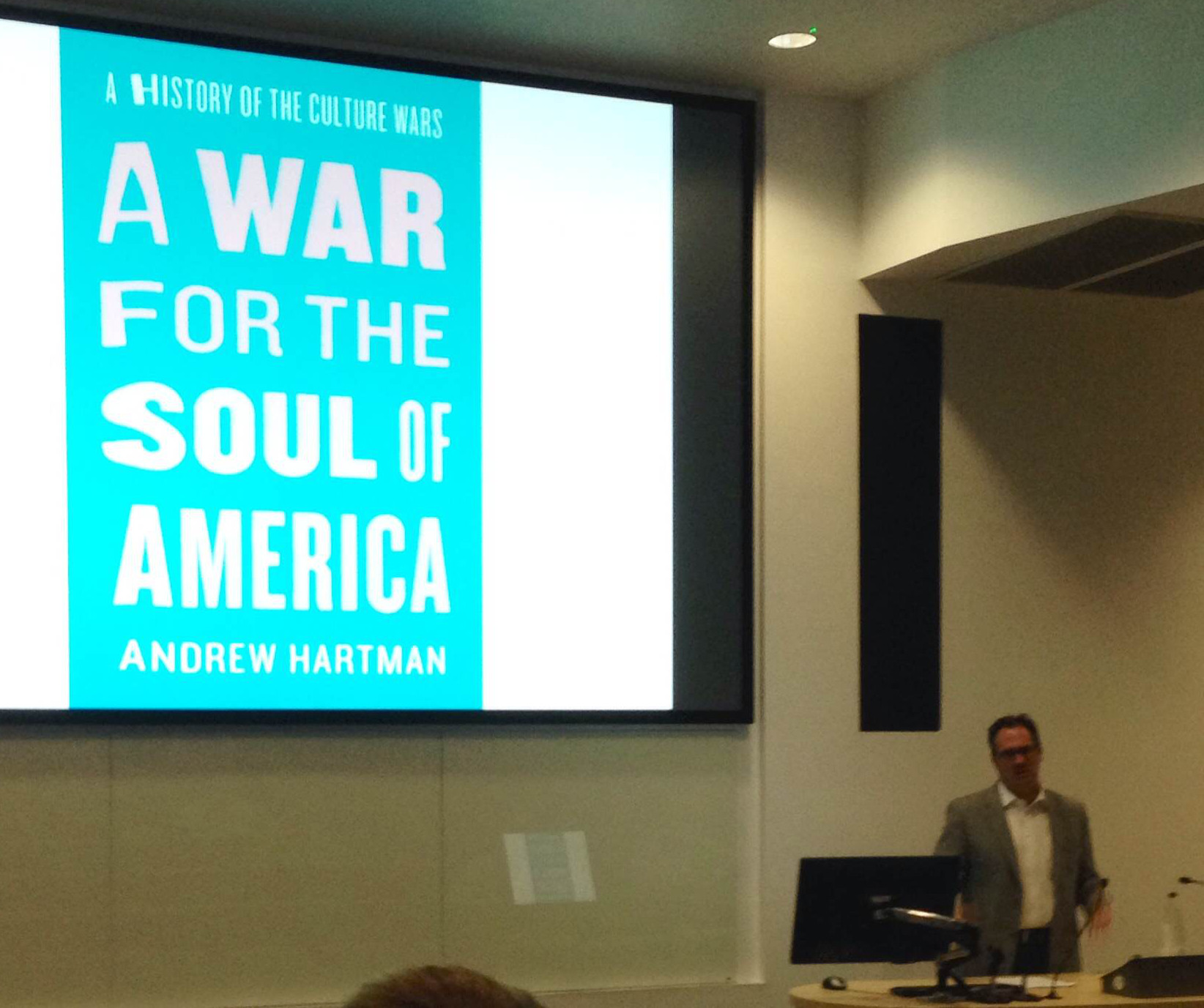 That evening, the second plenary lecture was delivered by Dr Andrew Hartman of Illinois State University. Dr Hartman led delegates through his soon-to-be-published book on the Culture Wars. He explored how the New Left and politicisation of rebellion in the 1960s was rooted in the 1950s, and how its legacy was the rise of neo-conservativism in the 1980s. It is an ambitious and far reaching project, covering a vast array of issues in modern America, and served as excellent intellectual stimulant for a consequent question and answer session. Afterwards it was necessary to unwind, and what better way to do so than spend a night in the historians’ home away from the office: the bar.

Sunday brought with it more engaging papers. ‘American in the World’ was a collection of talks on big issues and their even bigger legacies. The exploration of Nasserism gave a timely revisit to the explosive episodes of the 1950s, especially considering the current regional conflicts. This was furthered by an analysis of Franco, which illuminated the inherent problems of dictatorship in Spain and the relationship with NATO—do geostrategic considerations override issues of principle and government? It would appear they do. There was not much time to consider this however, as the attendees were soon treated to lively presentation, charting Dwight D. Eisenhower’s road to the White House. Led through the various facets of his political astuteness and skill, it appears Ike had designs on the presidency as early as 1945, whilst still stationed in England after the War.

Other panels covered topics of the anti-abortion movement, Hollywood, First Ladies, education policy, religion, and political economy. The breadth of intriguing projects presented testifies to the strength of the conference, and indeed the field. The weekend was a triumph. With the closing of HOTCUS 2015, it only remains to say a big thank you to the committee and UEA for all the organising and hosting. Here’s to next year in the Netherlands!

See you down the road.

Review: 'The Historical "Dispute of the New World": European Historians of the United States and Eur...
Review: The Half-Life of Philip K. Dick
Review: Annual Meeting of the American Comparative Literature Association 2017
Review of the Tenth Annual ‘Wikimania’ Conference
Review: Exposing Secrets: The Past, Present and Future of U.S. National Security Whistleblowing and ...
Review: Maple Leaf and Eagle Conference - "North America: Inclusive, Exclusive, and Exceptional" (On...
What We Learned: Organiser's report on the 1st Americas Postgraduate Conference at the UCL Institute...
Report on the BrANCA Reading Group Session ‘Archival Pleasures’

Ben Walker is a doctoral candidate in history, at the University of Manchester, due to submit summer 2015. The working title of his thesis is 'Demanding Dictatorship: US-Philippine Relations 1946-1969'. The project broadly speaking is an assessment of US foreign policy in the Philippines, and how this can help explain US policy failure elsewhere in the developing world, especially in the Vietnam War. Ben has also conducted research at NARA, the LBJ Presidential Library, and the Hoover Institute.
View all posts by Ben Walker →
Tagged  C20, C21, Cold War, Cultural History, Foreign Policy, HOTCUS, Politics, Popular Culture, Presidents.
Bookmark the permalink.