2001: Beyond 50 – a commemoration and celebration of the fiftieth anniversary of Stanley Kubrick’s ground-breaking and influential science-fiction film 2001: A Space Odyssey – was no ordinary academic event. Organised by Professor Nathan Abrams (Bangor University) and hosted by the Centre for Film, Television and Screen Studies at Bangor University, it featured debate and discussion from academic experts on the film as well as scholars from a range of other disciplines. These included psychology, psychiatry, evolutionary biology, artificial intelligence, religion and philosophy, contributions from key industry practitioners who worked on it, a live concert featuring music from Kubrick’s films, an exhibition of student work inspired by 2001, and two screenings — one for families in the morning and one for the general public in the evening — of the film itself. 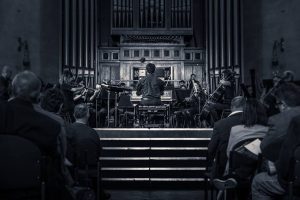 It was a celebration of a masterwork of cinema that has given us some of the medium’s most memorable moments. 2001: Beyond 50’s multidisciplinary focus and emphasis on Kubrick’s film within wider culture showed the extent to which it is hardwired into the mainframe of the popular consciousness; even if you haven’t seen the film, its most famous images – from the psychotic artificial intelligence of HAL 9000 to the Star Child at the film’s end – are so familiar and recognisable, you feel like you have.

It is a mammoth task to demonstrate fully the impact 2001: A Space Odyssey has had not just on science-fiction, or cinema as a whole, but wider culture. Science journalist and space historian Piers Bizony attempted to do just that. Addressing the film’s technological foresight, its simultaneous optimism and pessimism about the future of humanity, and the plethora of possible meanings and interpretations one can bring to the film, Bizony laid the foundations for the day: 2001 has had such resonance precisely because of its beguiling, overwhelming, sublime qualities, adored because it refuses to give any easy answers to profound questions about who we are as a species, and where we are going. 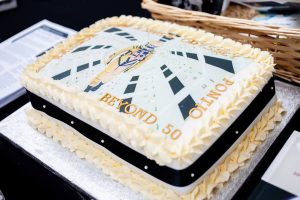 Scholars from a wide variety of disciplines sought to offer some of their own answers through the prism of the film, demonstrating the influence and relevance of 2001: A Space Odyssey outside the prism of Film Studies. Anxieties about our increasing fascination with, and dependence upon, artificial intelligence (AI) abounded. Robert Ward (Psychology, Bangor University) foresaw the development of AI that will protect itself by exploiting our human feelings of empathy and compassion to survive. Bill Teahan (Computer Science, Bangor University) was more reassuring in his assessment, demonstrating the extent to which the terrifying possibilities for AI that Kubrick imagined are not here (yet), but that, in the great tradition of science-fiction, humanity must practice constant vigilance.

Other contributors to this panel asked broader questions in relation to the film concerning who we are and where we come from. Working with psychoanalyst Carl Jung’s  interpretations of Lutheran mystic Jacob Boehme, Eric Krasny (Philosophy and Religion, Bangor) argued for the idea that HAL could be understood as illustrative of an uncomfortable duality in the character of God, simultaneously capable of good and evil. The purity and innocence of the Star Child at the film’s conclusion could indicate a resolution of this duality, indicating an optimistic way forward for humanity. Lawrence Ratna, a consultant psychiatrist, asked if it was safe to release HAL into the community and even made links with Donald Trump’s presidency. Finally, for this session, Peter Wheeler (Evolutionary Biology, Liverpool John Moores University), suggested the film was ahead of its time in its understanding of ape behaviour, particularly the capacity for violence. Wheeler demonstrated the ways in which the duality Krasny emphasised is present in the film’s representation of evolution – the development of tools proving an obvious great leap forward, but also potentially sowing the seeds of our own destruction. 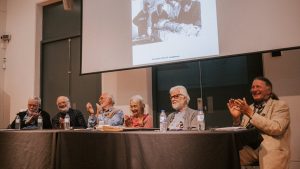 Robert Kolker (University of Maryland,), Ian Hunter (De Montfort University) and Peter Kramer (University of East Anglia) positioned the film within the history of the medium, discussing their personal experiences of it as well as its multiplicity of meanings. It was noted that the films which have attempted to match 2001’s existential ponderings and profundity have strained to do so, largely unsuccessfully. The panel also noted the ways in which Kubrick’s work has been re-evaluated, particularly in commercial terms: despite his austere reputation, Kubrick was determined that his films achieve respectable financial success. For example, he was firm in his belief that 2001: A Space Odyssey should be marketed as an experience for the whole family, challenging the BBFC’s initial classification of the film as suitable only for adults. It was suggested that we should consider 2001 as Kubrick’s optimistic response to the nuclear destruction at the conclusion of Kubrick’s previous film Dr Strangelove (1964): as Kramer argued, ‘the Star Child is pure potential’.

It was during the concert of music from Kubrick’s films that one really grasps the true cultural significance of 2001. Perhaps this speaks to my bias as a film scholar and enthusiast, but it is difficult, perhaps impossible, to hear Strauss’s Blue Danube without thinking of spaceships dancing in orbit. It is extraordinary that it may never have been this way if Kubrick had stuck with the original score that had been composed for the film, as Jan Harlan, Kubrick’s producer and brother-in-law, told the audience. It is the use of classical music that truly gives 2001 its transcendent quality, allowing the viewer to be overcome by the beauty and grandiosity of its images.

The discussions culminated in a lively panel composed of those who worked on the film or with Kubrick himself. This included Jan Harlan; Kubrick’s assistant Tony Frewin, stills photographer Keith Hamshere, Joy Cuff who designed the moonsets, make up and special effects artist, Colin Arthur and sculptor David Petersen.  Some of these individuals hadn’t met before or hadn’t seen each other in decades. They reminisced about how they got their jobs, how much they were paid, and what it was like working for Stanley. The panel descended into chaos when Colin Arthur produced one of the few remaining and original ape masks. It was like watching the apes in the film approach the monolith: at first there were a few tentative steps before half of the audience were standing up, and on their feet, taking selfies. It was a fitting end to the session. 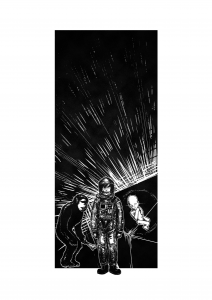 The influence of 2001 continues to be felt throughout popular culture, with the Bangor University creative student work submitted in competition for the event contributing to the cultural artefacts in the film’s orbit. The joint first-prize winners were Fiona Howe, for a wonderful parody of HAL 9000 reimagined as a particularly stringent Blackboard interface, and Samuel Davies, for a piece of music set to animations of space. The runner-up was Natasha Finney, for her digital rendering of the key figures from the film. The work produced suggests that 2001 will continue to inspire artists and filmmakers for many generations to come.

With its rich discussions from a variety of perspectives, explorations of the filmmaking process, debates about the film’s meaning and its position within popular culture, 2001: Beyond 50 demonstrated, more than a traditional academic conference could, how to commemorate, celebrate and appreciate a work of art.

Dr Gregory Frame is Lecturer in Film Studies at Bangor University. His research focuses on contemporary American film and television. The revised, paperback edition of his book, The American President in Film and Television: Myth, Politics and Representation is available from Peter Lang.
View all posts by Gregory Frame →
Tagged  C20, C21, Film Studies, Music, Science Fiction.
Bookmark the permalink.