Represented in the American Hemisphere: The United Kingdom, the Rise of Pan-Americanism, and the Canadian Question

Represented in the American Hemisphere: The United Kingdom, the Rise of Pan-Americanism, and the Canadian Question

This is the sixth post in a special series exploring and discussing artefacts from a selection of Adam Matthew Digital collections. This article uses primary sources from the ‘Confidential Print: North America, 1824-1961 collection, which can be accessed here.

In 1990, Canada became a fully-fledged member of the Organization of American States (OAS). Whilst the diplomatic implications of joining an inter-American political system were obvious, Canadian membership additionally symbolised that Pan-Americanism now encompassed the sovereign British dominion. Although it remains a contested concept, Pan-Americanism is the idea that the nations of the Americas ought to cooperate for mutual benefit because they share a distinct inter-American relationship that separates them from the rest of the world. In its traditional conception, Pan-Americanism did not encompass Canada, because it was considered a European nation in all but geography. This exclusion was solidified by Canadian policy, as for the majority of the twentieth century, Canadians were either indifferent toward or critical of Pan-Americanism. Yet as one of the largest nations in the Western Hemisphere, Canada’s geographic location has complicated the meaning of Pan-Americanism since its modern genesis in the 1880s.[1]

The first two decades of the early twentieth century witnessed the rise of Pan-Americanism and it became a popular topic of debate among United States and Latin American policy-making elites. Although the Canadian government showed little desire to engage with Pan-Americanism during this period, British policy makers realised that if Canada was excluded from any political Pan-American initiatives, British interests in the Western Hemisphere could be affected. The Adam Matthew digital collection ‘Confidential Print: North America, 1824-1961’ provides a valuable insight into the ways in which British policy makers responded to this Canadian question. Through consulting digitised copies of Foreign Office correspondence from within this collection, it becomes clear that British policy makers considered Canada to be a proxy stakeholder in the development of Pan-Americanism. 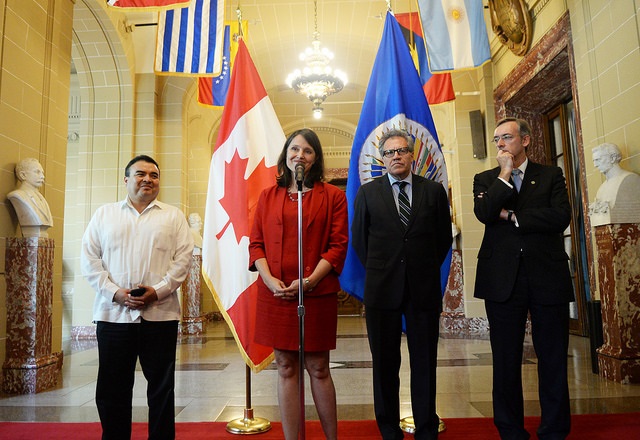 Between 27 December 1915 and 8 January 1916, the United States hosted the Second Pan American Scientific Congress. The gathering brought together Americans from across the hemisphere to discuss a range of issues, from education to public health, and was utilised by President Woodrow Wilson and Secretary of States Robert Lansing as a platform to discuss inter-American cooperation. British officials were prompted by the event to investigate the rumour that Wilson was planning to pan-americanise the Monroe Doctrine and establish an inter-American system of regional integration. The British Ambassador to the United States, Cecil Spring-Rice, reported to Foreign Secretary Edward Grey that Wilson and his confidante Colonel House had begun efforts to establish a Pan-American treaty among the American republics that would guarantee the territorial status quo of signatories and provide for the arbitration of inter-American disputes. The Ambassador outlined that the President was keen to solidify inter-American relations, but was encountering resistance from Chile, given its long-standing territorial dispute with Peru.[2]

Keen for more information, Grey contacted the Chilean Minister to the United Kingdom, Agustín Edwards Mac-Clure. Although the Minister personally advocated the treaty, he believed that the United Kingdom ought to be an additional signatory, because it too was a ‘great American nation.’ He informed Grey that Pan-Americanism should be a vital consideration for British policy makers because of Canada’s geographic position, and he emphasised that the United Kingdom was ‘represented in the American hemisphere.’ Mac-Clure was confident that Wilson would view British involvement as beneficial, because it would stave off potential German and Japanese designs in the hemisphere and allay the fear among Latin American nations of a United States dominated system.[3] Grey agreed and tasked Spring-Rice with convincing House that Britain maintained a keen interest in Pan-American initiatives.[4] 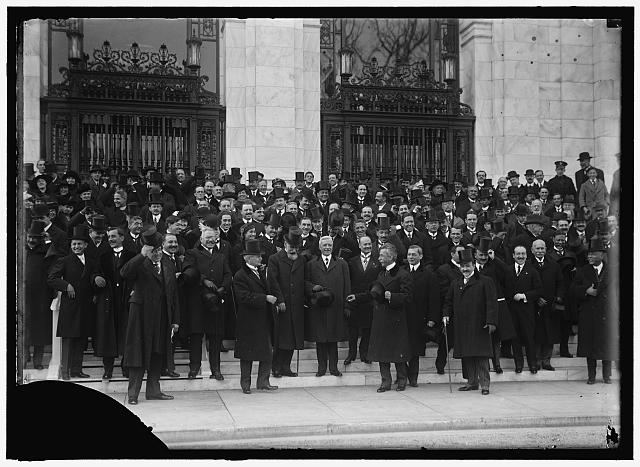 House was receptive to British involvement; however, Wilson did not consider the role of the United Kingdom with much sincerity. As events transpired, British interest made little difference to the success of the Pan-American treaty as Wilson abandoned it in 1917. Chile continued to oppose the proposal and the President shifted his attention to the establishment of the League of Nations instead. Yet this exchange of correspondence demonstrated that British policy makers were concerned with the rise of Pan-Americanism and the future of inter-American relations. Indeed, in May 1916, Assistant Under-Foreign Secretary Ralph Paget informed the Colonial Office that Pan-Americanism needed to become a subject of official correspondence between the two governmental departments, stating that it was an issue that ‘cannot fail to affect the interests of British possessions in America, and particularly the Dominions of Canada and Newfoundland.’[5]

Many decades would pass before Canada’s political relationship with Pan-Americanism would be formalised. Yet during the golden age of Pan-Americanism, Canada was already complicating the notion of a shared Americanness. Once again, the legacy of British colonialism in the Americas played a fundamental role in determining what it meant to be American.

American Studies in Europe: Introducing the Interview Series
“Vaudeville Indians” on the British Stage (British Library)
"[L]ittle difficulties will get to be great difficulties": Joel Palmer and the Office of Indian Affa...
Book Review: West of the American Revolution: An Uncommon History of 1776 by Claudio Saunt
Edward S. Morse: A look at Meiji Japan
Mending Fences: The Broken Bond between Theatre and Film
Chickasaw Gender Roles and Slavery During the Plan for Civilization
‘Still being sent to Nam to protect America's myths’: Anti-war Soldiering and the Challenge to Cold ...

Alex Bryne submitted his PhD in American Studies and History at the University of Nottingham in 2017. His thesis traces the history of the Monroe Doctrine during the early twentieth century and addresses the relationship between notions of national security, regional hegemony, and Pan-Americanism.
View all posts by Alex Bryne →
Tagged  Adam Matthew Digital, C19, C20, Canada, Pan-Americanism, Politics.
Bookmark the permalink.