Islam is one of the fastest growing religious populations in the United States and is set to surpass Judaism as the second-largest U.S. religion behind Christianity by 2050 (Lipka 2015). Muslims in the United States are an ethnically, nationally, and racially diverse religious population representing more than 77 countries and racially identifying as white, black, Asian, and “other” (Pew 2011). Despite 56% of Muslims surveyed preferring to “adopt American customs and ways of life,” having educational, income, and occupational levels on par with average Americans, and sharing similar concerns over Islamic extremism as the general U.S. population, more than half feel that being Muslim in the United States is more difficult since 9/11. For example, 28% have felt people act suspicious of them, 22% have been called offensive names, and 21% have been singled out and searched prior to a flight (Pew 2011). In addition, a Pew Research study (2013) also reports that Muslims experience more discrimination than other marginalized groups including gays/lesbians, blacks, Hispanics, and women. 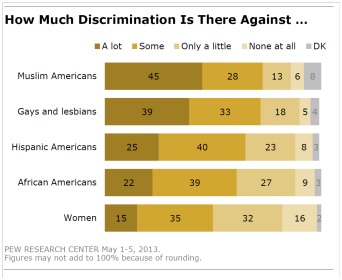 Traditionally, scholars have used the frameworks of Orientalism and Islamophobia to explain the unique forms of anti-Islamic prejudice and the discrimination faced by Muslims. Most of this work focuses on the experiences of European Muslims (Sheridan 2006; Silverstein 2008; Meer and Modood 2009) although after 9/11 scholars have turned their attention toward Muslims in the United States (Rana 2007; Naber 2008; Love 2009; Selod and Embrick 2013; Selod 2014). More recently scholars, including those focusing on European Muslims, have incorporated the racialization framework to complement, rather than replace, Orientalism and Islamophobia to explain how Muslims experience prejudice and discrimination. This paper reinforces the racialization framework by arguing that in the United States Muslims have become victims of race-based violence through the construction of visible archetype of “Muslim” utilizing symbolic markers such as name, dress, phenotype, and language (Naber 2008). How do we explain the experiences of Muslims, who are ethnically, nationally, racially, and phenotypically diverse, in terms of racism?

Though traditionally race has been defined in relationship to phenotype, in particular skin color, Balibar (1991) and others (Naber 2008; Love 2009; Meer and Modood 2009) have examined how culture, religion, national origin, and/or language become racialized. This “cultural racism” (Blaut 1992) is a “process of othering that constructs perceived cultural (e.g., Arab), religious (e.g., Muslim), or civilizational (e.g., Arab and/or Muslim) differences as natural and immutable” (Naber 2008:279). The racialization framework, therefore, explains how, despite racial, ethnic, and national origin diversity, Muslims are singled-out, “identified, [and] given stereotypical characteristics” (Kobayashi and Peake 2000:393) resulting in the construction of a “Muslim race” (Elver 2012).

Orientalism and Islamophobia have operated conjointly in the construction of an image of Islam that is inimical to the West (see Choudhury 2008; see also Cainkar and Maira 2005). Said (1978) describes Orientalism as “a style of thought based upon an ontological and epistemological distinction made between the ‘Orient’ and ‘the Occident’” (2). While no universally accepted definition exists for Islamophobia, scholars have broadly defined Islamophobia (and anti-Muslim sentiment) as a set of prejudicial attitudes (see Bravo-Lopez 2011) or as “an irrational dislike of individuals based on religion” (Salaita 2006). While Orientalist ideology is responsible for the production of stereotypes leading to essentialist misrepresentations of the Middle East, Islamophobia has been used to describe the rise of anti-Muslim sentiment in Europe and the United States. Without abandoning these concepts, the racialization framework extends Orientalism and Islamophobia in ways that connect prejudicial attitudes of Islam (as a religion) and of the Orient (as a civilization) to Muslims (as a people) by incorporating the visibility aspect of race.

Racializing Islam and the “Muslim” Archetype

Halliday (1999) suggests “the attack now is against not Islam as a faith but Muslims as a people” (898). The visible archetype of “Muslim” has been constructed from a particular racial logic that essentializes followers of Islam based on their culture and religion (Rana 2007). I employ Joshi’s (2006) framework to explain how the “racialization of religion” results in the construction of a visible archetype such that “certain phenotypical features associated with a group and attached to a race in popular discourse become associated with a particular religion or religions” (Joshi 2006:211). Not only have race and religion have been used to demarcate “natural” boundaries between groups, race and religion have also been mistakenly considered the product of biology (see Selod and Embrick 2013). The racialization of religion, thus, results in the conflation of race and religion such that religion is seen as an immutable, essential, and ultimately “unmeltable” or unassimilable (Joshi 2006) aspect of identity, rather than defined as a system of chosen beliefs. This results in the “inheritability of Islam [becoming] the defining criterion” (Bayoumi 2006:278) of Muslim identity. Thus, visible archetypes become attached to religious groups such that cultural, national, ethnic, and religious differences are transformed into racial differences demarcating Muslims as a race and inscribing on Muslim bodies a particular set of observable and verifiable characteristics not limited to phenotype or skin-color (see also Naber 2008).

As Rana (2007) mentions, “current practices of racial profiling in the War on Terror perpetuate a logic that demands the ability to define what a Muslim looks like from appearance and visual cues” (149—emphasis mine). For example, during an interview with me (Zopf unpublished), Sabrina, a 25 year old second generation Muslim living in the United States, highlights this concern, saying:

I think the biggest problem is if you are a Muslim and you are identified. If you have, especially if you have the scarf on or if you have like a beard or something like that people are automatically threatened by you because they can identify you.

At the institutional level, programs such as the National Security Entry-Exit Registration System (NSEERS), target Muslims on the basis of national origin (and name) rather than religion (Cainkar 2002; Bayoumi 2006). According to Cainkar (2002), NSEERS implements programs requiring “certain non-immigrant aliens to register with the US immigration authorities, be fingerprinted and photographed, respond to questioning and submit to routine reporting” (73).  Those under the NSEERS program must report to INS any changes in address, job, or school, while also being under near constant scrutiny and “surveillance” (Bayoumi 2006).

Despite a long history of Orientalist and Islamophobic prejudice towards Muslims, 9/11 was indeed a turning point in the racialization of Muslims (Naber 2008). Once racialized, Islam inscribes onto “brown” Arab, Middle Eastern, and South Asian bodies an essentialized and homogenized visible archetype of “Muslim” that simultaneously delegitimizes and racializes Islam. This racial construction of Muslims and “Muslim-looking people” (Elver 2012) makes them more vulnerable to state-based, media-based, and interpersonal violence (Chon and Artz 2005; Cainkar 2009). As the attack on Balbir Singh Sodhi, a 49 year old Sikh from India who was shot four days after 9/11, shows, being perceived as Muslim is often enough to make one a target, regardless of one’s actual religious affiliation. After September 11th, 2001, the United States “intensified its targeting of persons perceived to be” Muslim through programs such as NSEERS (Naber 2005:480). As a result, images of Muslims, especially in the media, have almost exclusively focused on terrorism related to Islamic extremism (see Shaheen 2008). Together “anti-Arab racism” (Salaita 2006) and “anti-Muslim prejudice” (Malik 2009) have increased in the United States merging prevailing forms of racism with Orientalism and Islamophobia that have resulted in the racialization of Muslims (Meer and Modood 2009; Garner and Selod 2015) and the social construction of a visible archetype of “Muslim” considered inimical to “American” culture and religion.

Choudhury, Cyra. 2008. “Terrorists & Muslims: The Construction, Performance, and Regulation of Muslim Identities in the Post 9/11 United States.” Rutgers Journal of Law and Religion 11:1-32.

Kobayashi, Audrey and Linda Peak. 2000. “Racism out of Place: Thoughts on Whiteness and an Antiracist Geography in the New Millennium.” Annals of the Association of American Geographers 90(2):392-403.

Naber, Nadine. 2008. “‘Look, Mohammed the Terrorist is Coming!’: Cultural Racism, Nation-Based Racism, and Intersectionality of Oppressions after 9/11.” Pp. 276-304 in Race and Arab Americans Before and After 9/11:From Invisible Citizens to Visible Subjects, edited by A. Jamal and N. Naber.  Syracuse. NY: Syracuse University Press.

Pew Research Center for the People and the Press. 2011. “Muslim Americans: No Signs of Growth in Alienation or Support for Extremism.” August. http://www.people-press.org/2011/08/30/muslim-americans-no-signs-of-growth-in-alienation-or-support-for-extremism/

Pew Research Center for the People and the Press. 2013. “After Boston, Little Change in Views of Islam and Violence.” May. http://www.people-press.org/2013/05/07/after-boston-little-change-in-views-of-islam-and-violence/

God and the Revolution: Christianity, the South, and the Communist Party of the USA
The Un/Incorporated, Continental, Overseas, Global States of America: The Grammar of Jurisdictional ...
The Indentured Atlantic: Bound Servitude and the Literature of American Colonization (Part Two)
The Stettheimer Dollhouse: A Life and Salon in Miniature
American Studies in Europe: Interview with Zuzanna Ładyga, University of Warsaw, Poland
“Vaudeville Indians” on the British Stage (British Library)
‘Can the Subaltern Play?’ Jazz as Voice in Boston, Massachusetts circa 1910 – 1949
Veiled Interpretations of Du Bois’s 'The Souls of Black Folk' (1903)