Timothy Stewart-Winter’s Queer Clout: Chicago and the Rise of Gay Politics traces the history of the gay rights movement in the ‘Windy City’. Beginning in the post-war years, it provides a chronological account of decades of gays and lesbians fighting against police brutality, workplace discrimination, or AIDS, and for political representation up until the 1990s – all along following a red thread of the titular ‘clout’ and how it w 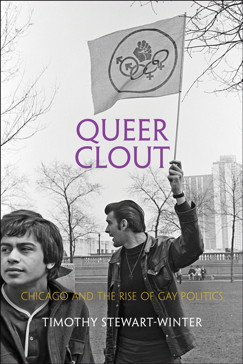 This title rather fittingly was inspired by a line in Tony Kushner’s Angels in America, spoken by none other than Roy Cohn (cf. p.10), and thus gives clues to the importance of this book for American post-war history. It will be of interest to historians, political scientists, and thanks to its accessible and clear-cut prose, should also find a non-academic audience, appealing to everyone interested in queer history, history of sexuality, the Civil Rights struggle and American social movements in general. It is part of a (long overdue) wave of LGBT+ history in academia in recent years, aligning with other regional or urban histories such as Julio Capo Jr.’s Welcome to Fairyland (The University of North Carolina Press 2017), Jaime Harker’s The Lesbian South (The University of North Carolina Press 2018), or Howard Philip Smith and Frank Perez’s Southern Decadence in New Orleans (Louisiana State University Press 2018).

Stewart-Winter makes two powerful cases in telling this story: he outlines the ties between the queer and African American communities in the struggle, and highlights the importance of local over federal politics. He begins by positioning gay migration in the larger context of white flight to suburbia and the often-cited ‘plight of the cities,’ making clear all the more how the erasure of queer lives in the historiography of this era has left missing an important puzzle piece for understanding it. ‘“We came not because it is so great here, but because it was so bad there,”’ (p.1) echo gay rights advocate Carl Wittman’s words from the first page and remain an undercurrent throughout the book, with the chapter on AIDS unsurprisingly packing the most gut punches. Stewart-Winter advocates for paying closer attention to local and state politics when studying social movements, and gives a wealth and breadth of previously undocumented information. The focus on Chicago over the better-known stories of New York and San Francisco’s roles in the gay rights movement is a rewarding choice for this, particularly because it allows for an intersectional approach, addressing not only issues of sexuality, but also race and class, particularly for black lesbians and gays.

The book thus delves deep into the complicated relationship between Chicago’s queer and African American communities in fighting for political clout and representation, marked by the racial segregation of the city’s neighbourhoods. As early gay rights advocacy was mostly centred around counteracting both overpolicing (such as bar raids) and underpolicing (such as ignoring hate crimes) of both Black and gay neighbourhoods (even self-identified as ‘ghettos’ cf. chapter 4), goals between the two groups aligned, and also did so during the AIDS crisis – yet they were equally fraught by the lack of acknowledgement of the existence of queer people of colour. Stewart-Winter makes a powerful argument about the double-marginalization of the group, particularly in his chapter on lesbian activism, where he gives voice to Margaret, a black lesbian airing her issues with her white peers: ‘I can’t call you my sister until you stop participating in my oppression’ (p.142). The author also makes careful distinctions between white gay men and lesbians’ goals that, mildly put, also did not always align – and famously resulted in splintering driven by a second-wave feminism that was often averse to men, but also women of colour.

His story however sadly largely remains one of gay men and lesbian women rather than the full spectrum of the LGBT+ umbrella, yet this is a shortcoming owed to the invisibility of other groups in political advocacy of the time frame he writes about, and the resulting archival situation, rather than a deliberate omission. Another criticism (albeit admittedly a personal gripe of this reviewer with newer historiography in general) is that his accounts of the movement are illustrated in detail for the years between the 1950s and 1980s, but taper off as soon as he reaches the 1990s, leaving the last chapter slightly uneven as it tries to provide a brief summary of events up until the Obama presidency.

Yet, despite these shortcomings, Queer Clout still remains a powerful account of gay post-war history in Chicago, shining a light on local politics, but also embedding it in a larger, more well-known story of the gay rights movement. Cameos by familiar figures like Harvey Milk or Anita Bryant, or the mention of the Kinsey reports and the Stonewall riots help situate the events the author describes within a larger framework – that interested readers can find outlined in Eric Marcus’ Making Gay History (Harper Collins, 2002), Vicky L. Eaklor’s Queer America (The New Press, 2008) or more recently, Michael Bronski’s A Queer History of the United States (Beacon Press, 2011). Stewart-Winter however zooms in on actors and events historians have previously neglected and thus adds an important chapter to American-post-war history that should not be missing in anyone’s accounts of the era any longer.

Dr. Sabrina Mittermeier is a postdoc in American cultural history at the University of Kassel, Germany and author of A Cultural History of Disneyland Theme Parks (Intellect 2021), as well as the (co-)editor of Fighting for the Future: Essays on Star Trek: Discovery (Liverpool UP 2020), the forthcoming Fan Phenomena: Disney (Intellect 2022) and The Routledge Handbook to Star Trek (2022) Her second book project deals with “unmade” queer television in the US and Germany. She can be found as @S_Mittermeier on Twitter.
View all posts by Sabrina Mittermeier →
Tagged  C20, C21, Government, Health.
Bookmark the permalink.