Prince, Seventh-Day Adventism and the Apocalyptic Threat of the 1980s

Throughout June 2016,  U.S. Studies Online will be publishing a series of posts to mark African American Music Appreciation Month. In the third post, Jonathan Downing examines the Adventist messages within Prince’s most commercially successful music.

In the light of his recent death, it is important to note how Prince’s music contributed to public discourse about religious norms and eschatological hopes. Prince’s most successful period as a recording artist came during the 1980s, and his lyrics throughout this decade reflect a contemporary escalation in discussions of the apocalyptic. Events such as the AIDS crisis (“in France a skinny man died of a big disease with a little name”), the Challenger Space Shuttle disaster (“It’s silly no?/ when a rocket ship explodes/ and everybody still wants to fly?”), and the ever-present threat of nuclear war (“Baby make a speech, Star Wars Fly/ Neighbours just shine it on/ But if a night falls and a bomb falls/ Will anyone see the dawn?”) are interpreted by Prince as “Signs of the Times”.[1] Prince’s responses to contemporary political instability can be better understood if we consider his music in the context of his upbringing in the Seventh-Day Adventist Church. Growing up in Minneapolis, a considerable part of Prince’s childhood was spent at the Glendale Seventh-Day Adventist Church. As Touré observes, Prince’s music is deeply imbued with Adventist themes and ideas, particularly in his emphasis on the world’s imminent end signified by growing social unrest, Christ’s second coming, and what this means for the modern individual.[2] 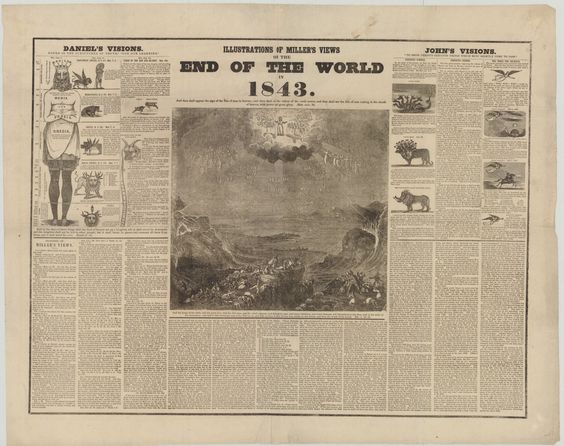 Illustrations of William Miller’s prediction of the End of the world in 1843. Credit: Albert and Shirley Small Special Collections Library, University of Virginia.

Seventh-Day Adventism has its roots in an event known as the ‘Great Disappointment’, when William Miller – a New England farmer – saw his prediction of Christ’s dramatic second coming on 22 October 1844 end in failure. As Malcolm Bull and Keith Lockhart outline, the Seventh-Day Adventist Church that grew out of this failed eschatological speculation affirmed the promise of Christ’s cataclysmic return, by focusing their apologetic efforts on why it had been so unexpectedly delayed. The resultant theological outlook is one which eagerly anticipates a cataclysmic End:

[…] while the end of the world is, for most non-Adventists, an external event to break unexpectedly into their lives, for Adventists it is […] an occurrence integral to the progress of the Church. Other people endure the Second Advent only long enough to register surprise and horror that it is taking place. They experience the event only as an ending. But for Adventists, it is also a new beginning as they leave the earth to enter the divine realm.[3]

Seventh-Day Adventism also promotes a mythological reading of world history, seeing historical events as part of an unfolding struggle between Christ and Satan. The idea of the ‘great controversy’ runs through five influential books written by the Adventist prophet Ellen Gould White in the late nineteenth century. White imaginatively re-examines and interprets human history through the lens of this pervasive conflict, arguing that key moments in history reflect turning points in, “[t]he great controversy between truth and error, between Christ and Satan.” [4] White’s writings make clear that this conflict is entering its final stages, as, “[t]he great controversy between Christ and Satan, that has been carried forward for nearly six thousand years, is soon to close; and the wicked one redoubles his efforts to defeat the work of Christ on man’s behalf.” [5] 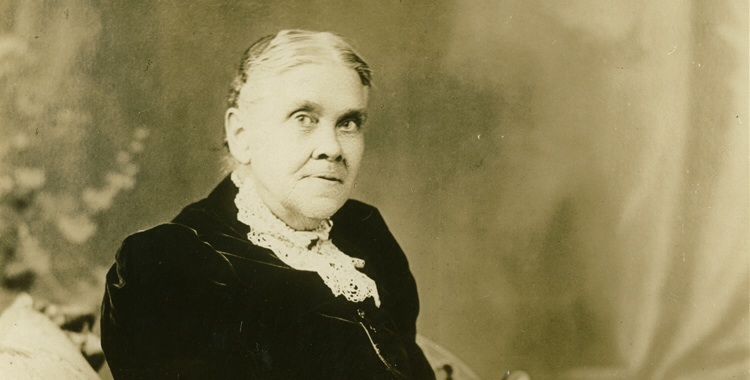 Prior to his conversion to the Jehovah’s Witness faith in 1997, Prince’s works frequently echoed and alluded to Seventh-Day Adventist texts and ideas. “1999” (released in 1983, reaching number 4 on the US Billboard Hot 100) opens with the narrator waking up on “Judgment Day”. The threat of “destruction” is met, however, with apathy: “you know I didn’t even care.” The song continues by highlighting the tense geo-political stand-off between the USA and the USSR, and the impending threat of nuclear war: “Everybody’s got a bomb we could all die any day/ So before I let that happen, I’ll dance my life away.” The response to apocalypse offered in “1999” is to welcome the End, and indeed to greet it with rapture. However, something more than nihilistic hedonism is at play here. Rather, “1999” reflects a distinctly Adventist world-view, whereby the ‘End’ of history is viewed as a hopeful promise rather than an existential threat.

This eschatological intervention is given an explicitly Christological focus in Prince’s work, as references to the hope for a Second Advent abound in his music. “Let’s Go Crazy”, the opening track from the record-breaking Purple Rain album (1984), narrates the individual’s struggle with “de-elevator” (a pseudonym for Satan [6]) in the face of imminent death (“maybe it’s ‘cos/we’re all gonna die”). It culminates in the orgiastic expectation of Christ’s return: “He’s comin’, comin’, comin… Take me away!” (the euphemistic potential of the verb “to come” is exploited fully here). One of the most sexually explicit songs in Prince’s back catalogue, “Darling Nikki,” ends with a spoken-word outro, where Prince recites backwards, using a reverse tape effect, “Hello, how are you? I am fine, ‘cos I know that the Lord is coming soon, coming, coming soon.” The anticipated return of Jesus – the cornerstone of Adventist redemptive hope – is consistently affirmed by Prince and the expectation is eroticised through his use of innuendo and juxtaposition with sexually-charged lyrics.[7]

References to the Second Advent are evident in Prince and the Revolution’s “Let’s Go Crazy” (1984) (pictured left).  Divine and Satanic conflict is significantly present in Prince’s Lovesexy album and tour (1988) (pictured right).

The individual is not, however, powerless in the face of inevitable apocalypse. Prince’s music explores how the individual’s choices and actions become an important battle ground in the intensifying conflict between the divine and satanic forces envisaged in White’s ideas about the ‘great controversy’. This is most clearly evidenced on 1988’s Lovesexy album and tour. Throughout, there is a battle between Christ (rechristened “Lovesexy”) and Satan (renamed “Spooky Electric”). Prince urges his listeners to declare their faith in the former, and to reject the snares of the latter. “Lovesexy” offers life-affirming divine love (which, characteristically, leads to pleasurable sexual encounters); Spooky Electric, by contrast, is the voice of the devil who “talks so loud” (“Eye No”), “tries 2 get in U” and carries out violent acts of murder: “He’s got a 57. Mag with the price tag still on the side” (“Positivity”). Escalating gun violence, street crime, and drug use are all interpreted as signs of growing Satanic influence. Prince pleads with his listeners, “don’t kiss the Beast, be superior at least”, invoking the vision of the seductive beast deceiving Earth’s population in Revelation 13. [8] In the light of Christ’s impending return, Prince takes the opportunity to urge his listeners to pick the correct side in this ‘great controversy’.

Prince’s prolific musical outlook articulates an Adventist perspective on the perceived geo-political, environmental, and epidemiological turbulence of the 1980s. Seen against the Adventist eschatological framework that Prince was raised in, the emphasis in his lyrics on the imminent return of Christ cohere well with key tenets of the Seventh-Day Adventist hope for redemption. Prince’s theological innovation, in this context, is to eroticise this hope, presenting Christ’s return as a cathartic sexual climax, against growing misery and uncertainty in the contemporary world.

[1] The single “Sign ☮’ The Times” was released in 1987, reaching number 3 on the Billboard Hot 100 chart. It is noteworthy that the title of this track is a modification of “Signs of the Times”, a prominent Seventh-Day Adventist Periodical, published monthly from 1874 to the present day.

[7] A number of commentators have observed that Prince plays with messianic tropes throughout the Purple Rain album, with tracks such as “Baby I’m a Star”, “I Would Die 4 U” and “Purple Rain” itself depicting Prince himself in quasi-messianic terms. See especially Touré, I Would Die 4 U, 114-7; Dave Hill, Prince: A Pop Life (London and Boston: Faber & Faber, 1989), 157-8; and on religious tropes in Prince’s stagecraft see Stan Hawkins and Sarah Niblock, Prince: the Making of a Pop Music Phenomenon (Farnham, Surrey: Ashgate, 2011), 55-74.

[8] “And I beheld another beast coming up out of the earth; and he had two horns like a lamb, and he spake as a dragon. And he exerciseth all the power of the first beast before him, and causeth the earth and them which dwell therein to worship the first beast, whose deadly wound was healed […] And decieveth them that dwell on the earth by the means of those miracles which he had power to do in the sight of the beast” Revelation 13:11-14, King James Version.

60 Seconds With Collin Lieberg
Broadway, Hollywood, and the Problem with The Prom
Sea Birds, Castaways, and Phantom Islands off Newfoundland
Music and Social Movements
R&B entertainers didn't take too long to get involved in the civil rights movement
Social Disorder: Publics, 1968, Amateur photography and Vivian Maier
Shadows in History: Religious and Intellectual History in Higher Education
What is, and how to do, LGBT History?

Jonathan Downing is a Postdoctoral Research Associate in the Department of Historical Studies at the University of Bristol. His research interests include 19th century prophetic religious movements, the use of the Bible in modern sectarian religions, and religious motifs in popular music.
View all posts by Jonathan Downing →
Tagged  African American Culture, Black History, C20, C21, Gender and Sexuality, Popular Culture, Prince, Religion.
Bookmark the permalink.