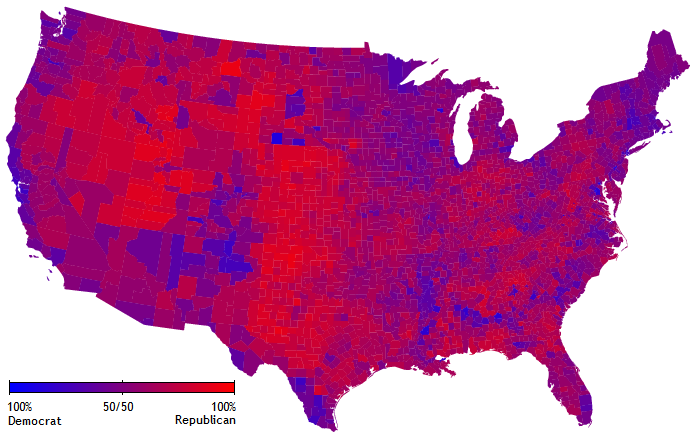 “File:2004 US elections purple counties.png” by Mark Newman, Department of Physics and Center for the Study of Complex Systems, University of Michigan Email: mejn@umich.edu is licensed under CC BY 2.0

‘The reality of recent United States presidential elections is that there are only about ten states which are the object of attention for candidates and campaigns,’ Stacey Hunter Hecht and David Schultz wrote in 2015.[i] In the five presidential elections between 2000 and 2016, thirty-eight of the fifty American states voted for the same political party.[ii] Many of the twelve outlying states that have not voted consistently—often labeled as swing states—have taken on disproportionate importance in national elections, drawing candidates’ time, money and attention. Since the nineteenth century, the Midwest, historically home to many of the nation’s swing states, has been the most frequently visited region by presidential candidates. Yet while Vigo County, Indiana is the only county in the nation that has voted for the winner of the presidential race in every election since 1956, Indiana is not on the list of Midwestern battleground states. Instead, Indiana is in the majority of states that, in presidential elections, find themselves relegated to the background. In an election cycle when campaigning has become more complicated and the Electoral College system that favours swing states has come under attack, what can we learn about the value of campaigning in those states, such as Indiana, which are not strongly contested by presidential candidates?

The Electoral College awards a specific number of electoral votes, determined by population, to the presidential candidate who wins each state. With the exceptions of Nebraska and Maine, all of a state’s electoral votes are awarded to the candidate who has won the most popular votes in the state. This system puts decisive importance on the result of state elections over the result of the national popular vote giving certain individual states the power to shift or tip election results. In the years between the Civil War and WWI, Indiana had this type of electoral power and was considered a swing state. During this era of Indiana politics, the state, which had fifteen electoral votes and a politically divided population, did not consistently vote for either political party, allowing it to have an outsized influence on national political outcomes. In the 1880 presidential election—which was, and still remains, the closest in history in terms of the popular vote—Indiana went to Republican James Garfield, who defeated Democrat Winfield Scott Hancock by a margin of fifty-nine electoral votes and fewer than 10,000 popular votes. Four years later, the electoral vote was even closer, with Democrat Grover Cleveland defeating Republican James Blaine by a higher number of popular votes at 23,000, but fewer electoral votes, with thirty-seven—of which Indiana’s fifteen electoral votes made up 40%. In 1888, these fifteen electoral votes went back to the Republicans, when Republican Benjamin Harrison defeated incumbent Cleveland by sixty-five Electoral College votes while receiving almost 100,500 fewer total votes—only the third time in history a candidate had won the presidency without winning the popular vote.

In 2016, when a candidate won the presidency without winning the popular vote for the fifth time, the Midwest again played a pivotal role in delivering Donald Trump’s surprise victory. While Hillary Clinton received almost as many popular votes as Barack Obama had in 2012, she received 105 fewer electoral votes, leaving her far short of the 270 necessary to win the presidency. In the aftermath of this result each candidate’s campaign strategy took on renewed scrutiny and Clinton’s ground campaign, which had, in the run-up to the election, been praised as better staffed, better funded, and better organized than Trump’s, was criticized for ignoring states—many in the Midwest, such as Wisconsin, where Clinton made no campaign appearances after the convention—that ended up tipping the balance of the election.

To what extent each candidate’s campaign strategy was responsible for the Electoral College outcome, particularly in the Midwest, is debatable. Depressed Democratic voter turnout suggests that Clinton’s campaign failed to connect with key members of the Democratic base, which could be attributed to misdirected campaigning.[iii] Political commentator Nate Silver, however, argues that demographics, rather than campaign strategies, might be responsible for Clinton’s surprising losses in the Midwest: while Clinton made no campaign appearances in Wisconsin and Trump did, both candidates campaigned heavily and fairly equally in Pennsylvania, yet both states voted for Trump by similar margins, a result Silver argues can be credited to the two states’ similar demographics, rather than campaign attention.[iv]

Yet Indiana’s recent voting history suggests that candidates’ campaigning can make a difference in election results. Since the mid-twentieth century, Indiana has been widely considered a Republican stronghold. The state is home to Mike Pence, the current Republican vice president, and during the 2016 election, Clinton won only four out of Indiana’s ninety-two counties. The 2020 election is predicted to be no different: In a 17 September-14 October poll, Trump was leading Biden in the state by eight percentage points.[v]

But despite this conservative reputation, Indiana has actually voted for a Democratic presidential candidate as recently as twelve years ago, when Barack Obama pulled off an unexpected victory by winning Indiana in the 2008 general election. Obama won over John McCain in the state by only 1.03%—the third closest result in the 2008 race—and his decisive overall victory rendered his win in Indiana marginal. Yet Obama’s victory in the state demonstrated that the political landscape in Indiana is not as clear-cut as the state’s conservative track record might suggest, and signaled the power of campaigning even in a state that, based on demographics alone, should lean towards one political party. While Clinton largely passed the state by in the 2016 election, when two thirds of campaign events took place in only six states, the Obama campaign had spent time in Indiana before the 2008 election, even though he was not forecasted to carry the state.[vi] In 2016, Indiana received just two campaign visits, both from the Trump campaign; before the 2008 election, the Obama campaign made forty-eight appearances in Indiana to John McCain’s two. In 2012, when the Obama campaign spent considerably less time in Indiana, the state was one of four that election cycle to hit an all-time low for Democratic turnout. [vii]

As in the 2016 election, other factors certainly contributed to Obama’s 2008 success in Indiana. His 2008 campaign drew high levels of support and voter turnout from urban and minority voters nationally and he was securely ahead in the polls throughout the general election, giving his campaign the freedom to focus time and attention on a wide range of states. Yet Obama’s historic success in winning over voters in a state that had not voted for a Democratic candidate since 1964 demonstrated that his campaign strategy of going to as many states as possible could pay off in unlikely places, and gave credence to the importance of active campaigning in driving voter turnout, particularly in the Democratic base.

In 2020, an election cycle upended by the Covid-19 pandemic, candidates’ campaign strategies are under intense scrutiny. Citing health warnings and travel restrictions, Joe Biden has had a significantly reduced travel schedule for much of the general election: In the forty-five days between his 11 August announcement of Kamala Harris as his running mate and 25 September, Biden left his home state of Delaware only twelve times and there were twenty-two days on which he either did not make a public appearance or only held a virtual fundraising event. Trump, meanwhile, has maintained a more typical campaign schedule, making twenty-four trips to seventeen states in that same forty-five day stretch.[viii] At the same time, however, the Trump campaign has severely cut or completely withdrawn campaign advertising in battleground Midwestern states such as Michigan, Wisconsin, and Minnesota. Although the Trump campaign is portraying this Midwestern retreat as a sign of Trump’s strength in the region, the campaign’s recent budgetary concerns suggest that the move is more likely an effort to consolidate funding in states such as Arizona, where the campaign sees more potential.[ix] In an election that is predicted to have the highest voter turnout in history, it will be interesting to see how these campaign decisions affect each candidate’s results in the nation’s swing states, as well as in the states that are often passed over during election season.

[ii] Jessica Pearce Rotondi, ‘What Are Swing States and Why Are They Critical in US Elections?’ (7 October 2020) <https://www.history.com/news/swing-states-presidential-elections> (Accessed 10 October 2020).

[vi] Robert Alexander, ‘The battle to be the president of the swing states of America’ (14 October 2020) <https://edition.cnn.com/2020/10/14/opinions/president-swing-states-of-america-opinion-alexander/index.html> (Accessed 15 October 2020)

Molly Becker is a third-year PhD student at the University of Cambridge. She received a BA in English Literature, Linguistics, and Geography from the University of Chicago in 2017, and went on to receive an MPhil in American Literature at Cambridge the following year. Her PhD dissertation examines the relationship between the rural Midwest, language, and American culture and identity in the early twentieth century through the lens of Midwestern authors such as Ruth Suckow, Zona Gale, and Booth Tarkington.
View all posts by Molly Becker →
Tagged  Election Series 2020, Politics.
Bookmark the permalink.