Playing Paranoid in The Lighthouse 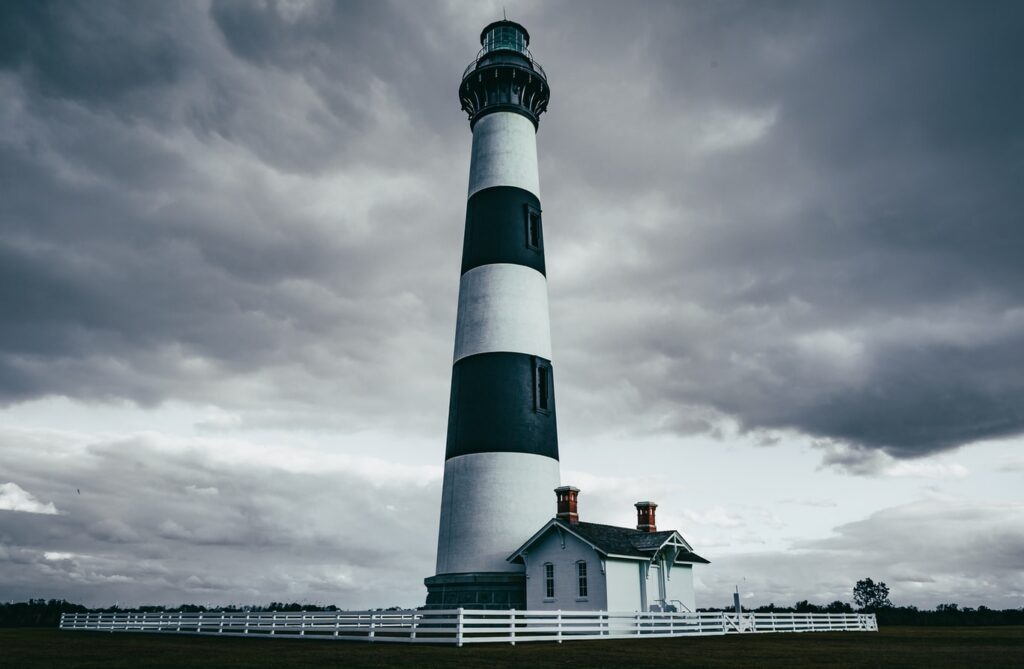 If the 2000s were infested with zombie horror and alien invasions, what can we make of the recent resurgence of Lovecraftian tentacled monsters in film and television? In a blog post from October 2016, Roger Luckhurst traces the re-emergence of Lovecraftian themes to Netflix’s Stranger Things, arguing that the series conjures a ‘sense that humans have irreversibly broken the planet, and that Nature is coming back to exact a terrible revenge’.[i] Writing on the eve of Trump’s election, Luckhurst’s diagnosis seems at once prescient and premature: the years that followed would see more popular re-imaginings of the Lovecraft mythos such as Color out of Space (2019) and Lovecraft Country (2020). Yet in retrospect, such narratives seem to align less with impending climate disaster than they do with Trump’s election and presidency. These re-imaginings of Lovecraftian horror generate diverse responses to the Trumpian age; indeed the ‘Cthulhu for President’ parody’s 2016 campaign seemed particularly, unnervingly apt.[ii]

Robert Eggers’ 2019 film, The Lighthouse, makes playful use of Lovecraftian themes.[iii] Set on an island off New England in the 1890s, this psychological horror depicts two lighthouse keepers and their surly, delirious relationship as they see out their days drinking, bonding, spatting and tending to the light. Saturated in gristly Melvillian dialogue, The Lighthouse revels in homage to nineteenth century fiction, shanty and folklore. It is also strikingly Lovecraftian: the younger Ephraim (Robert Pattinson) is haunted by a mysterious past, taunted by visions of a tentacled monster and is finally driven to madness when he kills the older Tom (Willem Dafoe) and confronts the horror contained in the lighthouse’s dazzling glare. With its constant suggestive threat of something lurking beneath, The Lighthouse responds to the Trump era through the paranoia of Lovecraftian imagery. However, it simultaneously finds humour in the paranoid position: as I argue, the film’s parodic composition empties its fraught imagery of meaning, dispels the paranoid gaze and foregrounds a farcical drama of white masculinity.

In his discussion of late twentieth-century action film narratives, Fradley identifies a strain of ‘white male paranoia’ combined with a discourse of ‘male crisis’ which gained critical attention during the 1990s.[iv] For Fradley, ‘paranoid spectacle’ frames white masculinity as the victim of progressive social change:

The male paranoiac is a reader of signs, and his paranoia functions both to make sense of the world and as an ever-vigilant border patrol, forever placing his own tenuous, fragile masculine identity at the centre of a beleaguered narrative of suffering, victimisation and white plight.[v]

Fradley’s analysis seems just as pertinent for a presidency built on allegations of personal victimhood at the hands of supposedly corrupt establishment politicians and media. While not universally representative of Trump’s voter base, the success of ‘Make America Great Again’ lay in its implicit image of a victimised white male – an identity to which the president himself laid the greatest claim.

H.P. Lovecraft shared similar paranoid tendencies with Trump. He spent his life wracked by fear – of illness, intimacy, the Other – which echoes throughout his work, particularly its embedded racism. Lovecraft’s stories are dominated by the spectre of an unknowable, maddening horror – often embodied in his tentacled god, Cthulhu, which slips in and out of his narratives, revealing a fleeting silhouette or flash of a tentacle before receding into the shadows.[vi] Not unlike Cthulhu, the paranoia permeating Donald Trump’s campaigns is slippery and nebulous, targeting a perceived threat which shapeshifts from immigrants, to establishment media, to election meddling. Liberal reactions to Trump’s election were not without their own objects of paranoia. Fingers pointed at supposed Russian meddling and Steve Bannon even emerged in the liberal imaginary as a Cthulhu-like figure, overseeing a subterranean army of semi-human edgelords memeing Trump to victory. From multiple perspectives, we can consider the Trump age a paranoid time – one that lends itself to narrative styled on Lovecraftian lore.

The Lighthouse’s Lovecraftian themes doubly capture and make fun of this sense of all-consuming paranoia. Ephraim’s tentacled visions catch the viewer’s attention momentarily; we first glimpse the monster when Ephraim tries to discover the secret of the lighthouse’s lamp, which Thomas has been guarding territorially (‘It’s mine! Mine!’ he barks, like a jealous lover). As Thomas climbs to the top, a winding limb slides across the screen, quickly obscured by the lamp’s kaleidoscopic glare. Never fully revealed to the viewer, quick shots such as these invite a paranoid gaze: like Ephraim, we are convinced of something  – perhaps horrifying, certainly meaningful – behind the light.

However, while a sense of dread may underpin the narrative, the film undoes whatever meaning we seek to uncover in this paranoia’s object. The dialogue and mise-en-scene are full of excessive literary and folkloric references, woven into the film’s ominous black-and-white visuals and ‘old-time’ feeling afforded by the boxy 1.19 ratio. The composition of images dares us both to invest in the conspiracy and to scoff at its artistic pretensions. In one of Ephraim’s dreams, for example, he stares horrified at a naked Thomas towering over him, statuesque, with eyes like the lighthouse beam penetrating his soul. The camera rests on this image, pinning the two motionless figures as if captured in a painting. 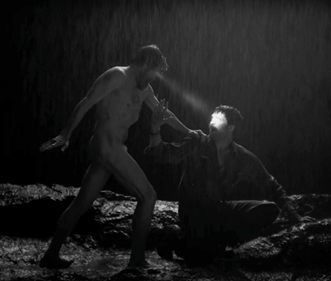 The image echoes Sascha Schneider’s 1904 painting Hypnosis and the Artemision Bronze enough to invite countless readings. Yet the camera lingers a little too long, and the figures are a little too gauche, to be taken seriously from a director whose previous dealings in paranoia generate horror through subtle, mounting tension (The Witch, 2016).  In The Lighthouse, the playful insistence on this image goads our paranoid gaze to search for meaning where, ultimately, there isn’t one. Exemplified here, the film is loaded with allusions to the point of saturation, rendering its imagery meaningless and empty.

Suffusing The Lighthouse’s allusions and art-house posturing is a parody of white masculinity. This is neither hidden nor subtle; as Eggers mentioned in an interview, ‘nothing good happens when two men are trapped in a giant phallus’.[vii] Phallic imagery is everywhere in the film, accompanied by regular leakages and spurts of foam from the waves. Further, the two characters are exaggeratedly male: Ephraim masturbates furiously, Thomas farts relentlessly, they drink and dance and embrace in a manic circus teetering on the brink of homosocial and homoerotic. Ephraim berates Thomas as a ‘parody’ of a sea dog – never mind that earlier on Ephraim himself, a former lumberjack, proclaims ‘If I had a steak, I’d fuck it’. If we read The Lighthouse as a response to Trumpian discourse, the film’s excessive masculine performances mock the self-seriousness of the Trumpian construction of a victimised white masculine identity. Indeed it is this carnivalesque drama of masculinity which dispels our paranoid gaze: in the film’s conclusion, Ephraim and Thomas meet their ends only at the hands of each other.

In many ways, then, The Lighthouse repurposes Fradley’s ‘paranoid spectacle’ of white masculinity for Trumpian times. Capturing the paranoiac culture of the Trump administration, the film’s allusions to Cthulhu invite the viewer to adopt a paranoid position and search for meaning in vain. Through this empty imagery, a paranoid tale of madness and desire disintegrates into a farce of white masculinity: a fitting response to the Trumpian culture of paranoia, which finds its apogee in the former president’s self-modelled figure of the victimised white male.

Conference Review: 'Supposedly Fun Things: A Colloquium on the Writing of David Foster Wallace’
My Research across Borders: Lonneke Geerlings
Not Your Grandparents’ Grand Strategy: Rethinking Liberal Hegemony
The Death Dance: the Pickwick Club Disaster in Boston, 1925
When a novel changes a social system: Mary Jane Ward’s The Snake Pit (1946) and the US state psychia...
Review: 'The (Re)production of Misery and the Ways of Resistance' American Studies Association Confe...
Conference Review: ‘The Return of the Aesthetic in American Studies’, Goethe-Universität Frankfurt, ...
The United States Christian Commission and the Civil War Dead

Sarah Collier is a PhD candidate in English Literature at UCL. Her research explores representations of military masculinities in contemporary American war narratives.
View all posts by Sarah Collier →
Tagged  Hollywood in the Age of Trump, Lovecraft.
Bookmark the permalink.