The conference for the 2021 British Association for American Studies was held entirely online this year in response to the global pandemic of Covid-19 and as a way to hold an almost carbon neutral conference in response to growing concerns around climate change. Indeed, the first session of the conference titled Lights, Camera, Crash: Finance and Contemporary Genre Film chaired by Dr. Cara Rodway (Deputy Head of the Eccles Centre at The British Library), thematically revolved around another global catastrophe: the financial crisis of 2008, when American stock market crashes created a wave of financial uncertainty for many across America and the world. The financial crash began with the accumulation of risky housing mortgages by investment insurance institutions, pension funds and insurance companies. Housing values plummeted dramatically as homeowners defaulted on their mortgages and investment banks were stuck with worthless investments and mounting debt. The entire financial stream froze, causing major institutions to declare bankruptcy. Famously, the Lehman Brothers, an investment banking goliath, filed for bankruptcy on September 15th, 2008, and the global markets immediately plummeted.

Many regard the cause of the crash and the subsequent bank bail-outs by the government to be symptoms of corporate greed, governmental deregulation and elitist self-interest; the pillars of the neoliberal society. The themes of the conference session reflected this as allegory of the financialisation of society at large and the social, political and economic implications of the crash were common links through the panels. Beginning with a focus on the political landscape around financial capitalism, Dr. Thomas Cobbs (Coventry University) began the presentations withExploring the 1981 of Joker – allegory of Reaganite original sin. Through the film Joker (2019), Cobbs linked the neoliberal policies of the Ronald Reagan presidency (1981-1989), when the film is set, and the populism of the Donald Trump presidency (2017-2021), in which the film was made. Cobbs argues that the film presented a causative lineage, arguing that there is no Trump without Reagan.[1]

Cobbs’ analysis begins with the opening scene of Joker where Fleck, the future Joker, is donning clown make up for a job whilst a news report on the radio states there have been ongoing protests and strikes.[2] By placing economic discontent at the fore, the film allegorises Reaganite neoliberalism, a political environment which allows discontent of the masses to pave the way for Trumpist populism. We see this later in the film, as Fleck, inspired by violence done to him by an uncaring neoliberal society, becomes an anarchist leader through violence, culminating in shocking acts such as shooting a celebrity on camera. Cobbs links such violence to Trump’s proclamation that he ‘could stand in the middle of 5th Avenue and shoot somebody, and […] wouldn’t lose any voters’. That both Trump and Fleck gain large followings through such violence (metaphorical and literal) illustrates the way that populist leaders polarise and radicalise political landscapes. 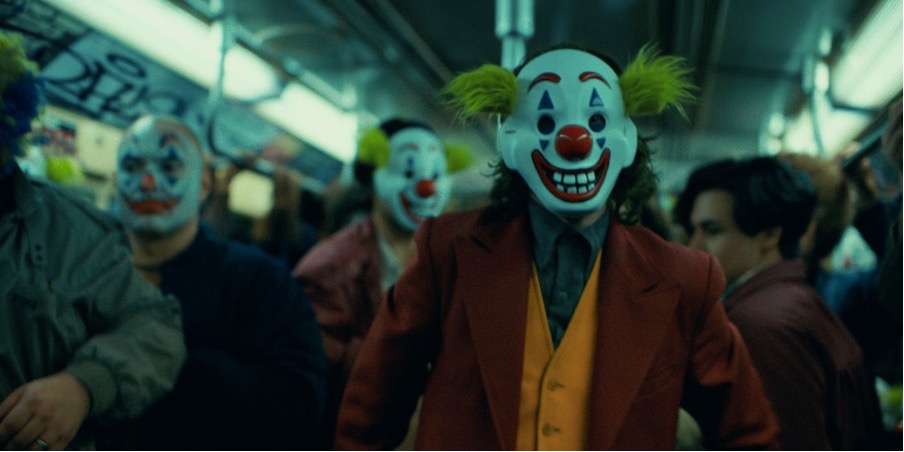 Though the film ends with Fleck in prison, he laughs at the state’s attempt to stifle what he has begun, which illustrates how Trumpist politics won’t end with Trump’s presidency. Overall, the violence of Reagan’s neoliberalism and the violence of the Wall Street crash give birth to the violence of populism, each moment in turn creating lineage towards the next.

The ways that financial and political systems affect the wider public was the main theme of the day, first set by Cobb’s presentation and continued by Dr. Amy Bride (University of Manchester) who presented ‘The Matrix is a system, Neo. That system is our enemy’: Financial Disconnection and Market Metaphor in The Matrix Trilogy. Her presentation would argue that one could replace the word ‘Matrix’ in the title quote with the word ‘market’ to reveal how the two words are interchangeable. In our real world, Bride argues, we already live in a matrix, we merely call it the market, calling attention to the unreality of the market as a place of symbolic capital exchange.

Figure 2 The incubated humans in The Matrix (1999)

The Matrix (1999-2003) presents us with an allegory of marketplace capitalism as the matrix is revealed to be machines which feed on farmed bodies, extracting their perceived value, thus, alluding to Marxist criticisms of worker’s rights under capitalism. Furthermore, it is revealed that Neo, the central character and prophesized saviour who can defeat the matrix, has been specifically built into the matrix not only to destroy it, but destroy it to ensure that the matrix is reset and renewed, thus, continuing the cycle of domination. Bride compares this to the boom-and-bust cycle of markets, where market crash and collapse is required in order to weed out the weak corporations and stocks, allowing for a ‘stronger comeback with greater profit margins the next time around’.[3] The matrix, or the market, becomes a self-perpetuating cycle which destroys itself by design and is reborn bigger and stronger than ever. The masses are at the mercy of the market, serving a system whose only interest is its own self-perpetuation.

This discussion of what the crash meant for the masses lead neatly to Dr. Edward Jackson’s (University of Birmingham) presentation Disney’s Frozen and the Lehman Sisters Hypothesis, the inclusion of a Disney film being an unexpected yet welcome entry to the panel. The Lehman Sisters hypothesis posits the question: if more women had been in power, could the crashes have been avoided? 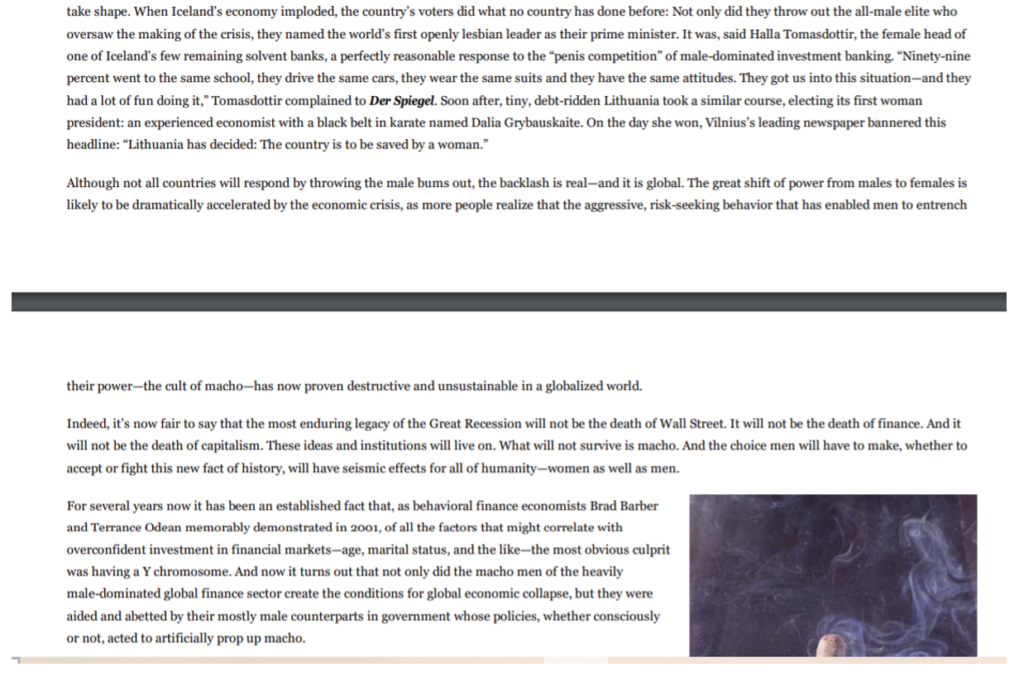 Figure 3 A 2009 article blaming masculinity for the financial crisis. [4]

Jackson argued that such a hypothesis deflected blame away from financial capitalism as a social order and placed it on gender and rampant masculinity. The hypothesis takes for granted that women are naturally moderate whilst men are more daring and reckless, it is a myth that works to reinforce social norms. This same problematic narrative can be found in the Disney film Frozen (2013) which lets financial capitalism roam free in the name of sisterly love. Jackson illustrates how Elsa, Queen of Arendelle plagued with the magical ability to control ice, causes a permanent freeze of the town that leaves her subjects economically worse off and at the mercy of her powers. This accidental freeze can read as an allegory for financial recklessness.[5] In order to achieve harmony in the kingdom, Elsa and her sister Anna must amend their broken relationship and moderate each other’s behaviour. Balance is restored in the kingdom through the sisterly reunion; however, Jackson notes that the subjects of Arendelle are still at the mercy of the ruling elite under the guise of economic egalitarianism. The fantasy of women solving the financial crisis through sisterly love and female moderation is fulfilled, whilst the institutions which caused the crisis are left unchecked and unchallenged.

To conclude the session, the panel opened a question-and-answer discussion to clarify the dominating themes of the discussion, with financial allegory taking centre stage. All three presentations discussed films which allegorised various aspects of post-2008 life: Joker representing the political neoliberal landscape and the descent into Trumpist populism, the Matrix representing the all-powerful markets controlling the masses under capitalist order, and Frozenrepresenting the unwillingness to identify the structures which leave the masses at the mercy of uncontrolled financial forces. What all the presentations do is illustrate the various ways that the crash illuminated how markets work to shape, reinforce and maintain financial capitalism for the benefit of financial elites.

[1] Cobbs began by defining each president’s main polices, Reagan maintaining an anti-government, anti-communist neoliberal stance characterised by championing free market trading and deficit spending. Trump, on the other hand, is identified as a populist for the people, anti-elitist, anti-democracy, a mantra that results from the financial crisis and the bank bailouts that frustrated the nation. [2] Cobbs linked the strikes allegorically to the Winter of Discontent (1978-79) which saw private and public sector trade unions demand pay rises in opposition to the government in the UK, leading to industrial action. [3]  Amy Bride, ‘“The Matrix is a system, Neo. That system is our enemy”: Financial Disconnection and Market Metaphor in The Matrix Trilogy’, BAAS 2021 Digital Conference, (2021). [4] Reihan Salam, ‘The Death of Macho: The Era of Male Dominance is Over’, Foreign Policy, (2009). [5] The image of literally freezing a town economically is a financial metaphor not to be overlooked.

[1] Cobbs began by defining each president’s main polices, Reagan maintaining an anti-government, anti-communist neoliberal stance characterised by championing free market trading and deficit spending. Trump, on the other hand, is identified as a populist for the people, anti-elitist, anti-democracy, a mantra that results from the financial crisis and the bank bailouts that frustrated the nation.

[2] Cobbs linked the strikes allegorically to the Winter of Discontent (1978-79) which saw private and public sector trade unions demand pay rises in opposition to the government in the UK, leading to industrial action.

[3] Amy Bride, ‘“The Matrix is a system, Neo. That system is our enemy”: Financial Disconnection and Market Metaphor in The Matrix Trilogy’, BAAS 2021 Digital Conference, (2021).

[5] The image of literally freezing a town economically is a financial metaphor not to be overlooked.

I am a graduate of Edinburgh Napier University, where I received a 1st class BA (Hons) in English Literature and Film. From September 2022 I will be studying for an MA in Digital Culture and Society at King's College London. Since graduating with my BA, I have kept a film and television blog, and won Highly Commended at the Global Undergraduate Awards in 2018. The paper I submitted for that award has now been published, as well as a conference review about New Research on American Literature and Neoliberalism. My research interests involve media, including social media and streaming platforms, and the changing ways this media is consumed, including the implications media has on the wider culture. I am also interested in postmodernity, science fiction, neoliberalism, capitalism, existentialism, and the nature of reality and human subjectivity in an age when "Truth" is constantly being questioned.
View all posts by Megan Kirkwood →
Tagged  BAAS 2021, Conference Review, Event review.
Bookmark the permalink.