David Foster Wallace and a new Writing of Honesty

David Foster Wallace and a new Writing of Honesty

The events that mark the beginning and the end of postmodernism are symmetrical: it starts and ends with the destruction of iconic buildings. Modernism ended with the demolition of the Pruitt-Igoe urban housing project in 1972;[1] and the so-called post-postmodernism started with the terrorist attacks on the Twin Towers.[2] The same architect, Minoru Yamasaki, designed both buildings. Thus, postmodernism, the age of irony, was ironically framed: it started and ended with a bang.[3]

The last bang, however, ended the reign of irony, or so it seemed. The attacks served to awaken the world from the happy, however boring, slumber of the end of history as proclaimed by Francis Fukuyama. Suddenly, earnestness and sincerity seemed to regain their lost prevalence. Although we take 9/11 as the starting point of post-postmodernism, some critics had been announcing the death of postmodernism long before 9/11.[4] Even prominent theorists of the postmodern, like Linda Hutcheon or Ihab Hassan,[5] began to declare the death of postmodernism and many thinkers and artists soon took on the task of defining the new era.[6]

Of course, the fact that the death of postmodernism was marked by 9/11 does not mean that it was in good shape at that point. The debate had been going on for some time. David Foster Wallace was one of the first to notice that there was something wrong with the era of irony, ambiguity and relativity, and to try to overcome the uneasy feelings of existentialism, nihilism and solipsism that it brought about—which had been described by so many postmodern authors of the previous generation. His novel Infinite Jest (1996) is a collection of characters who personify all those uneasy feelings. Through the 1079 pages of the book, they try to find a meaning to their existence. Although the majority of them succeed in their attempt to stay alive, they cannot establish a sincere connection with the people around them. That fuels the uncertainty about their own reality, which makes it very hard for them to find a real difference between existing and not existing. Wallace knew that literature had to move away from irony and postmodern artifice in order to be able to recover a lost referentiality and essentialism. To that end, Wallace made use of honesty and sincerity, which adapt to the ideas of transcendentalism. With Infinite Jest, he created a work of fiction that echoes his own true and honest experience. In the age of irony, the only way to connect was sincerity.[7] In “Octet”, a short story from Brief Interviews with Hideous Men (1999), the narrator of the section “Pop Quiz 9” realizes that the only real way to connect with the reader is “to be 100% honest. Meaning not just sincere but almost naked. Worse than naked—more like unarmed. Defenseless” (131).

Following in Wallace’s footsteps, some American writers started assuming this new role of prophets of referentiality and essentialism by using an updated version of the tenets of the writers and thinkers of the Concord group. Authors like Dave Eggers, Jonathan Safran Foer or Mark Z. Danielewski—to name just a few—followed Wallace’s example and made a thorough use of transcendentalism in their works. As an example to illustrate this, Eggers wanted to move away from postmodern irony and tried to find essentialism through univocity and referentiality. There is an obvious longing for that in passages like this one—taken from his novel You Shall Know Our Velocity (2002)—:

“I wanted synthesis and the plain truth—without the formalities of debate. There was nothing left to debate, no heated discussion that seemed to progress toward any healing solution. I wanted only truth, as simple as you could serve it, straight down the middle, not the product of dialectic but sui generis: Truth! We all knew the truth but we insisted on distorting things to make it seem like we were all, with each other, in such profound disagreement about everything, when of course there were not; there was one side only, one side always: just as this earth is round, the truth is round, not two-sided but round and—.” (27)

The truth has to be round, the character says. The circle is a central element for Ralph Waldo Emerson.[8] He relates it to the idea of God, nature, infinite flux, and he relates it with truth, but the truth found in the soul, bringing the concept closer to the idea of sincerity, of honesty.[9] Eggers wrote a foreword for the 2006 edition of Wallace’s Infinite Jest where he described the author as one of Emerson’s ‘representative men’, a normal person capable of extraordinary feats, the embodiment of the American hero: “[s]o he is normal, and regular, and ordinary, and this is his extraordinary, and irregular, and not normal achievement” (xvi). In 2000 Eggers published a memoir, A Heartbreaking Work of Staggering Genius, were he, like Wallace, made a reconstruction of himself—a normal kid—and gave it away to the readers in order to connect with people and get rid of the uneasy feelings that postmodernism had brought about. 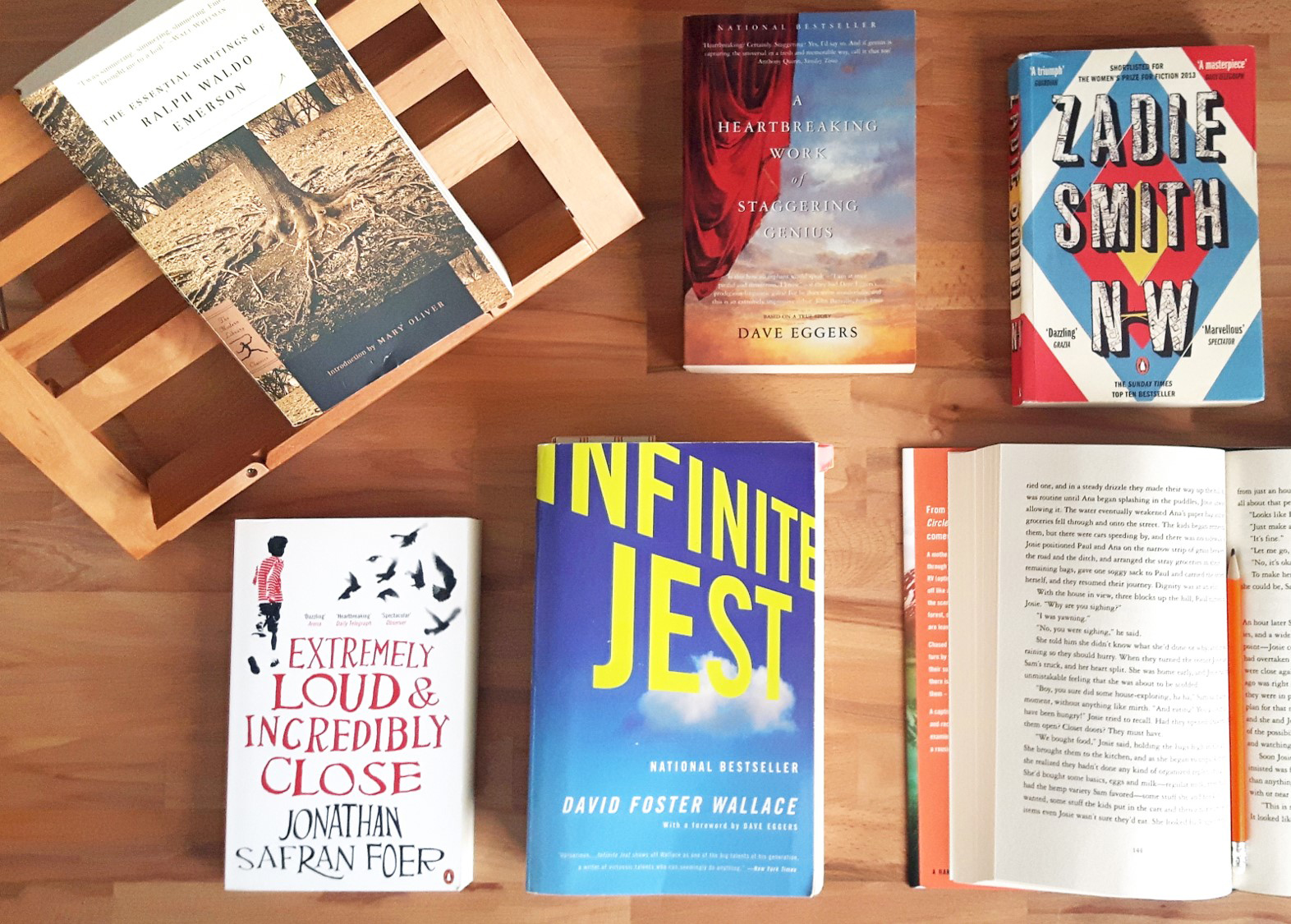 This paradigm shift, if we may call it so—not only in literature, but also in society in general—, can be seen as an attempt to recover what  called the ‘incomplete project of modernity’,[10] which started in the Enlightenment and was interrupted by the ‘cultural logic of late capitalism’.[11] The use of ideas borrowed from Romanticism helped artists and thinkers figure out the nature of the shift and create a new structure of reality that could bring back the essentialism and referentiality necessary for the construction of an identity free of the alienating feelings brought about by postmodernism.[12] The fact that transcendentalism is the philosophical skeleton of the new era in US narrative makes a lot of sense. It is a way of returning to the roots of the American identity—Harold Bloom called it “the American religion of self-reliance” (190)—through American romanticism.

The origin of postmodern relativism can be traced back to what Jean-François Lyotard described as the loss of faith in grand narratives, when he introduced the theory of language games to explain the fact that performance is the key to determine the legitimacy of a certain truth. That is, truth is not a universal concept, but it is dependent on use. Lyotard borrows the theory of language games from Ludwig Wittgenstein,[13] who establishes the validity of the referentiality of language only inside certain discrete communities of speakers where a consensus about the meaning of certain language units is reached. This means that what is true for a community may not be true for another one.

It is well known that Wallace was very much aware of Wittgenstein’s theories and that he was influenced by them; he knew that language needed to be transcended in order to get rid of relativism. He tried to do that in his works, and his novel Infinite Jest is testimony of that desire. In an interview with Larry McCaffery,[14] Wallace states that Wittgenstein puts an end to solipsism with his second major work, Philosophical Investigations (1953), as he “makes language dependent on human community, but unfortunately we’re still stuck with the idea that there is this world of referents out there that we can never really join or know because we’re stuck in here, in language” (44). The only way to try to get rid of this problem is, probably, the one that Wittgenstein defends: we should develop and perfect language in order to develop and perfect our knowledge of the world. With his extraordinary attempt to transcend language, Wallace struggled to get rid of the feelings of solipsism, existentialism and nihilism by seeking to reverse the devastating effects of postmodern irony. This new Emersonian representative man achieved it through a kind of transcendentalist honesty, and that is the heirloom that he passed down to the new generation of writers. The search for univocity and connection with others was the main characteristic of the fiction created by these writers during the decade of the 2000s.

[1] According to Charles Jencks, “Modern Architecture died in St Louis, Missouri on July 15, 1972, at 3:32 pm” (Language 23). In Critical Modernism: Where is Postmodernism going? (2007), he defines this event as “The Death of Modernism” (19) and, in the same page, Jenks says that “[his] factoid was believed because the world wished modern housing to die an ignominious death—I, of course, had no idea of the exact time in 1972.” The fact that he invented the exact time and that it is now taken as a landmark is in itself ironic.

[2] Famously, Graydon Carter, editor of Vanity Fair, pronounced the words “I think it’s the end of the age of irony” shortly after the attacks, referring to its significance, although he was not the only one to make that statement.

[4] In 1990, John Frow asked the question “What Was Postmodernism?” in the title of a chapter of the book Past the Last Post: Theorizing Post-Colonialism and Post-Modernism, edited by Ian Adams and Helen Tiffin.

[5] In ‘Postmodern Afterthoughts’, an epilogue to the 2002 edition of her influential work The Politics of Postmodernism (1989), referring to postmodernism, Linda Hutcheon declares: “postmodernism is certainly finished, even passé … Perhaps we should just say: it’s over” (165-166).

Ihab Hassan starts his article ‘Beyond Postmodernism: Toward an Aesthetic of Trust’ (2003) with the following question: “[w]hat was postmodernism?”

[7] In “David Foster Wallace and the New Sincerity in American Fiction”, Adam Kelly offers an influential reading of Wallace’s use of sincerity.

[8] In 2013, Eggers published his novel The Circle, which is full of references to transcendentalism.

[9] According to what Emerson says in his essay ‘Circles’, “[t]he life of man is a self-evolving circle, which, from a ring imperceptibly small, rushes on all sides outwards to new and larger circles, and that without end. The extent to which this generation of circles, wheel without wheel, will go, depends on the force or truth of the individual soul (253).”

[12] Timotheus Vermeulen and Robin van den Akker offer a theory—that they call metamodernism— to explain the changes of sensibility that took place after the debated death of postmodernism. In their article ‘Notes on Metamodernism’ (2010), they speak about a “Romantic turn” to explain what is happening.

[13] Lyotard makes use of Wittgenstein’s theory in his seminal book The Postmodern Condition: A Report on Knowledge (1979). Wittgenstein developed the language-game theory in his work Philosophical Investigations (1953).

“The Only Way Forward Is Back” – Nostalgia, Grief and Television in WandaVision
Watchmen and Hunters: Reading Nostalgia, Repair, and Heroism in American Historical Fiction
The Cold War and the Origins of US Democracy Promotion
Asian American Solidarities in the Age of COVID-19
Review (Part Two) of IAAS Annual Conference
As American as Apple Pie: U.S. Female Converts to Islam
The Significance of "ME" (1915): The Literary Fame of Winnifred Eaton (Onoto Watanna)
Storify of our #bookhour on HYSTOPIA by David Means