Our Latest Longest War: Losing Hearts and Minds in Afghanistan

Aaron O’Connell is a veteran of the Afghanistan war — the aptly dubbed ‘latest longest’ one for the United States — where he served as Special Assistant to General David Petraeus. The book’s title evokes both the spectre of America’s other endless war, that in Vietnam, as well as the pervasiveness of war in American political and cultural life. This is only the most recent of America’s ill-advised and destructive campaigns abroad, and it will not be the last. Yet while the war in Afghanistan occupies a place of particular importance in the litany of American wars, both because of its duration and its temporal location as a marker of the pre- and post-9/11 grand strategy of the United States, it is being fought at increasing distance from American consciousness. Indeed, one well-known political commentator recently remarked that America is no longer at war today, having apparently forgotten that this war has yet to reach a formal conclusion.

O’Connell has written about military cultures before, and his first book, Underdogs, a cultural history of the Marine Corps, is a sophisticated work that takes both military ideology and cultural history seriously on their own terms. Our Latest Longest War is O’Connell’s second major work and, through a collection of essays penned by a diverse cast, the book bears his editorial mark in its stated desire to take seriously the ‘problems of culture’ that, the authors argue, ‘were central to the war’s outcomes’ (2).

The book is divided into nine chapters, each written by individuals with personal experience of the war. All served in Afghanistan in some capacity: two are Marines, three are Army officers, three are Naval officers, one is from the Air Force, one is an Afghan police officer, and two are civilians, one of whom served as the US ambassador to Afghanistan from 2005 to 2007. The chapters examine culture in various forms: Washington’s bureaucratic culture, military cultures and the clashes between them, and historical experiences of war and inter-tribal relations in Afghanistan itself.

The book is an important attempt to explain what has so far seemed inexplicable to most pundits and policy-makers: the inability of a military armed with ‘the most advanced technology ever used in war’ to overcome ‘an enemy that was armed primarily with rifles and homemade bombs’ (3). Yet the use of culture as an explanatory tool falls short in several respects. For all its hedging, the book’s premise — – that the problems the U.S. military confronted in Afghanistan stemmed partially from the ‘interaction of incompatible cultures’ (6) – retains an unfortunate ring of a Huntington-style clash, reducing ‘culture’ to something monolithic, static and timeless. Many of the essays frame American or, frequently, Western culture, as democratic and bureaucratic (generally inefficiently so), while Afghan culture is marked by internecine tribal warfare since ‘time immemorial’ (19). Looking to deny any implication of cultural hierarchy, or a one-size-fits-all national culture, the authors refer to the multiple cultures within the U.S. itself, from the military to the political bureaucracy. This leads us back to failures of policy as the explanation for the war’s stalemate; it is unclear, then, why culture is invoked as an explanatory tool at all.

In one chapter, the failure to adequately train the Afghan National Security Forces comes down to the ‘maddeningly complex terrain of Afghan culture’ and an inability of American and European allies ‘to work outside Western concepts of modernity, progress, and bureaucracy’ (108-109). ‘The purported goals of the [training] course,’ write Dr. Martin Loicano and Captain Craig C. Felker, USN, ‘were… to make [the recruits] “professional,” “impartial,” and “objective”— all terms that had little meaning to Afghans who would always be wedded first to tribal loyalties and defense of family before anything else’ (123). This kind of rhetoric, rendered in strikingly categorical language, infuses the text: ‘These basic facts— that Afghans always put family and tribe before nation… suggests that no amount of lecturing in a contractor-run classroom could have enjoined the Afghans to behave like their Western counterparts’ (124).

As these comments make clear, ‘culture’ in the hands of the careless can serve to reduce entire nations, religions, or groups of people to ‘shut-down, sealed-off entities that have been purged of the myriad currents and counter-currents that animate human history’, as Edward Said warned. Afghans are here portrayed as a singular people incapable of democracy and the rule of law, a claim which is packaged and naturalised as exotic cultural difference. Afghans appear to exist outside of time and outside of history, as O’Connell gestures toward in his concluding quotation of President George W. Bush: ‘The history of military conflict in Afghanistan . . . [is] one of initial success followed by long years of floundering and ultimate failure’ (307). History in Afghanistan repeats itself in an endless loop; its people are not active participants in shaping their own lives.

While its aims are to be commended, and there is much of value here given each of the contributors’ personal experiences in Afghanistan, the idea of ‘culture’ that the authors employ is simultaneously too wide and too narrow to explain this American war of unprecedented duration. When it comes down to it, it is just too simple to argue that the ‘non- negotiable demands of human dignity’ are what the Americans are fighting for in Afghanistan and what Afghan culture, whatever that might be, resists (313). ‘The major contest in most modern cultures concerns the definition or interpretation of each culture’, Said cautioned Huntington. It is an admonition that rings true still. 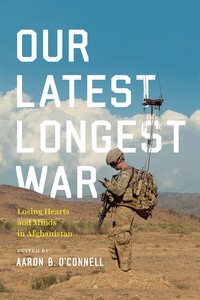 Ruth Lawlor is co-editor of U.S. Studies Online. She is a PhD candidate in history at Sidney Sussex College, University of Cambridge, and a Fox International Fellow at Yale. Her research on gender and U.S. foreign relations is supported by the Arts and Humanities Research Council UK, the Cambridge Trust, and the Robert Gardiner Memorial Fund. She is a recipient of the American Historical Association's Albert J. Beveridge Research Grant (2018) and the Society for Historians of American Foreign Relations' Samuel Flagg Bemis Dissertation Research Grant (2018). You can follow her on Twitter at @lawlor_ruth
View all posts by Ruth Lawlor →
Tagged  C20, C21, Foreign Policy, War.
Bookmark the permalink.