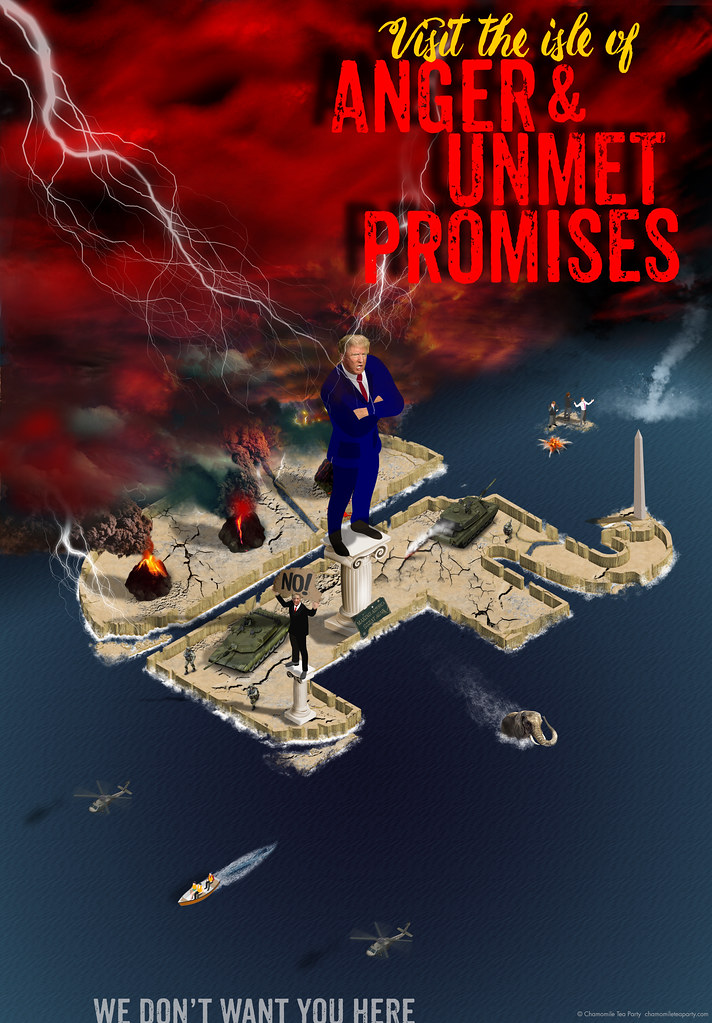 “Visit the Isle of Anger and Unmet Promises” by outtacontext is licensed under CC BY-NC-ND 2.0

In an interview with the journalist Bob Woodward during his 2016 presidential campaign, Donald Trump admitted that he inspired rage in the American people. “I don’t know if that’s an asset or a liability,” he claimed, “but whatever it is, I do.”[i] Trump possessed—and continues to possess—a power unlike many previous candidates to influence and change the news cycle simply by Tweeting.[ii] He used this uncanny ability to manipulate media attention to secure the Republican nomination and push his agenda through outlets such as Fox News during the last election cycle.

However, Mr Trump’s shock victory in 2016 was achieved using methods that were an exercise in short-term strategy, which may ultimately help lead to his defeat in 2020. In 2016, Trump used partisan language to engender a siege mentality among his supporters and divide the electorate. This same language, coupled with continued smear campaigns and empty promises, now threatens to overwhelm him and his legacy.

During the 2016 campaign, Trump created slogans for his opponents to discredit them and used his platform to push conspiracy theories about them. He suggested that his Republican rival, whom he called, “Lyin’” Ted Cruz, was indebted to shady business interests and implied Cruz’s father, a Cuban immigrant, was involved in the assassination of President Kennedy.[iii] Trump used the same tactic on Democratic nominee Hillary Clinton, nicknaming her “Crooked Hillary”, and accusing her of corruption. He argued that she was indebted to Russian interests, incompetent, as thousands of e-mails from her office were leaked, and unfit for high office due to her personal health concerns in the months leading up to the election.[iv] Even respected media institutions were not, and are not, safe from Trump’s smear campaigns, as he labels the New York Times as “failing” in an attempt to delegitimise those he fears will discredit him and his campaign.

Throughout Trump’s 2016 campaign, he regularly used inflammatory, “outsider” rhetoric to cast himself as the underdog. His attempts to appeal to the right wing of his party caused his opponents to denounce him as “taking hate groups mainstream” and promoting “racist lie after racist lie.”[v] This created a siege mentality in his core voter base as they believed Trump to be the ultimate political outsider and a man of the people. To further this image, Trump repeatedly argued that he was unaffiliated with corrupt politicians and would “drain the swamp” of Washington D.C.

Trump’s underdog persona combined with the siege mentality he engendered worked in his favour. He polarised the electorate and swept into office on the back of frustration against the Obama administration felt by many voter groups who believed they had been marginalised; he particularly attracted the vote of white evangelical protestants, who supported Trump by a 77% to 16% margin.[vi] Trump also won the suburban vote, by around five percentage points—a significant amount.[vii]

This polarisation was achieved using a damaging strategy. While crafting his presidential persona, Trump made promises that seemed outlandish, but which appealed to large sections of Republican voters. Some of the more visible, well-reported of these claims included building a border wall between the United States and Mexico to stop illegal immigrants from entering the country and publicly courting the controversial idea of banning Muslims from travelling to the United States.[viii] While this strategy pandered to a particular segment of the Republican base, Trump’s victory came at a price for the American people. As Republican Congressman Mark Sandford put it, Trump “fanned the flames of intolerance”, and deepened divisions within American society.[ix]

Four years later, the criticism Trump now faces is not overtly different to what the Republican candidate received from the media in 2016. Having previously been criticised for his attempts to besmirch his opponents, Trump’s claims of dementia and attempts to sloganise his opponent Joe Biden as “Sleepy Joe”, have not caught on to the same extent as “Crooked Hilary.”[x] While he has attempted to tap into concerns about Biden’s age—the Democrat is 77 compared to Trump’s spritely 74—data collected by The New Statesman suggests that the nickname has not caught the attention of the electorate in the same way as his 2016 efforts did.[xi]

The polarisation strategy pursued by Trump in 2016 has worked almost too well: he has not only pushed the Democratic and Republican parties further apart, but has also alienated swathes of Republicans as well, partially due to his actions as president and partially due to his inability to follow through on the promises he made throughout his presidential campaign. As a result, Republican rebels—including the husband of one of Trump’s most prominent former counsellors Kellyanne Conway—have formed the Lincoln Project. Aimed at ensuring Trump is not re-elected, The Lincoln Project has released several advertisements and videos highlighting issues with Trump’s credibility and character as the election looms.

In contrast, Biden’s 2020 presidential campaign has recognised the potential for negative press and largely avoided copying Trump’s tactic of being drawn into public disputes via the media. By engaging in more traditional methods of campaigning, the Democrat has created a more presidential air. He has used photo opportunities—such as a recent visit to the popular southern fast-food chain, Cookout—to his advantage far more than Trump, who has received criticism for continuing to hold large rallies in spite of the Coronavirus crisis. Biden has also created a “multimillion dollar operation” to combat online misinformation, deemed the “Malarkey factory.”[xii]

These conscious choices to differentiate Biden from Trump’s campaign style have yielded results as Biden has recorded some of his best polling results as the election campaign moved into October.[xiii] Though Biden’s performance in the first presidential debate in September was characterised by the BBC as trading “insults and barbs”, the criticism of Trump was more severe; the BBC assessed that a sitting president had “once again” trashed the norms of conventional behaviour.[xiv] Ultimately, the persona Trump crafted during the 2016 election campaign has inspired challenge, directly and indirectly, from both sides of the political aisle and threatens to upend his re-election.

Alongside these challenges, Trump’s record of broken assurances has caught up with him. His promise to “clean up” Washington D.C. and end corruption was not followed through in office; reports released in July 2020 found Republican lobbyists with ties to the president “thrived” during the early stages of America’s Coronavirus crisis, successfully securing over $10.5 billion in federal aid.[xv]

Likewise, Trump’s attempts to enact the contentious policies of 2016 have not been wholly successful. By June 2020, 200 miles of the intended 2,000 miles of border wall had been completed and a federal appeals court blocked the administration from diverting military funds to pay for continued construction.[xvi] An executive order intended to enforce the travel ban was held up for several years in litigation, and although it was expanded in early 2020, Trump has not succeeded in stopping Muslim migration to the United States.[xvii]

The result is that, as well as being attacked by both Republicans and Democrats for his statements, trust in the president is close to an all-time low. By June 2020, only 36% of Americans felt Trump was a trustworthy leader, and even Republican polls show that trust in the president has dropped since he took office.[xviii] This is highly damaging for Trump and exposes his 2016 election tactic as one of necessity as opposed to long-term strategy: policies were created for the purpose of grabbing headlines, with less care given to the process of actually enacting them after election.

Now as a result of his short-sighted 2016 campaign and troubled presidency, Trump finds himself in the position of having to face up to the polarisation he helped stoke. He confronts a situation where his actions have caused him to trail in polls leading up to the 2020 election. A poll carried out by the National Broadcasting Company and the Wall Street Journal (NBC/WSJ) in mid-September found that around 90% of voters said they have “firmly made up their minds”, with nearly 50% of all registered voters saying there is “no chance at all they would support Trump.”[xix] A Gallup Poll published on 4 February 2020 recorded a massive gap in Republican and Democratic support for the president—89% from Republicans and 7% from Democrats.[xx] This is worrying for the president, as it shows his actions have generated a tremendous lack of support outside his core base. Equally, his response to the Coronavirus crisis has inspired wildly polarised responses from Democrats and Republicans, especially following his October diagnosis and an outbreak in the White House.[xxi]

Trump once again leads among white evangelicals and Christians, who make up a significant proportion of registered voters, though it is notable that even here voting intention is lower than 2016.[xxii] The independents and blue-collar workers who were instrumental in his 2016 victory are also moving away. For example, Biden holds a narrow lead in Arizona, a state with over one million registered independents and which narrowly went to Trump in 2016 with him earning 48.1% of the votes to Clinton’s 44.6%.[xxiii] Trump has once again sought the suburban vote that propelled him into the White House by targeting suburban women. The administration promoted fears over crime and falling property rates but has found it much more difficult to capture their attention this time round. A New York Times report in September indicated these suburban voters are not responding with the fear Trump anticipated, instead being largely unaffected by his rhetoric.[xxiv]

Trump’s ascension to power has ultimately reflected a troubling trend in American political communication. It has cast a mainstream focus on the ever-widening partisan gap between liberals and conservatives in American politics and displayed an increased lack of professionalism within political discourse.[xxv] In the interim four years, the incivility and rancour shown by the president has divided the country even further along these lines. In 2020, Trump now finds himself fighting against not only his Democratic rival Joe Biden, but also the memory of his actions since 2016, to secure another term in office.

[vi] Pew Research Center, An examination of the 2016 electorate, based on validated voters, 9 August 2018, https://www.pewresearch.org/politics/2018/08/09/an-examination-of-the-2016-electorate-based-on-validated-voters/

[vii] Joel Kotkin and Wendell Cox, It Wasn’t Rural ‘Hicks’ Who Elected Trump: The Suburbs Were – And Will Remain – The Real Battleground, Forbes Magazine, 22 November 2016, https://www.forbes.com/sites/joelkotkin/2016/11/22/donald-trump-clinton-rural-suburbs/#56b8e91f38b5

[xiii] Nathaniel Rakich, Biden Got Some Of His Best Polls This Week, FiveThirtyEight, 7 October 2020, https://fivethirtyeight.com/features/biden-got-some-of-his-best-polls-this-week/

[xx] Poppy Noor, They hate each other’s political views – so why have they become friends? The Guardian, 30 September 2020, https://www.theguardian.com/lifeandstyle/2020/sep/30/politics-polarization-friends-america

The War Memorial in Visual Culture - Triumphalism and Repression in The West Wing and The X-Files
War Among All Puerto Ricans: The Nationalist Revolt and the Creation of the Estado Libre Asociado of...
Book Review: The World Reimagined by Mark Philip Bradley
‘Still being sent to Nam to protect America's myths’: Anti-war Soldiering and the Challenge to Cold ...
“Your Name is Safe”: The Ladder as lesbian literary community
Latinos and the Language Question: Arizona, 1967-70
"An exceptional opportunity": Rachael Alexander on the role of BAAS Postgraduate Representative
Book Review: Literary Fiction: The Ways We Read Narrative Literature by Geir Farner

Ben Quail is currently a teaching assistant at the University of Strathclyde, having graduated from the same university with a PhD in American history in 2018. His research looks at propaganda within the US Presidency, and particularly the evolution of the relationship between President and press. Ben is currently working on his first monograph, a review of Lyndon Johnson's press strategy, due for publication in 2021. Ben has an MSc in Historical Studies from the University of Strathclyde and a BA in History. He has previously been a postgraduate fellow at the Eccles Centre for North American Studies in 2015
View all posts by Ben Quail →
Tagged  American Politics, Election Series 2020.
Bookmark the permalink.