Obama’s West Point Vision: Or, How to Retreat from Military Intervention and Democracy Promotion 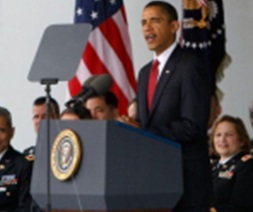 President Obama’s commencement address at West Point on 28th May 2014 was designed as an explanation of his administration’s thinking on foreign policy and a defence of his recent record against the attacks of domestic critics, who argue that US influence in the world has weakened and that the US is in decline due to the President’s failure to get tough in Syria and the Ukraine. In place of such intervention, Obama claimed, US influence will be exercised through multilateral institutions and a combination of soft power and foreign assistance. However, the speech failed to articulate a positive overarching strategy for US foreign policy. Rather than seeking to transform the world, Obama seeks to manage it in order to defend US core interests, including the security of the homeland and of key American allies, and to shift as many of the costs of intervention as possible onto partners.

This turn away from more direct intervention goes beyond a rejection of the previous administration’s agenda and represents a retreat from some of Obama’s own priorities, provoked by the failure of US policies over the previous ten years. The administration’s limitation of military intervention to circumstances which threaten US core interests is a response, not only to the failure of the Bush administration to achieve its maximal objectives in Iraq, but also to the outcome of the US campaign in Afghanistan. It is true that the Bush administration carried out the initial invasion of that country, but it was Obama who identified it as the key theatre in the War on Terror. Indeed, Obama increased the deployment of US troops to try to stabilise Afghanistan, from 27,400 at the end of the Bush presidency to 94,000 at their highest point under the new administration, from August 2010 to May 2011.

However, while the US has progressively reduced its forces since this high point the insurgency has continued to grow, and the number of insurgent attacks in provinces where foreign troops have been withdrawn has increased, according to a report by the International Crisis Group. Obama’s future Afghan policy, presented as a shift to a “train and support” mission now that Afghan security forces have increased to 350,000 and that Afghanistan has held elections, resembles a declaration of victory to justify withdrawal. However, the current situation in Afghanistan bears no resemblance to the visions of Presidents Bush and Obama of a more stable state that could not act as a possible haven for terrorists in the future. The reality is that the war has not been won and that Afghanistan remains a fundamentally fragile and divided state.

Thus, the President’s new counter-terrorism policy is to create partnerships with governments from “South Asia to the Sahel” to support local militaries to combat militants through a $5 billion fund. These support operations will be conducted multilaterally if possible, relying on support from NATO partners, and are designed to avoid commitments of ground troops in societies which the US poorly understands, preventing yet another military morass. A similar course will be followed in Syria, where Obama stated the administration will work for a political solution whilst offering unspecified support to unspecified moderates, while strengthening the ability of surrounding countries to guard their borders against more extremist elements.

In place of intervention, the President advocated greater engagement with the United Nations and the use of diplomatic and economic instruments. As an example, he cited US influence over world public opinion as a key tool in isolating Russia and bringing pressure to bear on the Russian government in response to the current Ukrainian crisis. In East Asia, Obama offered US support for multilateral efforts to de-escalate conflicts arising from Chinese claims to islands in the Pacific.

In addition to retreating from direct military intervention, Obama also seemed to further reduce the importance of democracy promotion as a US goal. While the President did discuss the extension of democracy, he did so largely in abstract terms, unveiling no new programs and no strategic vision for the global or regional extension of democracy. The only specific cases mentioned were Egypt and Burma, and the inclusion of the latter diluted the focus of US democracy promotion on the Middle East, where it has rested for over a decade. While democratic reform in the region was a higher priority for the Bush administration, at least rhetorically, this also represents a step away from Obama’s own post-Arab Spring agenda, which the President appeared to hedge and qualify during his speech at the UN in September 2013. This is a product of policy-makers’ recognition since 2011 that the US possesses neither the ability to forecast political change in other key states, nor to pressure them to reform in ways that will support US national security, revealed most clearly by Washington’s incapacity to exert more than a marginal influence on Egypt’s political dynamics since the overthrow of Hosni Mubarak.

Thus, rather than rhetorically championing democratisation in Egypt and Burma, Obama used less loaded terms such as support for “reforms” through engaging current governments. He also stressed the national security advantages of taking such an incremental approach in terms of preserving or enhancing diplomatic relationships. It is clear that in general the administration conceives democratic change as a gradual, incremental process unlikely to disturb the US pursuit of its short-term national security priorities through maintaining relations with friendly but repressive governments. Thus, immediate national security priorities are likely to be prioritised over long-term democratic aspirations at the level of high policy, although low level support for democracy overseas through USAID projects and aid to civil society groups will continue. This places Obama in the historical mainstream of US foreign policy, supporting democratisation on a case-by-case basis when it is judged to assist in the pursuit of pre-existing national security aims rather than as a key element of a larger strategic framework. 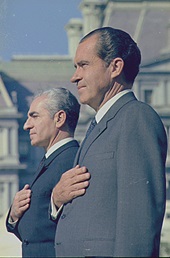 President Nixon with the Shah of Iran, a key ally under the Nixon Doctrine

In one sense the President’s blueprint recalls the foreign policy of the 1990s, also characterised by a preference for a multilateral approach when possible and a reluctance to commit US ground troops. However, Obama’s approach lacks Clinton more expansive concept of “democratic enlargement”. A closer historical parallel might be the Nixon Doctrine, which was based on the use of regional proxies to maintain order in the Third World rather than direct intervention, and the de-emphasis of more expansive strategic and ideological ambitions. During the 1970s this approach was compelled by factors such as economic weakness and reduced support for US intervention, both at home and abroad, which also characterise the US’ current situation.

As the President remarked at West Point, the US has “been through a long season of war”. Thus, Obama’s reliance on local militaries to keep order in the wake of draining interventions in Iraq and Afghanistan performs a similar function to Nixon’s reliance on pro-US dictatorial regimes during the US disengagement from Vietnam; freeing the US from sapping entanglements in the Third World to focus on the management of its relationships with other key states, such as Russia and China, and defending its core interests by attempting to negotiate acceptable outcomes in Europe and Asia-Pacific. Ultimately, Obama’s stance represents an accommodation to the current reality that at present, America is unwilling and unable to pay the potential economic, military and political costs of a more expansive strategic and ideological posture.

Robert Pee has recently graduated the University of Birmingham with a PhD. His thesis, titled “Democracy Promotion, National Security and Strategy under the Reagan Administration: 1981-1986”, examines the relationship of democracy promotion to national security in US strategy, with a particular focus on the origins of the National Endowment for Democracy and on democracy promotion during the Reagan administration. His research interests include US Democracy Promotion during the Cold War and the War on Terror, national security strategy, the role of non-state actors in the formation and execution of US foreign policy, and US policy towards the Arab Spring.
View all posts by Robert Pee →
Tagged  C21, Democracy Promotion, Foreign Policy, Obama, Presidents, Soft Power.
Bookmark the permalink.