The text for May’s forthcoming bookhour discussion, Henry David Thoreau’s Cape Cod, has never attracted scholarship in the way that Walden, ‘Resistance to Civil Government’, and the Journal have done. A compressed account of several trips Thoreau made to the Cape between 1849 and 1857, its first four chapters were serialized in Putnam’s Magazine over the summer of 1855, after which it remained in Thoreau’s papers until its eventual posthumous publication in 1865, edited by Thoreau’s sister, Sophia, and his close friend Ellery Channing. If there is such a thing as a popular conception of the work, it probably follows the lines of biographer Walter Harding’s comment that it is “Thoreau’s sunniest, happiest book. It bubbles over with jokes, puns, tall tales, and genial good humor.” Sunny and happy it sometimes is, in spite of the fact that it opens with a highly imagistic chapter describing the effects of drowning on the human corpse. Likewise, while the jokes, puns, and tall tales are all there, they frequently appear in amongst detailed histories of the idiosyncratic preaching styles of generations of New England Puritans.

In other words, it echoes the blend of geniality, history, metaphysics, and occasional grotesqueries found in the celebrated works of contemporaries such as Hawthorne, Melville, or Poe, yet the book is maligned, an enigma in Thoreau’s catalogue. This alone recommends its rereading, but more urgency comes in its contemporaneity with the other, more commemorated sesquicentenary Americanists will have in mind this year—that of the Civil War. U.S. Studies Online’s bookhour, taking place on Tuesday 26 May between 8 and 9.30pm, offers the opportunity to reconsider Cape Cod as an extremely curious document of the immediate postbellum period. The book engages throughout with images and ideas of death and desolation, something pushed to the forefront of the American mind by 1865, and does so with a keen eye to the course of American history. This makes it an essential text of its era, prescient of the necessity for a kind of national introspection and soul-searching, and a key part of our discussions in May should concern Thoreau’s augury of his nation’s future in the book’s dominant themes. Although written in the 1850s, the book indicates a desire that it might be read without reference to the time and place of its composition. In its final line, Thoreau proposes that the Cape is unique because there the traveller might “stand … and put all America behind him,” (238) a quality which speaks both of the Cape’s extrahistorical status and a vantage point to bring the entire nation into a single view. In the preceding text, Thoreau develops multiple versions of this perspective, offering unusual interpretive tools for rethinking the way that America’s literary tradition reflected on the social, cultural, and political contexts of its production.

As its morbid opening chapter suggests, if the book can be said to cohere around a central theme besides an overtone of geniality, it is death. That chapter features the scene of the shipwreck of the St John, a brig carrying Irish migrants to Boston which sank in October 1849, and Thoreau’s sightseeing tour begins with the attraction described on a handbill headed “‘Death! One hundred and forty-five lives lost at Cohasset!’” (15). But the theme extends to resonate and evoke other deaths, figurative and literal, that characterize American consciousness in the era. Those imagistic descriptions of the drowned, with their “marble feet and matted heads” (16), might have evoked similar feelings to those experienced on viewing the widely-distributed photographs of America’s war dead—would Thoreau’s audience have concurred with his remark that such sights were “not so impressive a scene as I might have expected … corpses might be multiplied, as on the field of battle, till they no longer affected us in any degree” (20)? As may be expected, Thoreau’s witnessing of death quickly turns to metaphysics. His recollection of his search for Margaret Fuller’s remains on Fire Island in 1850 makes the discovery of some unidentifiable “bones with a little flesh adhering to them” (108) an experience of the sublime indifference of nature, but we might extrapolate further. Thoreau’s association between the sea and a world beyond was deep. His last coherent words as he laying dying in 1862 were “now comes good sailing,” and Cape Cod added to his intended resonances further circumstantial ones. In between its writing and its publication, Thoreau had died of tuberculosis, many thousands of his countrymen and women had died in the Civil War, and America was profoundly changed. To what extent, therefore, might the book be seen to anticipate of the spectre of the war? Is the Cape’s barren liminality, of which Thoreau remarks so often, an environment peculiarly suited to thinking over the idea of living and dying in America? 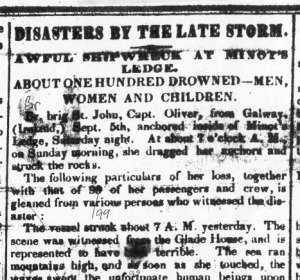 Boston Daily Bee, October 9th 1849, of the shipwreck of the St John.

Thoreau’s insistence that being on the Cape gives one the impression of being on a ship at sea also mean that the text constitutes his solitary contribution to America’s tradition of maritime narratives. Notoriously, Thoreau only left the United States once during his life, on a short excursion to Canada, making the Cape the nearest he got to an experience of the oceanic. Some of his reflections are the typical stuff of contemporary maritime narratives. He indulges in metaphysical analogy, making the ocean not only the cause of many deaths, but the type of death itself. Hence it is no more visible in the most part than is “another world” (13), unchanged since creation, and its shoreline constitutes “a sort of neutral ground,” an impersonal, “inhumanly sincere” (182) environment that provides the predicate for musings on the security he observes his fellow mainlanders taking for granted. But frequently, in his digressions into the effects of this environment on monetary and spiritual economies, these musings become more specific, tending toward an implicit civic critique. The scenes of death Thoreau witnesses so dispassionately are themselves part of an established economy on the Cape, shipwrecks being common enough that their events are accompanied by “no signs of grief,” but merely “a sober dispatch of business” (16). Shipwreck itself then becomes a central point in Thoreau’s consideration because its history mirrors the development of the market which depends on maritime trade, and this adds to the privilege that the Cape affords in its exposure to this concealed history. As Thoreau notes:

After almost every storm we read of one or more vessels wrecked here, and sometimes more than a dozen wrecks are visible from this point at one time. The inhabitants hear the crash of vessels going to pieces as they sit round their hearths, and commonly date from some memorable shipwreck. If the history of this beach could be written from beginning to end, it would be a thrilling page in the history of commerce. (157)

As is his habit, Thoreau does not elaborate here on what he intends ‘thrilling’ to mean, but his reasoning implies that it is thrilling because of its difference to the economic systems that were available to be read. The sea, Thoreau incessantly reminds his reader, has “no relation to the friendly land” (122), but is neutral, barren, uncompliant with Thoreau’s “determination to get it into us” (174). Against the economy of Boston, purely numerical and quantitative so that the city is the sum of the commodities traded there (“the more barrels, the more Boston” (233)), Cape Cod’s fragile existence depends on the benevolence of the inscrutable ocean. A point of discussion here, therefore, is how this perilous sustenance might guide postbellum America, what exactly it critiques in existing systems, and what alternatives it might offer.

The Cape in American History

If one area of Thoreau’s critique stands out for independent discussion, however, it is his handling of the Cape’s own history. The barrenness of Cape Cod declines any nostalgia for a pre-industrial idyll, but it also challenges the sense that America is well-settled and the order of its social structure established on solid ground. Thoreau’s consistent engagement with texts of American history spans the theological and the political along with the geographical and the natural. In this inheritance, multiple sources concur to tell us that the Cape found by the Pilgrims was “well wooded, … having a deep and excellent soil, … hardly mentioning the word sand” (220). All of which suggests, of course, not simply an extension of the lapsarian in humanity’s sin, but also a more pragmatic mismanagement on the part of the land’s occupants, leaving them dependent only on the doubtful providence of the “savage ocean.” Thoreau seems to be suggesting that his nation’s folly is principally its bad husbandry, but it is not immediately clear what alternative system he has in mind, and the discussion on the 26th May ought to offer a chance to tease this idea out.

Even if its author is undoubtedly among America’s literary luminaries, Cape Cod is nevertheless the site of undisclosed alternative historical perspectives; a text concerned, unusually, not with the present horrors of slavery or conflict, but with finding a way to view America immanently and yet at a distance. Each of the stages described above—the fixation with death, a desire for an oceanic perspective, and an interest in geographical and natural rather than cultural history—goes some way toward effecting this. Whether or not Thoreau achieves this is something we might discuss further in the bookhour discussion in May; for my part, I find it fascinating that if he does so, his success has something to do with the distance afforded by the circumstance of his death.

Benjamin Pickford completed his PhD on Ralph Waldo Emerson at the University of Nottingham in September 2014. He is currently working on two monograph projects - an intellectual biography of Emerson focusing on his poetic theory, and a cross-disciplinary study of alternative economic models in late nineteenth-century American culture.
View all posts by Benjamin Pickford →
Tagged  C19, Religion, Transatlantic, Transnationalism.
Bookmark the permalink.