Not just Yo’ Mama but Rap’s Mama: The Dozens, African American Culture and the Origins of Battle Rap

The website Rap Grid is considered the ESPN of battle rap.

Rap music has always been filled with braggadocios lyrics and rappers “dissing” other rappers in their songs. Battle Rap is a style of rapping that evolved as a way for rappers to competitively display their prowess to a live audience on the microphone.[1] A rap battle usually consists of two MC’s (Master of Ceremony, a rapper) that attempt to outduel each other by verbalizing the best rap lyrics. One of the first legendary live rap battles took place in December of 1982 between rappers Busy Bee Starski and Kool Moe Dee.[2] Later popularized by the rapper Eminem’s quasi-autobiographical 2002 movie, 8 Mile, where there are several scenes of Battle Rapping, there has been a resurgence of popularity with Battle Rap. So much in fact that rap battles are now sold via pay-per-view outlets throughout North America.[3] But did two men battling it out utilizing rhymes actually originate with the Hip-Hop community?

Long before rap music appeared, there was an art form of verbal combat called The Dozens. Grammy Award winning musician and author Elijah Wald stated in a 2012 interview with the Boston Globe,

Rap battling is really what’s more like The Dozens. Because people battle and sometimes they genuinely dislike each other, but sometimes they’re really good friends. And if they’re good battlers, you can’t tell which you’re watching, because either way they’re going to…say the nastiest things they can think of, and that’s really how The Dozens works: It’s about the creativity. It’s about saying something not only nasty enough so that the other guy can’t think what to say, but also funny enough that the audience thinks that you’ve just done something smart. That’s the combination at the heart of The Dozens.[4]

According to psychologist John Dollard, the first scholar to examine The Dozens in 1939, “Of all the elaborated forms of verbal art found in American Negro folklore, none is more central in the life of a Negro adolescent male than ‘The Dozens’.”[5] While Dollard’s statement is obviously hyperbolic and anachronistic, The Dozens is none the less a ritual practiced by many African-Americans both male and female, during their youth and oft-times continues into adulthood.[6] The dozens is an African-American contest game in which two contestants, usually in the presence of a goading audience of peers, try to best each other in casting aspersions upon each other or each other’s relatives, particularly the mother.[7] Utilizing quips often in rhyme, the combatants trade insults, for example: Yo’ mama is so stupid that she put a coin in a parking meter and waited for a gumball to drop out. Roses are red, violets are grey, yo’ mama’s so ugly, I don’t know what to say except roses are red, violets are black, yo’ mama’s chest is as flat as her back. The mother is very often, but not exclusively, the target of the invective most probably because of her sacredness and importance to her child in both African and Afro-American cultures.[8] There are two ways to play The Dozens: games characterized by references to sexual organs or sexual intercourse have been termed “dirty” and those not so characterized, “clean”— hence, “clean dozens” and “ the dirty dozens”.[9]

Several other terms have been utilized to describe The Dozens, such as hiking, snapping, cracking, woofing, sounding, and signifying, but the term “dozens” appears to predate them all having first entered into the lexicon in the late 1800s. Scholars, however, do not agree on the etymology of the term. The most prevalent theory appears to be that African slaves who appeared to be “defective” were sold at a discount in lots of one dozen.[10] Therefore to be in The Dozens means you must have some type of physical or mental defect to be ridiculed. 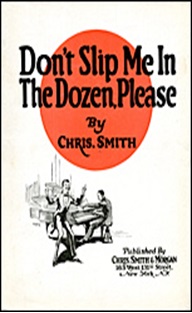 Author Elijah Wald explains that this 1921 recording by Black Vaudeville comedian Chris Smith is the first known recording about the dozens.

This contest of wit and verbal acuity is considered a rite-of-passage in African-American communities across America. One of the first mechanisms within the adolescent African-American peer group to become viewed as ‘cool’ is to display the ability to verbally beat down another. Folklorist Roger Abrahams was the second academic to study The Dozens in 1962. Abrahams describes The Dozens as an instrument utilized by lower-class Black males that “serves to develop one of the devices by which the nascent man will have to defend himself—¬the verbal contest. Such battle in reality is much more important to the psychical growth of the Negro than actual physical battle”.[11] While it can be said that in some environments The Dozens can help teach survival techniques to young Black men being reared in an antagonistic society, Abrahams’ assessment of street games like The Dozens is overly simplistic. Indeed, when examining the literature available about The Dozens, it is clear that much of the literature was produced considerably earlier in the twentieth century (1939–1965), by scholars whom obviously never experienced The Dozens in their childhood.[12]

While it is of course possible to study a phenomenon without ever having experienced it for one’s self, when a scholar’s study misses the mark on issues that the subjects of the study would themselves deem obvious, cognitive biases and the lack of personal familiarity become glaring. For example, most of the later scholars (1976–2012) would agree that The Dozens can be a protective device against being victimized since playing the game teaches self-control.[13] If a participant were to “lose his cool” and resort to violence, he would lose standing in his peer group. Not owning the verbal aplomb and skill to triumph without resorting to violence would be considered the mark of a loser. The over analysis of the phenomenon by earlier scholars in an attempt to attach a deep psychological meaning (after all, it’s just a game), the assumptions that The Dozens is “low class”, and only played by males were soundly disproven by later scholars.[14]

The Dozens would eventually be accompanied with music and recorded. The earliest known recording of the dozens was performed by Black Vaudeville comedian Chris Smith in 1921. The most famous Dozens recording is the 1938 recording performed by Ferdinand Joseph LaMothe, known professionally as Jelly Roll Morton, the self-proclaimed inventor of Jazz music. This concept of taking an African-American oral tradition and putting it to music is a time honored tradition that continues until this very day. The utilization of rhyming mechanisms and swift off the cuff lyrics needed during bouts of The Dozens was easily transferred into the linguistic styles utilized by MC’s during rap battles in the early days of the Hip-Hop era. This makes it clear then that The Dozens, as Elijah Wald writes, is “Rap’s Mama”.

[5] John Dollard, “The Dozens: Dialect of Insult,” in Mother Wit from the Laughing Barrel : Readings in the Interpretation of Afro-American Folklore, ed. Alan Dundes(Jackson: University Press of Mississippi, 1990), 275.

[14] Chimezie, “The Dozens: An African-Heritage Theory.”; Lefever, “Playing the Dozens: A Mechanism for Social Control.”; Wald, The Dozens: A History of Rap’s Mama.

"Teaching America" series Round-Up
From Harlem to Texas: African American Art and the Murals of Aaron Douglas
Surviving a Long-Distance Research Project
The legacy of Black Power Visual Culture in 1990s Hip Hop
A Brief Consideration of the American Empire Through Modern and Contemporary Poetry
Review: 'The (Re)production of Misery and the Ways of Resistance' American Studies Association Confe...
My Research: Juliet Williams
Racializing “Muslims”: Constructing a Muslim Archetype

Alvin L. Smith is a postgraduate student pursuing his PhD in American History at Royal Holloway, University of London. He received his BA in Social Science from Thomas Edison State College in Trenton, New Jersey and his MA in Modern and Medieval History from Royal Holloway, University of London. His current interests are lesser known African-American historical figures and culture motifs. He is currently researching the history of Gangsta’ Rap music. He can be found online at https://royalholloway.academia.edu/AlvinSmith
View all posts by Alvin L. Smith →
Tagged  African American Culture, Black History, C20, C21, Gender and Sexuality, Masculinity, Music, Popular Culture.
Bookmark the permalink.