In his groundbreaking book, At Day’s Close (2005), A. Roger Ekirch deftly reveals one of the significant differences between the pre- and post-industrial world: the overwhelming darkness of night in the absence of electric lighting. ‘Night brutally robbed men and women of their vision, the most treasured of human senses. None of sight’s sister senses, not even hearing or touch, permitted individuals such mastery over their environs’.  [1] In a world of perpetual light, we post-industrialists have lost the sense of terror within the pre-industrialist’s night. Unable to control the darkening wilderness that invaded their living space every twenty-four hours, they were forced to surrender control of the most valuable tool for making sense of the world – their sight.

Night was often a state of confusion in which dangers were anticipated; both the real and the imagined. Perhaps nowhere more so than in pre-industrial America, where white settlers lived in fear of their barely-tamed landscape. Although Roderick Nash’s founding ecocritical text, Wilderness and the American Mind (1965) does not directly explore the American’s nocturnal experience, it does provide a definition of wilderness which hints at it. ‘Wilderness’, he writes, is, ‘uncultivated and otherwise undeveloped land.’ However, ‘Of equal importance to these actualities are the feelings they produce in the observer. Any place in which a person feels stripped of guidance, lost, and perplexed may be called wilderness’. [2]  Night is a realm of the uncertain and unknown, it is an untamed space in which human thoughts are projected and intensified. Alike other wilderness environments, in the nighttime the usual controls of society do not apply to the same degree as they do in the daylight. As a result, individuals’ actions move towards the extremes, as there is less to inhibit them. 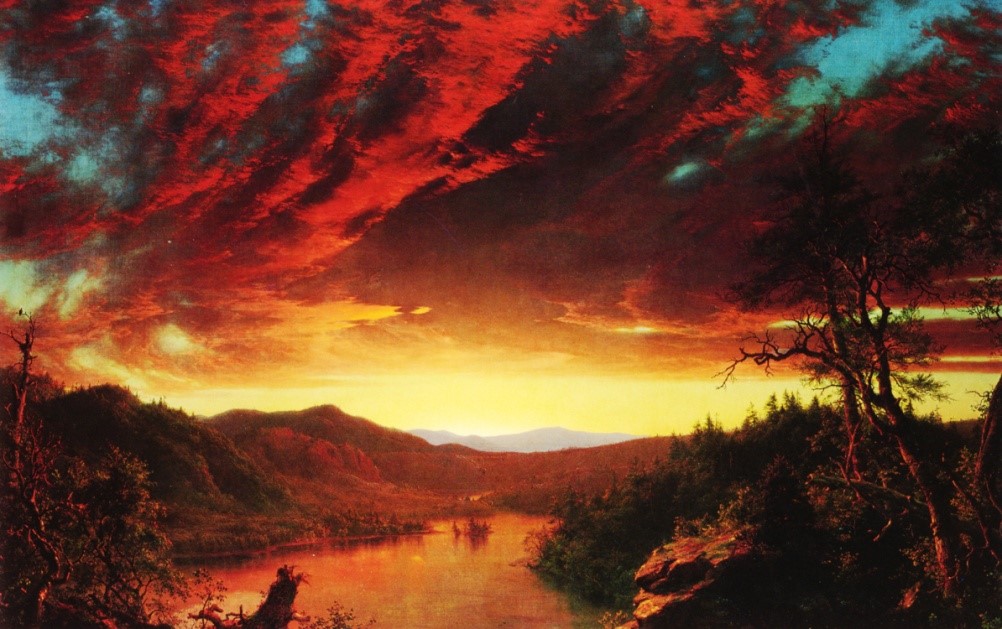 Twilight in the Wilderness (1860) by Frederic Edwin Church

One key way to discover the effect of nighttime on the individual is to see how attitudes change as the night itself becomes tamed.  Thanks to the introduction of standardised time, the expansion of the steam engine, and the increasing use of electric lighting, the nineteenth century provides an opportunity to observe how attitudes to the night shifted during the swift movement from pre-industrial to post-industrial living.  We are able to do so by examining how various American authors represent nighttime, specifically observing the ways in which they use the night to explore issues regarding gender, race, politics, and religion. This includes exploring the differing nighttime experience between men and women; how slaves used the night to explore the possibilities of freedom; how the language of Christianity influenced nineteenth century thought on the night; and how the blurring of racial and class boundaries during the night posed a challenge to the American patriarchy.

Whilst the night was a time of fear, it also provided a space for exploring issues considered by the American establishment as too distasteful for daylight hours. As Ekirch observes, ‘Night alone permitted the expression of man’s inner character’. [3] This ‘expression’ includes racism, classist bigotry, and religious intolerance. “If any real lynching’s going to be done,” Colonel Sherburn informs us in Mark Twain’s Huckleberry Finn (1884), “it will be done in the dark, Southern fashion; and when they come they’ll bring their masks”. [4] Thus, whilst the fall of night can provide a cloak of anonymity for those who conform, it also gives the American protagonist an opportunity to uncover the injustices and hypocrisies of American society, and their own complicity in these actions. [5]It is through this night-space that the ghosts of America’s past (and present) are brought to life.

However, it is also the time when the oppressed can act in resistance against the establishment. This is seen most significantly through acts of rebellion by some slaves, who maintained underground networks and communicated at night in order to escape nocturnally. Freed slave and abolitionist Henry Bibb writes how he was, ‘[…] guided by the unchangeable North Star by night, and inspired by an elevated thought that I was fleeing from a land of slavery and oppression, bidding farewell to handcuffs, whips, thumb-screws and chains’. [6] Women too found solace and escape from male-dominated society in the night, where poets such as Emily Dickinson could explore creativity away from prying eyes. Acknowledging that nighttime is a space for alternative thought and revolutionary action, Dickinson writes, ‘To races nurtured in the dark: – / How would your own begin?’. [7] Beyond the bounds of state and religion, the night often worked as an egalitarian force. Overlapping with democratic, even revolutionary ideas, it removed the boundaries of class, race, and gender that were so firmly in place in the daylight. 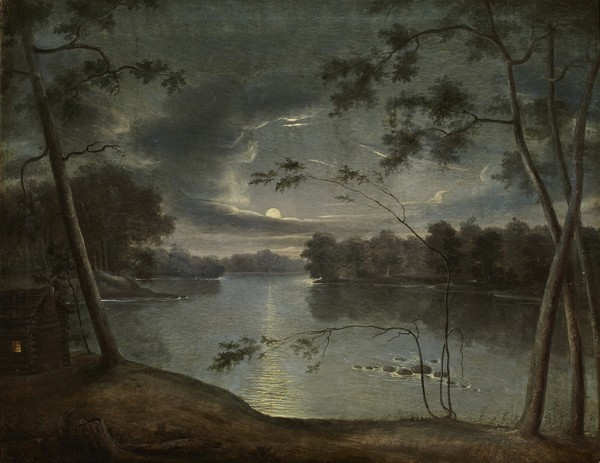 In an America that was increasingly becoming more industrialised, nighttime was also a refuge for its artists. It provided an arena for self-reflection and personal growth far removed from the stifling conventions of society. Henry David Thoreau claims in Walden (1854) that,

Every man has to learn the points of compass again as often as he awakes, whether from sleep or any abstraction. Not till we are lost, in other words, not till we have lost the world, do we begin to find ourselves, and realize where we are and the infinite extend of our relations [8]

Losing oneself in the darkness of night, Thoreau suggests, allows a reevaluation of one’s own position in the world. This in turn requires an individual to ask vital questions regarding one’s identity that are unlikely to be considered during the business of everyday living. Night is therefore a restorative space; a state which all humans need to experience in order to rediscover one’s place in the world. Similarly, Dickinson writes in her poem, ‘We Grow Accustomed to the Dark’, that though ‘The Bravest’ [9]  may have difficulty finding their way in the night,

Either the Darkness alters –
Or something in the sight
Adjusts itself to Midnight –
And Life steps almost straight. [10]

The night is for the brave — those who are willing to seek their own path in life away from the conventions of the day. Most people turn away from the night as it seems daunting and alien, but the night becomes far more familiar to those who embrace it. “Life steps almost straight” or, in other words, life starts to make more sense when seen through the medium of the night.

The nineteenth century marked the coming of a new age. Thanks to the rise of electric lighting, soon whole continents would never again know the experience of a truly dark night. Many creative and philosophical thinkers in this era were attuned to the importance of the nighttime wilderness experience, and only at the beginning of the twenty-first century were scientific and ecological thought catching up with these forebodings. This is particularly important as we are only beginning to learn how damaging the lack of exposure to dark nights can be on whole generations. The United States, along with the rest of the Western world, is increasingly losing its dark skies due to an ever-growing use of artificial lighting. Today, the loss of the dark is also leading to problems along racial and class lines. As Paul Bogard observes, African Americans disproportionately work night shifts and suffer greater health problems as a result, while poorer city neighborhoods suffer from excess lighting at night in an effort to deter crime. [11] As America demands more from its workforce, nighttime is becoming one of the last refuges for freedom. In 2007 UNESCO published a ‘Declaration in Defence of the Night Sky and the Right to Starlight’, which marked both the significance and scarcity of the sublime darkness seen by our pre-industrialist counterparts, ‘An unpolluted night sky that allows the enjoyment and contemplation of the firmament should be considered an inalienable right of humankind.’ [12]  For Ekirch, darkness represents more than a ‘right’. It stands as, ‘[…] the largest remaining frontier for commercial expansion’. [13] If nighttime is indeed America’s final frontier, it could risk losing one of the final avenues for the creativity, individualism, and alternative thinking that has come to define it.

[5] Barker, Wendy. Lunacy of Light: Emily Dickinson and the Experience of Metaphor, (Carbondale and Edwardsville: Southern Illinois UP, 1987) p.108

The Mandalorian: The Latest Space Western Series in a New Era of American Television
Exploring the French Caribbean and Joseph Zobel
“Where is Thy Sting?”: Clifford Odets and the Problem of Audience
A Brief Consideration of the American Empire Through Modern and Contemporary Poetry
Songs about Rebels: The American Civil War in modern country music
The War Memorial in Visual Culture - Triumphalism and Repression in The West Wing and The X-Files
Review of Culture and the Canada-U.S. Border 2014 Conference
Review: IAAS Postgraduate Conference, 'E Pluribus Unum: Out of Many, One'

Sarah is currently a PhD.Litt student of American Literature in Trinity College Dublin. Her supervisor is Professor Stephen Matterson. She is a graduate of University College Dublin where she received a BA in Drama Studies and English and an MA in American Literature. While in UCD she was the recipient of several awards including the Mary Colum Award and the UCD Postgraduate Scholarship. She also won the Irish Association for American Studies 2013 WTM Riches Essay Prize. She can be found on Academia.edu here: https://tcd.academia.edu/SarahCullen
View all posts by Sarah Cullen →
Tagged  C19, C20, C21, Cultural History, History, Literature, Popular Culture, Wilderness, Women's Writing.
Bookmark the permalink.