Nantucket as a Summer Holiday Destination

Nantucket as a Summer Holiday Destination

This is the eighth post in a special series exploring and discussing artefacts from a selection of Adam Matthew Digital collections. This article uses primary sources from the ‘Leisure, Travel and Mass Culture – The History of Tourism’ collection, which can be accessed here. 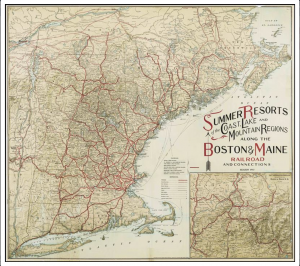 The small spit of land off the coast of Massachusetts which maps refer to as ‘Nantucket’ was called the ‘far away land’ by its first settlers, the Wampanoag Nation. Nowadays, this small island, which at just under 273 km squared is smaller than Malta or the Maldives, is easy to reach by long-distances bus and the ‘Cape Flyer’, by high-speed ferry or by commercial airline. In our hectic twenty-first century, Nantucket is marketed as a holiday destination which combines unspoilt beaches, picturesque harbours and peaceful shingle-style residences, and nowadays Nantucket’s 11,000 residents host up to 50,000 visitors during the ‘season’. But how did this extraordinary island market itself a century ago to its summer visitors from the US-American mainland?

AMD’s Travel and Mass Culture Gallery offers valuable insights. Particularly noteworthy in this collection is Folger and Rich’s 1878 Handbook of Nantucket dedicated by its authors to summer visitors who ‘desire an accurate, condensed epitome of the island’s historical data […] and ‘a guide which shall show them the best way to employ their time pleasantly with as little loss as possible’ [1]. With one of the authors a descendant of Peter Folger (island resident, poet and interpreter of the Native American Language in Nantucket in the seventeenth century), this handbook, digitized by AMD, starts with a historical discourse. It corrects the popular view that America was “discovered” by Christopher Columbus in `1492, and reminds its readers instead that in 985 already, an intrepid Norwegian explorer by the name of Bjrone Herjulfson reached Nantucket, centuries ahead of English captain Bartholomew Gosnold, who arrived in 1602. The famous 1659 sale of Nantucket, when its title holder, the missionary and merchant Thomas Mayhew, sold the island to a group of settlers ‘for and in consideration of the sum of Thirty Pounds – and also two beaver hats one for myself and one for my wife’ is not mentioned by Folger and Rich but the handbook is ahead of its time in recognising that ‘although the ten men had become owners of all the right and title to the island that the Crown could give them, yet they considered that the tribes of Indians who held possession were the true owners, so they commenced to treat with the various sachems, and shortly acquired, by purchase, a large part of the land from the natives’ [2].

Another famous Nantucket resident mentioned is Thomas Macy, ‘one man who obeyed the dictates of his own conscience at all hazards’ [3]. John Greenleaf Whittier whose famous 1841 poem describes the moment when Thomas Macy, having sheltered a Quaker in his Amesbury (Massachusetts) home in 1660, is denounced by the parish priest and decides to move his family to Nantucket: ‘God Bless the sea-beat island’, the poet John Greenleaf Whittier has Macy say in his 1841 poem The Exiles, ‘and grant forevermore/ that charity and freedom dwell / as now upon her shore’. 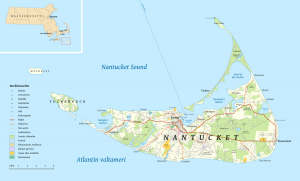 In subsequent chapters, readers of Folger and Rich’s handbook learn of Nantucket’s many defiant stances: from capital of the whaling industry to its position in the Independence War to the devastating fire of 1846. Refuting East Coast perceptions of Nantucket as a ’dead place’, the writers of the hand-book confirm that in 1878, ‘Nantucket is far from death. […] She is now commencing to furnish health for the weary summer sojourner who lingers on her shore’ [4]. Among the specific recommendations are the balmy temperatures, the bluefin-fishing and clam bakes on Tuckernuck Island, and, a little surprisingly, shipwreck-spotting. It all sounds idyllic, and J. Hector St John de Crèvecoeur’s 1787 Letters from an American Farmer are quoted as proof. This travel writer was convinced that ‘the Founders of Nantucket, animated by the same spirit of kindness and charity as those of Philadelphia, have always treated like brothers those whom they found on the Island: they still live together to-day in perfect peace; they are all one people; without being united by other ties than those of Society’ [5].

On a more light-hearted note, the handbook also includes a chapter by Porte Craton entitled A Siasconset Romance which recalls the conquests of the improbably named Mehetabel (Hetty) Fitgig, ‘the beauty and belle’ of the island who leaves her sailor sweetheart Abijah for a Boston chiropodist. Though this is a girl who ‘tossed, flirted and enjoyed her triumph to her silly heart’s content’ she is nonetheless there to support Abijah in the aftermath of a maritime disaster [6].

The advertisements included in the guide tell their own story: the Nantucket newspapers, the twice-daily boat service to neighbouring Martha’s Vineyard, mattresses and artificial teeth, ‘pure drugs and fancy goods’ are just some of the goods and services advertised. Far more than a whimsical or nostalgic piece of literature, Folger and Rich’s 1878 Handbook of Nantucket reminds us that Nantucket is more than summer get-away destination for stressed executives: it is at once a birthplace of history, a blend of cultures and beliefs, and above all a place that constantly reinvigorates and reinvents itself and those lucky enough to visit [7].

Beyoncé’s 'Lemonade': A Complex and Intersectional Exploration of Racial and Gendered Identity
The NED in Action: US Democracy Promotion in Chile and Nicaragua, 1988 – 1989
US History as Myth-Busting
Surviving a Long-Distance Research Project
American Studies in Europe: Interview with Francisco J. Rodríguez, University of Salamanca
Youth Politics and Dispelling the Image of The Terrible Turk with Selma Ekrem’s Autobiography, Unvei...
(Re)Constructing the Past in George Saunders’ “CivilWarLand in Bad Decline”
'Is It Because I’m Black?': The Music Industry, Image, and Politics in the Careers of Syl and Syleen...