My Archival Adventure as an Academic Researcher across the Atlantic

When I began my PhD in January 2013, I knew that a significant part of my research requires archival materials that are mostly based in the USA, in particular the renowned Beinecke Rare Book and Manuscript Library at Yale University. I will not lie; the opportunity to do archival work in the States and at Yale University was not only exciting and inspiring but also unbelievably unreal.

As this was my first time going to the States, and being an international student the first and most important step was obtaining a visa! If you are required to have a visa, the best advice is to apply for it as early as possible, in order to avoid any problems or delays and have all your documents prepared so that your application is reviewed faster.

I thought I had done all the necessary steps prior to my trip; however, I had a moment of panic when I found out that the library had begun major renovations for the 2014-2015 academic year meaning the archive would be closed and the materials and papers would be unavailable. This was bad news, very bad news. You have to understand, the Beinecke archive is my primary source, so not to have access to it after all the planning I had done, left me without air for a few seconds. However, I found an e-mail contact through the website and got in touch with the staff at the archive who reassured me that they had reading rooms for researchers and that I would need to pre-order my boxes two days before my visit. One word of advice: communicate with the archive staff before your visit and make sure you can use their facilities, because you save yourself from having a panic attack or worse.

One of the Beinecke Rare Book and Manuscript Library’s major collections is the American Literature and History collection that holds—significantly important to my own PhD research—the James Weldon Johnson (JWJ) collection. Carl Van Vechten founded this collection in 1941 in honor of his friend, James Weldon Johnson, who tragically died in a car accident in 1938. The collection holds a variety of books, manuscripts, and memorabilia donated by African American writers and artists to the Beinecke Rare Book and Manuscript Library such as James Baldwin, Richard Wright, Claude McKay, and Langston Hughes.

Since the focus of my PhD is to understand the details of African American poet/writer Langston Hughes’ literary and social networks, the JWJ collection is an essential source. The Langston Hughes papers consist of 670 boxes together storing over 15,000 letters, photographs, journals, and manuscripts. Hughes was an avid letter writer and a significant part of the collection is his letters. Examining the letters would assist me in finding the connection between his interactions with various individuals and organizations.

From New York to New Haven

After completing all the required pre-travel steps, I boarded a plane from Heathrow on June 16th, headed first to Newark International airport and from there to New Haven, Connecticut. You would think having travelled my whole life around the globe, I would be a pro, but I just do not like flying, so thank god for whoever created unlimited entertainment on planes. Newark, New Jersey was my first contact with the States and to say that it was the greatest would be a lie. However, after the long journey I arrived in New Haven at 9:00 pm local time (I left Brighton 4:00 am local time, so technically I had travelled 24 hours).

New Haven is an amazing city. It is located on New Haven Harbor and comprises part of the New York metropolitan area. It is the second largest city in Connecticut and is widely known as the home of the Ivy League school, Yale University. However, despite Yale University’s popularity as a tourist attraction, once you arrive in New Haven you are blown away with the history of the city’s many amazing architectural buildings. Historically, New Haven was called Quinnipiac, after the Native American tribe that lived there but after the Europeans arrived and settled there it was changed to New Haven in 1640.

Interestingly, I stayed at the Q club (Quinnipiak Club) which was a lovely classic Georgian private clubhouse transformed into an accommodation facility[1]. Built in 1931, the club has kept its antique style and combined it with some modern touches making it a pleasant and comfortable place to stay. 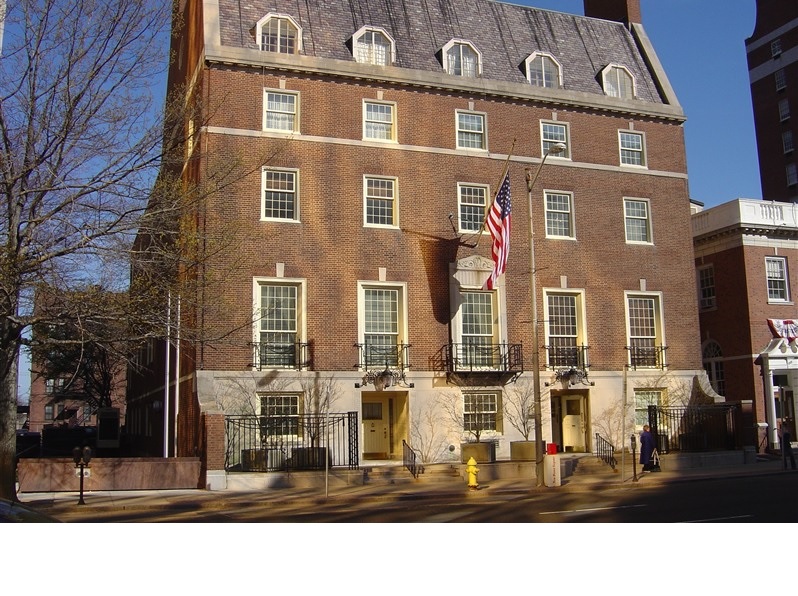 Having only a month to discover not only the Beinecke Rare Book and Manuscript Library but also the city, I acted fast. New Haven has many architectural landmarks that date back to important historical periods in American history. Every corner that I turned revealed a church with its own, mostly European, architectural style, while historic Orange Street consists of beautiful houses and buildings dating back to the 18th century. In the center of the city is the New Haven Green, a National Historic Landmark, home to three churches, one 17th century crypt, and several ghost stories.

The Yale University visitor center gives daily tours around the Old Yale Campus and show the dormitories, academic buildings, and chapels, accompanied by some interesting stories, which really helped me familiarise myself with the campus. Tour highlights included the Theodore Dwight Woolsey statue, a Yale graduate and president for 25 years, which has a golden toe that visitors and students rub for good luck. 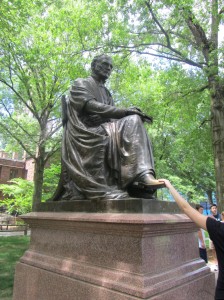 Another stop on the tour was the very tall and majestic Harkness tower located in the old campus. The tower, which contains 284 steps and 108 bells, was built as a memorial for Charles William Harkness, a Yale graduate and son of Anne M. Harkness who donated it to Yale in 1922. Other amazing buildings that caught the eye were the Sterling Memorial Library and my home for the month, Beinecke Rare Book and Manuscript Library. 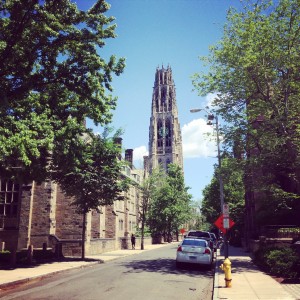 Located on the other side of the old campus, the Sterling Memorial, holds over 4 million volumes of books and is the main library in the Yale University library system. A tunnel connects it with the underground Bass Library, which holds another 150, 000 books. Unfortunately, the Sterling Memorial was under construction, so I will have to wait until my next trip to see the inside. 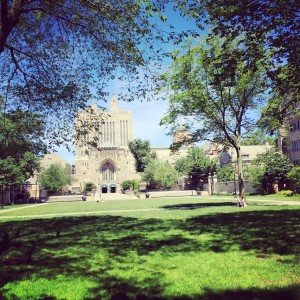 Getting down to research

Lastly, the Beinecke Rare Book and Manuscript Library. The archive is one of the largest buildings in the world that is entirely devoted to rare books and manuscripts. It opened in 1963 and was a gift from the Beinecke family (Edwin J. Beinecke, Yale 1907; Frederick W. Beinecke, Yale 1909s; Walter Beinecke, Yale 1910). The building is an architectural beauty from both outside and inside. Designed by Gordon Bunshaft, it has no windows, instead the rectangular structure consists of walls that are made of translucent marble panes that subdue the amount of light that comes into the building and thus help restore and maintain the books inside.

The Beinecke Rare Book and Manuscript Library holds large and various volumes of materials that range from Ancient Egyptian fragments to the diaries of modern day artists. The collections are extensive and important. I had never seen such a magnificent archive before; it took me a few moments to adjust to the spectacular structure before me. Stacks of ancient and precious books arranged in six levels and shining; if only it was not restricted to Beinecke staff, I would have loved to walk through those bookshelves. After traveling thousands of miles and adjusting to the beautiful location that I would be working in, I could not wait to get started. I had one month to indulge in as much of the papers that I could, so you could say I pretty much lived at Beinecke Rare Book and Manuscript Library. 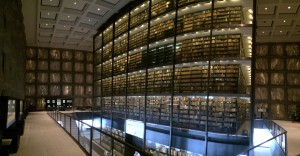 The opportunity to look through a writer that I had admired since my undergraduate poetry class felt unreal. It was as if I was in a dream the whole time I was there. I developed a significant amount of knowledge and insight about Hughes and his works. I guess that is part of the experience of doing archival work on a writer because you get a first hand glimpse at their personal life. You see their handwritings, their diaries, and photographs and you begin to paint a picture of their lives and their work ethics in your mind. I was worried about not being prepared or not having questions to begin my search for clues but I ended up coming back with a laptop full of material. Having access to Hughes’ letters made it possible to question the characteristics of each of his interactions, whether it was professional or personal? How each correspondence influenced his career? And how Hughes initiated his connection within various social and literary circles? One of the best aspects of the Beinecke Rare Book and Manuscript Library’s archive is that you could take photos of the materials. As I had only a month and lots to look through, this was very helpful.

One of the exciting parts of looking through Langston Hughes’s papers was coming across his photographs, which consisted of some powerful images of the working classes he took on his trips to Russia, Mexico, and Cuba. As photography is a hobby of mine, finding out that Hughes was also an enthusiast made me feel like we connected in some way. The photographs presented me with another side of Hughes and combined with the letters and journals that I was looking through. I found myself admiring him more than ever, mostly for his courage as an African American poet in pre-Civil Rights America struggling to make ends meet with the only tool he had, his writing.

Finally, the greatest thing about doing archival work in New Haven was that it was only two hours away from New York. So on my second weekend I bought my train ticket and with Billy Joel’s “New York State of Mind”, Alicia Keys’ “Empire State of Mind” and Frank Sinatra’s “New York, New York” on repeat on my IPod, I finally visited one of the cities that I had wanted to see since I was 14. Already in love with this city, to be there, walk around the city, and to stand in Times Square was a dream come true. An additional bonus was getting to visit Langston Hughes’ house in Harlem, which he bought in the 1940s. I would say this, once you go to New York, you do not want to leave! 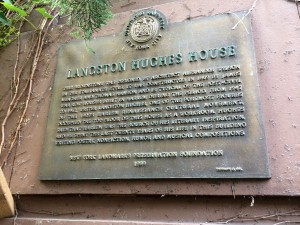 Overall, this trip was not only academically important but also personally a turning point in my life. Looking back at my experience, I can only write positively and nostalgically. I miss New Haven and I miss being in the reading room and going through boxes of letters and photos. Weird as it might sound, I also miss the large American food portions, which I first came to experience eating at the famous New Haven Pizza place called Frank Pepe Pizzeria (known as Pepe Pizza).

Although it has not been long since I have come back from my archival trip, I am already hoping to get another opportunity to go back and learn more. Until this trip, I had not appreciated the significance of archives but now I know from my experience that they are essential; they hold the key, sometimes, to unlocking the secrets behind individual figures and histories.

[1] Douglas Orr, an American architect who was born and resided in New Haven, designed the Q club.

Shima is a second year International PhD Student in American Studies at Sussex University, UK. Her thesis focuses on "Langston Hughes' Social, Literary, Political, and International Networks". She is studying and exploring the relationship between the various networks that Hughes interacted with and the influence that they placed on his career.
View all posts by Shima Jalal Kamali →
Tagged  African American Culture, C20, C21, Contemporary Fiction, Transatlantic, Transnationalism, Women's Writing.
Bookmark the permalink.