Since the 1950’s and the emergence of the post-war suburban housewife demographic embodied by Mamie Eisenhower and Pat Nixon, first ladies have been identified as a national matriarchal figurehead, often reinforcing stereotypical gender roles. Despite the notion of the traditional housewife now being largely outdated, the 2020 election has been dubbed ‘the story of suburban women,’ and the rhetoric of motherhood and family values has become perhaps the most important aspect of how first lady candidates have related to the American voter.[i] However, the choice facing the electorate could hardly be more different in 2020: Whilst ex-model Melania Trump attained fame for her ‘Sex at 30,000ft’ centrefold for GQ magazine, Jill Biden has devoted her professional career to education as an associate professor at NOVA and has a track record of public service as Second Lady under the Obama administration. Given the defection of suburban women voters from the Republicans to the Democrats in the 2018 midterms, with 59% of women voting Democrat as opposed to just 49% in 2016, it is clear that given the roughly 10-15% margin in the polls between candidates (as of 15 October 2020), the stakes for winning the female swing vote are high. 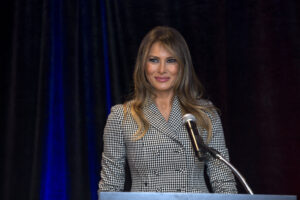 First Lady Melania Trump reacts to applause during her speech to US team families and competitors in the 2017 Invictus Games in Toronto, Canada Sept. 23, 2017. (DoD photo by EJ Hersom)

First lady rhetoric has often confirmed traditional heteronormative gender roles, with MaryAnne Borelli arguing that since “the president is expected to epitomise a masculine ideal of strength,” the first lady likewise became expected to be the counterpart feminine ideal, in which motherhood would naturally be central.[ii] On first glance, one is struck by the similarity between Biden’s DNC speech and Trump’s RNC speech, since both women employed their family as a rhetorical microcosm to represent American society at large: both appealed to voters from the viewpoint of a mother, seeking to protect not only her own family, but also the nation as a family in the broader sense. Likewise, both women reinforced their role as mothers, aiming to relate to other parents across the country, with Trump stating that ‘like every parent in this country, I feel there is (sic) so many lessons to teach our son,’[iii] and Biden identifying herself in a tricolon ‘as a mother and a grandmother, as an American,’ directly linking her familial identity to her national identity.[iv] Journalists praised Trump for her speech, in contrast to the overtly aggressive appeals by other members of the Trump family during the rest of the convention, with The New Yorker describing her as ‘a kind of maternal foil to the rest of the R.N.C’s overactive bombast.’[v] Biden was also identified in the press as speaking from the viewpoint of ‘a teacher, a mother and a wife,’ with her well-honed message of familial reconciliation and endurance being well integrated with the values of the Biden campaign and their broader vision for American reconciliation and a return to normalcy.[vi]

Although both women focus on similar subjects in their rhetoric, they project alternate conceptions of motherhood and family values, along with different tones: Whilst Melania Trump’s rhetoric did set her apart from the rest of the Trump family’s rhetorical performances at the RNC, particularly in how measured her delivery was in comparison, her use of the rhetorical themes of motherhood and the American family were of a far more combative tone than Biden’s. Melania Trump largely espoused the idea that the traditional family is under threat, in line with one of the key messages of the Trump campaign that they will defend conservative, suburban America and protect law and order. Nowhere is this more plainly highlighted than in her call to arms, in which she declares: ‘to mothers and parents everywhere, you are warriors.’[vii] Trump also goes on to plead her husband’s case by stating that ‘Donald wants to keep your family safe.’[viii] Despite her reported ‘subdued manner’ of delivery, Trump clearly portrays her husband as the candidate to protect the traditional American family, especially when considering her speech against the backdrop of a campaign that has branded a vote for the Democrats as a vote for ‘radical socialism and the destruction of the American Dream.’[ix] 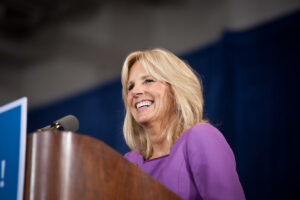 “Joe and Jill Biden in Lancaster – November 4th” by Barack Obama is licensed under CC BY-NC-SA 2.0

In contrast, Biden’s utilisation of the trope of the family is in the hope of persuading voters that reconciliation in a polarised America is achievable with her husband as president. Biden’s immensely personal speech touched on the loss of their son Beau, which left her wondering ‘if I would ever smile or feel joy again,’ relating to how many American’s will be feeling in the wake of the pandemic.[x] Biden took the audience back by recalling how she and Joe Biden shared the load at home as she studied for graduate school whilst he put their children to bed, before drawing these memories and experiences to a head by asking: ‘how do you make a broken family whole? The same way you make a nation whole.’[xi] This rhetorical question and use of epistrophe reinforced the notion that the Biden campaign seeks to reconcile and heal a polarised American society, in a similar way that they reconciled a broken family, as the story of their marriage attests. Commentators noted how ‘her more intimate personal story struck a chord in a way other politicians haven’t,’[xii] and widely regarded it as a ‘moving scene, in all senses.’[xiii]

The way in which the idea of the family and motherhood has been exploited in political rhetoric by first lady candidates during the 2020 election has been emotionally charged, with the stakes especially high given the focus during this election of the swing of suburban women between parties. Ultimately, the rhetoric of first lady candidates presented a clear choice and a fundamental difference between a candidate who preaches protectionism and another who pleads for reconciliation. Whilst we can analyse rhetoric and make predictions based on past events, the craft of historians is in the reflection on the past and not the prediction of the future, and so it remains to be seen as to how effective these maternal appeals may have been in guiding women one way or another to the polls in November.

[vi] Maureen Groppe, ‘He does it for you”; Jill Biden gives personal speech as her Husband receives DNC nomination, USA Today, August 19, 2020,https://eu.usatoday.com/story/news/politics/elections/2020/08/18/jill-biden-speech-dnc-convention-joe-biden-nomination/3396871001/

War Among All Puerto Ricans: The Nationalist Revolt and the Creation of the Estado Libre Asociado of...
Teaching U.S Women’s History in British Universities: a Personal and Political History
"Do Not Forget your Dying King": Oliver Stone's JFK and Popular Memory
Queer Clout – Chicago and the Rise of Gay Politics by Timothy Stewart-Winter
The United States Christian Commission and the Civil War Dead
“When We Knew No North Or South”: Veterans of the U.S.-Mexican War at the 1876 Centennial
60 Seconds With Peter Molin
Black History Month Post: ‘All Englishmen Were Not Shakespeares’: William Craft’s Attack on Scienti...

Elizabeth Rees is a postgraduate undertaking her DPhil in History at the University of Oxford. Under the supervision of Adam Smith and Stephen Tuffnell, she joined the postgraduate community at the Rothermere American Institute in 2020 to investigate the political role of First Ladies during the 1960s and 1970s, considering aspects of APD and second wave feminism. She received a distinction for her MA in United States Studies at UCL under the supervision of Iwan Morgan. Elizabeth's dissertation investigated the rhetoric of political outsiders looking at the cases of Jimmy Carter, Ronald Reagan and Donald Trump, and she was awarded a UCL Institute of the America's travel grant to undertake her research at the Carter and Reagan libraries in Atlanta and Simi Valley. As part of the Americas Institute Research Network, Elizabeth contributed to the social media coverage and organisation of the 2019 conference, as well as chairing a panel on urban development in Latin America. Her research interests include second wave feminism, American history on film, political rhetoric, and the Carter administration, outside of her interest in First Ladies. She also runs a podcast, FLOTUS podcast, in her spare time.
View all posts by Elizabeth Rees →
Tagged  Election Series 2020, Politics.
Bookmark the permalink.