Meet the Curator: ‘Show Me the Money: The Image of Finance, 1700 to the Present’

‘Show Me the Money: The Image of Finance, 1700 to the Present’ is a touring exhibition dedicated to mapping everything financial. It features images, illustrations, and visual media alike to give the visitor an altogether different and poignant impression of a little thing we call ‘money’.  With the exhibition currently in the middle of its four-stop tour, USSO interviews Dr Paul Crosthwaite, one of the three academic investigators on the project.

Firstly, thank you for taking the time to talk to us at such a busy juncture in your calendar! Please tell us about ‘Show Me the Money: The Image of Finance, 1700 to the Present’.  Is this the first exhibition you have been involved with?

Yes, and for someone who works predominantly with texts (and seldom valuable ones), it was eye-opening to see the logistics involved in dealing with what are often rare and expensive objects: negotiating loans with museums, galleries, libraries, and private collectors; arranging transportation, insurance, and storage; ensuring that pieces are appropriately and safely displayed; and so on. It’s been a really interesting mixture of the intellectual and the practical.

How does the exhibition engage with your area of research?

The three academic investigators on the project – Peter Knight at Manchester, Nicky Marsh at Southampton, and I – are all writing books on the cultural history of financial markets in (predominantly) the United States, in periods ranging from the late nineteenth century (Peter) to the 1970s (Nicky) to the present (me). Though our work is mainly literary in focus, we felt that there was scope for an exhibition showcasing the rich and varied visual culture of finance. In this effort, we’ve been fortunate in collaborating with Isabella Streffen, the post-doc on the project, whose research is closely concerned with the social and political implications of contemporary art, and Alistair Robinson, the Director of the Northern Gallery for Contemporary Art (NGCA) in Sunderland, who’s built a reputation for historically engaged exhibitions like ‘Rank: Picturing the Social Order, 1516-2009’.

Did you personally have to push any particular piece(s) to be included in the exhibition?

I was particularly keen to include William Powhida’s ‘Griftopia’, a drawing – based on Matt Taibbi’s muckraking exposé of the same name – which links up the various architects of the neoliberal insurgency in the US: at the centre sits the former Chairman of the Federal Reserve, Alan Greenspan, labelled ‘The Biggest Asshole in the Universe’. It’s a scurrilous, in-your-face piece, but there’s also subtlety and sophistication in the way Powhida tries to find a visual language to capture the dizzyingly complex networks of influence that shape contemporary politics and economics.

How long did the exhibition take from concept to installation?

Peter, Nicky, and I initially conceived the idea back in 2011 and were awarded funding for the exhibition by the AHRC in the summer of 2012. The funding was solely for a run at the NGCA (where the exhibition opened in June 2014), but we’ve been able to extend the project in the form of a tour to the Chawton House Library in Hampshire, the John Hansard Gallery in Southampton, and the People’s History Museum in Manchester, where the exhibition will finally close in January 2016. By that point, it will have been quite a long-lived project, but another thing I’ve learned about exhibitions is just how much planning they require; if anything, it would have been good to have had even more of a run-in before the initial opening, just so that things might have been slightly less frenetic!

The exhibition is travelling to the Northern Gallery for Contemporary Art, the John Hansard Gallery, Chawton House Library, People’s History Museum in Manchester. What is significant about each location? 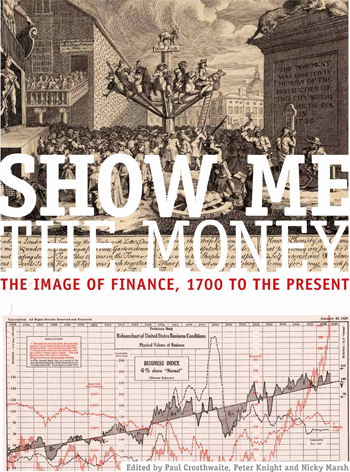 ‘Show me the Money: The Image of Finance, 1700 to the Present’ is accompanied by a fully illustrated book, edited by Peter Knight, Nicky Marsh and Paul Crosthwaite.

We always hoped that it’d be possible for the exhibition to tour, so as to make this fascinating body of material available to as many people as possible, and we’re delighted to have achieved that. We’re also very pleased that the locations in which the exhibition is showing speak to its themes in diverse ways. Sunderland, home of the NGCA, for example, is located close to one of the iconic casualties of the credit crunch, Newcastle-based Northern Rock (which merged with Sunderland’s North of England Building Society in 1994 and operated offices in the city). Sunderland is also a place hit by the abandonment of various grand redevelopment projects in the wake of the financial downturn.Chawton House Library, once the property of Jane Austen’s family, is in Alton, Hampshire, where Austen’s brother was involved in the failure of the local bank (whose losses included the £13 profit from Mansfield Parkand where the Governor of the Bank of England, Mark Carney, recently unveiled Austen as the new face of the £10 note. Southampton, where the John Hansard Gallery is situated, has long been the focus of speculative ventures relating to its importance as a major port. Meanwhile, Manchester, site of the People’s History Museum, has its own distinctive place in the financial history of Britain, from the investment manias and working class struggles that marked the city’s industrial development to the recent troubles at the Co-operative Bank. We’ve made use of local sources at each of the venues in order to try to draw out these resonances.

Considering the nature of the exhibition, how did you decide upon its layout ?

The exhibition space at the NGCA was divided up using five themes: ‘Debt and Credit’, ‘Framing Finance’, ‘Animal Spirits’, ‘The Money Shot’, and ‘Booms and Busts’. This model allowed us to trace recurrent ideas and motifs over time and allowed for some really striking juxtapositions, whether it be a James Gillray print beside a Molly Crabapple painting, or a nineteenth-century magazine illustration close to a twenty-first-century installation. When it came to the actual positioning and installation of the works, Peter, Nicky, and I very much deferred to the expert curators, Isabella and Alistair. This video gives a sense of the exceptionally skilful way in which they were able to make use of the exhibition space. This knack for visualizing how diverse objects will relate to one another in situ is something I’ve been really impressed by in working with the curatorial team at the NGCA.

In addition to tackling the exhibition’s logistics, it also seems like you have embraced interactivity by creating an app specifically for the exhibition. How important to you is the use of technology in gallery spaces? 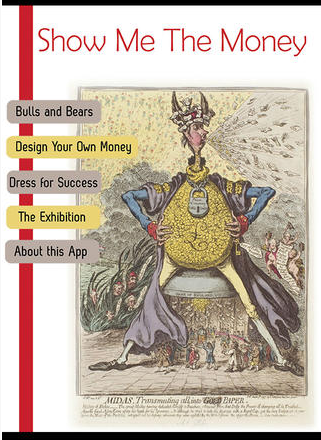 The free app, ‘Show Me the Money’ accompanies the exhibition.

The app is designed to enhance a visit to the exhibition, but its main purpose is to extend the reach of the project beyond the gallery walls. Aimed at children and adults alike, the app allows users to create their own bank notes, test their nerve in a stock market investment game, and design outrageous outfits like those worn by pro traders on the floors of futures exchanges. It also provides extensive background information about the exhibition and its themes. The idea behind the app is to offer a fun and accessible means of conveying the key ideas of the exhibition to as wide an audience as possible. We’re delighted that the app has been used in schools, but also that adult users report becoming compulsive players of the stock trading game, ‘Bulls and Bears’, and have been amusing one another with their bank note and trading jacket designs!

The website’s blurb notes that the exhibition, ‘shows how artists have grappled with the increasingly intangible nature of money and finance’. That app goes some way to approach this problematic, but ultimately does the materiality of the artwork conflict with the intangibility of the subject?

It’s not necessarily a conflict, but it is a tension – probably the central one of the exhibition in fact. Just about all of the artists, in their different ways, are trying to give some kind of visual embodiment to financial instruments and processes that often can’t be seen or touched. So they turn to natural and animal imagery, or tropes of the monstrous or Gothic, or depictions of the gesticulating bodies of traders, or representations of the technologies used in trading, all in an attempt to reground finance in the materiality of things.

Finally, if you had to choose one piece that could be used as a standalone representation of Show Me the Money, which one would it be?

I would have to say one of the pieces commissioned for the exhibition: the digital mediawork ‘Black Narcissus’ by the London-based artists Matthew Cornford and David Cross. This exhibit is a great example of the use of natural imagery to deal with the intangibility of finance – something I mentioned earlier. 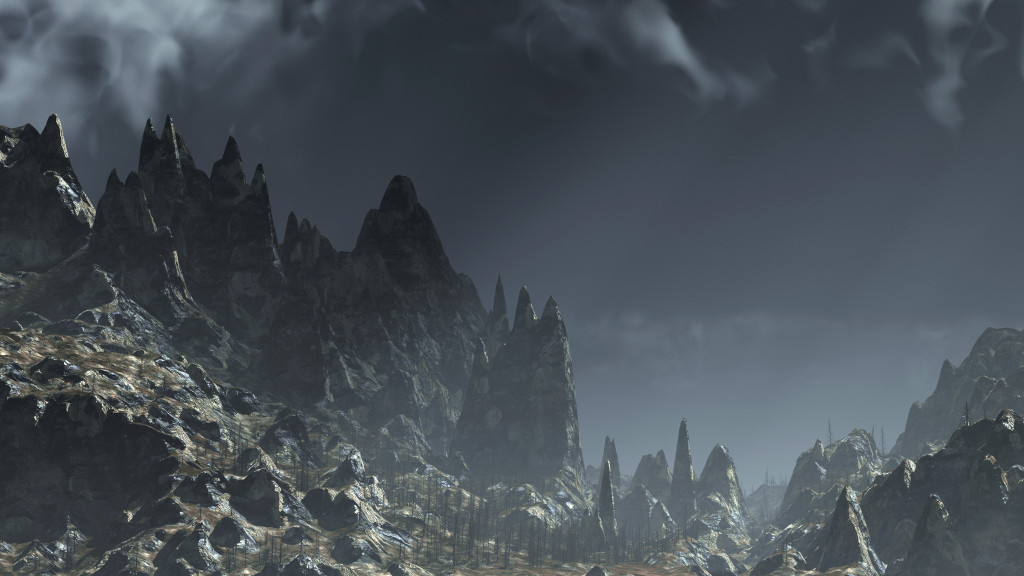 ‘Black Narcissus’ literalizes the oft-remarked resemblances between the jagged peaks and troughs of stock charts and the outlines of mountain ranges, tracking along a computer-generated mountain skyline mapped onto the historical undulations of the stock market in the period 2003-2013. In the still from the work here, the downward trend on the left hand side, culminating in the vertiginous drop in the centre, corresponds to the global financial crisis of 2008. In other words, the market quite literally falls off a cliff.

‘Show Me the Money: The Image of Finance, 1700 to the Present’ opened at the Northern Gallery for Contemporary Art in Sunderland in June 2014. It is showing in a split-site format at the Chawton House Library in Hampshire (19 September to 22 November 2014) and the John Hansard Gallery in Southampton (7 October to 22 November 2014). It then moves to the People’s History Museum in Manchester (11 July 2015 to 24 January 2016). Further information is available on the web site imageoffinance.com.

There is an accompanying book, published by Manchester University Press and edited by Peter Knight, Nicky Marsh and Paul Crosthwaite. In addition to chapters by the editors there are ‘think piece’ essays by significant financial commentators such as, Justin Fox, Executive Editor of the Harvard Business Review; Andy Haldane, Chief Economist at the Bank of England, and Bill Maurer, Director of the Institute for Money, Technology, and Financial Inclusion at UC Irvine (http://www.manchesteruniversitypress.co.uk/cgi-bin/indexer?product=9780719096259).

The exhibition app is available for free on iOS https://itunes.apple.com/gb/app/show-me-the-money/id879456771?mt=8&ign-mpt=uo%3D4 and Android https://play.google.com/store/apps/details?id=air.co.uk.shooflypublishing.NGCA.

Review: 'Poetry and Collaboration in the Age of Modernism' Conference
Book Review: Against Self-Reliance: The Arts of Dependence in the Early United States by William Hun...
Review: HOTCUS Annual Conference 2017
Review: 'Legacies and Lifespans: Contemporary Women’s Writing in the 21st Century'
Review: Marilynne Robinson Symposium
Queer Clout – Chicago and the Rise of Gay Politics by Timothy Stewart-Winter
Conference Review: ‘Women’s Transatlantic Prison Activism since 1960,’ the Rothermere American Insti...
For a Series so Concerned with Leaning into the Horror, The Handmaid’s Tale Utterly Fails to Address...

Paul Crosthwaite is a Lecturer in the Department of English Literature at the University of Edinburgh. He is currently completing a monograph entitled Speculative Investments: Finance, Feeling, and Representation in Contemporary Narrative. He tweets at @p_crosthwaite.
View all posts by Paul Crosthwaite →
Tagged  C20, Popular Culture, Visual Culture.
Bookmark the permalink.