Ties between Britain and the United States have long been conceptualised along the lines of a ‘special relationship’.  The public exhibition ‘Labour’s Special Relationship’ seeks to explore transatlantic ties between trade unionists and organised labour in Britain and the United States, often obscured by conventional myth-making about Anglo-American unity.  With the exhibition underway, USSO interviews Dr Steven Parfitt, who curated the exhibition in collaboration with the Trades Union Congress Library.

Please tell us a bit about the exhibition.  Is this the first exhibition that you’ve been involved in?

Labour’s Special Relationship is about the history of ties between the British and American labour movements, from the nineteenth century until today. This is an enormous topic. There have been so many examples of cooperation between British and American trade unionists over the years, and no hope of covering all of them in 20-something panels. So, I have tried to tell a coherent story that spans 200 years through a small number of examples – something I suppose that all historians have to do to some degree or other.

The exhibition starts with the early days of the ‘special relationship’ in the nineteenth century, and the important role that Britain played in the early development of the American labour movement (and vice versa). It then looks at how British and American trade unionists developed further ties during the world wars and the decades between them – how anti-war and pro-war trade unionists in both countries looked to each other for support and inspiration. Those relationships deepened during the period of the Cold War, when ideological struggles raged within the labour movements of both countries.

I especially wanted to make sure that the exhibition avoided one of the things that has long plagued union movements, and to some extent labour history as well. That is, the tendency to simply chart the growth of solidarity between white men and leave out everyone else. So, before the exhibition moves on to the Cold War, it looks at how women, people of colour, and LGBTQ people in the US and UK have developed their own connections and solidarity as part of this wider story. 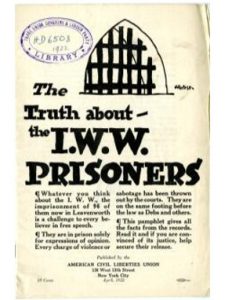 IWW Prisoners: This poster was sent to British trade unionists by the Industrial Workers of the World, protesting the imprisonment of IWW leaders for breaking the Espionage Act in the First World War.

Labour’s Special Relationship ends with the present day, and with some of the more heartening developments that have taken place in Britain and the United States, such as the Fight for $15, and the resurgence of left-wing politics in both countries. Naturally it also refers to the dangers posed by a resurgent right, in the form of right-wing Brexiteers and the vague movement (if we can call it that) around Trump.  So this exhibition is meant to be a prod to action as well as a narrative of ties between British and American labour.

And yes, this is the first exhibition that I have been involved in. Much of the credit has to go to Jeff Howarth, the TUC Librarian. After I finished my PhD I emailed the TUC to see if there was anything I could do to help, and they passed me on to Jeff, who suggested that we come up with an exhibition based on the sources available at the TUC Library.  Jeff kept the whole thing going, especially as I had to juggle work on this exhibition with a long period – about 3 years – of hourly-paid teaching. My advice to other people stuck in precarious work is that if they have the chance to work on an exhibition, go for it at once. It can be difficult to keep up morale on a diet of casual work. Working on this exhibition was one of the bright spots in an otherwise difficult period.

How does the exhibition engage with your area of research? 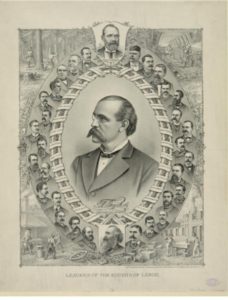 Knights of Labor: A panorama of American labour leaders in the mid-1880s.

The subject of this exhibition was a natural extension from my PhD and early postdoctoral research, which looked at the British career of an American working-class movement, the Noble and Holy Order of the Knights of Labor. The Knights became the first national movement of American workers in the 1880s, and their popularity was so great that they then spread around the world in the 1880s and 1890s. British and Irish workers were among the early converts to this unusual American Order, and more than 10,000 of them became Knights between 1882 and 1895.

As I examined this history I became more and more aware that it was part of a much wider and much longer story. For instance, just before the Knights expanded across the Atlantic (and then the Pacific), British unions such as the Amalgamated Societies of Engineers and of Carpenters and Joiners had already organised branches in the United States. In the 1870s some British and American unions seriously considered joining their forces in a single transatlantic organisation. So when I first got in touch with Jeff Howarth, the TUC Librarian, and he suggested the possibility of a public exhibition, the idea of looking at this wider and longer story seemed like the perfect way to combine my research with a wider story that might prove interesting to the public.

People often consider the phrase ‘special relationship’ to refer specifically to UK-US politics.  What was your reasoning for making use of this familiar phrase?

Partly to provoke, and partly to remind people that the ties between the British and American labour movements go back a long way.

I have my own doubts about whether the ‘special relationship’ is a useful concept in its normal guise anyways – it seems to be used a lot more in Britain than in the United States, and the sense of equality implied by the term seems to me very dubious as well. At least since Churchill and Roosevelt, the special relationship has meant the retreat of Britain from its old imperial role and the rise of the United States in its place, smoothed over with some lovely-sounding words about shared sacrifice in the world wars, and the ties of kinship and language that unite the two countries. 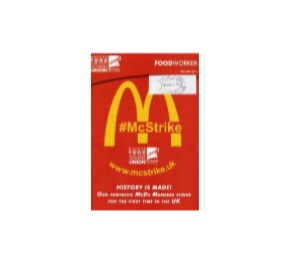 McStrike: The poster refers to the first strike by workers against a British McDonald’s outlet in 2017 – it was directly inspired by the strikes of American fastfood workers from 2013 onwards.

In some ways labour’s relationship has been closer and more equal. British emigrants to America helped to set up the first unions and were part of early attempts to build American labour parties. The American Federation of Labor took many of its early cues from the British Trades Union Congress, and British workers used to look to the United States as a democratic and republican alternative to their own aristocratic and undemocratic institutions. The AFL and TUC have swapped fraternal delegates ever since the end of the nineteenth century, and many campaigns – defending persecuted trade unionists, boycotting unfair employers, and assisting strikes in one or the other country – have crossed across the Atlantic.

This ‘special relationship’ is not an exclusive thing. Labour movements in both countries looked to other countries as well, when they looked beyond their own national borders at all. But it has survived for more than two centuries. Part of the point of the exhibition is to suggest that this story has not yet reached its end, and that British and American workers have much to learn from each other today. The struggles of American fast food workers, and other lowly-paid and precarious workers, are obvious examples that British workers can learn from. After the Bernie Sanders campaign, Americans who want to go further and build a new labour party might look to the British Labour Party as an example of what to imitate and what to avoid.

If you had to choose one piece to encapsulate Labour’s Special Relationship, what would it be?

It might not be the most visually striking image, but I would choose the picture of Emma Paterson. She was involved from an early age in the women’s suffrage movement, and was a crucial figure in the early development of female trade unionism in Britain during the 1870s and 1880s. She became one of the first female delegates to the Trades Union Congress, and she set up what became the Women’s Trade Union League. The League became a crucial centre for the organising of women trade unions in industries where the largely male unions of the TUC were not active, and Paterson fought for the inclusion of women into the trade union movement at a time when many of its male members and leaders still thought it best (and possible) to exclude women from the labour force altogether and thereby make it possible for the male head of the household to earn enough to support a whole family. Much of the thanks for the inclusion of women in the British labour movement comes from the work of pioneers like Emma Paterson.

The reason why Paterson is so important to this exhibition is that she exemplifies the possibilities of labour’s ‘special relationship’. The impetus to form the Women’s Trade Union League came from her observations of women-organised unions during her honeymoon to the United States in 1871. The British and American Women’s Trade Union Leagues stayed in close touch ever after and continued to advance the cause of female trade unionism well into the twentieth century. This process of imitation and learning from example has sadly not been the norm in labour’s “special relationship,” but when it has happened, as in Paterson’s case, the results have been impressive. So while her story might not encapsulate the whole of the exhibition – which is a record of failure as much as it is a celebration of victories and successes – it does encapsulate the promise of greater cooperation between the British 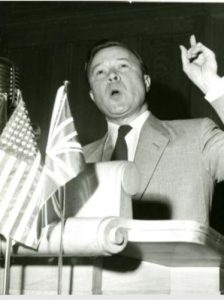 and American labour movements. Given the current political climate in both countries, this promise is now more necessary than ever.

Where will people be able to view the exhibition?

This is still a work in progress. The first location for this exhibition will be the Working-Class Movement Library in Manchester, where it will stay from February 21 to April 20. After that, it will start to tour other places in the UK (these are still being finalised). A digital copy will also travel across to the US and (possibly) to France at well.

But we are still interested in having additional places host the institution. If you think that you or your institution might want to host the exhibition, please get in touch with Jeff Howarth, TUC Librarian, at j.howarth[at]londonmet.ac.uk.

Steven Parfitt is a Teaching Fellow in History at Loughborough University. He is the author of Knights Across the Atlantic: The Knights of Labor in Britain and Ireland, with Liverpool University Press, and has edited Working-Class Nationalism and Internationalism: Essays in Global History. He has written more than a dozen journal articles and book chapters on British, American and global history, and writes occasionally for Jacobin, the Guardian, and TheConversation.com.
View all posts by Steven Parfitt →
Tagged  Labour Movements, Special Relationship, Trade Unions, Trades Union Congress Library, Transatlantic Exchange, Working-Class History, Working-Class Movements Library.
Bookmark the permalink.