May Day and the future of workers’ internationalism

Notes from “Workers of all lands unite?” conference, 7th March 2015

By Lorenzo Costaguta and Steven Parfitt

Almost 130 years ago, on May 1, 1886, hundreds of thousands of American workers responded to the call of a defunct organisation, the Federation of Organized Trades and Labor Unions, for a general strike demanding the eight hour working day. Three days later, an unknown person threw a bomb at police during a protest in Chicago’s Haymarket Square. Eight anarchists were accused and convicted of conspiracy for that act. Four of them were eventually hanged, two were sentenced to death and had the sentence commuted, another committed suicide in prison and the eighth was given 15 years in jail. The Haymarket martyrs, as they became known, won wide sympathy for what was often seen as a colossal miscarriage of justice and an international campaign to secure their acquittal began. When the American Federation of Labor set May 1, 1890, as the date for renewed efforts to gain the eight hour day, they gained worldwide support from socialists, anarchists and trade unionists, many of whom had defended the Haymarket martyrs, and who marched in their millions on that day in all parts of the globe.

The idea of May 1, May Day, as a day celebrating international labour solidarity was born. From then, until now, men and women across the world have tried, with varying degrees of success, to maintain that tradition and uphold the principle that underlies it. However, that task seems more difficult than ever. The American labour movement actually organised a greater proportion of workers in May 1886 than it does today, and similar reverses have taken place in most of the so-called developed world. In the rest of the world trade unions have often scored major successes – most recently, playing a major role in the downfall of the Egyptian dictator Hosni Mubarak – but they have found it difficult to match the power of the global corporations that roam the world in search of cheap labour and amenable political clients. International migration, for all its many benefits, has often complicated efforts to unite workers in different countries against the power of global capital. 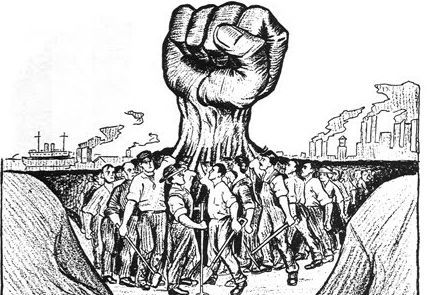 These challenges were at the centre of the event “Workers of all lands unite? Working class nationalism and internationalism until 1945,” a conference organized by the Department of History and the Department of American and Canadian Studies at the University of Nottingham last March 7th, 2015, with the support of the Economic History Society. After a cursory glance at the programme, with academics from universities all over Europe delivering papers concerning the period before the Second World War, one could imagine the concepts of nationalism and internationalism as once major but now extinguished forces that shaped the past of working class movements. As the keynote address delivered by Dan Gallin made clear, however, this is hardly the case. As a militant of the International Union of Food Workers and now Chair of the Global Labour Institute, Gallin has been an active member of the international workers’ movement for more than fifty years. His speech, which spanned from the life and thought of the Dutch activist Edo Finmen to the recent political problems of the biggest international union of the world, the International Trade Union Confederation, was devoted to showing “how nationalism can creep into the labour movement and destroy its ideological substance.” In the words of Gallin, nationalism became the enemy to fight on the road to improve workers’ rights. From the First World War, to the Stalinist idea of “socialism in one country” and the 1973 creation of a neo-nationalist European Trade Unions Confederation, nationalist sentiments, argued Gallin, generally disrupted plans for inter-class, inter-ethnic and inter-racial emancipation.

The papers presented during the conference did not always support Gallin’s conclusions, however. Several argued that nationalism, in specific contexts, worked as a fundamental progressive impulse against conservative and reactionary forces. Susan Garrard’s (University of St. Andrews) paper, for example, discussed how Giuseppe Garibaldi, protagonist of the Italian nationalist movement, represented a model for the female Scottish working class, activating sentiments that contested the dominant framework of male British nationalism. Elsewhere, Musab Younis (University of Oxford) explained that black nationalism contributed to the advancement of African American movements in the US between 1919 and 1939. Finally, Brian Casey (University College Dublin) unveiled the role of nationalism in the construction of political consciousness amongst the lower classes in the west of Ireland in the 1870s. Other papers fell more in line with the point against nationalism made by Gallin, for example Nikos Potamianos’s (Independent researcher) presentation concerning the use of “Greekness” as a way to exclude foreign workers from Athens’s harbour in the 1910s, or Ivan Jelicic’s (University of Trieste) paper on the difficulties of building a socialist movement in Fiume, where divisions were prominent due to the town being a crossroad of different cultures and nationalities. The other, equally impressive contributions, spanning every continent and dealing with a wide range of historical actors, fleshed out these points of view still further.

The final roundtable drew on historical experience in order to focus on the great question that faces us today: what needs to be done now? The panel, composed by Drew Allison (University of York), Dan Gallin (Global Labour Institute), Christopher Phelps (University of Nottingham) and Chris Wrigley (University of Nottingham) and chaired by the former Labor Notes editor (and member of the conference committee) Kim Moody, rapidly found an agreement on some key points. First of all, workers, now more than ever, need an international movement, one that can tackle the issues raised by a globalized system of production. Secondly, this movement must be a trade union (not a political party), because political parties are too structurally connected to national-based problematics. Thirdly, even if it is a trade union, this movement must have a political agenda, one that is not only defending the narrow interests of its members, but also addressing the problems that plague workers on an international level. On these premises, the discussion moved on well beyond the scheduled time. Indeed, debates about these questions went on well into the night, at the wine reception and the conference dinner that followed it.

As we prepare to celebrate another May Day, nearly 130 years after so many workers from all over the world first claimed that day as their own, the “Workers of All Lands Unite?” conference proved at the very least that the international labour movement still attracts fine scholarship from all parts of the globe. As for that movement today, the words of one venerable saying sum it up best – there’s still life in the old dog yet.

“Workers of all lands unite?” was organised by Lorenzo Costaguta, Matthew Kidd, Kim Moody, Steven Parfitt and John Tiplady, a team of scholars at the University of Nottingham.

Information and the full programme of the conference can be found here. A group of the papers presented during the event will be published into a volume, edited by some members of the Conference Committee. All the information relative to forthcoming publication will be available on their website. [starbox][starbox id=”Steven Parfitt”]

Review: Joint BrANCH and HOTCUS Annual Conference
Book Review: The Republican Party and the War on Poverty: 1964-1981 by Mark McLay
60 Seconds With Jenny Terry
Book Review: John Dos Passos’s Transatlantic Chronicling: Critical Essays on the Interwar Years.
God and the Revolution: Christianity, the South, and the Communist Party of the USA
Silence = Death: Podcasting the history of the AIDS Crisis
Counterpublics and the New Dynamics of Contemporary Conservatism: From the Tea Party to the Trump Mo...
Review: HOTCUS Postgraduate Conference, 'Crossing Boundaries: Challenging American Norms During the ...

Lorenzo Costaguta is a PhD Candidate at the University of Nottingham. He works on socialism in the United States in late nineteenth century, with a specific focus on ideas of race and ethnicity. He holds an MA in History from the University of Turin and an MSc in Political Theory from LSE. He is an Articles Editor for 49th Parallel, an Interdisciplinary Journal of North American Studies and Associate Editor for the Italian blog www.ceraunavoltalamerica.it.
View all posts by Lorenzo Costaguta →
Tagged  American Working Class, C19, C20, C21, Europe, Labour, Politics, Transatlantic, Transnationalism.
Bookmark the permalink.