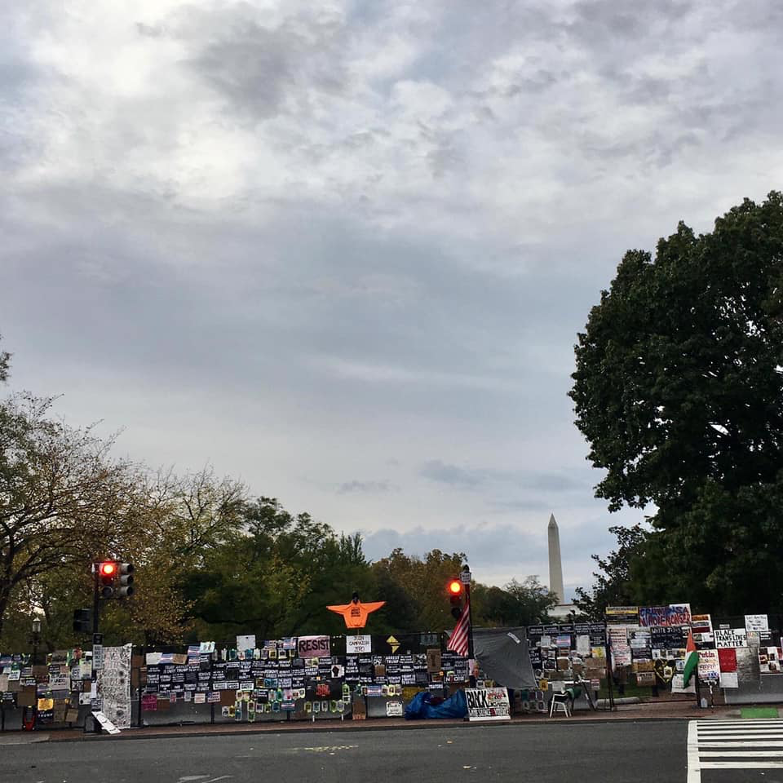 In the early evening of Monday, 1 June 2020, following a weekend of national protests against the extra-judicial killings of Black people by the police, US federal troops aggressively moved on demonstrators outside the White House in Washington, DC.[1] Using flashbangs and chemical weapons, the US military forced demonstrators from the grounds of Lafayette Square Park, clearing the way for President Donald J. Trump to walk through the park and cross the street, so that he could have his photograph taken in front of St. John’s Episcopal Church whilst holding a Bible upside-down. 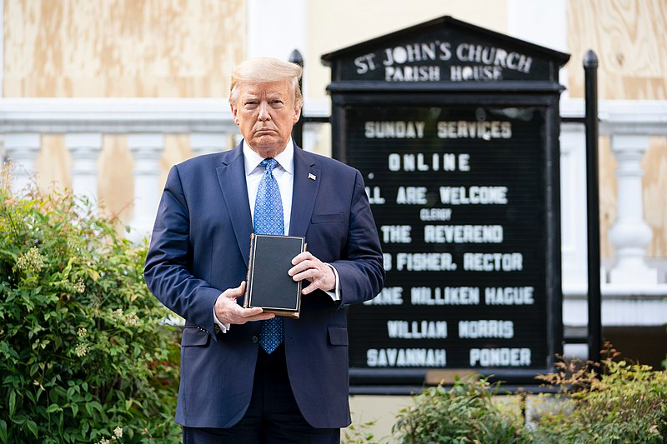 The following day, temporary non-scalable chain-link fencing was installed around the perimeter of the park—both physically and symbolically separating the populace from the President’s residence. The original fencing and concrete barricades were removed within weeks, only to be re-installed later that month, following protesters’ failed attempt to topple a statue of Andrew Jackson within the park.[2] As of this writing, six months later, the fencing remains.

The fence exists in a space that has, historically, been a site of various protests.[3] In his plans for the city, Pierre Charles L’Enfant, the French-American military engineer who designed Dc, referred to Lafayette Square Park as “The President’s Park,” situated as it is on H Street, directly opposite the north side of the White House—commonly referred to as “The People’s House.”

Shortly after its first installation, the Lafayette Square Park fence was reclaimed as a Black Lives Matter (BLM) “do-it-yourself gallery of protest art.”[4] Largely thanks to the efforts of Nadine Seiler—its unofficial curator—the display has endured, and the surfaces of the fence remain covered with messages, artwork, and images commemorating the lives of Black men and women killed by state-sanctioned violence.[5] 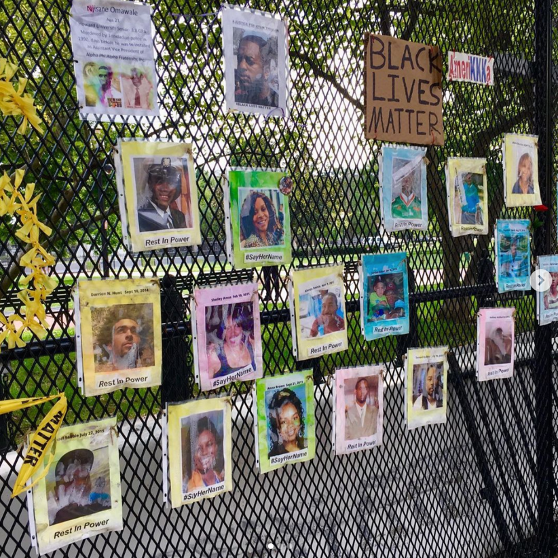 The fencing will likely remain for the duration of the Trump presidency, and it warrants critical attention as a powerful national memorial honoring Black lives. In this essay, I’ll begin by closely examining the memorial itself, and then situate it within a broader commemorative tradition of formal and informal, permanent and ephemeral American memorialization. The memorial fence is not a stable entity, but rather an improvisational, ongoing display—subject to the whims and degradations of the weather as well as repeated vandalization.[6] 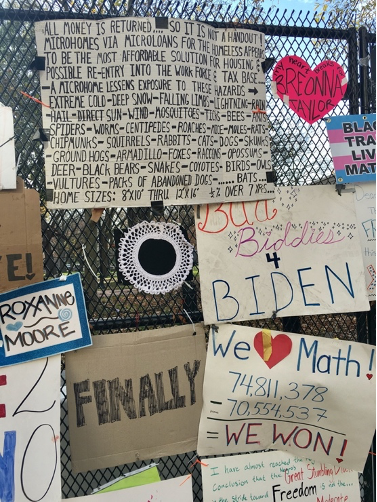 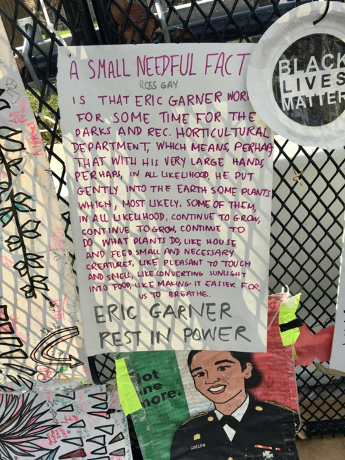 An orange Post-It affixed with pipe cleaners reads: “Jesus Christ would have supported refugees. Refugees are just people who lost their homes.” 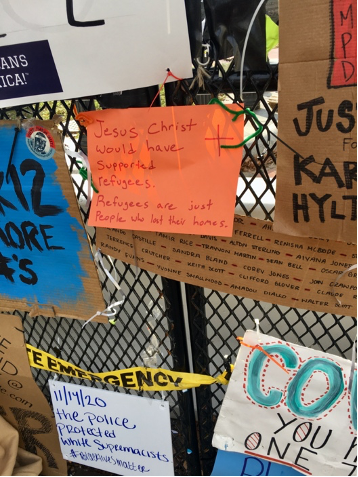 The last words of Elijah McClain are written on a posterboard in green and blue and purple marker muddied by the rain. 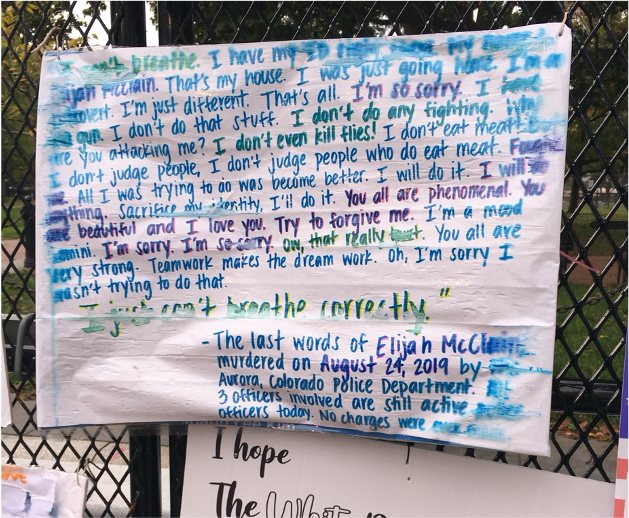 The pieces encompass everything from professionally printed posters and children’s artwork. 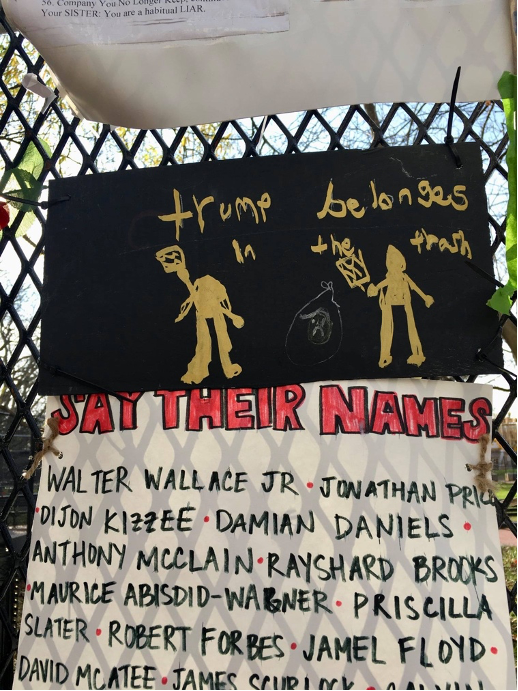 There’s an installation where “FUCK 12” (a slang reference to the police) is spelled out in orange-painted bubble wrap on which the names of the murdered are written in black Sharpie. 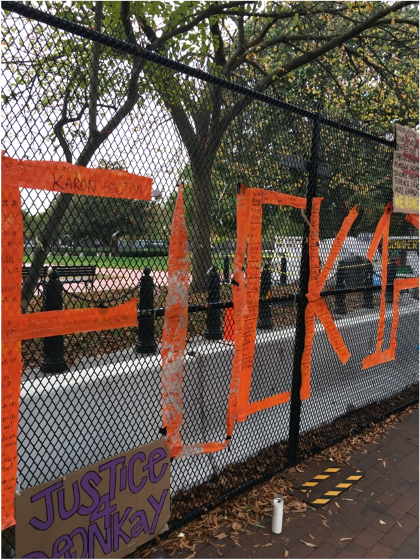 Over time, the messages have expanded beyond the core message of BLM and come to incorporate intersecting issues. This has taken the form of homages to the recently departed Congressman John Lewis and Supreme Court Justice Ruth Bader Ginsburg (“RUTHless and Determined”), a display of posters celebrating Black trans lives, verbiage encouraging people to vote (“Vote Out Racism”), reading recommendations (“Who Invented the ‘White Race’? the Ruling Class! Read: Ted Allen’s ‘The Invention of the White Race’”), critiques of President Trump (“OBAMA, when are you coming home, the babysitter’s weird!”), pleas to US lawmakers to pass COVID-related economic relief (“PASS THE STIMULUS”) and, later, requests that the General Services Administration (GSA) release transition funds to the President-elect (“GSA-> STOP KILLING US APPROVE FUNDS!”). 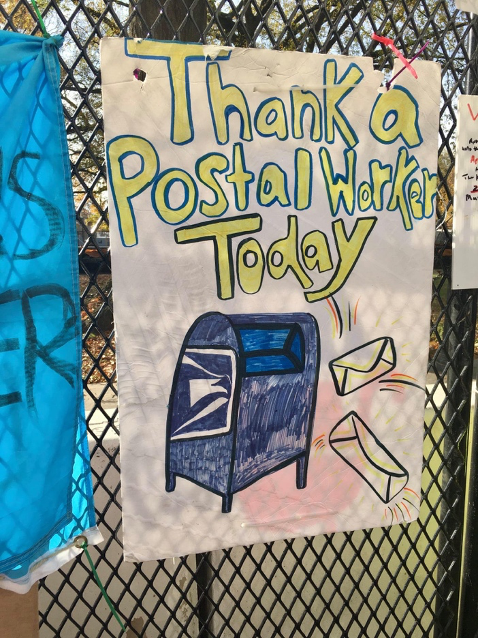 To characterize the protest as being focused on Trump—as the Daily Mail did after the U.S. presidential election— is to ignore the complexity of the memorial’s message.[7] This isn’t just an anti-Trump memorial; it is a wholesale indictment of white supremacy that includes the intersection of white supremacy with sexism, ableism, homophobia, transphobia, ethnocentrism, Islamophobia, and economic inequality. Through its constitutive pieces, the memorial also condemns white supremacy within such institutions as the US executive, legislative, and judicial branches, the police force, the military, and American Christianity. 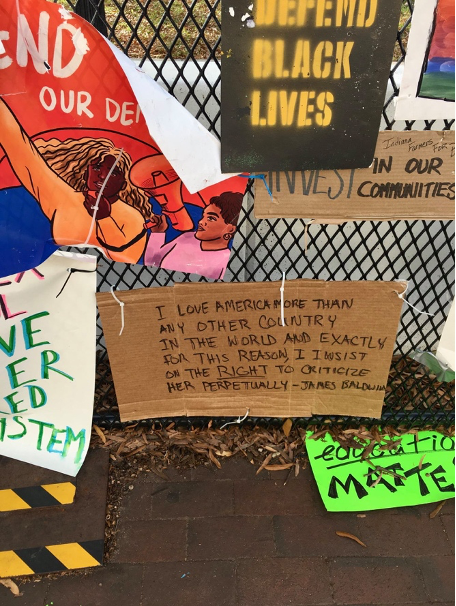 The BLM memorial fence is not a stand-alone piece. On the other side of the street, before it was removed in November 2020, a parallel, graffiti-based BLM art protest occurred on the plywood structures surrounding the Hay Adams Hotel. Looking beyond this one city block though, the BLM memorial fence can be situated within a broader American commemorative culture, such that it is directly tied to the ongoing history of American responses to trauma and mass death whilst also representing a distinctly provocative, innovative gesture within that history.

The memorial clearly fits within a tradition of site-specific makeshift memorials, such as those arising following the deaths of George Floyd, Michael Brown, and Eric Garner, as well as the memorial outside Emanuel AME, site of the Charleston massacre.[8] Like the Lafayette Square fence memorial, these were informal, community-based projects and they proved far more permanent than their makeshift origins might suggest. However, due to their site-specificity—their construction at the murder site— these memorializations are imbued with a locality that, while not wholly absent, manifests differently in the BLM memorial fence. 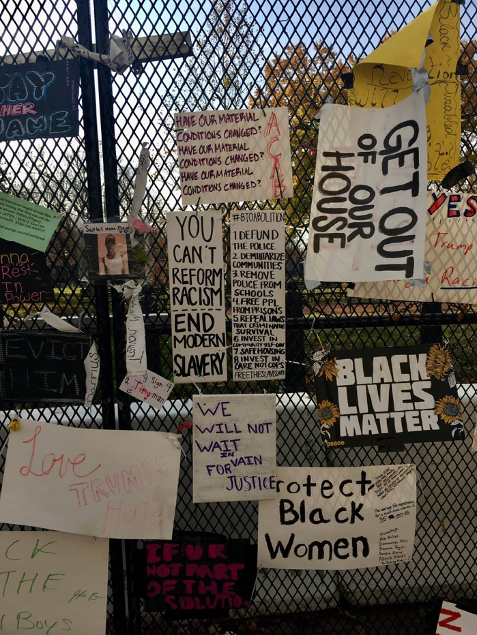 The fence’s proximity to the White House, and its location in Lafayette Square are important to note. A swath of fabric excerpting text from the 1925 Geneva Protocol banning the use of “asphyxiating, poisonous or other gases” directly links the art of the fence to the gassing of demonstrators on June 1, and the brutality of law enforcement on display that evening. 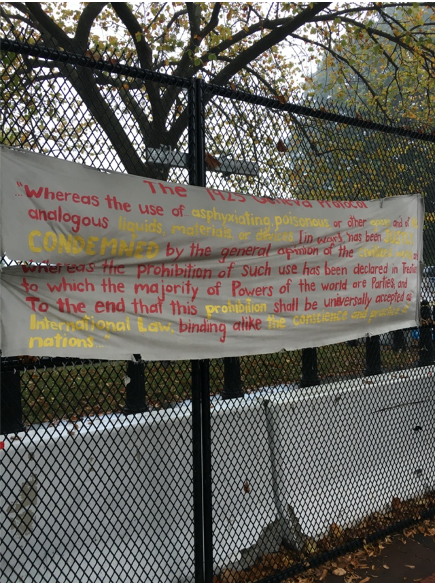 Due to the memorial’s construction on fencing, it contains material and visual echoes of those the informal tributes that arose on the fencing erected around the Alfred P. Murrah Building following the 1995 Oklahoma City bombing—an act of white supremacist domestic terrorism—and also the fencing that surrounded the 16-acre World Trade Center (WTC) site during its clearing post-9/11.

Equally improvisational, in their movement towards efforts of collective recovery, these installations differed significantly from the BLM fence. Though the Lafayette Square fence was erected following a moment of violence, the violence was federally sanctioned, and the fencing’s installation represented a fissure—a bleakly ironic physical and symbolic separation of the people from the institutional power they sought to critique. At the Murrah Building and the WTC site, individuals affixed messages to the fencing as a mode of commemoration and lamentation. In Lafayette Square, the messages are, similarly, about memorialization and grief, but they also constitute an active, ongoing protest against white supremacy and the myriad ways in which people have been harmed by the inequalities and cruelties persistent in American life.

Lafayette Square is not the site of the bulk of the trauma represented on the fence. Through its inclusion of a broad range of protest and its coalescence of diffuse tragedies, the BLM memorial fence evokes more formal national memorials. As with the Vietnam Veterans Memorial—[11]— the art on the BLM fence identifies specific individuals. As with the AIDS Memorial Quilt,[12] a grassroots memorial project first displayed on the National Mall in 1987, the BLM memorial fence protests the occurrence and persistence of state-sanctioned mass death. Like both the wall and the quilt (especially in its initial presentation on the National Mall in DC), the BLM Memorial works to relocate the act of commemoration from a local context, physically reinscribing the lives of those memorialized into a national, consciously historical context.

The memorial is a DC-based project, launched and defended by the local community, and commemorating lives lost in the District. It, no doubt, operates within the community in ways that the people who live here but come from elsewhere, like myself, will never know or understand. 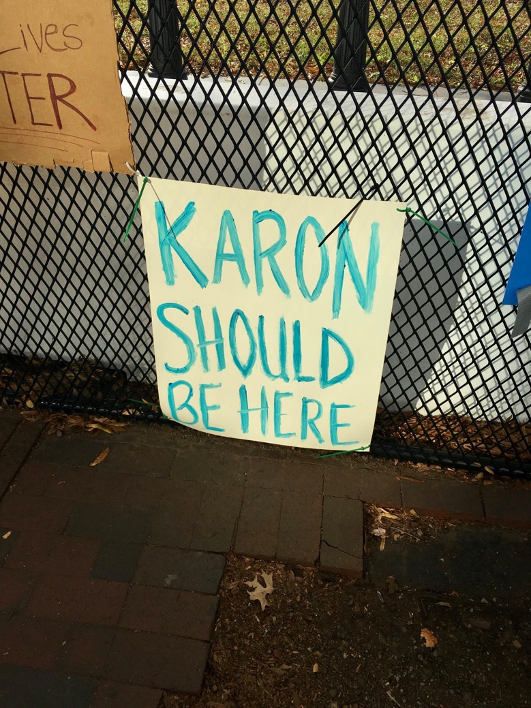 But the scope of its memorialization extends far beyond the capital city. 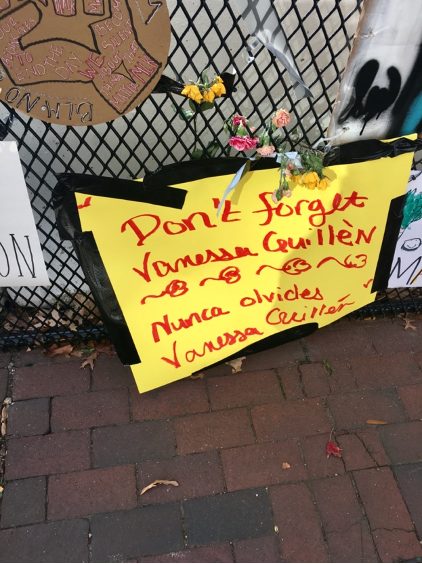 An exercise in commemoration culture laden with personal grief, the protest fence constitutes a lamentation at once local, national, and global. This is not just about Trump. Rather, it is a critical, creative, improvisational engagement with the question of what America is and what America has done, what America is still doing. Physically, situated at the intersection of presidential power and public space, collectively, the BLM memorial fence constitutes a full city block of sustained protest. Individually, the pieces comprise cries in the broader national scream. 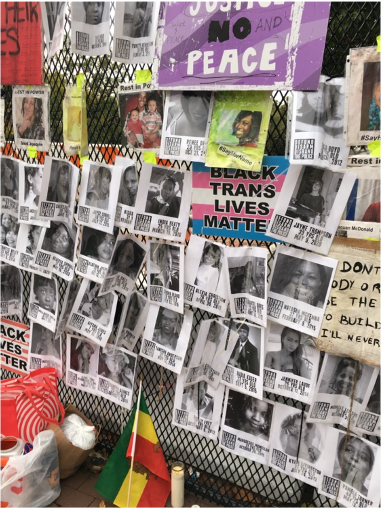 The federally authorized violence against the demonstrators on 1 June was embedded in a long history of state-sanctioned violence against Black Americans. The BLM memorial fence stands as a testament to the occurrence of that violence as well as its ultimate futility. Those who have been lost will be remembered, the living will fight on, and, on the walls hastily thrown up to contain and stop them, the people will resist, they will push back, in righteous anger, and they will be heard. 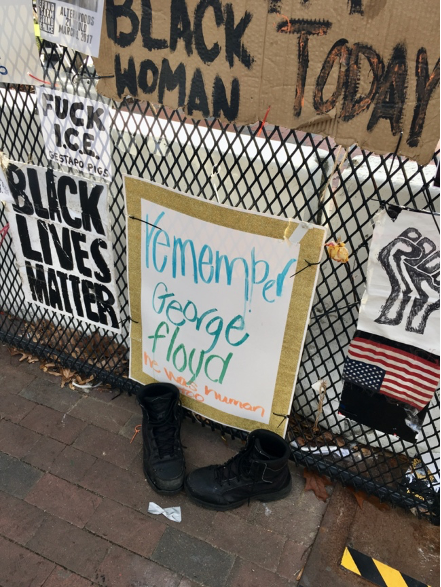 In memory of Brandon Webber.

Oline Eaton (@oline_eaton, www.FindingJackie.com) researches American celebrity, trauma, feelings, first ladies, and feminism. She teaches writing at Howard University and NYU-DC, and would like to thank her Class of 2024 students at both institutions for the conversations in the Fall 2020 semester that helped shape this piece. Thank you also to Nanette O’Brien and Melvin Jones.

[[6]] Pro-Trump contingents have repeatedly vandalized the memorial. It was most recently under threat during a MAGA rally, which took place over the weekend of December 12, 2020 and involved members of the terrorist organization the Proud Boys. For many months now, the memorial has been physically guarded and patrolled by a small corps of GoFundMe-funded volunteers dedicated to maintaining it “as a living demonstration of our American rights to freedom of speech and freedom of protest.”

[[7]] Kekatos, Mary. “’You’re fired!’: White House security fence is covered in signs telling Trump he has lost as Biden is on track to win the presidency.” Daily Mail, 6 Nov. 2020, https://www.dailymail.co.uk/news/article-8921711/White-House-security-fence-covered-signs-posters-reading-loser-time-go.html.

[[10]] JDO Staff. “Respectfully, Ground Zero. A Visit to the Site of the World Trade Center.” https://www.jadedragon.com/archives/newsclips/gzero1.html.

[[12]] “The History of the Quilt.” National Aids Memorial, https://www.aidsmemorial.org/quilt-history.

“When We Knew No North Or South”: Veterans of the U.S.-Mexican War at the 1876 Centennial
Review: Seventeenth Annual Conference of the Scottish Association for the Study of America
American Multiculturalism as Cultural Imperialism
Storify of our #bookhour on Jonathan Franzen's PURITY
Meet the Curator: ‘Show Me the Money: The Image of Finance, 1700 to the Present’
“Heeere’s Johnny!”…Again…and Again…: Pluto TV and the Continued Presence of Johnny Carson’s Tonight ...
May Day and the future of workers’ internationalism
‘Unbelievable Originality’: Lining Tracks and Performativity in Zora Neale Hurston’s Folk Concerts

Oline Eaton (@oline_eaton, www.FindingJackie.com) researches American celebrity, trauma, feelings, first ladies, and feminism. She teaches writing at Howard University and NYU-DC, and would like to thank her Class of 2024 students at both institutions for the conversations in the Fall 2020 semester that helped shape this piece. Thank you also to Nanette O’Brien and Melvin Jones.
View all posts by Oline Eaton →
Tagged  Black Lives Matter, Memorials and Popular Memory Series, Photography.
Bookmark the permalink.