Expertly organised and coordinated by Rachel Sykes (Nottingham Trent University), Jennifer Daly (Trinity College Dublin) and Anna Maguire Elliott (University of Sussex), the Marilynne Robinson Symposium was the first of its kind. As Richard King observed in his keynote address, “Marilynne Robinson is a public intellectual”, and there was little chance that those gathered for the symposium could disagree. Robinson has been reviewed by an Archbishop, interviewed by a President, and seems to be on a perpetual tour of the intellectual world, generating press releases, interviews and newspaper articles. The one-day symposium, dedicated exclusively to Robinson’s work, was both timely and exciting. With numerous papers, followed by three short keynote addresses from Richard King (University of Nottingham), Sarah Churchwell (School of Advanced Study, University of London) and Bridget Bennett (University of Leeds), the cohesion of the day was one of its most notable features. The keynote addresses were intimately connected to the preceding papers and discussions, providing an extremely useful conclusion to an event which will undoubtedly inform future research. 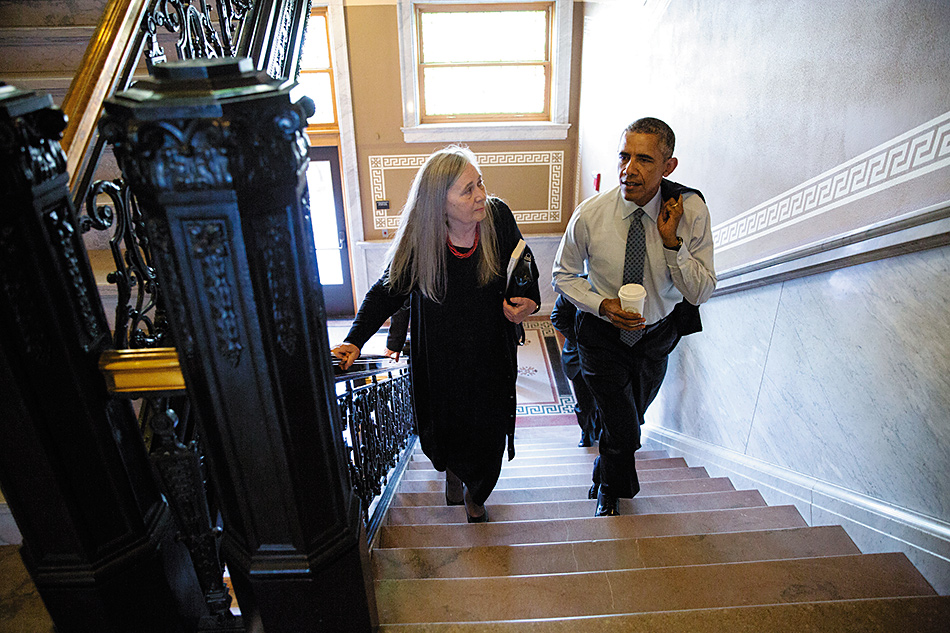 As a thinker, Robinson operates at a number of interfaces: between theology and fiction, ethics and politics, and philosophy and anthropology. This range of disciplines was well represented and the concurrent panels left attendees with all but impossible choices as to which to attend. As a theme for the day, being unsure where to position oneself was appropriate, with a number of speakers emphasising the problematic nature of home and homecoming in Robinson’s writing. Emily Hammerton-Barry (Independent Scholar) suggested Robinson’s writing of domestic space is positioned against a theistic conception of home—rendered uncomfortable by the comparison—resulting in the feeling of being ‘homeless at home’, the default setting of many of Robinson’s characters. Continuing explorations of the home, Lucy Clarke (Oxford Brookes University) considered Robinson’s ‘houses’ as spaces of grief, suggesting her writing of time is crucial in imaginative engagement with grief and construction of domestic space. Home as paradoxical site of pilgrimage and exile pervaded the following discussion, with speakers and attendees wrestling with how to understand the theological and philosophical implications of home as presented in the four novels.

In the first of the keynote addresses, Richard King noted Robinson’s ‘radical Christology’, arguing that any attempt to attend to the value of her work must make room for its theological foundations. This sentiment was expressed throughout earlier panels which contextualised Robinson in discussions of Emersonian transcendentalism, Thoreau’s Walden (1854) and American protestantism. Robinson the theologian was referenced throughout the day with speakers eager to marry their readings of Robinson with her stated convictions. In particular, John Mark Derbyshire (University of Leeds) delivered a compelling paper on Jack as a heretical presence in Gilead (2004) and Home (2008), arguing that heresy should be understood generally as the perpetual re-reading and reinterpretation of text and event. King continued by highlighting Robinson’s ‘suspicion of the hermeneutics of suspicion’, providing a usefully pithy conclusion to papers on Robinson’s interactions with Freud and her critique of contemporary philosophies of mind, science and religion. 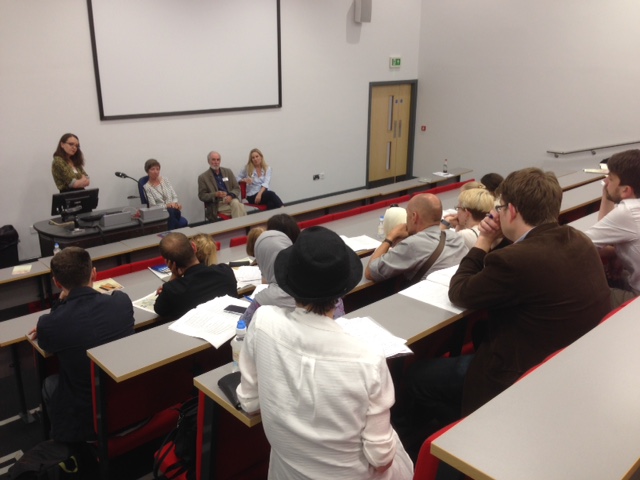 Moving on to typology, Sarah Churchwell opened her address by arguing for the difference between Robinson’s non-fiction and novels. Again, this crucial observation followed closely from earlier discussions, with speakers exploring the relationship between the two distinct strands of Robinson’s work. An implicit consensus was reached through these conversations on the scholarly value, and indeed necessity, of bringing the two wings of Robinson’s output into dialogue. Churchwell provided engaging readings of Gilead, Home and Lila (2014), and the subtexts operating within them, arguing for a reading of Gilead which recognises the influence of the historical moment of 1956 and its moral implications.  Commenting on the challenging nature of teaching Robinson’s novels in universities , she highlighted Robinson’s ‘allegorical mind’ and her penchant for parable – a genre Churchwell claimed we have forgotten how to read. The practical business of reading Robinson was a recurring topic, with delegates citing the aesthetic force of the writing—in the context of critical engagement—as a source of both joy and frustration. Indeed it was suggested that the beauty of Robinson’s prose has a tendency to mask the problematic nature of some of her arguments. Tim Jelfs (University of Groningen) made this point forcefully with particular reference to Robinson’s writing of America and American democracy. In addition, Robinson’s public praise of the Obama administration became an important subject for discussion for delegates and this aspect of her writing and public contribution certainly provoked some of the more critical judgements of her thinking.

Finally, Bridgett Bennett’s address provided a fitting end through what she termed the presences and absences of the symposium; that is, what she felt had been successfully addressed and overlooked opportunities for future consideration. Acknowledging the exploration of the Christian mind and fiction, she commented on the  real efforts to bring disparate aspects of Robinson’s work into conversation with one another. In terms of absences, it is interesting to note that perhaps one of the most obvious omissions was explicit connection to Robinson’s own spiritual hero, John Calvin. Despite her frequent allusions to his influence on her thinking, the gathered academics did not broach the relationship between Robinson and Calvin’s work. This is by no means a criticism of the event, rather, this perhaps hints towards a crucial consensus reached in silence. There is a danger that we take Robinson’s exultation of Calvin too seriously. Indeed there was the very real sense during the conference that Robinson is far too interesting a writer and thinker to work reduce to an imaginative re-writing of Calvin’s theology, or indeed to any single interpretative attempt. 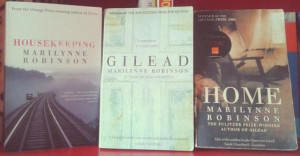 Bennett ended her address by issuing a challenge to the gathered scholars as to where Robinson studies as a legitimate field ought to go from here. She argued that Robinson is all too often read in light of her stated influences—including Emerson, Whitman, Thoreau, and Dickinson—but is rarely as a contemporary author writing in the twenty first century. Bennett challenged her audience to read Robinson in her moment—positioning her in relation to her contemporaries, in her immediate historical and literary context—thus ending on a note which highlighted the importance of scholarship yet to come.  While, as Ames states in Gilead, “Memory can make a thing seem more than it was”, this is certainly not the case for this thought-provoking and timely symposium.  In providing a forum for discussion of new perspectives and research on Robinson’s work, the event was a resounding success. Yet, the symposium is not an end in itself. With the discussions forming the basis of a forthcoming Irish Journal of American Studies special issue (Spring 2017) and a call for papers released for an edited collection on Robinson’s work, the legacy of the event is assured. It is wholly appropriate that a symposium on the work of Marilynne Robinson, admired for its depth of meaning and its revelatory nature, should go on to generate such exciting possibilities. The organisers should certainly be congratulated on an impressive achievement.

Review: Lives Outside the Lines: Gender and Genre in the Americas
Book Review: Melville: Fashioning in Modernity by Stephen Matterson
Counterpublics and the New Dynamics of Contemporary Conservatism: From the Tea Party to the Trump Mo...
Broadway, Hollywood, and the Problem with The Prom
Who’s Got the Power: Big Decisions Ahead of Super Tuesday
Book Review: Downwardly Mobile: The Changing Fortunes of American Realism by Andrew Lawson
Review: The State of Fiction: Don DeLillo in the 21st Century
‘Let Us March On’: Lee Friedlander’s Civil Rights Photography and the Revolutionary Politics of Chi...

Andrew Cunning is a PhD candidate at Queen’s University Belfast. He works on Marilynne Robinson, with a special focus on the theological significance of her writing, both fiction and essays. He holds a MA in Theology/Philosophy from Queens.
View all posts by Andrew Cunning →
Tagged  21C, Celebrity, Literature, Marilynne Robinson, Religion, The Home.
Bookmark the permalink.