Storify of #bookhour chat on THE MANDIBLES by Lionel Shriver 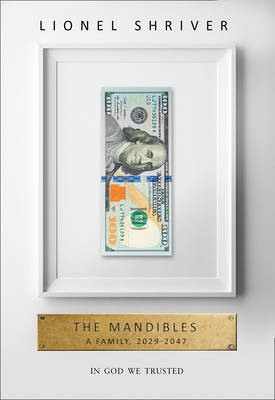 October 2016 marked our two year anniversary of #bookhour, and to celebrate this ongoing feature former U.S. Studies Online co-editor Michelle Green hosted a discussion of ‘financial crisis dystopia’ The Mandibles by Lionel Shriver with a panel of US and UK researchers. During the discussion Dr Kirk Boyle, Amy Bride, Sarah McCreedy and Michelle Green discussed Shriver’s depiction of material culture, emotions and capitalism, and to what extent the novel is a dystopia or plays with dystopian tropes. Debates arose around how self-conscious Shriver’s novelistic writing is, and if the novel is a Libertarian Candide or postmodern parody. The panellists ended the discussion by returning to The Mandibles as a neonaturalist novel, and left the chat asking, do the Mandibles achieve their capitalist utopia, and is a capitalist utopia achievable?

Questions that led the discussion:

Q1. My public library classified The Mandibles as science fiction, which makes sense given the speculative nature of its near-future setting. At the same time, Shriver explores the near-future Armageddon of the dollar in a traditionally realist manner, especially with the novel’s focus on the dynamics of “A Family.” How successful is the novel at representing an international event via a domestic narrative? A related genre question—Does Shriver’s journalist background enhance or detract from her treatment of complex economic themes?  (Kirk Boyle)

Q2. Although The Mandibles certainly satirizes the ignorance that accompanies the privilege of inherited wealth and upper middle-class materialism, it also participates in several fantasies that could be conceived as conservative in nature: U.S. exceptionalism, government overreach, collapse of law and order, survivalism/prepperism, etc. Is the novel ultimately a reactionary text, as Constance Grady argues? (Kirk Boyle)

Q3. ‘Money is emotional’, ‘Because all value is subjective, money is worth what people feel it’s worth. They accept it in exchange for goods and services because they have faith in it. Economics is closer to religion than science. Without millions of individual citizens believing in a currency, money is coloured paper’ (29). Discuss the relationship between emotion and economics in the novel. (Sarah McCreedy)

Q4. Shriver’s novels frequently include central characters that have a dismissive relationship to art when it doesn’t also perform a practical function. Consider the depiction of fiction and fiction writers in The Mandibles. (Michelle Green)

Q5. Consider the tone of the novel. Does the novel feature parodic elements? To what extent does Shriver parody conventions of dystopian fiction and recession fiction? What is the effect of this? (Michelle Green)

Kirk Boyle (@KirkMBoyle) is an assistant professor in the Department of English at the University of North Carolina Asheville. He is the author of The Rhetoric of Humor: A Bedford Spotlight Reader (Bedford/St. Martin’s, 2017) and the co-editor of The Great Recession in Fiction, Film, and Television: Twenty-First-Century Bust Culture (Lexington Books, 2013). His articles have appeared in Jump Cut, Film-Philosophy, the International Journal of Žižek Studies, Postscript, and the Journal of Philosophy and Scripture.

Amy Bride (@AmyBrideMA) is a second year AHRC funded PhD student at the University of Manchester. Her project looks at the intersection between American gothic literature, slavery, and finance. She has published one article on Bret Easton Ellis’s American Psycho with the Irish Journal of Gothic and Horror Studies, and has a second publication being released this Autumn with the Supernatural Studies Journal. She is also due to commence a research placement with the Library of Congress in Spring 2017, analysing financial records of slavery held within the Black History Collection, 1700-2008. Alongside her PhD Amy is a qualified FE teacher and teaches secondary school pupils as part of the Brilliant Club, a charity which places PhD tutors into schools to promote university participation in economically-disadvantaged students. Her other research interests include Native American literature and culture; science fiction, dystopia, and technogothic, blank fiction, and cinema of the 1980s and 90s.

Michelle Green (@MGnotts) is a final year PhD student in the department of American and Canadian Studies at the University of Nottingham, UK. Her research examines representations of fatness and “obesity” in late twentieth-century and twenty-first century North American fiction, focusing on themes of temporality and genre. She has previously published on Margaret Atwood.