MAGA, White Evangelicals, and the Objection to Kamala Harris 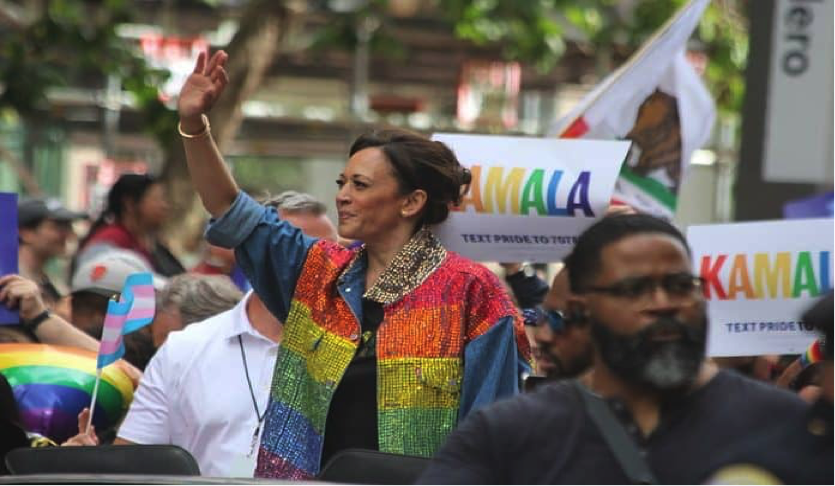 Trump established his political career with the Obama birther conspiracy, which alleged that President Obama was not a natural-born citizen of the US and was, therefore, an illegitimate president. Since then, discrediting Black and Brown people’s full human standing, particularly women’s, has been a central feature of his presidency, as shown when he told “the Squad” to “go back” to wherever they came from; three were born in the US, and the fourth, Ilhan Omar, found asylum in the US as a child. Similarly, the Trump campaign attempts to chip away at Kamala Harris’s legitimacy as a presidential candidate with messaging underpinned by the white South’s historic veneration of manliness, suspicion regarding anyone who is not white, and fear of anarchy.[1]

Trump’s ads against Harris and, through her, Joe Biden, contain elements of traditional, religion-laced white supremacy and sexism, which attempt to attract Trump’s white, evangelical Christian base through rhetorical connections to nostalgia for the Jim Crow South. Trump is not an Evangelical, but he understands enough about evangelical culture to ensure that attacks on Kamala Harris reflect the Victorian values of manliness and an embattled idea of Christian citizenship held by many Evangelicals to say: “If I lose, the nation falls.” Controlling how women, especially Black women, are permitted into the public sphere is just as essential to maintaining the myth of Make America Great Again (MAGA) as it was to the segregationist preachers of the 1950s, such as J. Howard Smith and Rev. W. A. Criswell. As a Black, Indian-American woman and a commanding speaker, Kamala Harris challenges this worldview. She can also adroitly wield the prosecutorial dagger and call out the Trump administration in effective ways. For these reasons, Trump’s campaign endeavors to de-legitimize Harris as a potential president and a Black woman.

Some Trump champions view Harris’s ability to both charm and prosecute as evidence of her “Jezebel spirit.” [2] In the Old Testament, Jezebel was an outsider brought from another kingdom to marry King Ahab of Israel. She worshiped foreign gods and promoted them to the Israelites, breaking the second commandment, which forbids the worship of idols. When challenged, Jezebel manipulates the weak Ahab and continues to worship her gods.[3] Being a Jezebel was a characteristic that white Southerners projected onto Black women.[4] During Jim Crow, authorities depicted Black women as readily available sexual beings who bedazzled white men, leading them into corrupt and sinful behavior.[5]

How does this relate to Kamala Harris? Jezebel did not submit to Ahab; she was rebellious. In contemporary, charismatic, evangelical circles, a Jezebel is a powerful, archetypal evil spirit. Immediately after Joe Biden announced Harris as his running mate, the Trump campaign ran an ad that played into to this by depicting Harris as a “phony” who would have undue influence over Biden because “he’s not that smart.” A second ad plays a soundtrack of Harris laughing “at” Biden discussing peaceful protests, portraying her as a trickster. The ad was panned by media critics, but Trump was and is attempting to shore up his base by encouraging ideas they already have. To further this idea, copies of the “Joe and the Hoe” meme have been widely circulated through Republican networks and the sale of related t-shirts were banned by Amazon. The theme of Harris manipulating a gormless Joe Biden has continued to develop as Trump frequently stresses that Biden is, in some way, addled. 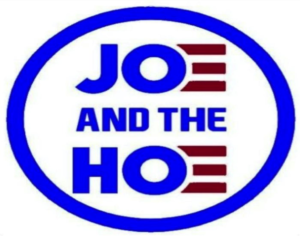 (This Photo by Unknown Author is licensed under https://creativecommons.org/licenses/by-nc-nd/3.0/)

Political Correctness, the Covenant, and Apocalypse

Harris, through her identity and politics, epitomizes what white Evangelicals disdain as left-wing political correctness. As the Civil Rights Movement came to the forefront of American politics in the 1950s, Rev. W. A. Criswell, future president of the Southern Baptist Convention, was celebrated by some when he attacked desegregation using racist, dehumanizing epithets in two speeches. He wanted to maintain segregation to keep his daughter “from people that are iniquitous and vile and dirty and lowdown.”[6] Foreshadowing praise for Trump for “telling it like it is,” the Dallas Morning News commended Criswell for “clearing the air” with his truth-telling about mixed race sex.[7] In 1968, before he ascended to the Southern Baptist Presidency, Criswell expressed regret, but not repentance, for his words. Criswell’s presidency was the opening gambit in a fundamentalist takeover that intensified a gendered interpretation of the Bible, fortifying the idea that white men are the custodians of white women. This gained traction in the following decades through organizations he shepherded, such as the Moral Majority.[8]

Sanctified protection was not extended to Black women; they were analogized as outsiders like Jezebel and the other non-Israelite women of the Old Testament by white evangelical preachers and writers.[9] Through segregation, white preachers told their congregations that they fulfilled God’s divine covenant. To illustrate God’s intention, preachers resurrected the folktale that God dispersed humanity into distinct regions of the earth according to race in order to justify white Southern attitudes toward race, sex, and segregation.[10] The tale alleges Noah’s three sons were of different races: white, yellow, and Black. In this telling, Noah repudiated his Black son, Ham, making him a lower category of humanity. Antebellum theologians rejected this racialized explanation.[11] Nonetheless, segregationists believed the flood was God’s way of punishing the Israelites for intermarriage. Moreover, this view was backed up by eugenicists who imagined that white women could purify America if protected from interracial relationships. They argued God would punish the South for failing to maintain racial segregation.[12] The idea of retribution against those who break God’s covenant continues to feature in evangelical thought during crises such as AIDs and COVID–19.

Many of the people who grew up listening to the story of Noah and preachers like Criswell are voting today. However, like many Americans, Trump’s white evangelical supporters have relatives of different races and ethnicities, so the white supremacist message has shifted to accommodate a different set of internal contradictions. For this reason, Trump enthusiasts try to sow division by claiming that Harris’s connection to Black American heritage is unjustified because her father is from Jamaica. In seeming anticipation of this, Harris highlights how her parents engaged in Civil Rights activism. Pushing Trump’s line, his prominent defender Dinesh D’Souza highlights the fact that Harris is the descendant of a white Jamaican plantation owner. D’Souza’s argument shrouds the historic paranoia about mixed-race sex. Enslavement and the Jim Crow systems were about preserving the legal right of white people to control who owned and inherited property. Ironically, D’Souza inverts the forceful acts that historically denied Black peoples’ right to property from white ancestors by making Harris the white planter’s heir. 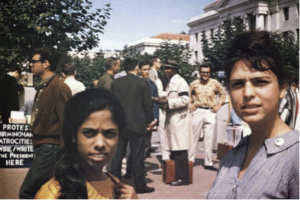 These racial systems enforced white men’s custody over their wives and daughters, which continues to be a subtext of campaign ads like this one in the 2018 Governor’s race in Georgia, where white Evangelicals are a significant constituency. Throughout the twentieth century, maintaining a reputation for purity as part of white female status was important socially and legally in cases of divorce, rape, and inheritance.[13] To enforce this, denying the history of sex and race in the South was crucial. Repackaging the idea of status, D’Souza positions Harris as a woman of double privilege, benefitting from whiteness and unmerited promotion due to her minority status. Then, he attempts to highlight the difference between her Jamaican and Indian background and that of Black Americans whose families have been in the US for centuries.[14] Harris’s detractors repurpose arguments to diminish her authentic connection to the Black community, her attendance of a Baptist Church and historically Black college, by updating the original segregationist message to try to reinforce the idea that she is an opportunist seeking an advantage.

In the early twentieth century, women in Southern white churches knew there was a moral crisis within the Jim Crow system. They joined anti-lynching campaigns and evangelical women ran interracial institutes with sermons and speakers to uplift Black women, without encouraging white women to attend as well.[15] Because of these efforts, white Evangelicals justified ignoring Black demands for fair treatment that they believed lacked “good will.”[16] In a similar vein, Trump’s behavior disturbs white evangelical women, yet he is given the benefit of the doubt because Victorian gender identities continue to dominate the culture. Southern Baptist women submit to their husbands and cannot lead a church. What they find familiar in Trump is his claim to supreme manhood. The appearance of wealth, predatory behavior, and dominance and intimidation of family members mirror an evangelical culture that idealizes white men and forgives their trespasses while diminishing women’s experience.

Trump and his followers remain animated by the same racialized and gender-centered tactics and affiliations on which he built his career. He claims that electing a ticket that includes Harris would be an “insult” to the country. That claim allows his followers to fill in the rest of the narrative script, often with ideas that have historic and religious origins. Renewing Evangelical and Jim Crow themes spreads enough poison to excite white supporters and cast doubt on the legitimacy of the Biden-Harris ticket. This mystical mix of racist nostalgia and religion may only attract a few new adherents, but the conflation still has the potential to shape American political discourse and the outcome of events in November.

[2] Protestant evangelism encompasses a variety of ideas and affiliations. The demonic notion of the “Jezebel spirit” comes from charismatic evangelism, and the concept bleeds into other areas of the culture.

[3] The story of Jezebel is told across 1 Kings Chapters 17 and 21. She is discussed again in Revelations 2:20 as follows: (KJV) “Notwithstanding I have a few things against thee, because thou sufferest that woman Jezebel, which calleth herself a prophetess, to teach and to seduce my servants to commit fornication, and to eat things sacrificed unto idols.”

[9] “When the sin of this nation of Israel reached its culmination in the crucifixion of their Messiah, then God completed the work of scattering them among all the nations of the earth. This does not mean that God was sanctioning interbreeding with other peoples. The scattering is a chastisement.” Reaves, Lo! The Poor Innocents, 32. J. . Harold Smith, “God’s Plan for the Races, America’s Number One Problem, Segregation” (Radio Bible Hour, 1950), University of Central Arkansas Archives and Special Collections.

[14] Some Black Americans point out that they are the American descendants of slavery to distinguish their experience from that of Black people who immigrate to America by choice from Africa. The enslavement of Black people trafficked by the Atlantic slave trade is a historical experience that the US and Jamaica share.

Katherine Anne Porter: The Travel and Fiction of a “Roving Spirit”
60 Seconds with Olivia Wright
Mexican Migration in the Fiction of William Attaway
The Exhibit That Bombed: The Enola Gay Controversy and Contested Memory
The Indentured Atlantic: Bound Servitude and the Literature of American Colonization (Part One)
Hollywood in the Age of Trump: USSO Special Series
Songs about Rebels: The American Civil War in modern country music
60 Seconds With Sinéad Moynihan

Carol is a doctoral student in American History at the University of Sussex. Carol's research addresses questions about how white evangelical women used their religious authority to transmit ideas about race and gender through missions abroad, and how they educated white women and children about that experience in the Jim Crow South.
View all posts by Carol Grose →
Tagged  American Politics, Election Series 2020, Politics.
Bookmark the permalink.