Looking For Moses in NYC 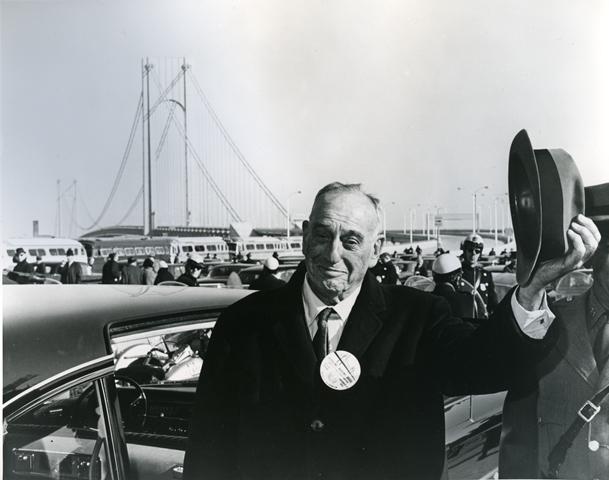 I am looking for Moses.

It is the unseasonably cold spring of 2015 and I am in New York to find the man who looms large over many of the most colossal constructions in the city, from the roadscapes of the Triborough Bridge and the West Side Highway to the pastoral delights of Jones and Orchard Beach and the parkways of Long Island. The federal highway system of the 1950s, which definitively changed the urban landscape of the city and brought to life the Bruckner, the Major Deegan, and the Cross Bronx Expressways, was championed by the same man.

Robert Moses, the man I seek, held innumerable positions of public office in the city throughout the course of much of the 20th Century (he was more-or-less forcibly retired in 1968), but his influence and reach extended far beyond the traditional remit of his duties. Moses began his career in New York at the Municipal Research Bureau in 1913, and by 1922 he had expanded into a rather astonishing number of departments, ultimately encompassing parks, construction, highways and public housing. During his career his official titles included: President of the Long Island State Park Commission; New York City Parks Commissioner; Chairman of the Triborough Bridge and Tunnel Authority (to which he remained a consultant until his death in 1981), New York City Construction Co-ordinator; and President of the New York World’s Fair, to name a few. In his obituary the New York Times recorded that by the time he had departed his post as chief of the state park system, “the state had 2,567,256 acres. He built 658 playgrounds in New York City, 416 miles of parkways and 13 bridges”[1]. 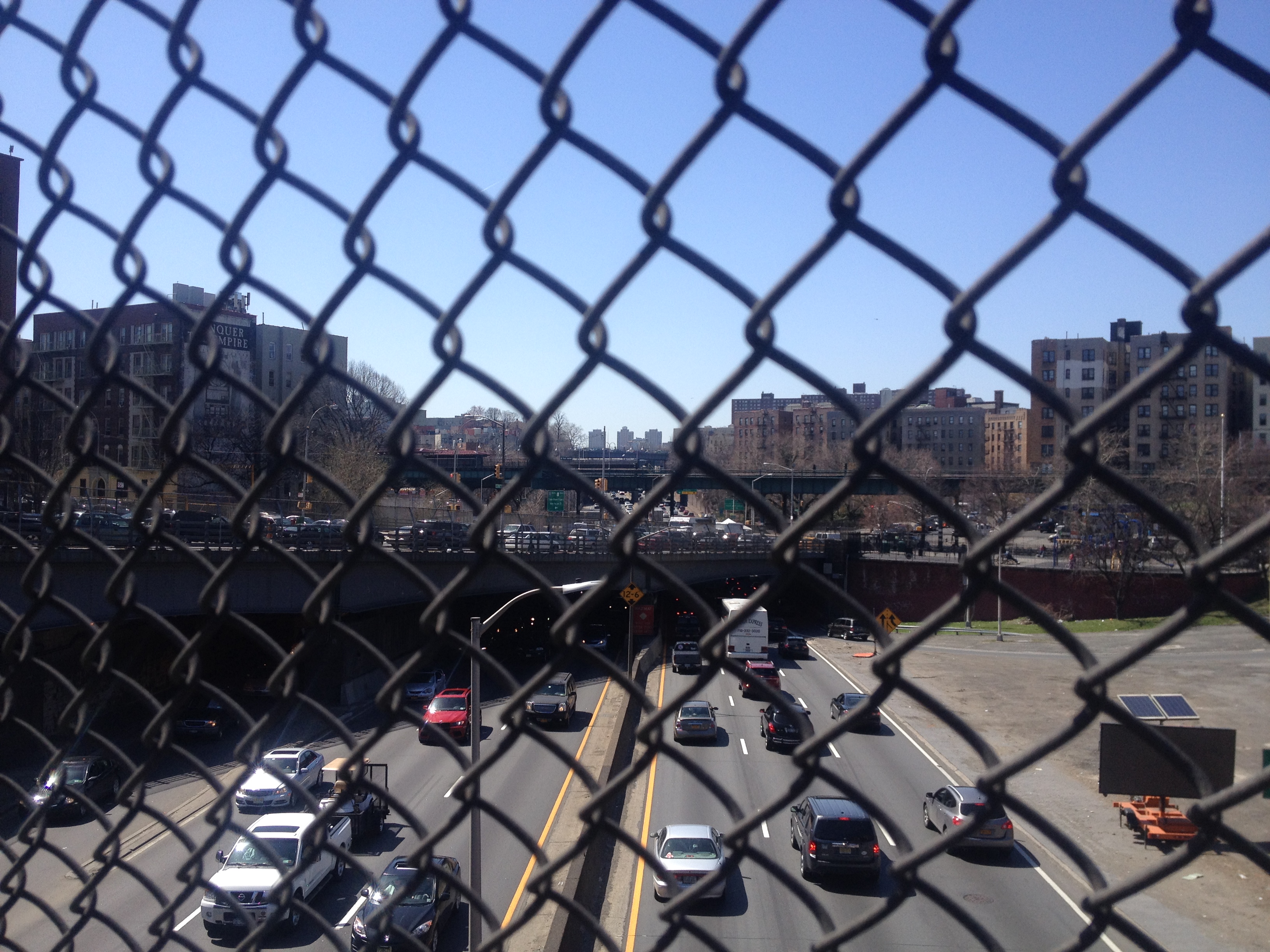 Robert Caro writes of Moses in The Power Broker, “If you are seeking his monument, look around you” (a statement originally written about Sir Christopher Wren)[2]. Where can the presence of Moses be felt most? Marshall Berman, who as a young man witnessed the decimation of the Bronx to make way for the Cross Bronx Expressway, writes in All that is Solid Melts into Air[3] that to oppose the work of Moses was to “oppose history, progress, modernity itself”[4]. If this is the case, his presence must haunt those spaces which are fraught with the constant cycle of construction and destruction that defines the modern metropolis. An abandoned home, a reconfigured city block or an old neighbourhood can create a sense of nostalgia for a localised, material past which has been re-arranged somehow like a pack of cards. Our remembrance of the city as we knew it before is now based on a sense of difference; fixed on a point of loss.

The Cross Bronx, which cuts directly through the borough it is named after, is for many the nadir of his ambitions. For Berman, Moses and his crew were not simply blasting through concrete and steel, they were obliterating the physical locus of memory. To live in the modern world imagined by Moses requires the destruction of “both the physical and social landscapes of our past, and our emotional links with those lost worlds”[5]. I meet Howard Kaminsky at the Bronx County Historical Society Library. Howard grew up in the Bronx and so when I tell him about my research he offers to drive me around the old neighbourhood and tell me stories about East Tremont and the construction of the Expressway. He stops the car on a road from which you could see the Long Island Sound spread between the Throgs Neck and the Whitestone-Bronx Bridges (both Moses projects). It is barren and windswept and cool, the beaches grainy rather than bright. He talks about the Slum Clearance programme that had forced so many people from their homes many years before ground was actually broken to build new housing. Change is inevitable, he says, he accepts that. For people living in the Bronx now, the present is all that exists anyway. But he feels that what Moses did was tantamount to stealing; something was taken by sleight of hand.

At the Paley Centre for Media on West 52nd Street I watch an interview with Moses which had been conducted in 1977. The then near-90-year-old Moses has liver spots, swings in his chair, wears heavy, thick-rimmed glasses, and manages to be hugely imposing even whilst sitting diminutively behind a desk. The interviewer, Robert Sam Anson, asks him about the construction of Lincoln Square. Lincoln Square, which was designated for urban renewal on April 21, 1955, was a controversial project. Moses states combatively that the neighbourhood was “the worst slum in New York”.[6] Afterwards I discover that about 5,000 families had been relocated from their homes on the site.

I meet with Gilbert Tauber, a 79-year-old retired urban planner who grew up in the Bronx on Gerard Avenue between 165th and McClellan. We begin our conversation with a discussion of the Cross Bronx, which Gil says “created a psychological barrier – whereas before you would go and visit Aunt Minnie twice a week, now to visit Aunt Minnie you’ve got this scary, noisy place”. Co-op City (completed in 1973), comprised of 35 high rise buildings clustered together in the Baychester section of the Bronx, ultimately “vacuumed all the Jews out of the middle Bronx”. But the place was “isolated, cut off by these highways”. Who built these highways? “Moses built the highways of course, and it had its own security system”.  Later Howard drives me around Co-op City, its vertiginous towers standing as tall and as remote as the reeds out on the Long Island Sound. 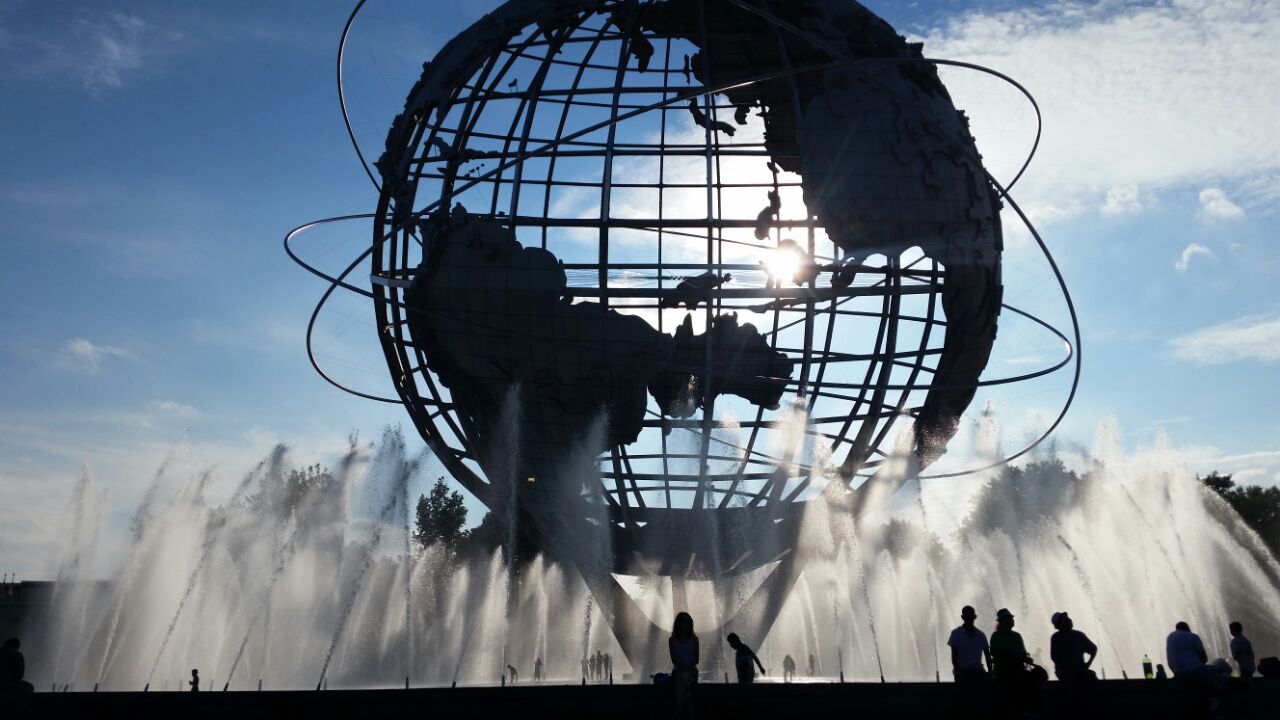 I find Moses again and again. At Lincoln Center the expanse of courtyard connects the complex of buildings, the horizontal, Escher-like corridors and staircases somehow both visible and transparent. I walk around the Henry Moore sculpture in a flat, shimmering pool that opens out the large rectangular space overlooked by Juilliard and the Lincoln Center Theatre and a staircase hovering over all, going nowhere, content to form a bridge that functions as a resting place, with no momentum. In Bay Ridge, Brooklyn, I walk from the subway to the Verrazano-Narrows Bridge, which appears suddenly at the end of Fourth Avenue as though cut out of the sky. When Moses was head of the Triborough Bridge and Tunnel Authority he championed the building of this bridge. It dwarfs everything. Cuts the air, segments it; separates the space around it. Makes everyone and everything in the vicinity insignificant.

In Flushing Meadows-Corona Park in Queens, which Moses created out of the literal ashes that constituted the Corona Ash Dumps in order to provide a home for the 1939-40 World’s Fair, the Unisphere – a 140-foot-tall stainless steel facsimile of Earth built for the subsequent World’s Fair in 1964-65 – dominates the landscape. Standing on the site of the now-destroyed Perisphere, another Moses construction built twenty-five years earlier, it is an enormous testament to the cycle of creation and erasure that characterised Moses’ tenure. Even Riverside Park felt typical of him – highway-adjacent, rigidly linear and mostly concrete (by 1937 he had completed what others, Frederick Law Olmsted among them, had started). The interconnected arterial highways feel as self-contained as Jones Beach – extraneous to the environments which they purport to be a part of. These places seek to manifest movement, connectivity, but relapse instead into self-containment. They celebrate themselves; they displace what came before. 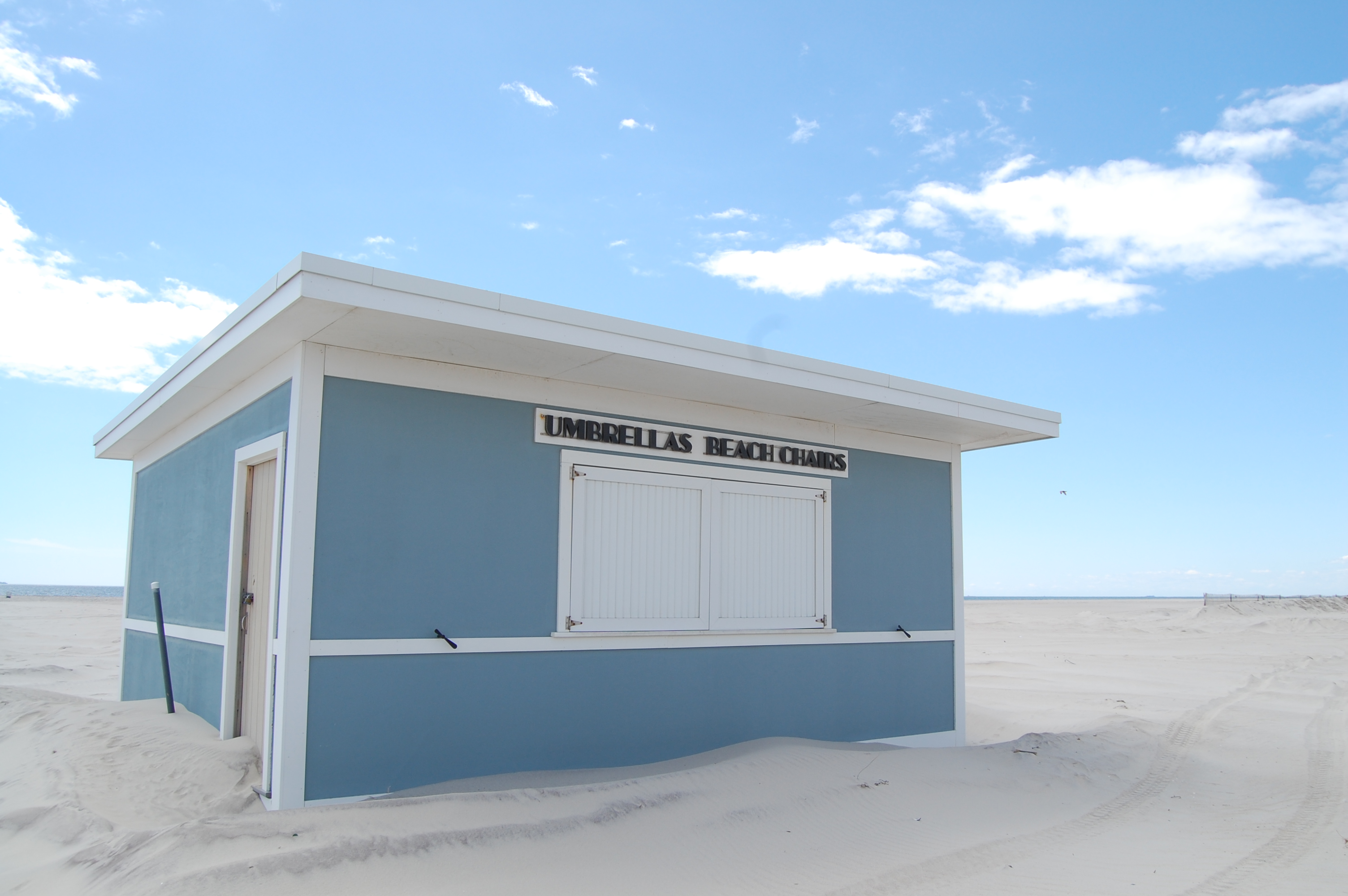 Naima Rauam, an artist who has lived for decades next to the Fulton Fish Market before it was moved to Hunts Point in the South East Bronx in November 2005 (for once, not due to Robert Moses), speaks to me about the ways in which people make their neighbourhood their own. They are “building their own life, their own history”, and that is what makes one’s approach to a neighbourhood “so emotional, it is so about ‘me’, so about not the neighbourhood but it’s about ‘me’, because this was where my life took place”. New York is particularly qualified to offer the opportunity for weeping over a now-invisible past. “Oh yeah, we’ve got tons of them here” Naima said to me, when I enquire as to the existence of nostalgics. “If you like being that way, where better to be because you’ve got a lot of opportunities to get schmaltzy”. Being in a position to know exactly what has changed, I begin to think, to see what you have lost and to quantify that loss, might in fact be what makes you a New Yorker in a city so defined by its own renewal.

I spend much of my time at the New York Public Library, Archives and Manuscripts Division reading the myriad papers in the Robert Moses collection, the boxes containing which are, when lined up, 146 linear feet long, and comprised of content spanning almost seven decades. I read over and over the notes I make while going through these papers, attempting to categorise, find patterns. I come across a memo written by Moses to George Spargo, a “Moses Man” until 1964, dated July 19, 1957, regarding a neighbourhood church in the ‘Park Row project’. “I don’t see how this church can possibly be saved” he writes. Perhaps, he concedes, “some plaque or memorial in or on one of the new buildings or in a small park giving briefly the history of the church and indicating that it stood there, might solve the problem”.[7] These are the traces Moses left behind. This is what he signifies. Here is where the city used to be. He is in the absences felt but not necessarily seen.

During my last few days in the city I visit the National September 11 Memorial and Museum. I stand at the two pools, footprints of the former towers, for a long time. The heightened, insistent visibility of old has become obscure; the past is now buried beneath the city in a mournful negative space. Absence in the place of presence signifies the remembrance of death: an abyss in place of a tower. “As I saw one of the loveliest of these buildings being wrecked for the road”, writes Berman of the Bronx, “I felt a grief that, I can see now, is endemic to modern life”[8]. I thought of Robert Moses as I looked at those inverted towers, the cavernous, inverted space filling unceasingly with water.

[3] Berman, Marshall. All That is Solid Melts into Air: The Experience of Modernity. London:  Verso, 1983. Print.

“Be Curious, Not Judgemental.” Influences of Positivity and Kindness in Ted Lasso
The Historiography of Ethan Allen
Storify of our #bookhour chat on THE WATER MUSEUM by Luis Alberto Urrea
Hollywood in the Age of Trump: USSO Special Series
Haiti's "horrid civil war": The 1791 Haitian Revolution and its Legacy in America
Storify of our #bookhour on Jonathan Franzen's PURITY
Overcoming Postmodernism
From Academia to Parliament: How academics can support the Foreign Affairs Committee

I am now in the fifth year of my PhD at the University of Exeter in the department of English, where I am studying part-time. I am researching narrative representations of urban space and memory in post-war literature set in New York and Los Angeles.
View all posts by Alice Levick →
Tagged  Black History, C20, New York, Robert Moses.
Bookmark the permalink.