Home » Reviews » Conference reviews » Literature, Education and the Sciences of the Mind in Britain and America, 1850 – 1950

Literature, Education and the Sciences of the Mind in Britain and America, 1850 – 1950

Dr Sara Lyons and Dr Michael Collins welcomed international contributors to the University of Kent to investigate how British and American novelists understood and represented the sciences of the mind between 1850 and 1950. During this period, the development of psychology and psychiatry led to increasing concern regarding the nature of knowledge, pedagogy, and individual ability. This two-day conference traced and explored how these concerns were frequently reflected and registered in literature of the time. 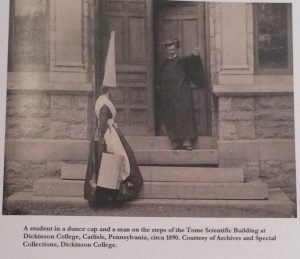 A recurring theme of the conference was, as Emma Burris-Jansen (University of Connecticut) put it in her discussion of changing abortion narratives, ‘dangerous knowledge’. Novels were often the only source of information for women about their reproductive systems and were therefore vehicles for both repression and discovery. Olga Ackroyd (University of Kent) developed the discussion of the theme of dangerous knowledge in her consideration of the vulnerability of exceptional intelligence to corruption. Ackroyd maintained that both Melville’s Pierre and Dostoyevsky’s Crime and Punishment echo concerns about ideas having viral potential to infect young minds with noxious philosophies. These texts warn that intelligence does not necessarily equate to the moral good. 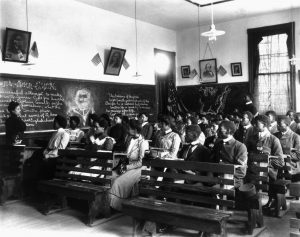 A history class at the Tuskegee Institute, a coeducational elementary and secondary school for African Americans founded in 1881. Georgia, ca 1902. by Tullio Saba

The febrile intellectual environment of the late nineteenth century saw Darwin’s evolutionary theories and the psychological advances of William James and Sigmund Freud eclipse phrenology as justification for racist ideologies in both Britain and America. Eike Kronshage (Chemnitz University of Technology) explored Conrad’s The Secret Agent (1907), highlighting the important role literature can play in questioning accepted knowledge and holding dubious science to account.  Kronshage argued that the apparently melodramatic tale masks a discussion about the limits of how much we can know of another, set against the reductive claims of phrenology.  Sara Lyons (University of Kent) surveyed the difficulties of tracing seemingly contradictory beliefs within an author’s oeuvre, exploring the divergent crevices of H. G. Wells’ ‘ordinary’ brain and his self-confessed elitism. Rather surprisingly, Wells did not accept that his brain was particularly exceptional, positing that perhaps he was just very good at being educated. Brad Campbell (California Polytechnic State University) highlighted the defence mounted by black literary artists against the misappropriation of army IQ tests as evidence of racial mental difference, with a particular focus on Jessie Fauset’s There is Confusion (1924). Michael Collins (University of Kent) discussed W.E.B. Du Bois’ commitment to the concept of scientific breeding as the means to improve the lives of African Americans, and the modernist credentials of his sociological treatise The Souls of Black Folk (1903). Collins outlined Du Bois’ engagement with the dialectical experience of black Americans, their ‘double consciousness’ as both self and other, and the radical nature of his assertion, given the context of the time, that intelligence is a shared aspect of the human species. 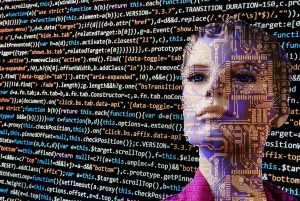 In light of the capacity for knowledge to be dangerous, the manner in which we impart it becomes particularly important. Jonathan Godshaw Memel (University of Nottingham) outlined Thomas Hardy’s dislike of conventional educational practices, and his preference for experience over ready-made instruction. This was evidenced through the character of Angel in Tess of the D’Urbervilles (1891), who observes with increasing clarity, after each of his adventures, the smallness of his home life. In contrast, his book-taught brothers become reliant upon corrective lenses to see what is right in front of them. Virginia Woolf offered a more gendered critique of established pedagogy, as discussed by both Gwyn Jenkins (University of Greenwich) and Natasha Periyan (University of Kent). Jenkins explored the differences between the academic styles of Miss Umphelby and Erasmus Cowan in Jacob’s Room (1922), showing how the former engages with Virgil with all her humanity whilst the latter commodifies the poet like a fine wine. Periyan picked out Woolf’s engagement with the phenomenon of public school masculinity and the muscular Christianity of Dr Thomas Arnold in The Waves (1931), noting Woolf’s referencing of Tom Brown’s School Days (1857) within the text. The dichotomy between formal education and lived experience raised difficult questions about how to find a middle way, and how do we capture the difference between knowledge and wisdom within a school environment. 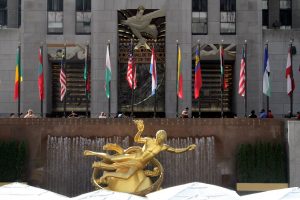 Prometheus at the Rockefeller Center by Jim the Photographer

The two keynote papers highlighted the relevance of the conference themes to today’s delicate political situation. Professor Helen Small (Oxford University) spoke about John Dewey, a principle American proponent of progressive education, and the functions of cynicism in the present age. In the subsequent discussion she stated that we cannot afford to be postcritical at this moment in time. Professor Priscilla Wald (Duke University) asked similarly big questions about what life has become, the role of myth and history, and the relationship between intelligence and humanity, all brought neatly into focus through the prism of Rutger Hauer’s replicant in Blade Runner (1982). Human beings are susceptible to ideas, and have a need for shared, agreed-upon statements of ‘truth’ by which we can orient our existence. Wald argued that as we hang in the balance between apocalypse and renewal it is imperative that we hold on to our shared history and learn the lessons.  Colonial narratives rely on the mass acceptance of narratives of otherness, and as we enter the age of artificial intelligence it behoves us all to consider how we define life, individuality and autonomy. If language is the key to thought, then semantics hold the essence of our humanity.

The conference highlighted the need to continue the literary legacy of questioning what we know, how we know it, and what we do with that knowledge. This need for critical engagement with the sciences of the mind and educational pedagogy is as relevant today, on both sides of the Atlantic, as it was to W.E.B. Du Bois and H.G. Wells.

For more information about the wider AHRC-funded research project into literary culture, meritocracy and depictions of intelligence please visit https://research.kent.ac.uk/literaryculture/​

Deborah Snow Molloy is an American Literature PhD student at the University of Glasgow. She is researching the relationship between the New York environment and the mental state of female characters in women's literature. Deborah's wider interests are in literary geography, medical humanities and early twentieth century American women's fiction. For more information on Deborah's research, you can visit her researcher profile(https://www.gla.ac.uk/schools/critical/postgrad/currentpgs/deborahmolloy/) or follow her on twitter @snowmolloy.
View all posts by Deborah Snow Molloy →
Tagged  C19, C20, Education, Gender and Sexuality, Knowledge, Literature, Psychology and Psychiatry, Race.
Bookmark the permalink.