Latinos and the Language Question: Arizona, 1967-70

On September 15 1969 Mexican American[1] parents and students held a protest march finishing at the Phoenix Municipal Building. The demonstration was organised in response to violent incidents between Mexican American and African American students. Those involved had initially hoped to highlight the need for more stringent security on the school campus. But the protests soon became a proxy for broader dissatisfaction with the education of Mexican Americans at Phoenix Union High School.[2]

In response to the protests the Governor’s portfolio holder for Mexican American affairs wrote a series of frantic articles in the Arizona Republic warning that the racial settlement in Phoenix was at the point of combustion.[3] The Superintendent of Phoenix Union High School District, Howard Seymour, had made similar warnings two years earlier. Poverty and substandard schooling in the city had created a ‘seedbed for violence, unrest, and active resistance.’ He considered Phoenix ‘equally vulnerable’ to the kind of civil disorder and racial strife that had afflicted major cities throughout the 1960s. [4]

The problems of poverty and poor educational attainment were acute. The Arizona Department of Education reported that, at the time of the 1960 Census, Mexican Americans between the age of 14 and 24 had typically completed 9.1 years of schooling. The corresponding number for Anglos was 12.1 years. An estimated 50 percent of Mexican American students entering the first grade would not graduate from high school.[5] By almost any measure, Mexican American children were receiving an inferior quality of education compared to their white peers. 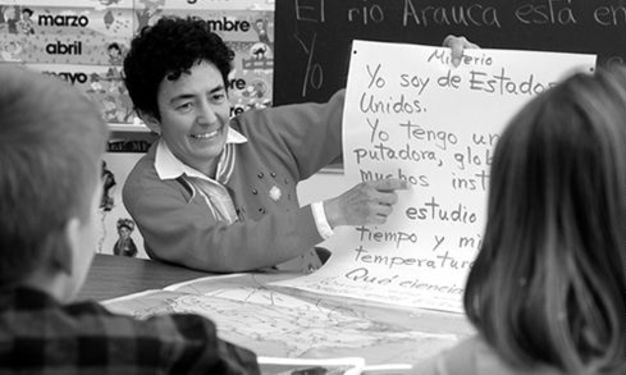 At the September march, parents presented a list of nine demands aimed at improving the education performance and school experience of Mexican American students. Protestors placed particular emphasis on the introduction of bilingual education classes in Phoenix Union High School District.  Students with limited English proficiency had for generations been educated in environments they found incomprehensible. [6] During the immediate postwar years, local teachers had used institutions such as the Arizona Bilingual Council and the Arizona Education Association to highlight the effects of English Only education on Mexican American academic performance.[7] Mexican Americans highlighted this critique in testimonies before the U.S. Commission On Civil Rights Hearings in Phoenix, on February 2 1962.[8] But demands that the state government introduce bilingual education were stymied by an English Only stipulation in the Arizona State Constitution. Since the beginning of schooling in Phoenix in 1880, the use of Spanish had been restricted in the schoolhouse.[9] Language restrictions cascaded through the state’s history and were codified into the state constitution of 1912.  It stated ‘Provisions shall be made by law for the establishment and maintenance of a system of public schools which shall be open to all the children of the State and . . . said schools shall always be conducted in English.’ [10]

English Only education was just one measure that Arizonan politicians had implemented to Americanise Mexicans and Mexican Americans. Language-based restrictions controlled access to employment, public services, citizenship and voting rights. As historian Gary Gerstle has argued,

These initiatives, in combination, amounted to an extraordinary effort to reshape the nation in ways that would exclude the unwanted, reform those regarded as social and political degenerates, and punish those who continued to engage in un-American behavior.[11]

One example demonstrates this with particular clarity. In 1967, a Canadian citizen wrote to the Governor to request an explanation for his unsuccessful application to teach in a public school. The Governor noted in response that a ‘statute limiting teachers or other public employees to United States citizens has been on the books for many years.’  But, he explained, ‘this law originated because of the influx from our neighbour to the south, inasmuch as the standard of living in Mexico is below that of Arizona and was done to protect U.S. citizens.’[12] 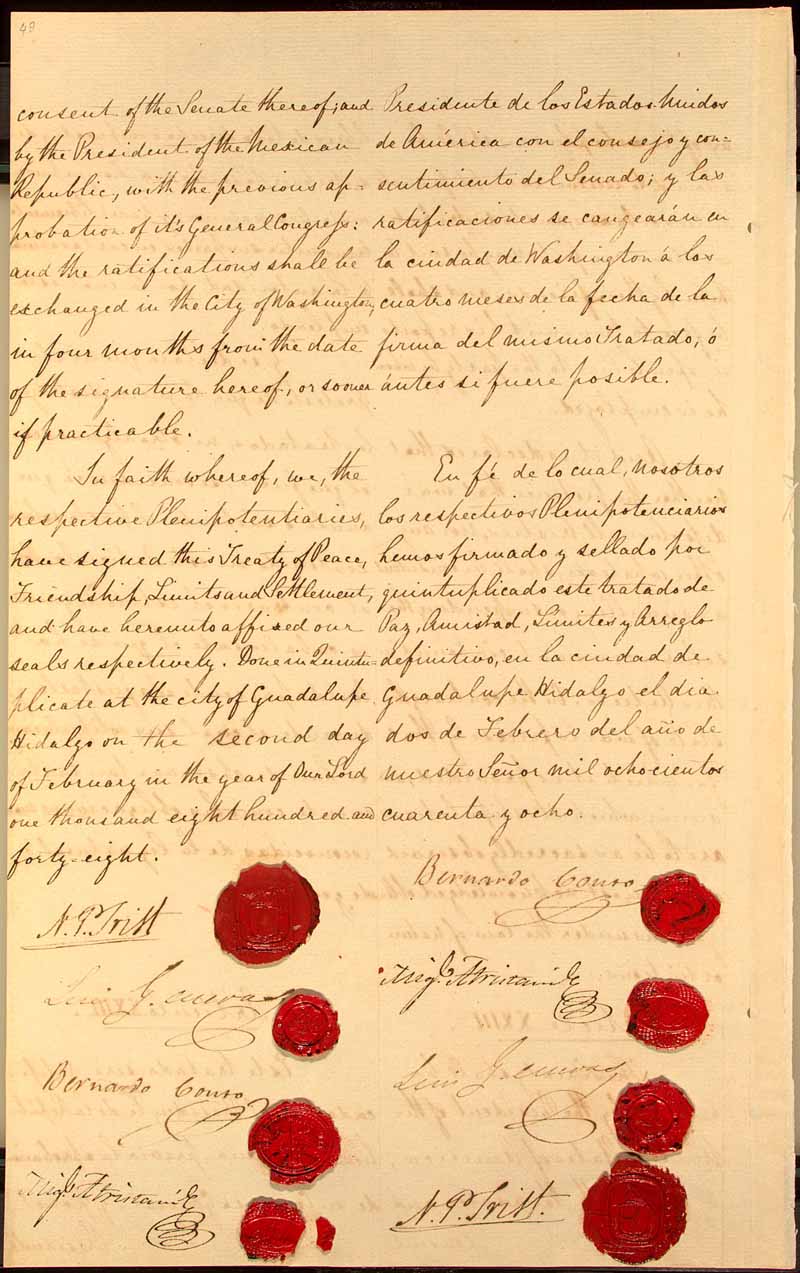 Last page of Guadalupe Hidalgo Treaty, with signatures and seals. Library of Congress.

The passage of the federal Bilingual Education Act (BEA) in January 1968 removed an important instrument of exerting control upon Spanish speakers. The Act made a limited fiscal commitment to support school districts to develop innovative pedagogical methods to educate children with limited English skills. But as historian Natalia Mehlman Petrzela argued, it was significant as the first ‘national commitment to serving the needs of the growing number of children in the nation’s public schools whose first language was not English.’[13] Sen. Ralph Yarborough (D-TX) had devised the BEA as a means of winning political support from Mexican Americans and to address the educational underperformance of Spanish speaking children.[14] But this seemingly uncontroversial bill unsettled the racial kaleidoscope in Arizona.

The question of bilingualism in schools was, for many Mexican Americans, one part of a larger political agenda that challenged the nature of Arizonan society and its racial hierarchy. Following the enactment of the BEA, Arizona legislators took up the issue and began devising a state version of the bill. One group of activists sought a more thorough revision of the State constitution ‘to overcome Anglo and English language bias.’[15] They argued that the treaty of Guadalupe Hidalgo (1848) had promised Mexican heritage citizens a true bilingual and bicultural society that had been denied to them by Anglo politicians.

The BEA, and equivalent state legislation, signified a successful, if small, challenge to a racial state that had marginalized Spanish speakers for almost a century.  But these changes were contested. The late 1960s conflicts over bilingual education were just one point in the jagged trajectory of progress for Latinos in the United States. The acquisition of new rights was often accompanied by the removal of others and a coarsening of public discourse about the place of Latinos in American society. The language question, imbued with others about who belongs within the nation and what claims they have on the state, re-emerged vociferously in the English Only initiatives of the 1980s.

Donald J. Trump launched his campaign for the presidency by positing that criminality and sexual violence were the only contributions of Mexican immigrants to U.S. society. On September 16, 2015, in a debate between candidates for the Republic presidential nomination, Trump explained his disapproval of the use of Spanish in public. ‘This is a country where we speak English not Spanish’, he stated, to assimilate ‘you have to speak English’. That Trump could be elected president on a platform of overtly anti-Mexican and anti-immigrant sentiments shows that longstanding conflicts over the use of Spanish and the assimilation of Latinos remain unresolved.

[1] I use the words ‘white’ and the more regionally specific ‘Anglo’ fluidly. Anglo is conventionally understood to mean an individual of Caucasian descent. I also use ‘Latino’ interchangeably with ‘Mexican American’ since in Arizona Latinos were predominantly of Mexican origin.

[15] The Report and Findings of the Arizona Statewide Consultation on Mexican-American Concerns, 13/01/1968. Chicano Research Collection Small Manuscripts. ME CHI 338.

Michael O’Donnell is a third year PhD candidate at Sheffield Hallam University. His thesis examines political conflicts over race and education in Arizona between 1965 – 1988. He can be contacted at Michael.Odonnell@student.shu.ac.uk
View all posts by Michael O’Donnell →
Tagged  C20, C21, Civil Rights, Education, History, Latinos, Politics, Race.
Bookmark the permalink.