Katherine Anne Porter: The Travel and Fiction of a “Roving Spirit”

This blog series focused on American women writers, a partnership between The Society for the Study of American Women Writers and U.S. Studies Online, explores the field through several lenses that range from recovery to religion and from war to transnationalism. By no means comprehensive in scope, this series of nine posts by SSAWW members offers snapshots into the field and its on-going conversations. Liz DePriest in the seventh post in the series trains our eyes on Katherine Ann Porter’s letters to explore the transnational influences apparent in her writing.

When American writer Katherine Anne Porter’s Collected Stories was published in 1965, she became the first woman to win the National Book Award for fiction and was awarded the Pulitzer Prize for fiction, as well. While her literary reputation rests largely upon the stories included in that volume, which date back to 1922, Porter also regularly published book reviews, poems, non-fiction articles, and essays. Her only novel, Ship of Fools, was an immediate bestseller in 1962. Scholarly attention to Porter’s work has solidified her status as an authoritative voice of the American South, where she was born in 1890, and as an insightful observer of Mexico, where she lived for extended periods in the 1920s and early 1930s. Little critical attention has been paid, however, to how her work was influenced by the extensive domestic and international travels she undertook during the four decades in which most of her fiction was written. In her interview for The Paris Review’s “The Art of Fiction” feature in 1963, Porter suggested she “was always restless, always a roving spirit” who told her father around age six, “I want to go and see the world. I want to know the world like the palm of my hand.” The striking extent to which Porter achieved this early ambition is documented by her family correspondence, which the University of Maryland Libraries’ Katherine Anne Porter Correspondence Project will make publicly available online in 2015. The publication of these letters invites and facilitates further study of the reasons Porter traveled, the conditions under which she wrote, and the ways her fiction was shaped by her “roving spirit” and her travels.

Readers have long been interested in the personal correspondence of American women writers, and web publication allows users to access more letters and to view digital surrogates of the originals. The two print editions of Porter’s letters edited by Isabel Bayley and Darlene Harbour Unrue place her among other writers whose correspondence has garnered considerable attention, including Flannery O’Connor, Edith Wharton, Eudora Welty, and Willa Cather, whose complete letters will also be released on the web. The University of Maryland Libraries is preparing publish online over 5,000 pages of letters Porter wrote to her family members between 1912 and 1977. The most frequent recipients include her father, her siblings, her favorite niece and nephew, and two of her husbands. The wide scope of Porter’s family letters provides extensive documentation of her travels. Porter corresponded from different cities in at least thirteen U.S. states as well as from Bermuda, Belgium, France, Germany, Italy, Mexico, and Switzerland. She wrote about her attitudes toward the places she visited and often included detailed descriptions of the people she encountered and events she witnessed. Porter also provided a wide variety of reasons for the frequency of her travel, including her desire to visit new places, her preference for writing in seclusion, her attempts to protect her health, and her financial reliance upon paid appearances and residencies. 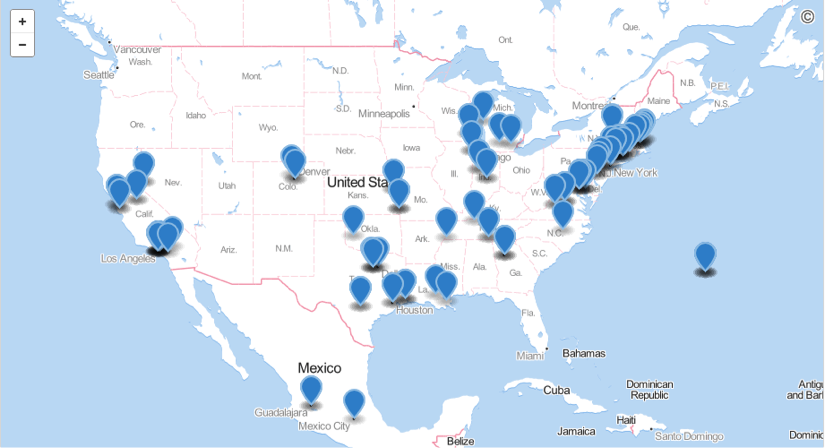 The pins on this map indicate all of the North American locations from which Porter sent the letters included in the collection. Darker shadows indicate that multiple locations have been combined under a single pin. Map included courtesy of Trevor Muñoz, University of Maryland Libraries.

The influences of Porter’s own “roving spirit” are recognizable in her fiction as well as in her descriptions of her travels. Miranda, the autobiographically informed protagonist of “Old Mortality” (1937), flees her Southern home as a teenager to elope. As the short novel comes to a close, Miranda resolves to leave her family again, thinking she “knew now why she had run away to marriage, and she knew that she was going to run away from marriage, and she was not going to stay in any place, with anyone, that threatened to forbid her making her own discoveries, that said ‘No’ to her” (Collected Stories, Harcourt Brace, 220). Porter’s family letters document her own hesitation about returning to the South and her sense that, although she spent her childhood there, she never felt at home in Texas. Between 1928 and 1936, she wrote to her father at least six times that she wished she could visit him in Texas if only she could afford it or could finish her current writing task first. During those seven years, she nonetheless managed to visit and reside in New York City, Bermuda, Mexico, Germany, France, and Switzerland before finally visiting Texas in the spring of 1936. In a letter to her father written in 1932, Porter documents her conflicted feelings about the state. She writes that she “hated it” and remembers “all too well the reasons I left there,” but she hopes that she “could be cheerful there now with my family” during an extended visit. She also references her own departure, indicating “I never felt at home in the world, or as if I would ever find a place in it” (KAP to Harrison Boone Porter, 7 June 1932). 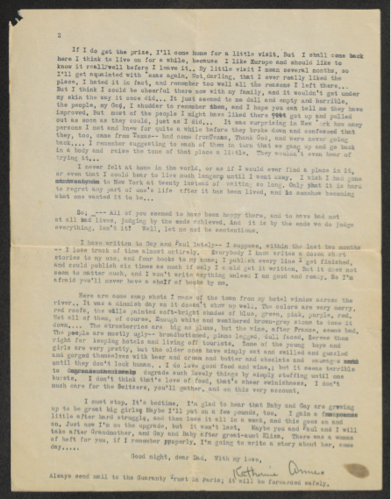 Indeed, Porter’s letters reveal that while she believed growing up in the American South shaped her profoundly, her attitude toward the region was always complicated and conflicted. Her feelings about the South are also documented in many of the letters she sent to her beloved older sister, Gay, who remained in Texas while Porter traveled nationally and internationally.

In some cases, Porter’s travels were motivated by her desire to focus on her work. In late 1936, she spent about two months living at the Water Wheel Tavern outside Doylestown, Pennsylvania, so she could write in isolation. She was unusually productive there, completing the manuscripts of “Old Mortality” and “Noon Wine” and working on “Pale Horse, Pale Rider.” The daily letters Porter wrote to her husband at the time, Eugene Pressly, indicate that while she was writing fiction set in the American South, Porter was deeply attuned to her rural Pennsylvanian surroundings. Her letters describe her writing progress as well as her detailed impressions of the inn, its proprietors, her fellow boarders, and the surrounding countryside. Only a few days into her stay, Porter writes Pressly, “After writing a murder scene last evening and this morning, I suddenly played hookey for the afternoon” in order to visit properties in the area (KAP to Eugene Pressly, 4 November 1936). A few days later, Porter’s mind is preoccupied by the change in atmosphere brought on by the opening of hunting season. She describes the environment to Pressly, admits that she finds “such merry bloodthirst at once exciting and depressing,” and suggests “the heavy bombardment in the fields distracts me a little” (KAP to Eugene Pressly, 6 November 1936). 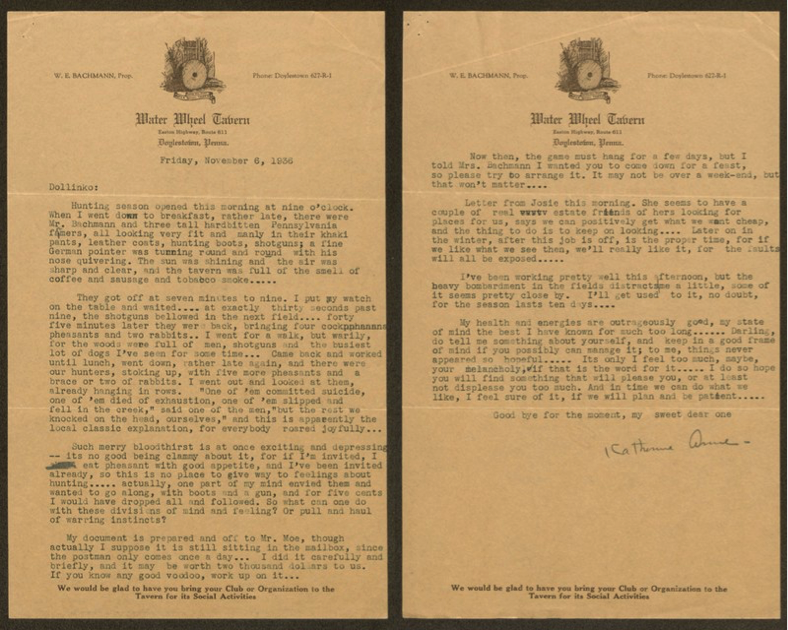 The letters Porter wrote to Pressly from Doylestown also reveal that for her, details such as the ones she includes in her letters are not minor. She writes, “if [details] bored me, I could never be a writer…… details are important. They decide the shape of the finished job” (KAP to Eugene Pressly, 4 November 1936). Given her thorough attention to the details of her surroundings, these letters invite analysis into how “the finished job” of two of Porter’s most widely read pieces of short fiction was shaped not only by her childhood in the American South but also by her residence at the Water Wheel Tavern during their composition.

In the late 1940s and 1950s, many of Porter’s travels resulted from her reliance upon paid teaching residencies and public speaking engagements across the country. Her correspondence shows that while she believed these paid appointments interfered with her ability to write, she continued to accept them anyway and was at least initially enamored with many of the places she visited. She writes to her family friend, for example, “maybe I would do more writing if I stayed at home more and didn’t go off lecturing and reading in colleges and Universities. But it is interesting and I enjoy it” (KAP to Cora Posey, 21 October 1952). Though she often read from and published excerpts of her novel-in-progress during this period, she did not complete Ship of Fools until 1961.

Porter’s first impressions of the University of Michigan, where she arrived in September 1953 to serve as a writer-in-residence, indicate that, in addition to the pay, Porter enjoyed the opportunities these appointments gave her to interact with students and admirers of her work. On the first postcard she wrote to her nephew Paul from Ann Arbor, Porter writes favorably about her residence, calling it “the first time I have been comfortable in 6 years!” The warm welcome she received from her hosts seems to have made as favorable an impression upon her as the accommodations. On a second postcard sent the same day, she describes the office in which “I shall go on misleading the young into thinking serious literature is fun!” (KAP to Paul Porter, Jr., 16 September 1953). This example of Porter’s trademark wit acknowledges that teaching is rigorous but also suggests she is enthusiastic about taking it on. 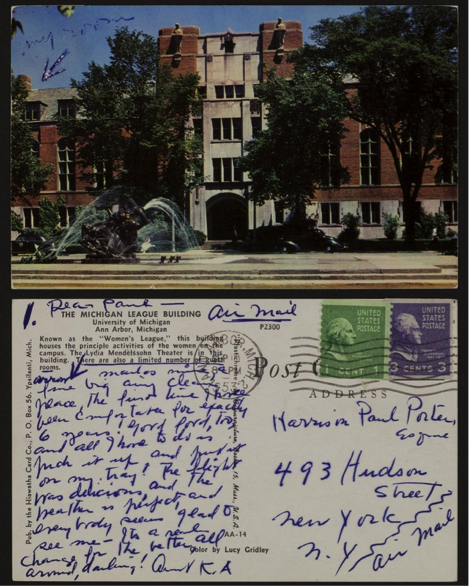 These residencies may have slowed Porter’s progress in composing Ship of Fools, but her extensive domestic and international travels also gave her a broad set of sources for her fiction. While Ship of Fools is based largely upon her transatlantic voyage in 1931, it features characters who hail from many of the countries Porter visited personally between that voyage and the novel’s publication thirty years later, including Mexico, Germany, Spain, Switzerland, and different areas of the United States. In the interview for The Paris Review, Porter said, regarding literary influence, that “the truth is, I have never written a story in my life that didn’t have a very firm foundation in actual human experience—somebody else’s experience quite often, but an experience that became my own by hearing the story, by witnessing the thing, by hearing just a word perhaps.” The stories Katherine Anne Porter heard and the things she witnessed transpired not only in the American South and in Mexico, but also across the United States and Europe. The online publication of her family correspondence will provide the public with untold insights into her “roving spirit” and the ways her travels shaped the work she composed all around the world.

Liz DePriest is a PhD candidate in the English Department at the University of Maryland. Her dissertation, titled Reproductive Modernism, examines issues of reproduction and maternity in American women's modernist fiction. This project includes a chapter on Katherine Anne Porter, which has been enhanced by her work as a graduate assistant for the Katherine Anne Porter Correspondence Project.
View all posts by Liz DePriest →
Tagged  C20, Cultural History, Gender and Sexuality, Transatlantic, Transnationalism, Women's Writing.
Bookmark the permalink.