I thought I would be writing a very different press release. Julian Bond, advisory board member of the Centre for Research in Race and Rights at the University of Nottingham, had been in contact a lot over the last week as we finalised the details of his next visit to the UK with his wife Pamela Horowitz. He died on Saturday night suddenly and after a short illness. He was 75. Julian Bond would have been at the celebratory centre of my British Academy-sponsored conference on Civil Rights Documentary Cinema and the 1960s: Transatlantic Conversations on History, Race and Rights. Julian Bond embodied the conference theme, as a co-founder of the Student Nonviolent Coordinating Committee and SNCC’s Communications Director from 1961-66. During his long and stellar career he was consulted on and he acted as narrator for a number of civil rights films, notably Eyes on the Prize the documentary series which forged a new understanding of the civil rights movement for scholars and public alike in the 1980s. 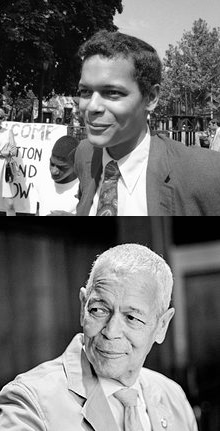 Instead, the conference will take place in his honour and in his memory.

Activist, Politician, Lawyer, Writer, Poet and Educator, Julian Bond’s social activism and his long-standing service included roles such as Chairman of the National Association for the Advancement of Colored People (NAACP), the oldest civil rights organisation in America from 1998 to 2010. He had been elected to the Georgia House of Representatives after the Civil Rights Act in 1964 and the Voting Rights Act of 1965 and was re-elected to the Georgia Senate for some 20 years. Bond was the first President of the Southern Poverty Law Centre founded by Morris Dees in 1971 and the Centre’s tribute sums up what Julian Bond has been to so many: “We’ve lost a champion… With Julian’s passing, the country has lost one of its most passionate and eloquent voices for the cause of justice. He advocated not just for African Americans, but for every group, indeed every person subject to oppression and discrimination, because he recognized the common humanity in us all.” President Obama called Julian Bond a hero.

Last week, in the days before he fell ill, we were emailing about our favourite stories by Arthur Ransome; we had read the Swallows and Amazons tales as children and last time I met Julian Bond it was what we talked about. Yesterday I was re-reading Peter Duck because he had just said it was one of his favourites and I couldn’t remember it at all. It was a nice way to spend a couple of hours on Sunday afternoon. And then the news came. The epigraph from Robert Laurence Binyon with which the novel opens has taken on a different hue now Julian Bond has died:

He turns his head, but in his ear
The steady trade-winds run
And in his eye the endless waves
Ride on into the sun.

Who’s Got the Power: Big Decisions Ahead of Super Tuesday
“I’d Rather Vote for a Tuna Fish Sandwich”: Never Trumpers and the 2020 Presidential Election
Exploring the French Caribbean and Joseph Zobel
R&B entertainers didn't take too long to get involved in the civil rights movement
I am Fatima: Negotiating Identities in Contemporary American-Muslim Women's Writing
Merging aesthetics and politics: Toni Morrison’s jazz affect in JAZZ (1992)
The Cold War and the Origins of US Democracy Promotion
Book Review: The American Weird: Concept and Medium edited by Julius Greeve and Florian Zappe

Sharon Monteith is Professor of American Studies at the University of Nottingham and Co-Director of the Centre for Research in Race and Rights. She is completing SNCC's Stories: Narrative Culture and the Southern Freedom Struggle of the 1960s for the University of Georgia Press and and writing The Civil Rights Movement: A Literary History for Cambridge University Press.
View all posts by Sharon Monteith →
Tagged  African American Culture, Black History, C20, C21, Civil Rights, Obama.
Bookmark the permalink.